Risk taking at the bleeding edge

As a child of the '80s, I was utterly captivated by cinema. I spent hours in my local Blockbuster poring over the aisles of cover art, and can to this day recite Disney's Aladdin from the opening sequence to the credits. But for all their cultural appeal, films didn't come close to the alchemy and utter immersion of 8-bit video games.

From my childhood bedroom in rural Australia, games were a portal to other worlds—from the circuits of Monaco, to the dungeons of hell, and eventually to the metropolis of design in the year 2021. This impossible multi-sensory participation theater—crude as it was—bewitched my adolescent brain, and set in motion a 30-year romance with human-machine interaction.

We all have our muses. Traditional television advertising has been inspired by, and has inspired, films for decades. Technology, technique, and taste spill from one to the other, in an exchange of ideas that advance the medium. Art pushes the canvas forward. And the same can be said for the impact of video games on experience design (XD). They're siblings. One holds the power to conjure new worlds, and the other can enhance the way we experience the one we have.

Games have lived on the coalface of user interfaces for a solid half-century. Command and response. Point and click. Tap and swipe. Gesture and speak. From this rich tapestry of experimentation emerged a constant stream of new paradigms that also helped to make complex real-world tasks more intuitive, accessible, and delightfully satisfying. They taught us to dance, and pioneered the thinking behind the choreography. In many ways games became the sandbox that introduced a generation to a rewarding relationship with our tech.

This relationship gave us a common language, shared mental models, and learned behaviors that taught me the value of head and heart in the craft. And it's evident in my work, from early mobile fitness apps (Nike Bootcamp, Nike Training Club) to gamified reward programs (Verizon Up)—when we're designing at the intersection of business, culture, and technology, we have to balance our book smarts with our Mario Karts to get somewhere worth going.

Today, our broadcasts watch, our speakers listen, and our cars drive us—as the arenas of fantasy and reality converge in spectacular fashion. At Huge, we have the good fortune to work with great partners like Google, PlayStation, Riot Games, and Unreal at a time when live concerts unite virtual battlegrounds, digital currencies disrupt real markets, and vehicles (like the new Hummer EV) literally operate on a game engine and leverage it for virtualized film production. The possibilities are endless, and yet the defiant leaps and rabid experimentation once synonymous with the design industry have been more measured in recent years.

A client once said to me, "You can't scare me with big ideas, but you can bore me [in their absence]," which—in the context of the brief—was a masterclass in expectation setting. Sure, there are business objectives and practicalities—and we take our ethical responsibilities incredibly seriously—but what good is it being at the bleeding edge if you're going to pull your punches? Let's not mistake patterns for progress, as timid emulation and incremental plus-ones will only take us so far. As the stakes get bigger and the medium(s) more pervasive, the real risk is that the risk-taking gets optimized out of the equation. The game industry isn't immune to this—I'm looking at you, Assassin's Creed 12—and neither are we.

So invest in your curiosity and remember that maverick should be the default setting. We all have to venture outside the echo chamber of what we know, if we hope to create what comes next. 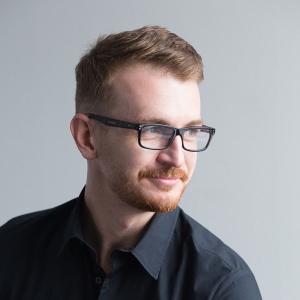