Cool Logo. What Else You Got?

Visual branding as a service, not a stamp

Recently, our firm replied to a media query asking, "How to decide if you need a logomark or a logotype." You know, because one's got a picture and the other's just a fancy-looking word. Decisions!

We get this hotly debated question from time to time. But logo is otherwise not a word that comes up a lot for us these days, in any of its forms. Logos still play a role, but they aren't really at the heart of branding. On a related note, our answer didn't get published.

For us, the old Greek word logo shows up in a sub-bullet point in some of our proposals, in the context of terms like "identity," "signature visuals" or "special moves." Maybe those sound like fancy-pants brand agency words, but they're actually more humbly descriptive of what you probably need. The way we think about brands has only a little bit to do with stamping your mark and type all over creation.

The word logo makes us think of literally branding unsuspecting cattle, or rock stars scribbling their signature with a Sharpie across groupies. It makes us think of the 10,000 times we've heard "Make the logo bigger!" (Granted, 9,000 of those were voluntary replays of the old viral video.) There are some great logos, of course. But that doesn't mean the goal is to conceive them to stamp on every available space.

There are few rules when it comes to visual branding—as soon as you make it, there's opportunity in simply breaking it. An aspiring shoe company may think they need a swoosh to compete with Nike, but they may also want to spell their name out in big block letters to truly stand out, like Supreme. It's not wrong to simply follow inspiration and intuition on this. But the one rule there is is, it's not about you.

What matters today is less about logo recognition on store shelves, and more about visual patterns and where they interact with customers. Don't think of your logo as the company equivalent of a dog marking its territory. Think of a logo, or any other visual (or audio or olfactory device, for that matter), as a sort of SERVICE. It adds value, it looks cool, it makes lives easy, it's FUN, it's helpful, it's distinctive or subtle or stylish. It adds to and reinforces the experience. It's associated with moments in time, not just taking up space.

Some of the most iconic visual signatures aren't logos at all—they distinguish themselves in the flow of people's lives. For every Nike swoosh logomark, there's a brand like Coke or Google that hits home with the shape of a bottle or the look of the search window. And almost all brands have short forms now for use in places like phone screens. Very often, visual signatures emerge as you think through where and when to apply them during the customer experience.

Visual brand assets help consumers identify and associate. Deciding between a mark or type approach isn't really going to help you figure out how to be distinctive in context. What wins is starting with understanding where customers will encounter your brand, and what feels right in those places. Sometimes, the name demands a mark. Or a context like a UI, a clothing article, or signage will suggest it. It may suggest itself organically in ways that relate to unique brand experiences.

Viewed like this, you may start to think of logos as signatures. Sure, logomarks and logotypes still describe things. But if you need to own something, shoot for those periods in time when a person comes in contact with signature evidence that your brand exists to give them something. Working through actual touchpoints and context is the best way to decide how to get identity into the mix in all its forms, and maybe add value to your product while you're at it. 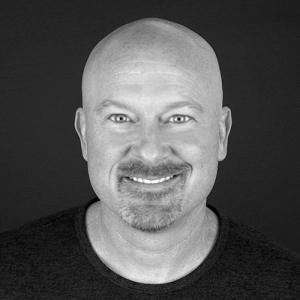