Her creative inspirations, from Warhol to HBO

Is there anything Georgie Greville can't do?

Having grown up in Australia, Singapore, London, New York and Boston, she embarked on a creative career that was just as varied—as a writer, creative director, filmmaker, entrepreneur and more.

Along the way, she wrote and directed MTV promos; founded production company LEGS; created high-energy short films for Rag & Bone, crafted Evian's avant-garde "Baby Inside" spot; teamed with British designer Gareth Pugh on a compelling, large-scale fashion film installation; and spearheaded acclaimed music videos for artists such as Selena Gomez, Flo Rida, Goldfrapp and Florence + The Machine (the latter's "Dog Days Are Over" was nominated for a VMA award).

Repped for commercial work by Prettybird, Greville also co-founded Milk Makeup, where, as creative director, she is helping to redefine conventional beauty standards with a brand that embraces individuality and authenticity.

We spent two minutes with Georgie—who was also a judge for this year's Clio Fashion & Beauty Awards—to learn more about her background, her creative inspirations, and recent work she's admired. 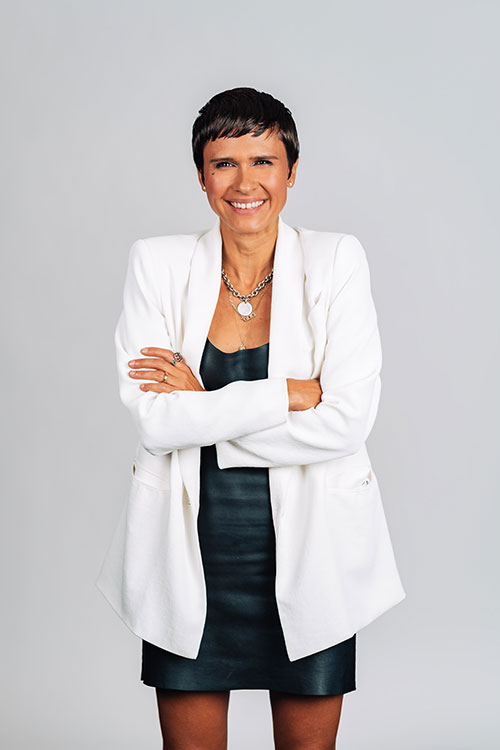 Growing up overseas, I was always out in nature creating make-believe fairy worlds. I lived in my head.

Andy Warhol. I was fascinated by The Factory era and loved that he mixed high with low brow, pop with intellectual.

In college, I tore my ACL competing in a national women's snowboarding competition and made the decision to start working on films in NYC as soon as possible.

The Cure at a big stadium show in Massachusetts. I cosplayed goth with my friend.

I am into all the Hindu Goddesses.

Branding Milk Makeup because we were able to infuse progressive modern values into every side of brand, from using clean ingredients and vegan, cruelty-free formulas to our leading stance on inclusivity and active philanthropic support for the LGBTQIA+ community.

I loved working on the video portraits for HBO's The Inspiration Room with the creative team at Wieden + Kennedy. It such a powerful, well thought out project for Women's History Month, and I was able to direct world-class actors like Susie Essman, Poorna Jagannathan and Margarita Levieva performing real women's diary entries from the hysterically funny to the heartbreaking.

Terence Nance's show Random Acts of Flyness. I love mixed media formats that mimic the stream of consciousness flow of our minds.

Euphoria is a masterpiece—every part of it was so well executed. I am also still haunted by the brilliance of Iñárritu's Birdman.

My beautiful sunshine beam of a son!

I am really keen to direct a playful, socially progressive TV show and start a biodynamic farm.