His creative obsessions, from Burger King to Aviation Gin

Taylor also logged time at Fallon, GSD&M and Energy BBDO, where he was chief creative officer. He joined Mering as CCO in early 2019 after four years as a consultant and freelancer. He is based in San Diego; the agency also has an office in Sacramento.

We spent two minutes with Mark to learn more about his background, his creative inspirations and recent work he's admired. 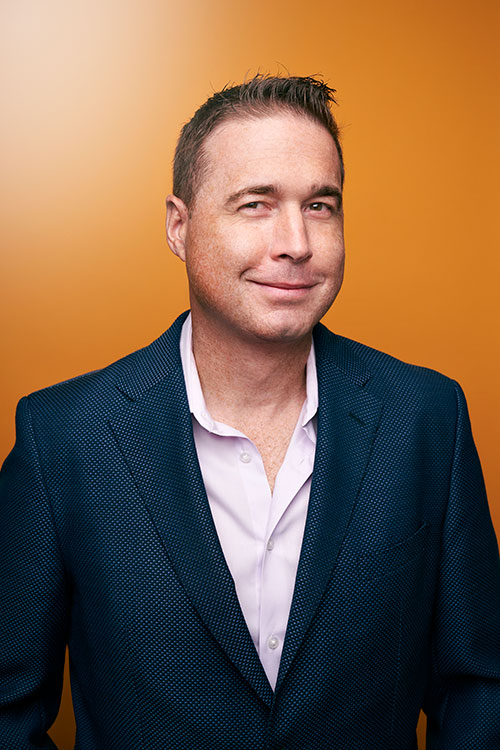 I was born in Columbia, Missouri, but spent my childhood in Bozeman, Montana.

Like pretty much every other Little Leaguer, I had a dream to make it as a pitcher in the big leagues. I ultimately played in college, but the professional baseball career just wasn't in the cards. *Sigh*

I had artistic talent at a young age and focused on developing that skillset throughout my childhood, which included everything from playing the violin to painting. Then I discovered comics around 4th or 5th grade and became passionate about drawing cartoons. I think it was the first time I was drawn—pun intended—to the notion of a creative idea, and the practice of communicating it in an entertaining way.

Gary Larson, creator of The Far Side.

The moment I discovered advertising in college. I had been majoring in graphic design, but I didn't love it. I pursued an education in the arts, but it wasn't until I switched to advertising coursework that I became truly passionate. Art alone I felt had no purpose. But advertising had an objective, and I fell in love with developing concepts.

When you grow up in Bozeman, there's not a lot of mainstream acts that come your way. But when I was a junior in high school, my favorite band at the time, Poison, came to town. Back then, they were the shit. They played in the Brick Breeden Fieldhouse at Montana State University, which was a large, mixed-use track and field/basketball stadium. They stuffed about 12,000 people onto the floor, void of chairs and other safety precautions. It was the biggest mosh pit I've ever been in.

My favorite current band, however, is Band of Horses. I have mellowed out in my older years.

My favorite solo artist is Bruce Springsteen because of the depth of his storytelling and personalization in his music. There aren't many musicians who are as accomplished and prolific. And he has been at it for nearly 50 years—and is still relevant and going strong, by the way. He somehow finds a way to reinvent himself through each iteration, and each album, never really doing the same thing twice. As a performer, he can command the full attention of every venue, whether it is on Broadway or in a stadium, connecting with his audience for as long as four hours without a single break.

My daughter. Don't tell her.

In 2004, after winning the Burger King account at CP+B, we were given a TV brief to launch a new breakfast sandwich. The challenge was twofold: Introduce the product, but in a way that McDonald's wouldn't get the credit, as they completely owned the breakfast space in the fast-food category.

The idea: "Wake Up with the King." We brought back the King—a reimagined version of him—who waited patiently in bed for an unsuspecting guy to wake up so he could present him with the new breakfast sandwich.

Burger King | Wake Up with the King

The commercial, and the King, quickly gained widespread attention for one main reason—he freaked people out. We gave him a big plastic head with a leering smile—sculpted in the likeness of my copywriting partner Bob Cianfrone. But it was the fact that we elevated the subject matter to PG-13 that did the trick. People were used to seeing brand icons treated in a G-rated manner, so when we made him more edgy, it was jarring. And it helped craft his well-meaning yet slightly aloof personality in a hilarious way.

From there, the King took off. He made a legit, non-paid guest appearance on The Tonight Show with Jay Leno. We arranged a celebrity love affair with Brooke Burke, which played out in the tabloids. And we followed up with dozens of other commercials and promotional appearances in the years to come. The Burger King account has since traded hands, and it's been over 15 years since that fateful morning in bed, but the King still lives on. Which is about as rewarding as it gets in this business.

I've long admired the Visit California work done over the years by my new agency, Mering. And when I came aboard earlier this year, I was excited to work on the brand. The road trip to many is a rite of passage. And with 400,000 miles of roadways, 840 miles of coastline, historic landmarks and monuments, hidden gems and hot spots, no place can own it more than the state of California. From the Pacific Coast Highway to San Francisco, our 45-second "Born to Be Wild" spot explores it all, from Big Bear to the snow-capped mountains in Shasta Cascade.

Visit California | Born to Be Wild

Someone else's creative project that inspired you, years ago.

Ogilvy Brazil's "Immortal Fans" for Sport Club Recife. This campaign won the Grand Clio in Clio Health as well as the Cannes Grand Pix for Promo in 2013. In my opinion, work that creates genuine consumer participation is the holy grail of marketing and creative solutions. And this did it in spades. The power of this idea moved a community that didn't often practice organ donorship to champion the cause, all by associating it with something they truly cared about. Their football club. By aligning donorship with their football club, members of the community could donate their organs to continue beating, cheering and watching their beloved team after they had passed.

I absolutely love the work being done for Aviation Gin. It might have something to do with my man crush on Ryan Reynolds, but it's some of the smartest, bravest, most culture-shaping stuff out there.

There's two things I love about it: 1) it is innovative, even within a traditional medium, and 2) each piece grabs an oversized share of PR attention. From "Dedication," a hilarious spot that ponders the question of whether one can ever go too far for their company, and features an approving Andy King cameo of Fyre Festival lore—you'll want to look that one up—to the ad within an ad within an ad for Netflix/Aviation/Samsung, which turned the practice of brand partnerships on its head. And finally, the now-famous Peloton sequel, which broke the fourth—er, fifth?—wall and used the actress to poke fun at her own Peloton commercial, along with the rest of us. It's the most jealous I've been of someone else's work in a long time.

The belief that there is a great solution for every single marketing challenge.

Schmoozing. I'm not a natural extrovert, but I'm doing better in that area—thanks to my wife.

My family. My wife Adrienne and my kids, Alyssa and Austin. But I would be remiss if I didn't also include tennis and martinis.

The constant political discord that is at fever pitch.

I honestly can't imagine doing anything else. But since I'm obliged to answer, I would likely be a teacher at one of the collegiate advertising programs, or make the transition into directing.