His creative loves, from Madonna to 'Meet the Superhumans'

Merrill's collaborations with photographers have won awards from PDN, AOP, Creative Review, Graphis and the Taylor Wessing Photographic Portrait Prize at London's National Gallery. His work has appeared in campaigns for clients such as Sony, IBM, HSBC, Nokia, and Coca-Cola.

Prior to joining Getty Images, Guy studied culture and communication at NYU and worked in trend forecasting, as well as film and television in New York.

We spent two minutes with Merrill to learn more about his background, his creative inspirations and recent work he's admired. 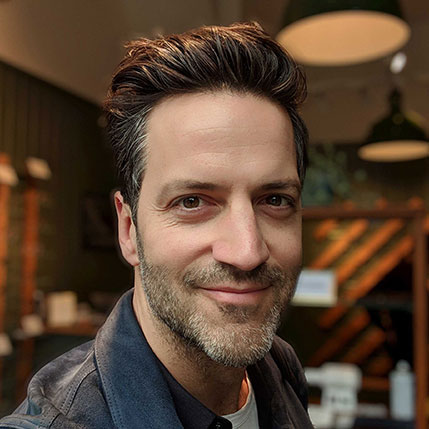 I grew up in the 'burbs of the bright lights of Albany, upstate New York. My parents are still there. And I have a strong connection to Troy, N.Y., where a lot of my extended family are. Troy is one of the many long-ignored post-industrial towns in America, and it's so heartening to see how it's changed in the last few years. It's got some amazing architecture which is slowly being restored, and they have a fantastic farmer's market and food scene now. Never thought I'd be buying kimchi and artisanal cheese in upstate New York.

It was always changing. All I knew is I wanted to be in a creative environment. I could swing between wanting to be an actor, a designer, a gallerist, a writer—I was drawn to the idea of a cosmopolitan lifestyle.

When I was about 10, we had to write an essay about where you picture yourself in the future. I drew a picture of myself living in Paris, wearing a sharp suit, standing in front of the Eiffel Tower. For a kid from suburban upstate New York, that kind of says it all. The vision isn't too far from today's reality, albeit I'm standing in front of Poundland on Camden High Street in London.

I didn't really consider myself "creative" for a long, long time. I knew that creativity, imagination, design, taste and style were important to me—but didn't think that made me a creative person, because I didn't tangibly make or create things. Despite being into literature, photography, art, film and music, I didn't fit the stereotypical mold of the rebellious, creative archetype. I considered my fine artist friends to be the "creative" ones—they smoked clove cigarettes and dyed their hair punky colors (it was the '90s). I was an uptight, preppy gay kid, and there was no roadmap for what the future held for me. It was only much later in life that I discovered that creativity comes in so many different forms—not just the outsider genius—and that my interests so clearly lie in the creative world, so it only made sense to end up in a creative role.

It's so hard to put that onto one person. But speaking honestly, it would have to be Madonna. As a child of the '80s and '90s, MTV dramatically shaped my fascination with culture—both high and low!—and the world beyond my small town. The oeuvre of Madonna—yes, I said oeuvre; Google it!—exposed me to different kinds of people, different ways of being, styles, cultures, the works. Before social media, there was so little way to understand or see the world beyond your hometown—we forget that now. It wasn't just her music but her fashion and style, her music videos, her live performances; they genuinely shaped and broadened my perception of the world, and the possibilities of what was out there beyond the 'burbs (there's that word again). It's no surprise that her fans are so loyal, because there are so many of us who were genuinely shaped by how much she pushed the boundaries.

Not so much a moment, but the first year of college changed my life forever, for sure. I had just turned 18 and moved to New York City to attend NYU and immediately knew I'd made the right decision. Everything felt new and exciting. It was complete sensory overload—students from all over the world, exposure to art, new food experiences, clubs, dancing, drag, live music. I had Japanese food for the first time, I experienced a lot of other … things … for the first time. I'm talking about food, Mom, promise. It was really a magical time.

I saw Paula Abdul with Color Me Bad, of "I Wanna Sex You Up" fame, in 1991. I remember it being pretty disappointing. We were really far away, and she was lip syncing (sorry, Paula). I'm a big music fan. I listen to a lot of Frank Ocean, Robyn, Sza, Kacey Musgraves, Rosalia. My two kids are keeping me up to date, too, with their musical choices—Post Malone, Billie Eilish, Lizzo and Lil Nas X, who is their absolute favorite. Currently we're all obsessed with "Toast" by Koffee. My kids have been asking Alexa for it on repeat. Thank you, Amazon, for bringing music bashing into the modern era.

I've been on a roll. My friend in New York works in publishing and gives me all her recommendations. Some recent favorites are Fleishman Is in Trouble, Educated, The Great Believers, Less and You Think It, I'll Say It. I hope I come across as really cultured here and make up for my earlier Madonna idolization comments?!

It would be a long list of brilliant comedies like Bridesmaids, Muriel's Wedding, Best in Show, Hunt for the Wilderpeople and Paddington 2 (I'm dead serious), with a dash of emotional dramas like The English Patient, Moonlight and The Lives of Others. Oh, and The Matrix.

Off the top of my head I love @raven__smith, @thecut, @sainthoax and @dankartdirectormemes. But currently I'm obsessed with @glennclose. It's like having your mom on Instagram. She's completely unfiltered, goofy and has no vanity. In this world of carefully curated self, her openness really stands out.

I was asked this question earlier this year and came up with a shoot I worked on a long time ago staged to look like an '80s mall photo studio. We did funny '80s-style mocked-up prom photos and corporate headshots. A touch of nostalgia? Complete creative freedom? An ability to envisage an idea and bring it to life? All credible reasons as to why it's one of my faves, but the real reason is probably down to the costuming, particularly the hair and the wigs. The higher the hair, the closer to God.

We've worked on so many projects in the last year aiming to challenge stereotypes and more accurately reflect a visually inclusive world. After all, as we say, "You can't be what you can't see." This work has been incredibly interesting and rewarding. Projects like The Nosotros Collection, which reimagine the visual representation of the Latinx/Hispanic community, for example.

Most of all, though, I'm proud we've amplified this strategy through our giving efforts, where we're awarding emerging photographers, allowing them a leg up into the industry, while also ensuring the continued production of inclusive and positive imagery. We ran a round of Bursaries earlier this year which focused on LGBTQ stories, and we're currently doing the same with Disability communities. Breaking into the industry is tough, so by financially supporting young photographers to pursue powerful creative projects of personal significance, while also building a more inclusive world … well, it's a bit of a double whammy and doesn't get much better than that.

"Meet the Superhumans." It isn't dated at all and is still so powerful.

Our creative team have all been enjoying the new Rudimental music video for "Something About You." It's simple but perfectly executed, and the casting choices are excellent. That or all my son's incredible drawings and ideas for comic books.

I think I have a pretty broad understanding and appreciation of good creative, so I can switch between different styles and approaches, which helps in a role like mine, as our content needs are vast.

Weakness? Defensiveness. 😬 Blind spot? My seemingly laid-back nature, which isn't actually the case. It's just a mask I wear! Although this sometimes serves me well and issues magically disappear.

My kids. RuPaul's Drag Race (even when it's bad). A great meme. Pizza. That's four things, but I've always been an overachiever.

Dog mess on the street. Why?!

What you'd be doing if you weren't in the imagery business.