His inspirations, from Maurice Sendak to John Malkovich

David Moon Ki Lee joined Squarespace in 2013 and leads a team that spearheads all brand creative, visual and product design and creative production for the company.

In that time, he's masterminded five Super Bowl campaigns, including the Emmy-winning John Malkovich spot in 2017, and led the successful launches of Squarespace Logo and Squarespace 7.

David graduated from RISD with a BFA in graphic design. A native of a Quebec, Canada, he now resides in Tribeca with his wife and daughter.

Muse spent two minutes with Lee to learn more about his background, what inspires him, and recent creative work he's admired. 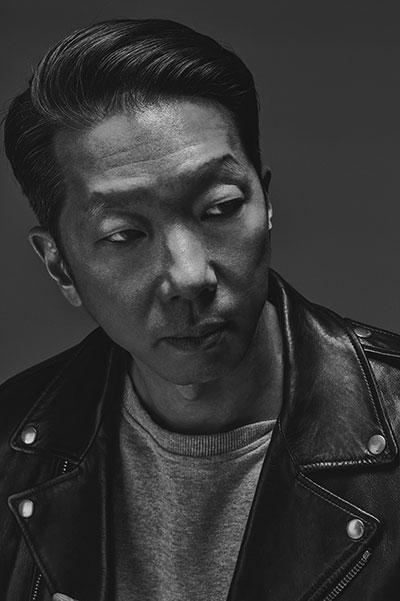 I was born in the heartland of French Canada in a tiny town called Saint-Foy in Quebec, which, as it turns out, ended up getting amalgamated into Quebec City in the early 2000s. Though I was born there, I moved very early to Montréal and consider it home, as most of my childhood memories stem from my time growing up in the suburbs of Montréal.

There were many posters on the wall growing up. I wanted to be a professional skateboarder, an NBA All-Star, a guitar virtuoso, and an artist all at the same time. I think there is a common thread of creativity somewhere in all of these pipe dreams.

I'm not sure I can recall the exact moment when I knew I wanted to do something creative with my life. I was always a very visual kid, but I think the skate culture in the early '90s was the genesis. I loved all the custom artwork of the Powell Peralta and Santa Cruz signature decks. You then get woven into the culture, start reading Thrasher magazine, absorb all the ads from different companies, and all of a sudden you start to understand the importance of a brand. It was the first time I felt I could mix commerce and art together and possibly have a career in doing so.

Too many people to single out just one. Rodney Mullen for the creative expression he brought to skateboarding. MJ the G.O.A.T., who was the definition of poetry in motion in sports. Jimi Hendrix for the raw artistry and sound that one man could produce from six strings.

I always thought I could draw with the best of them. I had just gotten into one of the best design schools in the world, and had to do a foundation drawing class where one of the first projects was to draw a model. I did it in my usual way, feeling very confident in what I had produced. When it was my time to get critiqued, the professor gave me some words of wisdom that I still remember to this day. He said that what I had produced was a stunning representation of what was in front of me. He said it was so realistic that it was, in some way, almost photographic in nature. With my confidence high, I was not expecting his following words. He then went on to say that I should actually major in photography! That it would be much quicker to get to that result than what I just went through. He explained that drawing is not about representing what everyone else sees in front of them; it's about finding the soul and the essence of the subject matter in your own bespoke way. I remember the embarrassment and the feeling I had in my stomach. When I told him I'd been drawing like this my whole life and that it would be hard to change, he told me to simply draw with my left hand for the rest of the class. There was an amazing childlike wonder to drawing with your off hand. It was a way to unpack and relearn how to do something that I had been doing a certain way my whole life. When I feel that I'm getting jaded or on cruise control, I use this memory and the feeling I had in my stomach as a catalyst to try new things.

I remember going big for my first concert and attending Lollapalooza in Montréal in 1994. I remember Smashing Pumpkins, Beastie Boys and George Clinton and the P-Funk All-Stars were headlining the festival. It was a pure sensory overload. I have vivid memories of the energy and the mental and physical anguish put on your body by being in the mosh pit with thousands of people.

Today, I've found myself going back to the old stuff. There's too much music available at your fingertips that I feel I've become less precious about what I listen to. Most of the music blaring in our household tends to cater to our 5-year-old daughter.

The most memorable art experience that I can remember was when I got the chance to visit Marfa and observe how the sculptures of Donald Judd played with the space and environment around it. It's in the middle of nowhere, but a genuinely different experience to seeing art on white walls and sterile environments that we're all used to.

Young Max from Where the Wild Things Are by Maurice Sendak. My favorite illustrated book to read to my daughter.

21 Lessons for the 21st Century, by Yuval Noah Harrari. I read it while visiting Marrakesh, and it provided quite a contrast to what I was visually absorbing from my surroundings. It's a masterclass sitting at the intersection of humanity and technology, and will open up your eyes to the social and political issues as a result of all this innovation.

So many that I can't possibly name one.

I must still be a massive basketball fan because @houseofhighlights seems to always be on my feed, according to the Instagram algorithm.

The work we did with John Malkovich is probably the most iconic creative project I can remember. I got to work closely with John and bring his story to life with a beautiful misdirect short film, which is still one of my favorite pieces that I've had a chance to be part of. We also created a Super Bowl campaign with him, which ended up winning an Emmy Award for best commercial of the year. The fact that this wasn't just a campaign, and that we did all of this for a real passion project of John's, made it even better.

I also have to note that spending some quality time with Keanu Reeves was a very memorable and humbling experience. He's genuinely the nicest man in the business, and a good human being.

We got the chance to work with Idris Elba and Spike Jonze at once. Two individuals that I've always wanted to collaborate with, who partnered to make our latest brand campaign. We got to show the comedic side of Idris, and witness the meticulous preparation, planning and passion of Spike all at the same time. Another one that's hard to top.

Squarespace | Dream It with Idris Elba (Directed by Spike Jonze)

The last project that made me jealous was "The Epic Split" featuring Van Damme for Volvo. It was such a mesmerizing film, shot in one take and a real product demonstration all together. Having Enya in the background just made it all that much better.

"Dream Crazy" from Nike gave me chills when I first saw it. It's classic Nike storytelling, but more importantly, it proves that bravery and confidence in what your brand stands for, and who you stand next to, can drive great business results as well.

Putting the pieces together. I'm a designer by trade, and I've always found that I'm good at making connections and correlations to somewhat disparate things and creating a thread between them.

I have a hard time separating work and life—they almost bleed together. I'm trying to find ways to disconnect from work. I need to put the phone down, turn off all the notifications and alerts, and be more present and in the moment.

When I go weeks without seeing my daughter.

I would try my hand as a professional photographer and find a way to travel the world. There's something powerful and timeless about a singular image. I would love to go deep into the craft and find opportunities that would allow me to go to places that most people don't have access to.