Select Cannabis Tells Its Fun Origin Story, Which Started With a Cough

As CMO, White leads development on the Select brand of oils, gummies and related products. Last week, Select unveiled its first major initiative under his guidance—a two-minute film that serves as a lighthearted but informative introduction to the brand's products and history.

The clip initially focuses on vaping cartridges that use cotton fiber from Japan to ease users' coughing and throat irritation, then touts the quality of Select leaves and oil.

White cast several Cura employees in the film, along with professional actors. Yes, that's really co-founder Cameron Forni. No, that's not his actual ex-roommate whose hacking fits inspired the cartridge. Yes, that's Select's "oil man," svp of supply chain Griff Jones, rocking a natty suit and Stetson. Overall, the troupe exudes an easygoing, familial vibe that feels right for a young brand putting itself out there for the first time.

At Beats, White was known for high-profile fare, including a powerhouse celebration of LeBron James' 2014 return to Cleveland, and "Straight Outta," which that let users stamp their city names on the "Straight Outta Compton" movie logo.

For his current employer, "we're working hard to build a brand-driven demand economy for cannabis," White tells Muse. "Our mission is to legitimize and humanize cannabis usage. The ultimate goal is for people to start walking into dispensaries and asking for Select."

Such name recognition could be key, with marijuana expected to legally generate $13.7 billion in domestic retail sales this year, a figure could more than double by 2023. 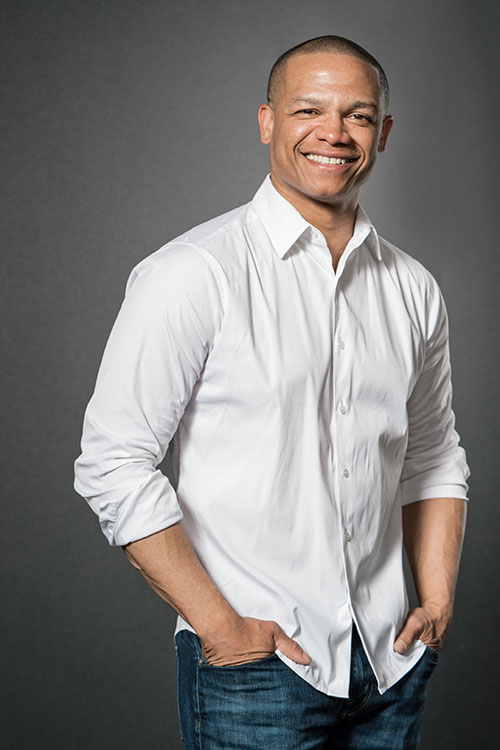 White, who is also a member of the inaugural Clio Cannabis jury—which this month is judging creative work in the burgeoning category—fields additional question below. Our conversation has been edited and condensed.

Muse: Vaping is such a hot topic, as it were, with all those negative headlines. It's so prominent in the film. Was that on purpose?

Jason White: The piece was filmed back in April, and our story remains the same regardless of cultural context. We've always been about quality, testing and all of the things that are more important now than ever before. In light of the serious issues facing the industry today, we emphasize the message of "Vape Responsibly" because we feel, as the leading brand in the category, it is the right thing to do.

So, the film was done mostly in-house?

The film was created outside of the traditional agency model, although it was definitely a Wieden + Kennedy reunion. Almost the entire core Select creative team worked together on Nike. [White spent almost nine years in senior posts at the agency, at one point serving as global account director on Nike.] We got the band back together. Alongside the Select brand team, we worked with two creative directors we love and have worked with in the past—Ryan Gerber and Caleb Jensen—as well as an amazing executive producer named Jen Dennis, to help concept and produce the story of Select.

Where did the idea for the creative approach come from?

We've always wanted to tell the story of Select in video form. We are the best-selling cannabis oil brand in most of the states that we operate in, and we've spent the last five years working hard to earn our place as the recognized leader in the category. But a lot of people still don't know who we are or what we are about. So, a video felt like the right way to tell our story. Our company narrative is simple. It started with a cough, which led to a better cartridge, which led to a better company. This rings true across the entire company today, with our priorities centered around consumers' well-being and the legal production of quality cannabis oil and hardware.

When I started at the company, I saw the tagline "Select Better," and I asked the founders, "What does 'better' mean?" That's when they told me their story. The narrative was always there; we just pulled it out and shaped it creatively. To us, as a company, as a brand, and out of respect for our consumers, "Better" is the relentless pursuit of progress.

At times, it almost feels like a wink-wink spoof of corporate films.

It's not a spoof on any one film, but we did want to tell our founder's story without it feeling like stuffy brand video. We featured real employees—the people who really do the work—and the tongue-in-cheek attitude that permeates across the company came out naturally in the film.

The film will be on our owned channels—selectcannabis.com, @select.better—and will be supported with strategic paid consumer media in recreationally legal states—mostly digital and cinema. We'll also run on endemic media partners like Leafly and High Times.

Who's the target audience?

We focus on two major audience segments at Select, the first being our core consumer. This core audience skews male, is a longtime, loyal cannabis consumer and has loved and supported the brand from day one. The second major audience segment is our growth consumer—this segment skews female, is brand and media savvy, cares about her health and wants to take part in the cannabis revolution. In the cannabis industry, female consumers have been outpacing growth among men year on year, with women purchasers now accounting for 38 percent of the market. We are really excited about this group of cannabis consumers.

Talk about making the spot. Any specific challenges for the crew?

We shot fast and had a ton of fun doing it. We were lucky to be able to bring in a bunch of old Wieden + Kennedy folks, and it felt like family. We trusted one another, and that made all the difference. Being able to bring an incredibly talented and creative group of people together and see them transfer their talents to the cannabis space was fascinating.

How is doing creative for a cannabis company different from creating ads for Beats by Dre?

We have to pay a lot more attention to compliance—about what we can and cannot show—but overall, it felt very familiar. As a creative process, it wasn't that different. It was still about storytelling and communicating simply and clearly. The biggest difference is not working with celebrities, and that was a very intentional choice. Before we decide to align with personalities, we wanted to make sure people understand what we stand for, and make sure [potential endorsers] align with us. The afterparties are also different—they have a lot more cannabis.