See All the Gold Winners From the Inaugural Clio Cannabis Awards

MedMen and Canadian PSAs each win a pair of golds

The first-ever Clio Cannabis Awards were presented Wednesday night in Los Angeles, in partnership with High Times magazine. A total of 25 Clios were awarded—10 golds, four silvers and 11 bronzes. The jury, which reviewed the submitted work on Monday during a day-long session, declined to award a Grand Clio, which is reserved for work that's considered head and shoulders above all other entries.

Other golds went to Puffco and Sweet Grass for product designs; Budder Creative and UTA for brand designs on behalf of Dosist and Houseplant; The BAM Connection for its advocacy work for Keystone Canna Remedies; and Viceland for its Weed Week interstitial videos.

John Salley, the four-time NBA champion and an entrepreneur in the cannabis industry—with his own brand, Deuces22—hosted the awards. 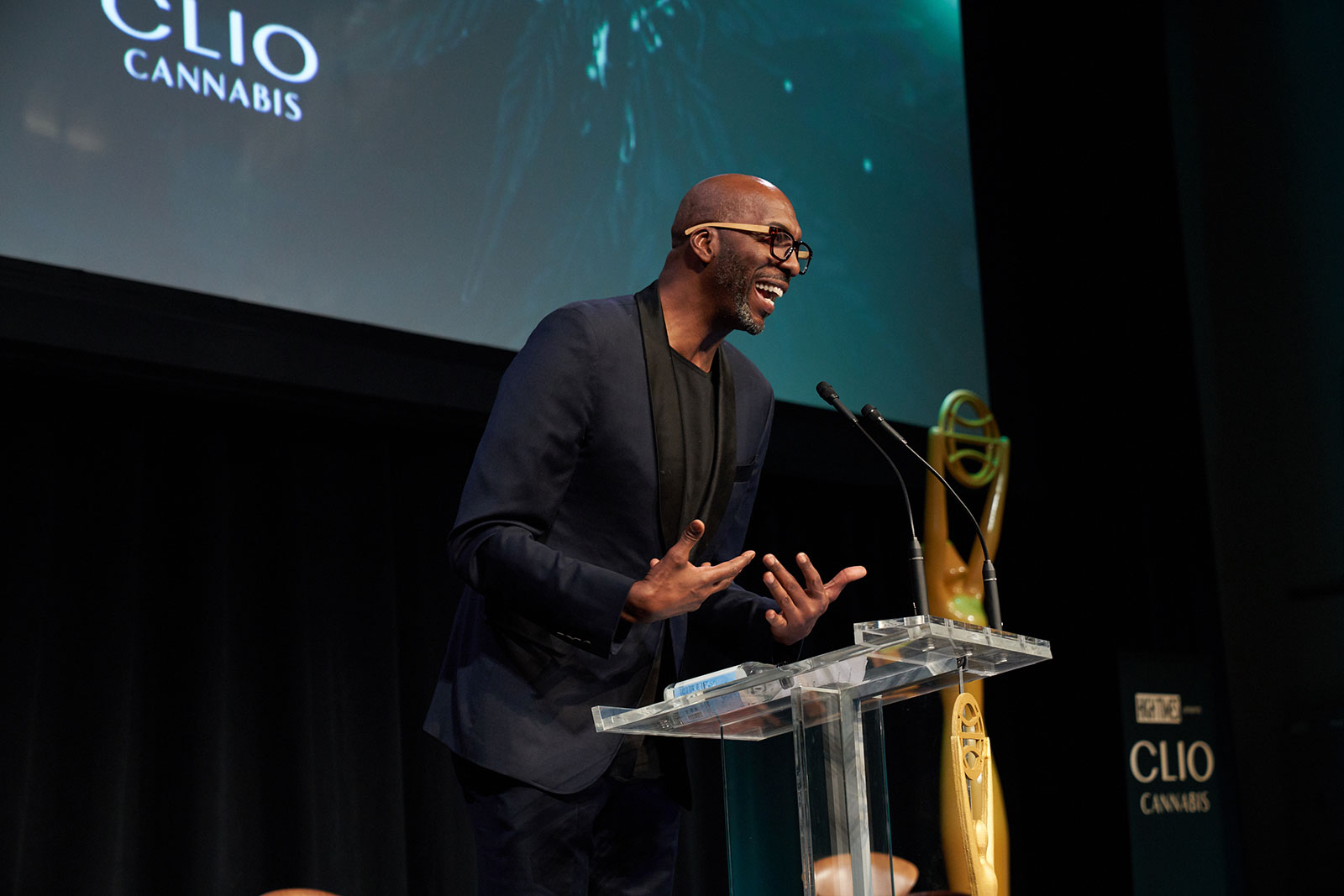 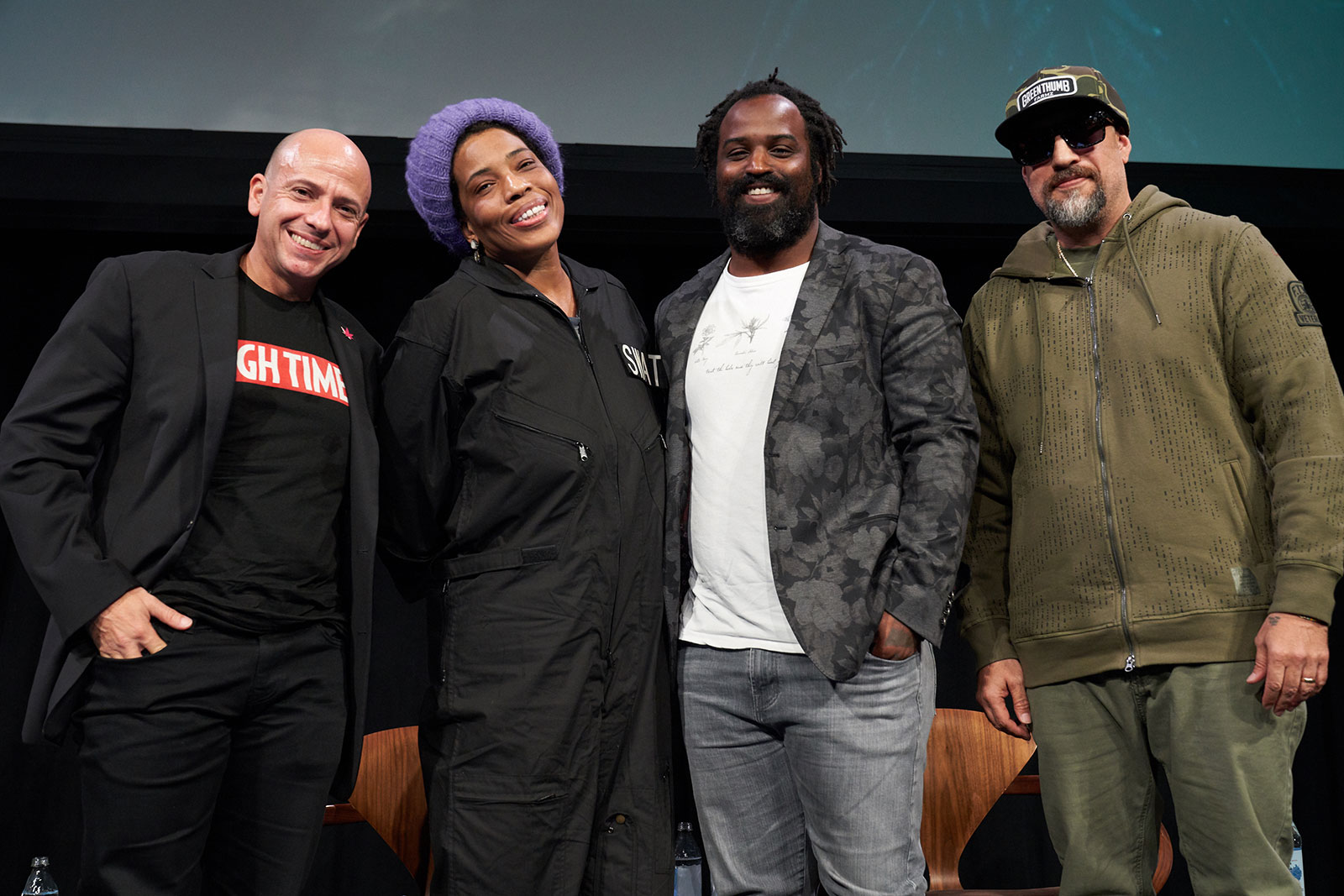 Take a closer look at all the gold winners below. See all the winners—gold, silver, bronze and shortlist—over at the Clio Cannabis website. And for more on the judging process, see this article from High Times.

MedMen, the cannabis dispensary, released "The New Normal" last February. Directed by Spike Jonze and featuring actor Jesse Williams, the spot features a slow-moving trip through America's fraught history with cannabis, styled as a series of museum exhibits. It also likens the illegalization and demonization of cannabis to Prohibition, with consequences just as far-reaching.

"When I read the premise about telling the story of the history of cannabis and our country, there was something that moved me about it. I apologize for using such a 2010s word, but it felt healing to me," Jonze said at the time. "I didn't know much about the specifics of the history, but as I learned about it, I felt like it was a story of a very dysfunctional couple. The relationship started in such a healthy place, with even our Founding Fathers having hemp farms, but it got so tragically messed up in the 80 years of prohibition that we couldn't see straight."

Last November, the Canadian government officially legalized cannabis. But because it is a "soft" drug, young people think there's no danger to smoking cannabis before driving, and that it doesn't impair their judgement. SAAQ, the Quebec government organization for road safety, wanted to change that perception, and tell young adults that cannabis can be stronger than they think it is. In August, they released the shocking "Drive High" spot.

"We wanted to make the message memorable by showing the drug as something sneaky that can take the control of the wheel," says Luc Du Sault, executive creative director at agency lg2 in Quebec City, which created the spot. Nicolas Monette directed the piece through production house Gorditos. The campaign was seen on the web this summer and on TV in Quebec this fall.

The Puffco Peak product is a rig for streamlining the dabbing of cannabis concentrates, which can be a dangerous and impractical process to do manually. With four unique temperature settings for different effects, and different users, you drop the oil in, double click the button and wait 20 seconds. The device includes intelligent temperature calibration, so the device maintains a consistent experience no matter when you hit it.

Budder Creative designed a "shop-in-shop" retail and merchandising system for the Dosist brand and products in dispensaries.

"Starting with established brand equity, we looked to the elements of the brand that make it unique in the marketplace," the agency says. "One differentiator for Dosist is the brand's reputation for high-quality products as well as the efficacy and delivery of precise dosages. The idea of precision is visually represented in the brand by the thin line that appears on the product packaging and some supporting branded collateral elements." 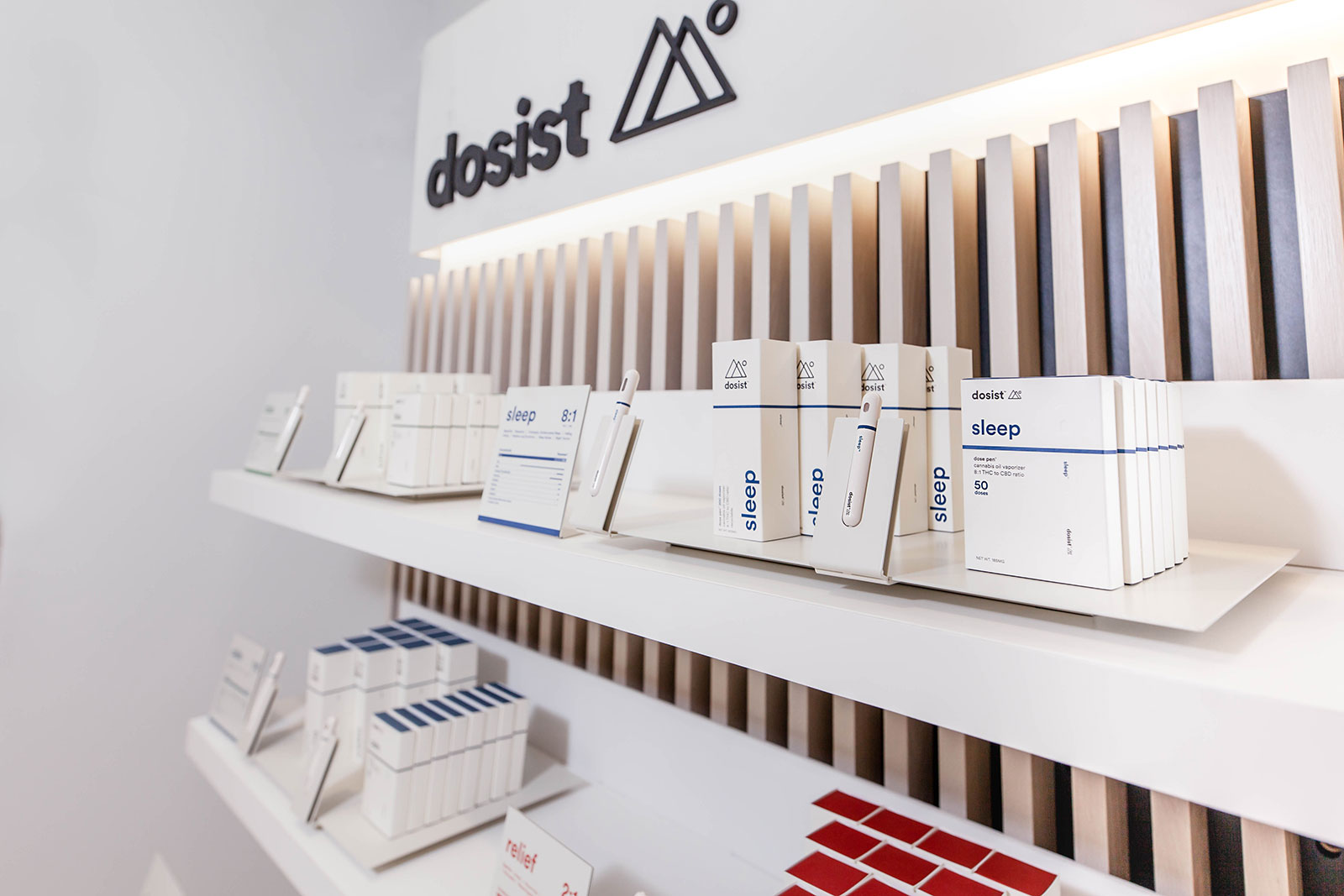 "Taking a cue from that design detail, Budder began to work on concepts that incorporate that thin line as a reveal element in the physical components. This was achieved by allowing negative space between elements to create a floating effect. The reveal and floating elements play well with the concept of precision and nods to the effect of the product itself. These elements became tentpoles for design of the SIS and merchandising KOP and is intentionally carried throughout the systems." 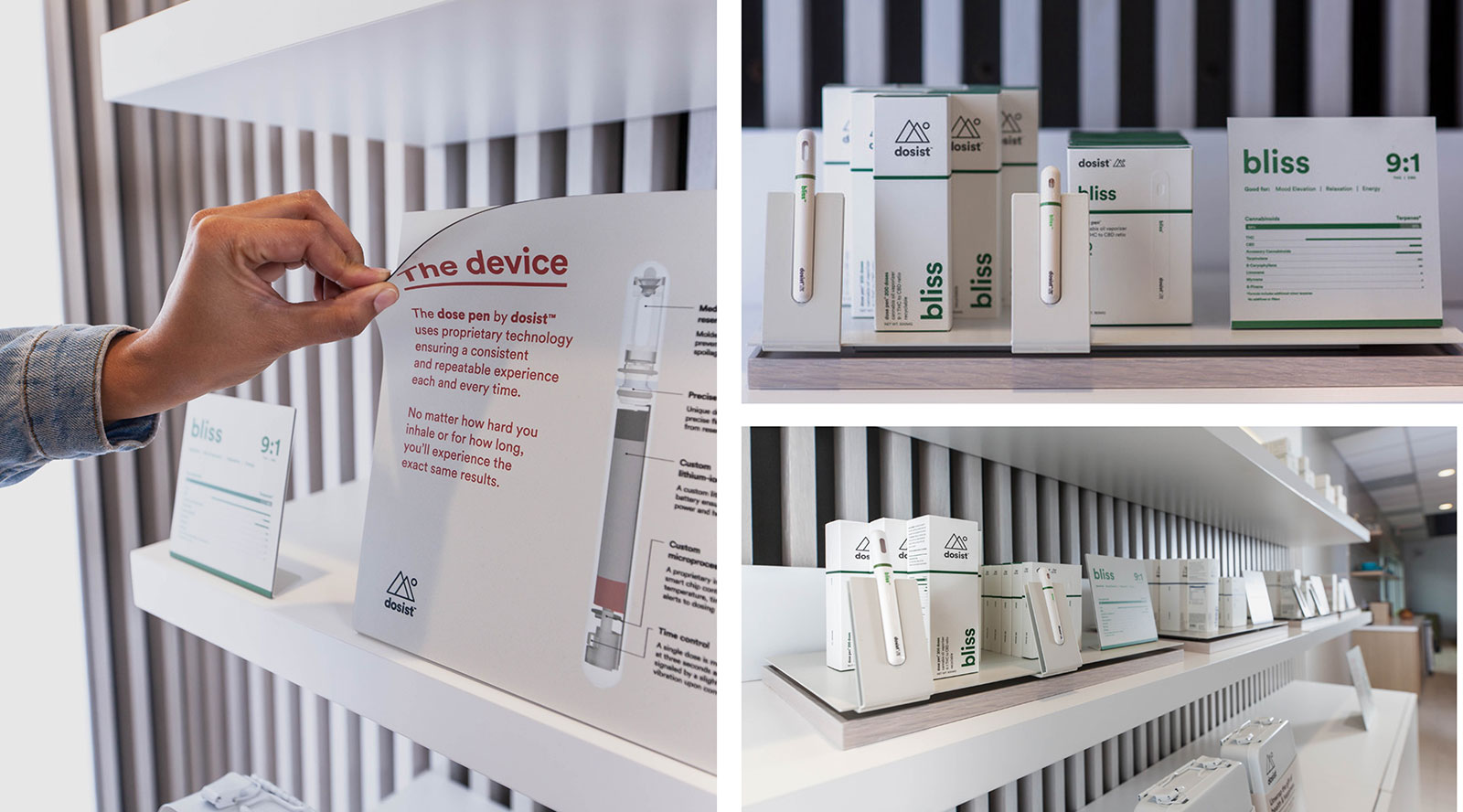 Colorado's Sweet Grass developed a remarkable new edible for cooking cannabis cuisine—Cannabutter, featuring 100-millligram sticks of ready-to-use cannabis-infused butter. Each stick is lab-tested for potency and consistency so amateur canna-chefs know exactly how much cannabis they are using in their recipes. 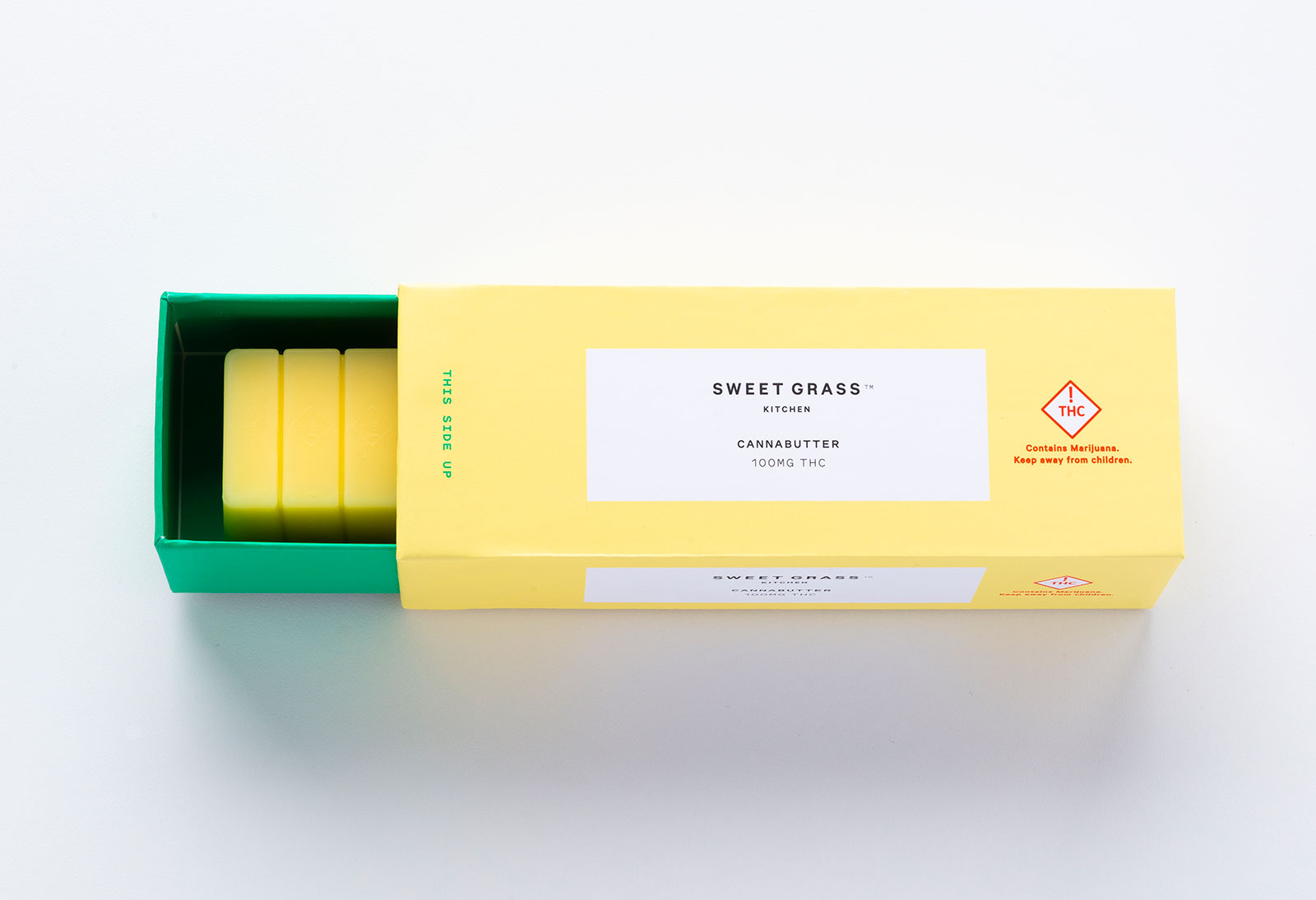 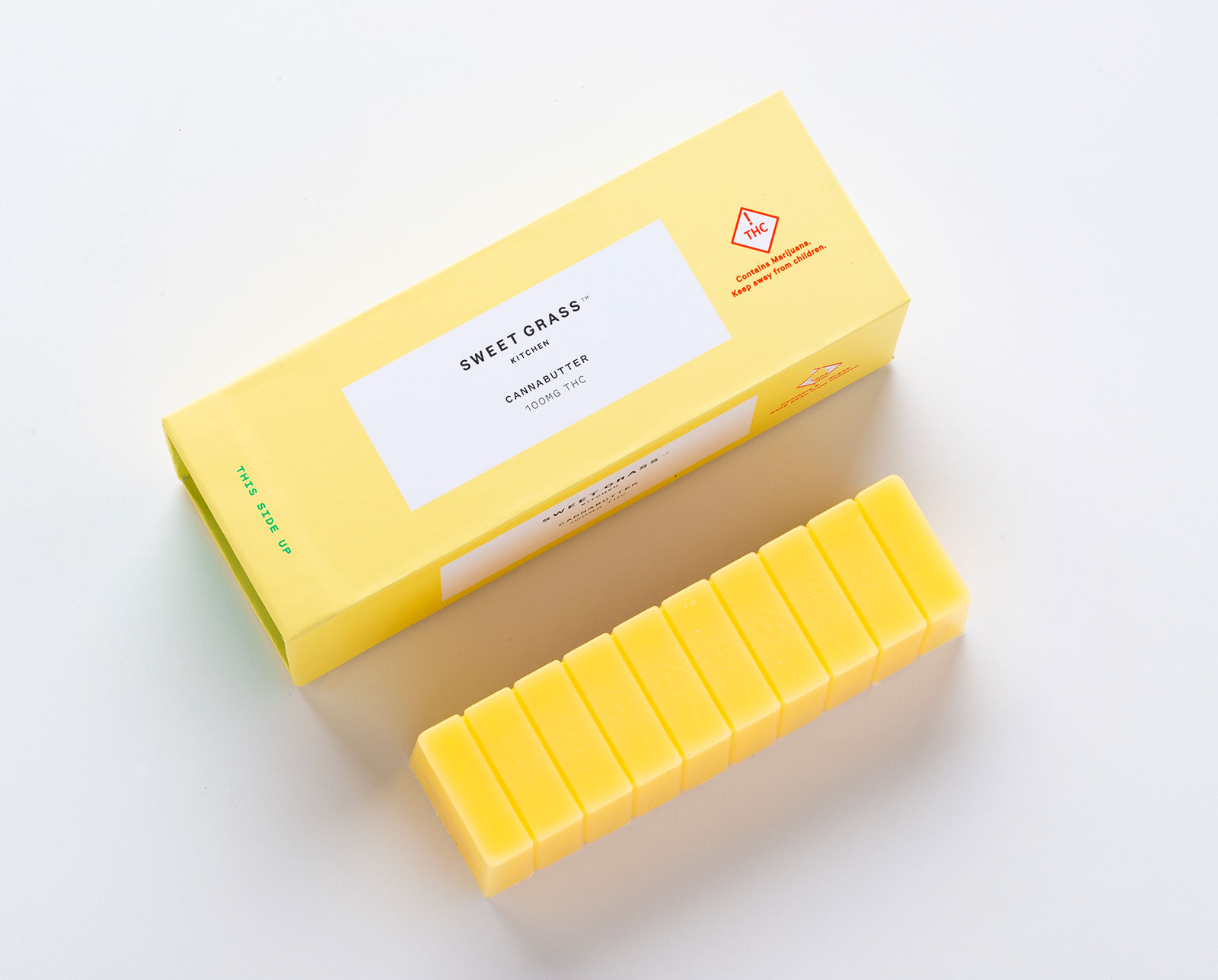 Viceland's in-house production team created 40 minutes of custom stoner-centric interstitial content for prime time during Weed Week in April 2018. "The campaign targeted 'Sensationalists,' who have a passion for newness and novelty," the cable network says. "This primarily millennial audience is over-targeted and unphased by advertising. Once we got them to Viceland on April 16, we kept them engaged during prime time throughout the week with custom stoner-centric interstitial content that aired during promo time."

Houseplant, "An Elevated Brand of Cannabis"

The Brand Studio at UTA was engaged to position, name, and develop the visual identity system for Houseplant, the cannabis company founded by Vancouver natives Seth Rogen and Evan Goldberg and dedicated to supplying the highest quality cannabis products to consumers across Canada while equipping them with the education needed to elevate their experience.

The visual identity program created embraces the brand's core values: elevation, design, and guidance. It combines a modern feel with a hint of nostalgia, and includes a graphic suite of patterned geometric lines that help guide consumers to the strain that achieves their desired mood.

UTA also created a series of educational brand videos, a social media campaign that leaned heavily on the identity's retro vibe and spirited accessibility, and an exclusive vinyl record collection that offered a soundtrack for every strain were delivered. 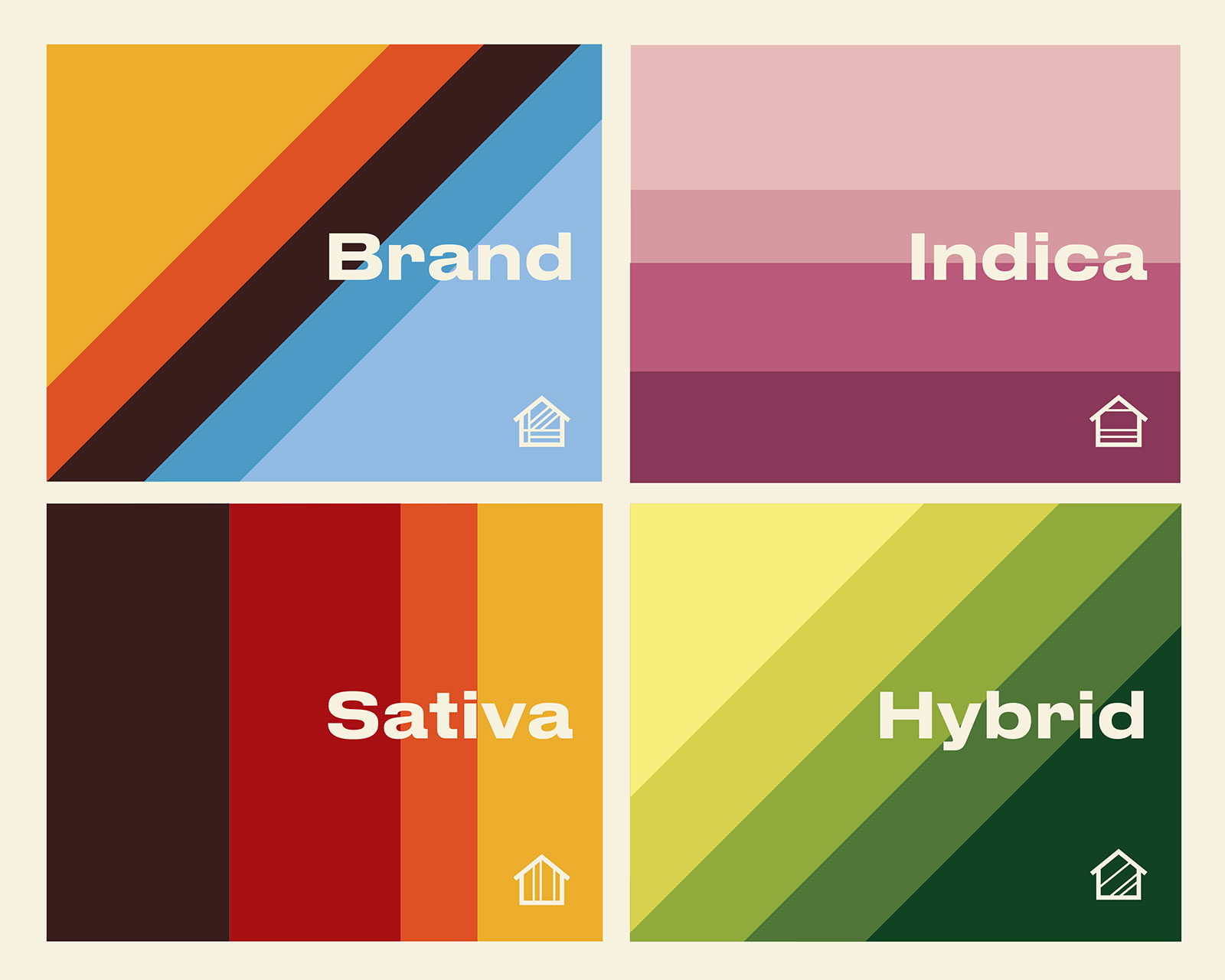