Plus, how technology is creating new ways to connect immersively with fans 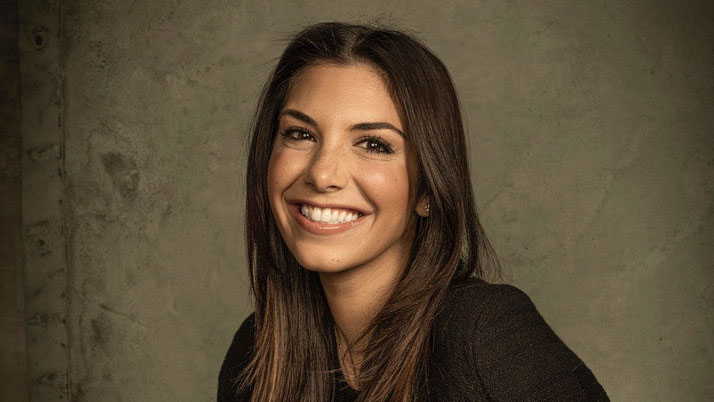 From Stranger Things and the Duffer Brothers, to all of Ryan Murphy's films and series including the smash hit Dahmer—Monster: The Jeffrey Dahmer Story and his latest hit series The Watcher, Jennie's creative leadership has been an integral part of the launch and success of these properties and many more.

Jennie started her career at Universal Pictures, where she honed her chops on creative advertising campaigns like Pitch Perfect, Fast Five and Ted. When Jennie isn't working, she enjoys spending time at home in Sherman Oaks with her husband Michael, their daughter Sadie and adopted dog Roger.

We spoke with Jennie for our Backstory series, where we chat with folks in the entertainment industry about their creative inspirations and more.

I grew up in NYC and Westport, Connecticut. East Coast girl at heart! Came out to L.A. for college in 2005 at USC and never left. :) Fun Fact: I still have my 203 area code despite feeling like an L.A. native. I now live in Sherman Oaks with my family and love it.

Straight out of college, I was lucky enough to work for Adam Fogelson when he was at Universal as his marketing associate/second assistant. At the time, Adam was the president of marketing and then chairman of the studio. I had done an internship at NBCU in my senior year of college and met him and a few others from the marketing department at an executive lunch and learn. I was fascinated with the work they did, and up until that moment really didn't have a clear picture of what film marketing was, how it worked and what it meant. Working for Adam was such a unique and special opportunity, as I got to observe and learn about all the different facets of the film marketing department at a high level—from creative and research to media and digital, brand partnerships, consumer products, publicity, and beyond. It was an invaluable education on the business, and Adam was and still is such a mentor for me.

I eventually found my way into creative advertising working under Frank Chiocchi, another incredible mentor of mine, who really helped teach me the building blocks of creative development. Crafting materials that lead with feeling, more than story, was and still is at the core of Frank's creative, and it's something I think about in every campaign I work on. That visceral, instinctual reaction from audiences is more powerful than anything else, and in many ways I believe it's the core ethos of our job—make people feel something.

Launching the trailer for Stranger Things 2 featuring Michael Jackson's "Thriller." Still can't believe we got THAT song. Such a wild journey and one that I will hold with me forever. I'll never forget the reaction to it at Comic-Con when we debuted at Hall-H. Working in streaming now for almost nine years, we don't often get to see our pieces played on a big screen or reacted to by a collective audience, and watching that happen in real time was so special and just so, so, much fun. I have to credit my incredible creative counterparts at Trailer Park, Kelly Adelman and Adam Finkelstein, who collectively produced and edited that piece with such passion. We almost had to walk away from the song, and when it finally came through and was out there in the world, our combined reactions were euphoric.

Jurassic Park. How can you not? Forever a Spielberg superfan, this movie is the epitome of the summer blockbuster to me. Fulfilling my childhood dreams of being a paleontologist and seeing dinosaurs come to life, the movie spoke to me on so many levels and I still jump at the raptor scene today. I reference the movie all the time in my work now—I loved the way the film explored the idea of suspense, and in some ways I feel like it rewrote the playbook on how to build tension physically and emotionally in film. I always talk about the feeling I get when I see the scene of the cup of water shaking and trembling in the Wrangler before the T-Rex arrives. Probably one of the scariest and most epic moments in the whole film, it always stays with me as a distinct feeling that I believe great marketing can and should deliver on: Without revealing too much of anything, how can we make audiences feel EVERYTHING? Can the idea of something be even more intense than the reality itself?

The Little Mermaid. I am a Disney animation aficionado—in particular, I live for the golden age of Disney Animation with the late Howard Ashman's incredible influence and genius. The Little Mermaid is probably my all-time favorite of the bunch, and I won't lie that I've even indoctrinated my 13-month-old daughter to love it, too. Ariel is literally the icon on my Gmail picture, that's how deep my passion goes. For me, it's the music and the magic of seeing a world under the sea come to life. As a little girl, I used to swim in pools and attempt to have my hair flow like hers—safe to say it never did, but a girl can dream!

Mrs. Doubtfire. Robin Williams is a genius. The improv and voice acting in that movie will never get old, and it's a beautiful message about the lengths parents will go to be with their children. The run-by fruiting scene is an all-time favorite, and I still wanna get up and dance when the "Dude Looks Like a Lady" montage comes on screen. The best!

"You've always had the power, my dear, you just had to learn it for yourself." —The Wizard of Oz. It's in a beautiful watercolor painting of Dorothy and Glinda in my daughter Sadie's room. :) Another all-time favorite movie. Judy Garland stan over here!

Trailer: The Social Network teaser featuring Radiohead's "Creep" sung by a children's choir. Showcasing the Facebook UI to audiences in rhythm with the music, how people interacted with it, and what it meant to them—all combined with the sheer haunting vocals of the song—just blew me away. Still to this day one of the most brilliant pieces I've ever witnessed.

Classic: Will & Grace (the original)!!!
Recent: Only Murders in the Building. I LOVE STEVE MARTIN AND MARTIN SHORT. I WANT TO HANG OUT WITH THEM ALL THE TIME.

The beauty of working at an organization like Netflix is that you get to work on so many amazing projects, so it's hard to pick just one … but I will say I'm really proud of the campaign we did for Dahmer—Monster: The Jeffrey Dahmer Story. We knew going in we needed to take a strategic approach in the marketing to properly land the complex and important message of the series. By choosing to truncate our pre-launch campaign to six days and strategically debuting our core assets back to back over two days—i.e., two distinct trailers that mirrored the dual narrative of the series—we were able to create a ton of impact for the show all while avoiding the lulls of a traditional pre-launch campaign that might have otherwise unraveled the title, and the campaign, due to the controversial material. This unique strategy allowed viewers to see the full picture of the series, which finally shined a light on the other side of this horrific case.

Disney's Wakanda Forever trailer. The music, "No Woman, No Cry." The shot language. That one line of dialogue. Beyond chills-inducing. That piece was so much more than a trailer. The execution was flawless, and they knew the significance of the moment and the conversation they were acknowledging both in the film and outside of it. It was the type of piece that brought tears to your eyes and made you want to stand up and cheer. Complete and total peer jealousy. Just incredible, incredible work.

New technology gives us so much opportunity to bring the worlds of series and movies to life for our fans in ways that we never could have imagined. When we did the projection mapping rift stunt for Stranger Things 4, it created a moment for fans that was unlike anything else—we brought Stranger Things and the Upside Down INTO their city, literally into THEIR world. Creating more IRL experiences for fans that allow them to deeply connect and engage with their favorite content is something I can't wait to do more of and watch unfold.

I'd be an Imagineer at Disneyland! Who doesn't want to make theme park rides at the happiest place on earth?!