Awesome Inc's Ashley Kohler on Jaws, Golden Girls, and FX's What We Do in the Shadows

Plus, the blurring of the lines between content and advertising 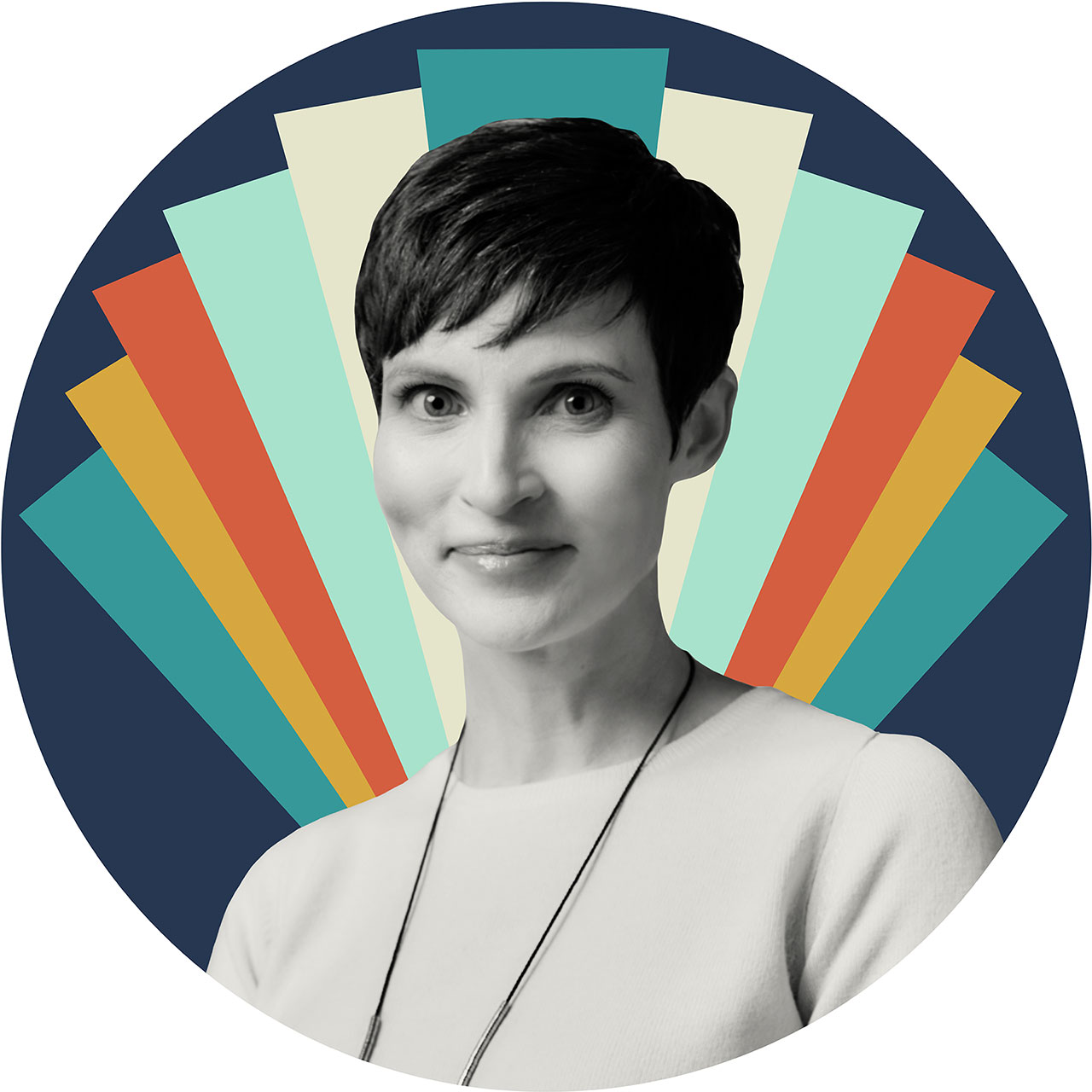 Ashley Kohler is the multi-hyphenate head of Awesome Incorporated, a motion design and animation studio. Ashley launched Awesome Inc in 2006 after eight years at Cartoon Network. Supervising both creative and production, Ashley's hands-on approach can be seen throughout Awesome Inc's distinctive body of work and visionary team of talent. Ashley's creativity, attention to detail and ardor for animation help distinguish Awesome Inc in the crowded field of content creation.

Ashley has led teams on over 150 episodes of series animation for networks like Adult Swim, Hulu and IFC, while also supervising commercial, promo and packaging projects for clients including FX, Cartoon Network, Wieden + Kennedy and Nickelodeon. She is passionate about improving diversity in animation and empowering artists throughout the Southeast, and serves on the board of directors for ASIFA South.

We spoke with Ashley for our Backstory series, where we chat with folks in the entertainment industry about their creative inspirations and more.

I was born in Atlanta, and outside of college and a short time in New York, I've lived here all my life. I loved my time in NYC, but Atlanta has really come into its own in recent years largely due to the 2008 film tax credit. The arts community has changed drastically, and the influx of artists and filmmakers has caused so many other things we once did without to improve as well, like our dining, entertainment and job opportunities. I'll always be a catfish and grits girl at heart, but it is good to know that I can now get a super fancy version if I want it!

Executive assistant at the now-defunct Turner Home Entertainment. I studied advertising in school, and was placed at Turner by an advertising temp agency while I was finishing my last class. While I was excited to land a job, I didn't yet see my future in entertainment though it was right in front of me. I was focused on traditional advertising and really didn't understand how closely they were related. I had no idea I would end up back at Turner working in on-air promos for Cartoon Network just a few years later.

Becoming a 100 percent woman-owned business. Leading a company was never something I'd envisioned for myself, it was just something that seemed to organically happen. I come from a line of strong women and believe deeply in carrying on that tradition and setting an example for others—creating a healthy and positive environment where people can create work they are proud of.

Jaws by Stephen Spielberg. I've just always loved it, it is my favorite movie of all time.

Willy Wonka and the Chocolate Factory by Mel Stuart. Rarely a week goes by that I don't reference something from this film in some way … somehow, growing up with the notion that there could be a physical manifestation of your dreams had a lot to do with who I grew up to be. For instance there is a line in "Pure Imagination" that's always stuck with me: "Anything you want to, do it. Want to change the world, there's nothing to it." Far into my adult life, my mom would ship me boxes full of surprises wrapped in heavy gold paper as a reference to Wonka's golden tickets, just to bring a simple moment of joy and wonder.

The Iron Giant by Brad Bird. This movie has always been special to me for a few reasons. Though I loved the big Disney features growing up and worked at the Disney store as a teenager, I never really connected with any of the princess movies. When I saw Iron Giant, it just felt different to me—the animation was beautiful, it was sci-fi and retro at the same time, and managed to make me cry at the end without a love story (and still does). I remember seeing that movie and thinking that I wanted to produce animation, long before I ever had the opportunity to do so.

"You're going to need a bigger boat." —Jaws

Jaws. OK, I know this is a lot of Jaws, but it is my favorite poster, too. You have to respect the iconic nature of this poster—it is instantly recognizable and you understand the premise of the film with a single glance. 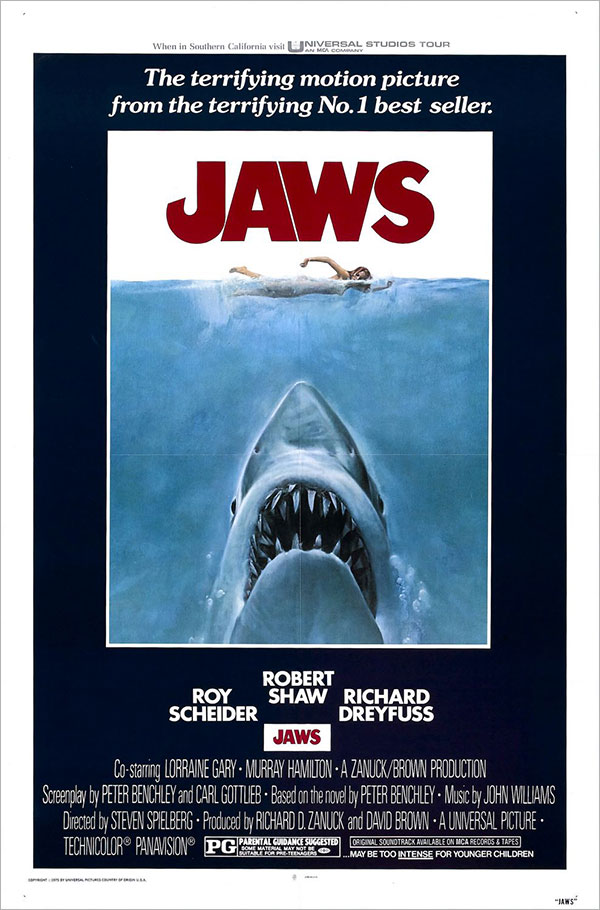 Once, early in my career, I was shooting a spot for Cartoon Network on the Universal backlot, using the same clock tower from Back to the Future. On a break, our Universal liaison, knowing my love for the film, took me up to the Jaws area in a golf cart. In a crazy twist of fate, the ride had been drained for repairs that week and she let me climb down onto the track, stick my head in Bruce's mouth and snap a photo. It is a wonder I wasn't electrocuted. Best day ever!

I've been watching The Golden Girls lately when I need something easy to digest, which I promise isn't as lame as it sounds. I'm really inspired by female creators and love strong female leads, and The Golden Girls was early to both trends. Plus, the writing and acting are brilliant—it holds up even after all these years, believe it or not! More recently I've been watching Hacks on HBO Max. It, like Golden Girls before it, mixes well-developed female characters with great writing, I'm only frustrated that I can't binge it!

One of our favorite projects recently was the Season 2 promo campaign for What We Do in the Shadows on FX. It is always amazing to work on promotion for a series you are already a fan of—it certainly makes it easier when you feel excited about the product as an actual viewer yourself. For this project we were challenged by the fact that there wasn't a great deal of footage available yet, so we decided to work with press images and pull VO from clips, then create our own process to bring the photos to life. The bonus is that the team at FX is truly wonderful. They are talented, collaborative, and always motivate you to do your best work.

I feel like the work BBH, Google, the U.S. Black Chambers and their production partners did in support of Black Owned Friday was truly a home run. I am a fan of the music, the design and animation, and of course the mission.

I love seeing the lines between content and advertising and marketing continue to blur and combine in new ways.

I would probably be a travel agent or a farmer? I assume it is the producer in me, but I love planning the perfect trip down to the minutia, and being outside growing things in the dirt just brings me peace. Up until I started Awesome Inc I kept "tractor operator" on my professional résumé ... just in case.