Every tat's got an origin story, right?

Then it chose four winners, each of whom walked away with a unique design.

"Since the beginning of 2019, New Belgium and Voodoo Ranger has released a seasonal rotator IPA that is on shelves nationwide for roughly four months at a time," explains creative director Rob Lewis of Fact & Fiction, in a conversation with Muse. "Each beer has its own unique theme, style and Voodoo Ranger character. Juicifer was the featured IPA from May to September, and the character was the traditional Voodoo Ranger skeleton, toting a leather jacket, motorcycle and devilish persona."

The skull, the biker vibe, the dark rebellion? It's ideal tattoo food.

To promote the giveaway, Fact & Fiction created a video series called "Skin & Bones," which ran on Instagram. In the first episode, "Symbols," artist Patrick "Fish" King describes the role tattoos play in our culture, from pagan rituals to sailor tats.

"Tattoos are supposed to be very outward symbols of an inward thought. There's always symbolism; it's all this human culture," says Fish. "It's a way to confront our own mortality, our own transient life."

His design was inspired by an Alphonse Mucha print (specifically, "Emerald" from 1900), and appears in full below. 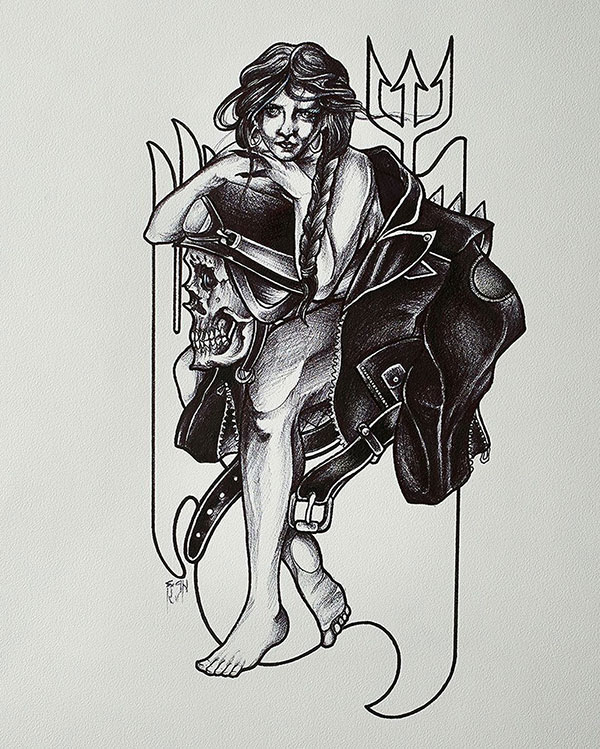 "Little Black Church is a Denver-based tattoo shop that focuses on the craft of tattooing while making sure the experience matches the result," Lewis says. "They enjoy collaborating with and supporting other local businesses, and excel in crafted, clever and sometimes dark-themed tattoos."

Lewis pitched the idea of a partnership while getting his own tattoo. "I had a relationship with Fish because he's done all of my tattoos," he admits.

The occult vibes helped seal the deal. "Their name, paired with their personal styles—and working with another Colorado-based brand like New Belgium Voodoo Ranger—made the collaboration a match made in … heaven?" Lewis laughs.

In "Monsters," the second episode in the promotional series, artist Jef Kopp talks about his affinity for the grotesque.

"I'd rather draw the devil than a pinup girl, any day," he says. Here's his Juicifer baby: 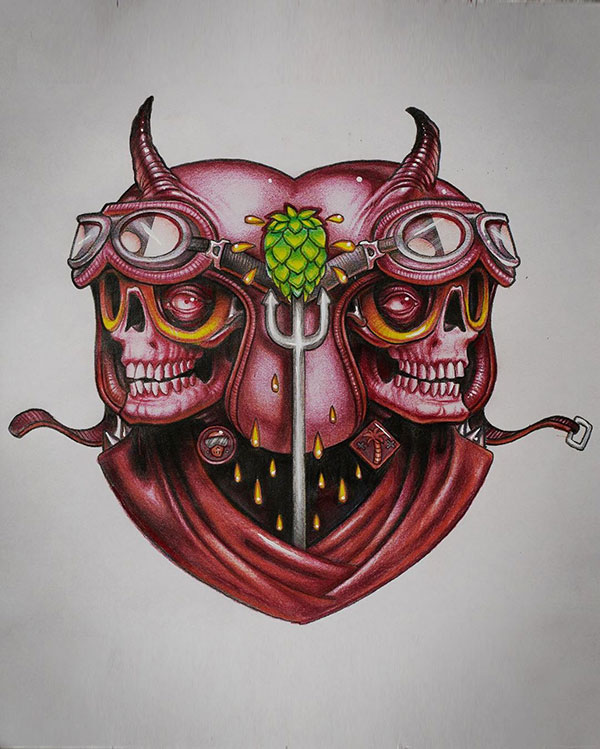 The promotion ran from Aug. 2-12, exclusively on Instagram, with paid media just for the Denver metro area. The videos, complete with the stories of the custom pieces, were released progressively. Some 614 people registered for the permanent promo art.

On Aug. 26, the four lucky winners were shipped to New Belgium's satellite brewery, inside the Source Hotel in Denver, to get inked. Each took about four hours.

"One already had a Voodoo Ranger-inspired tattoo and flew in from Chicago; another was inspired by the content itself and was a Denver local," Lewis says. "One didn't have any tattoos at all, making this tattoo his first." (He got the frog tat seen further down in this article.) "The last winner flew in from Baltimore … against his wife's wishes."

That must've been a fun conversation. Now's the perfect time to share Episode 3, "Connection."

Artist Adam van Deutekom explains the intimacy of creating a work for someone who will carry it for the rest of their lives. "It's more than just the tattoo; it's finding yourself," he says. 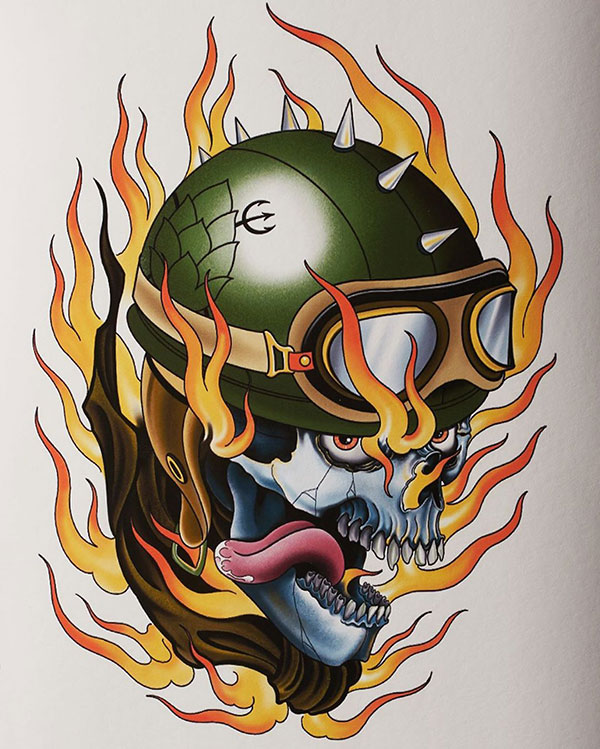 Next up, "Machines" features artist Logan Leblanc, who describes his fascination with ... machines.

"One of the things that connected me to the Juicifer design is motorcycles," he says. He also added a frog to his design because they symbolize good luck. 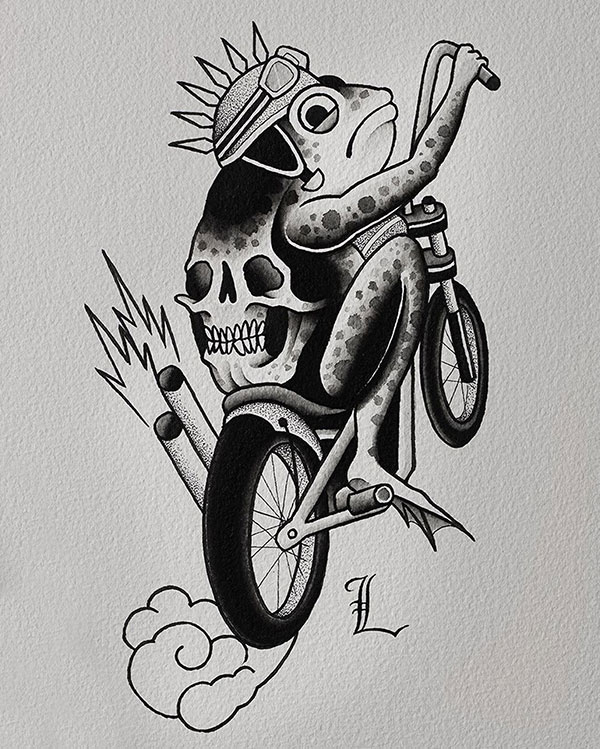 The name "Juicifer" comes from "the beer itself being a juicy IPA," Lewis tells us. Voodoo Ranger likes to emphasize a beer's personality in a lighthearted way, "which is nice because the craft category tends to take itself really seriously," he notes.

"With the Juicifer character, we really leaned into the dark-ish theme of the name, yet did it all with a little bit of a wink. Our history of bringing levity to everything we talk about allowed us to create this kind of persona without people thinking we were actually into the occult, or devil worshipers or something."

"Permanence," the last video, unites all four artists and rounds the campaign up. You also get to meet the winners.

"With biker culture, skulls and devils as our inspiration, paired with the brand's support of the arts and our enthusiastic following, the idea of creating custom tattoos came pretty easily," Lewis says. "We had a pretty good idea that people would be interested; we just didn't know how many people would be willing to brand themselves forever."

That willingness extends to people at Fact & Fiction. Rachel Block, a copywriter on the work, returned to Little Black Church a week after the campaign to get her own tattoo—not of a skull … but of a carrot. (Sadly, we don't have pictures of it.)

And to compensate for a lack of b-roll of people getting tattoos done, executive producer Christian Silberbauer also went under the needle, using footage of that moment to fill out the video featuring van Deutekom. Talk about commitment to the craft!

See a few more closer shots of the work below.