Plus, the remarkable artist who inspired him lately

In January, we covered photographer Jimmy Nelson's "Blink. And They're Gone," a social art project created with J. Walter Thompson's Amsterdam and India offices to illuminate the world's remaining indigenous tribes. At Cannes Lions, we were lucky enough to sit and talk to him properly. It's the longest interview we held, which is why it took a little while to publish.

But we hope you find it worth the read. Few people have found a way to live their creativity—lucidly, breathlessly and with respect for what it costs—the way Nelson does, and the way he sees things changes the way we see. (That's probably why he's a photographer.) 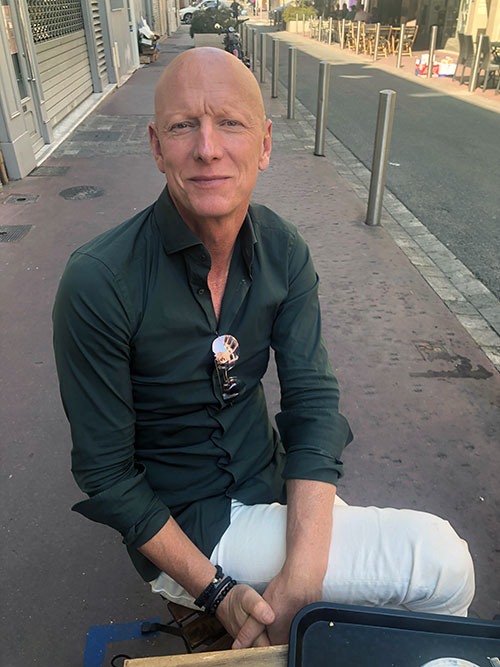 Below, we asked Jimmy about his work, what inspires him lately, and the artist who recently blew him away with her self-portraits.

Muse: What's your favorite thing that you made recently?

Three weekends ago, in my studio, a large workspace of about 600 square meters, where I work with my team, I redecorated the main wall. I'm obviously a very visual person. I spent six months gathering images that have mattered to me from the last 40 years. Then I framed them all and made a montage.

What was special about it?

I'm extremely spatially aware. If you give me numbers, I'm blinded and have a panic attack! But shapes, three-dimensional forms? My mind comes alive.

There were more than 60 frames of varying sizes, shapes and colors: Two frames are 1x2 meters; some are 10x15 centimeters. I had them all on the floor, and now they're on the wall, all spatially aligned.

Everything fit like a puzzle, but there was no plan. I instinctively trusted that those 60 frames on the floor would sit on the wall together. That representation of the past is very aesthetic, playing with colors and shapes, and it fits like a hand in a glove … from no plan.

It's utterly insignificant, but I find it thrilling. I often joke that if I didn't persist in the profession I have now, I'd have been a very good taxi driver, because whatever baggage you present me, I will always get it into the car.

And what about work-wise? What's giving you life lately?

Ansel Adams, seen as a doyenne of landscape photography, set up f/64 camera apertures: This idea that every picture has to be made with the smallest aperture possible for the maximum depth of feel, and on a 10x8, which requires an enormous amount of stillness. It's zen behind the camera.

You can feel the stillness in his images.

Right. So I'm going to emulate him. But Ansel Adams said it was impossible to photograph people in that context, the landscape context, because the shutter speeds were too long.

Richard Avedon used a 10x8. He wanted to photograph people, but said it's impossible to photograph them in context, in landscapes. Instead, he photographed them in front of a white cloth, or in a studio.

I'm gonna do all three together.

Yes. It's never been done—and I'm doing it in the most remote and difficult circumstances, with these tribes and communities I work with. That, for me, is the antithesis of making something with a lining, structure, control.

I was at a school in the States recently—Brooklyn Tech, all these kids on their smartphones. They kept asking, "Why use analog cameras when you can use digital? Just spray and pray. Why make life so complicated?"

Right! I told them it has to be complicated, and they said, explain. So I came up with an analogy that is very childish, but I think it resonated, because they're all teenagers: You're busy looking for a partner. We all are in life, but you're at an age of ripening. So tomorrow, you get two options when you walk into the school square at lunchtime: You can kiss anybody you want. Whoever you want, they're standing there waiting for a kiss. There's no questions, no Tinder, just … everybody says you can kiss them.

Option two is, you can only kiss one person, but not tomorrow. It's at the very end of the week, but only for one second, in the last minute, the last hour, the last day of that week. Which one would you choose?

All that invested emotion: The hunt. So then the kiss, the kiss is explosive.

But the kiss is nothing. It's about the physicality and emotion you invested prior to that kiss. So yes, you could kiss anybody you want, but you don't feel anything because there's no emotional connection, no reason. It's superficiality. But if you're made to choose, and you can only kiss for one second, you're gonna make damn sure it's the right person, the right moment.

Back to overcomplicating the creative process. When I press the shutter of that big old camera, that one sheet, and it's taken a month to get to that location, two weeks to persuade the people to stand as I want them, the climax is out of this world, because this is such an investment. It's alignment of communication, focusing of light, composure, balance, peace, stillness. 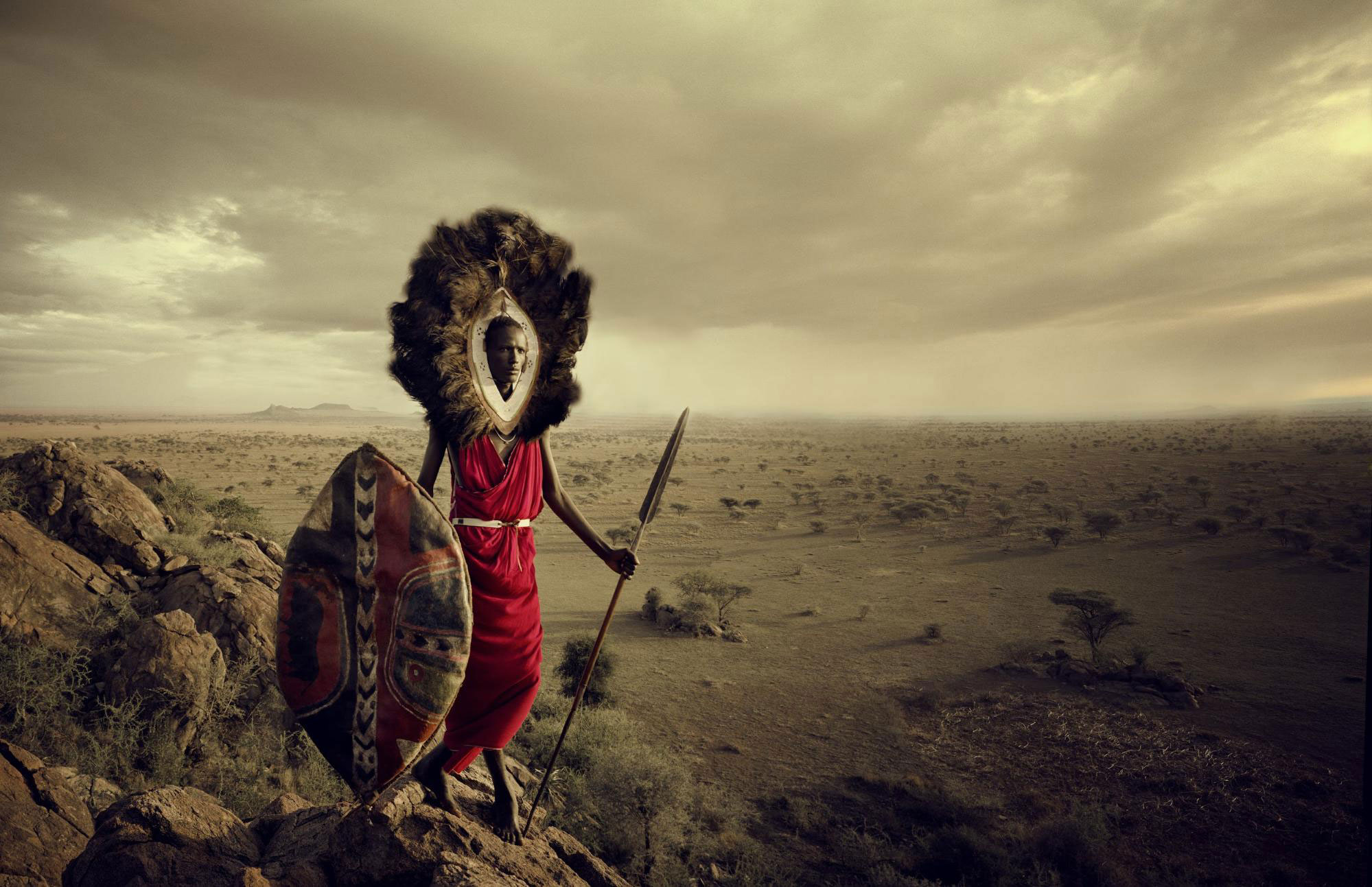 A Maasai warrior in Tanzania, from Jimmy Nelson's "Blink. And They're Gone"

It's the biggest high I can ever feel. That high is in the order, how I see the world. If it's detailed, sharp, clear and aligned, then perhaps it resonates with the audience that sees it.

Just to see if I understand: I could use a digital camera to take a bunch of pictures, and maybe one is beautiful, but…

Right, you could "spray and pray." But you don't look at the subject. You don't compose it, you don't even really see it. Imagine if I want to photograph you, but can't communicate with you: We don't have the same language, you're afraid of me, don't want me to persuade you and your friends to come with me to the top of a mountain and stand there for five days. We've got to make contact.

It's extremely intense for you to trust me in that process. You have to give me everything, and I'm gonna give you everything. Beyond that, there's no financial transaction, not even a picture you can look at; there's just film, and I take it home [to develop it].

To that level, it's extremely thrilling and complicated.

This sounds a lot like ritual—raising energy collectively, to produce a cone of power. How do you think that impacts the final image?

It's my process and my engagement, my alignment, and it's subjective. But it's meant to be that alignment, and that ritual is meant to be an extraordinary catalyst of observation. To first understand why so much effort is invested in people, in places we wouldn't normally give dignity or time to. If it does aesthetically resonate, how does it affect you in the changes and choices you make, and how you see these people? How then do you see yourself?

Going back to your first question, the most recent thing I did that satisfied me goes back to this: This alignment, place and order and form. I trust myself. I can almost close my eyes and put those frames and shapes on the wall … I can see the space, see the pile without any form or structure.

And it's thrilling. In that wall is 40 years of storytelling. There's a flow and an aesthetic, with many layers. What I'm trying to make is an inspiring workspace for my colleagues, because i'm about to go traveling again. That wall is a metaphor for how I am, the order I am, how I feel, and how I want that to resonate in the work they do for me.

What gets to be on the wall?

Pictures made by other people that matter to me, pictures that influenced and inspire me, and pictures I made that aren't necessarily the most aesthetic, but are important bridges in time.

Whose work have you seen recently that you really envy?

Ooh. I don't know whether I envy it, but I was at the Biennale the other day in Venice. It was a photographer, Mari Katayama, and I almost wept when I saw her self-portraits. It's very radical.

She was uncomfortable with certain parts of her body, her limbs. So she amputated them. [Katayama suffers from tibial hemimelia, which led to her to decide to amputate her lower legs at age 9.] 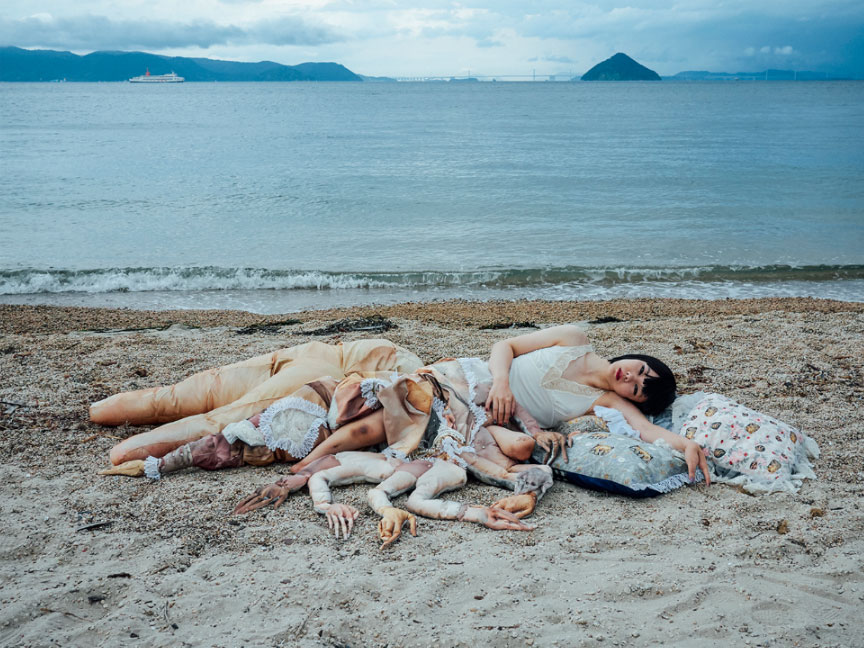 She created 3-D forms to replace these limbs in bracing ways, done through machinery, embroidery and 3-D printing, and she makes a story of them. The pictures are very aesthetic, beautiful to look at.

And the project has gone on for many years. Each phase she goes through, she creates a new limb. So it's not only the aesthetic but the creativity, this way she's … made herself into art, something utterly unique. And she's physically capable of doing everything with these artificial limbs. It's magnificent. Weird. Wonderful. Terrifying. Depressing. Enlightening.

Am I jealous? I'm not sure. It didn't inspire me to cut off my limbs, but it made me feel I need to be braver.

What do you think our bodies are for?

They're a vessel for our soul. I'm not religious, but I believe the soul lasts a long time. In this passage of time, the body is a vessel to carry it; that's all. It has to be respected and cherished. It has to be loved, but it can have no ego; it can't be vain.

It's a vessel. I feel that very strongly. And maybe this woman also resonates with me because of the disconnection I experienced with my own body after childhood.

Do you think you amputated parts of yourself spiritually, then remade yourself?

Parts of me were amputated emotionally, and I had to reconnect them. You cannot go through life without being connected to every single part of your body, mentally, emotionally. It's extremely unhealthy. You can't survive.

By being disconnected in the most radical form there is, I've had to find a way to reconnect to myself, and become extremely normal in the process. You don't get a more normal guy than me … but I had to go to a deep, dark place to reconnect myself. Most human beings aren't disconnected like that, so they have no idea what that is, what they feel, no idea why they have certain emotions.

I know that is a very spontaneous answer. I'm not sure it's profound.

From what I've gathered, people either accept or don't accept your work. Either way, there's an intense reaction, and I wonder if it's because of what it costs you to make. Maybe people can feel that, then feel an obligation to grapple with it themselves.

I don't know how you feel, but I think I'm … one of the most blessed people you'll ever meet, because I can indulge in what makes me blissfully happy. Blissful! It's true happiness. And to use a casual term, it's utterly fulfilling. When I go into this process, I'm totally fulfilled. So the more effort it takes, the happier I become.