Advertising attracts people with a creative longing to express, though it's debatable how much of that you see in the work that comes out of the factory. Maybe it's best to find outlets outside the work; often what you find is that the skill sets of advertising make personal projects stronger.

This is very much the case for "Chemical Stories" by Simone Nobili, a creative director, writer and director. The project is composed of 50 portraits of people who were plagued by addiction, their faces overlaid with the chemical structure of one of their poisons of choice. Each is accompanied by a poem.

The best way to understand it is by watching the hero video, titled "R.J. Phoenix C16H13ClN2O."

This is a tribute to River Phoenix, Joaquin Phoenix's older brother and himself a talented actor who died in 1993 of an overdose of cocaine and Valium (diazepam, known to chemists as C16H13ClN2O).

Joaquin gave River a shout-out in his Oscars acceptance speech on Sunday. Joaquin, who was with River as he expired on the street, called 911 … a call that, creepily enough, was later posted on YouTube.

Brazilian artist Yomar Augusto is seen painting the words written by Nobili, who narrates his feelings about that video: "There's nothing to see, really … It's the frantic voice of a desperate young man who's watching his brother die."

It's a weird impulse, putting something like that online. The remarkable thing about Nobili's prose is how he so neatly distills that, assigning meaning to its consumption. We're reminded of the person attached to that moment: River, an expansive talent who, regardless of what he would or wouldn't have given the world, was in any case publicly reduced to this snackable object.

"People come to play that video, write a comment and move on. Many of them decide to give it a thumbs up or thumbs down, so your death is ranked: 432 people like it, 896 people don't," Nobili continues. "Your death is like a slice of pizza, a pair of shoes. A fucking thing. So now, you tell me: Do you still want to be famous?"

In conversation with Muse, Nobili talked about what he shares with the people of "Chemical Stories."

"I struggled with anorexia when I was 15 and developed an addictive personality. In fact, I have a tattoo on my left arm that reads, in Latin, 'Quod me nutruit me destruit,' or 'What feeds me also destroys me,' " he says.

He's also mindful of the symbolism of the chemicals that accompany us in life, for good or ill. "When I write, I go by the pen name of Nembutal, which is the brand name of a medication that is prescribed to those who suffer from depression," he says. "The reason why I use this name is because my writing has been truly therapeutic, helping me over the years." 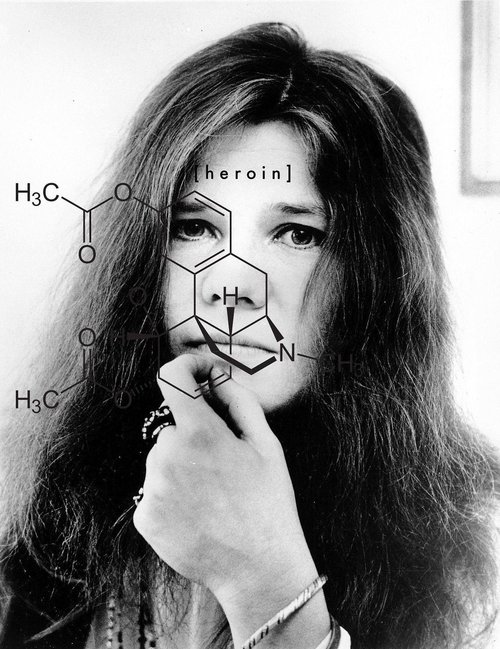 "There's no day that goes by that we don't read about amazing people who died because of their addiction. We do live in a very addictive world that pushes us to behave in an addictive manner," Nobili continues.

"Look at the way we use Instagram or Facebook, for instance. Addiction plays a greater role in our lives and pushes our 'chemical' structures. In the end, aren't we just atoms swirling around this universe?"

Check out a selection of "Chemical Stories," or see the full project. In perusing them, we were struck by how often we felt ourselves reflected back, sometimes in tiny fragments of a line—"We take What It Looks Like, we glue it to What We Think It Is and we come up with Our Own Truth," he writes of Marilyn Monroe; or, reflecting on Robin Williams' talent for improvising (something we do, often muddlingly, in life), "This must be the reason why everybody thought he was an alien."

Doubtless, someone's story will speak to you, too. Below is the poem for Joplin.

A pack of frat boys voted her "Ugliest Man On Campus."
They laughed her out of class, out of town, out of the state.
Kids called her "pig", "freak" and "creep."
Her confidence was abused.
Her self-esteem was mauled.
Despite all that, she read, she drew, she painted.
She walked barefoot whenever she felt like.
She dared to be different.
The day she cracked a bottle over Jim Morrison's head,
it was everybody's opinion
that "Janis is tough and doesn't give a fuck."
But the "Queen Of Psychedelic Soul"
was just a little girl from Port Arthur.
Boys ripped her heart and tossed the pieces
into a field of nothingness.
That's when you find yourself at war
with everything.
Your body is dragging you
in front of a mirror
to shame you and ridicule you,
while hundreds of bullies' mouths
walk in and sit around to wait for you to crack.
Instead, you blossom.
Fuck them.