Merriam-Webster and The Many Artfully Salute Drag's Colorful Vernacular

Drag culture has made many colorful contributions to today's pop vernacular. And now, Merriam-Webster is saluting that proud history by running an artful campaign in social media called "Thank a Queen" that originated as an in-house project at Los Angeles agency The Many.

The Many's associate director of design, Jorge Andrade, designed six posters for the internal "Voices of The Many" thought leadership program. The posters celebrated words—from "tea" to "shade" to "realness"—that drag culture has helped bring into the mainstream. Merriam-Webster, long familiar with how creative expression enriches the English language, partnered with the agency to run the posters in social media last week under the hashtag #DragDictionary.

From ‘tea’ to ‘shade’ to ‘realness,’ a lot of the words we see and use every day have deep roots in drag and in particular the black drag community. Each day this week we’ll be celebrating these words and phrases with our #DragDictionary spotlight, so check back as we #ThankAQueen and give credit where credit is due. #HappyBdayRuPaul (Artwork courtesy of the brilliant @totes.jorge) 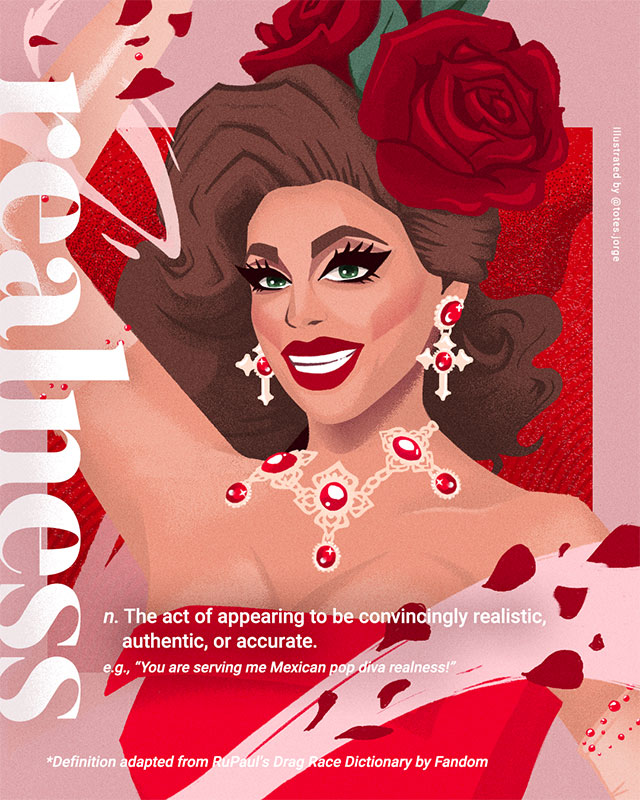 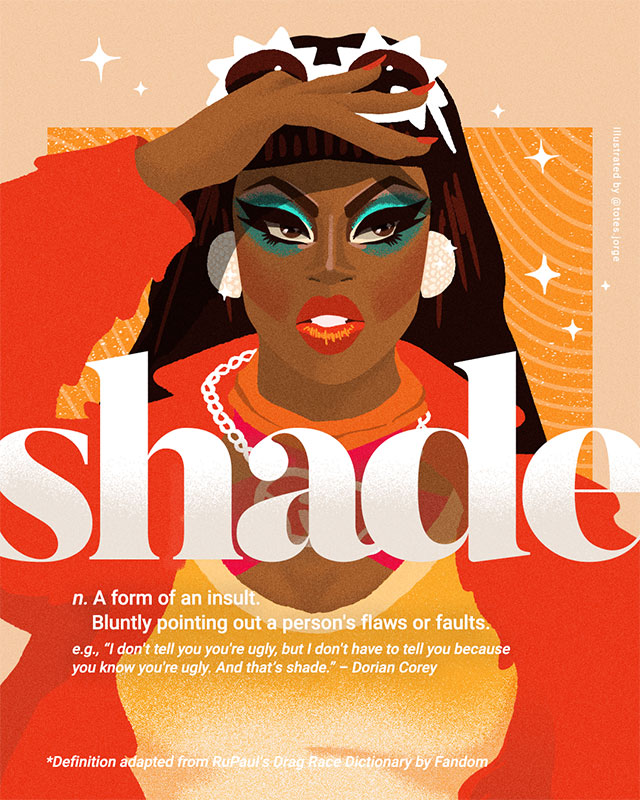 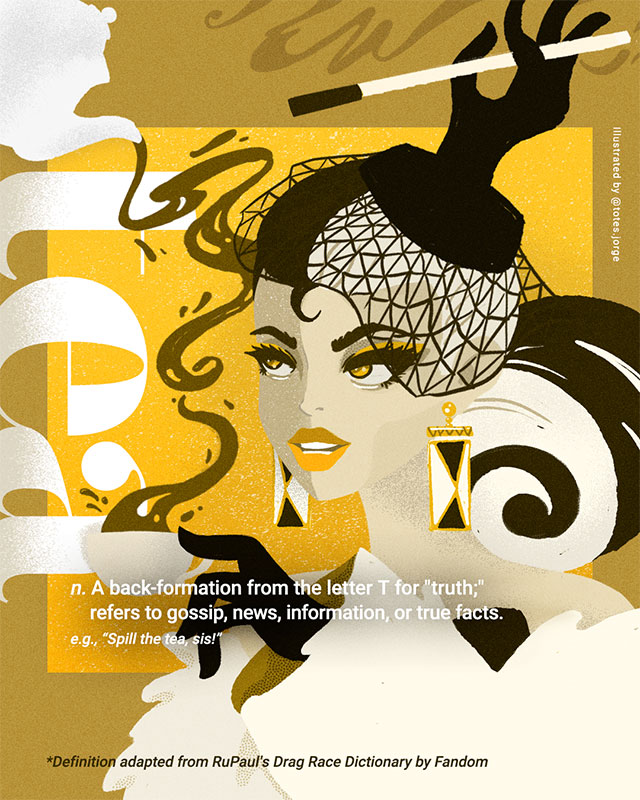 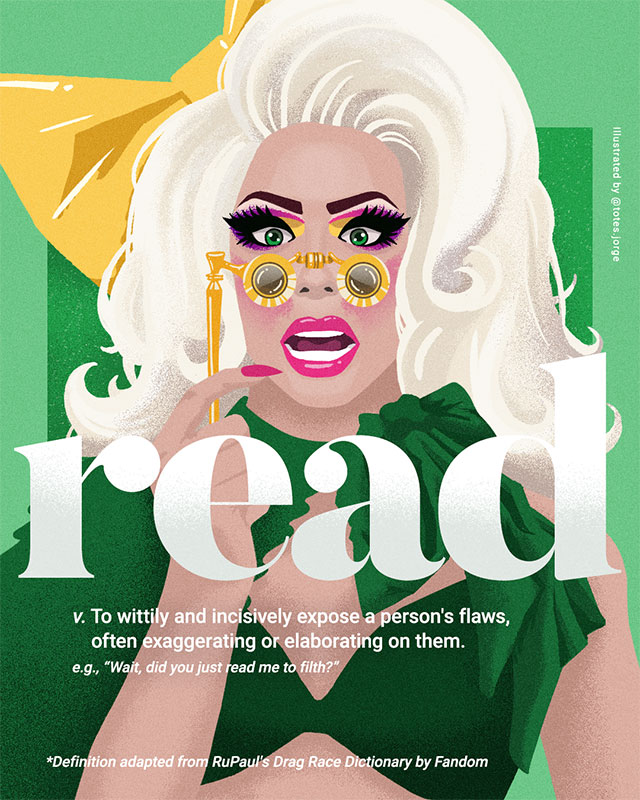 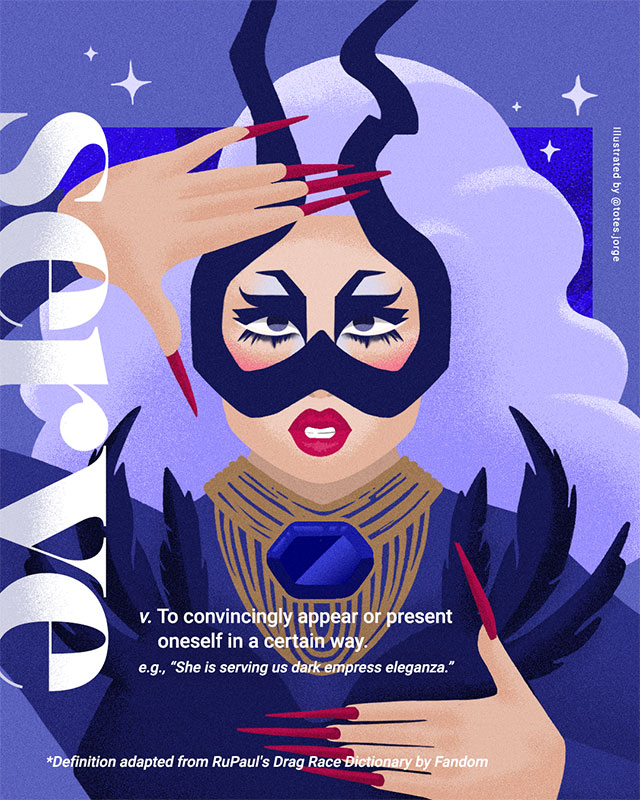 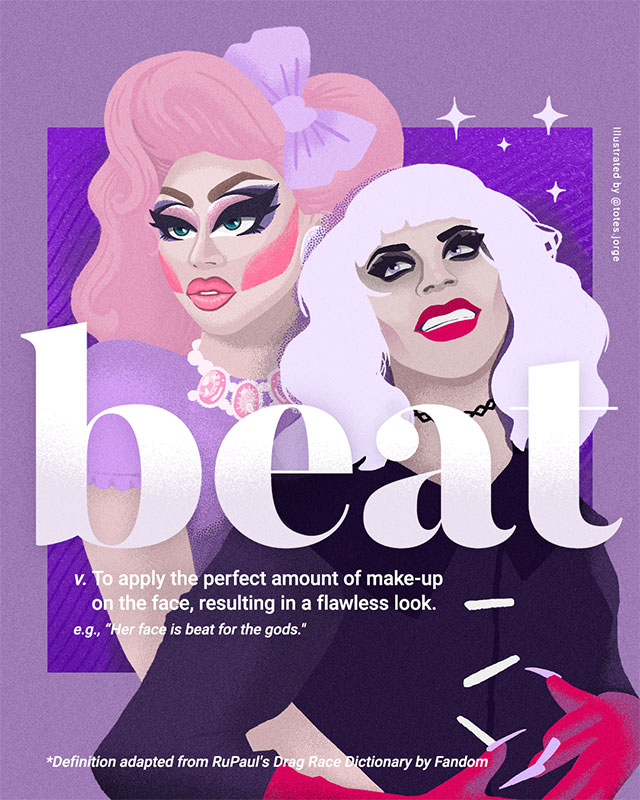 Many of the words also have roots in Black Femme and Latinx cultures, but Andrade gives drag a lot of the credit for bringing them into the mainstream.

"My vision for these posters was to give the oft-unsung drag community, Latinx, and black-femme subcultures the recognition they deserve for coining so many of the terms we hear and say so frequently today," Andrade says. "Once taboo, drag's influence is seen all over social media and mainstream culture. I'm super grateful to Merriam-Webster for partnering with us, and I'm so happy to kick this off during RuPaul's birthday week, one of the most influential people in bringing drag to the mainstream public—happy birthday, Ru!"

"The exuberance and creativity at the heart of drag is reflected in its rich vocabulary," says Emily Brewster, senior editor at Merriam-Webster, "and that rich vocabulary has a power and draw that makes it compelling to people generally. We're happy to partner with The Many on a project that shines a light on the way language expands to meet the varying needs of its many speakers."

See below for how the artwork appeared in Merriam-Webster's Instagram Stories: 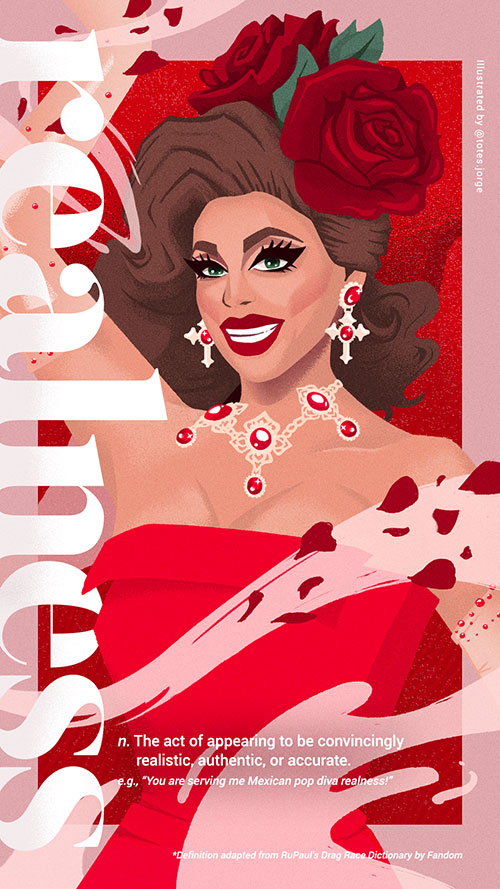 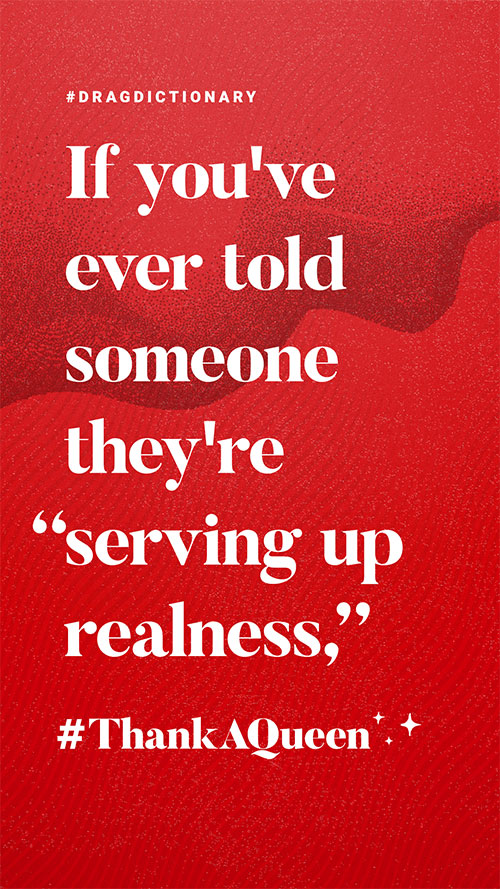 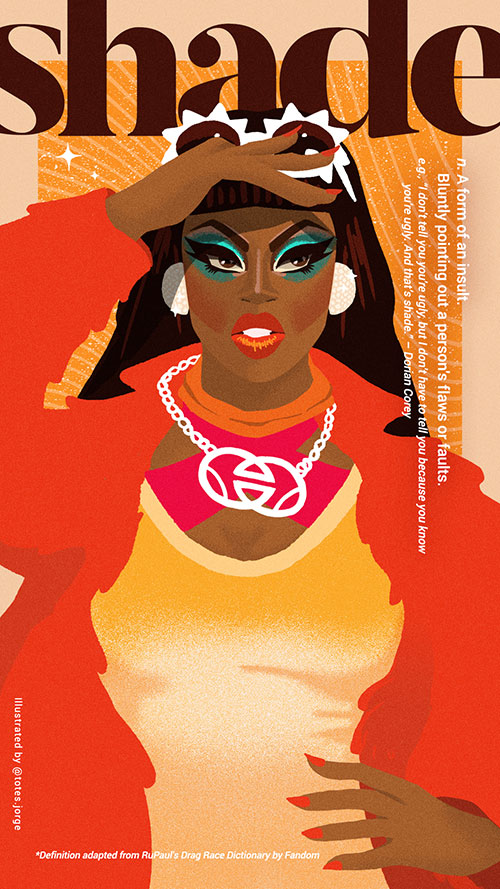 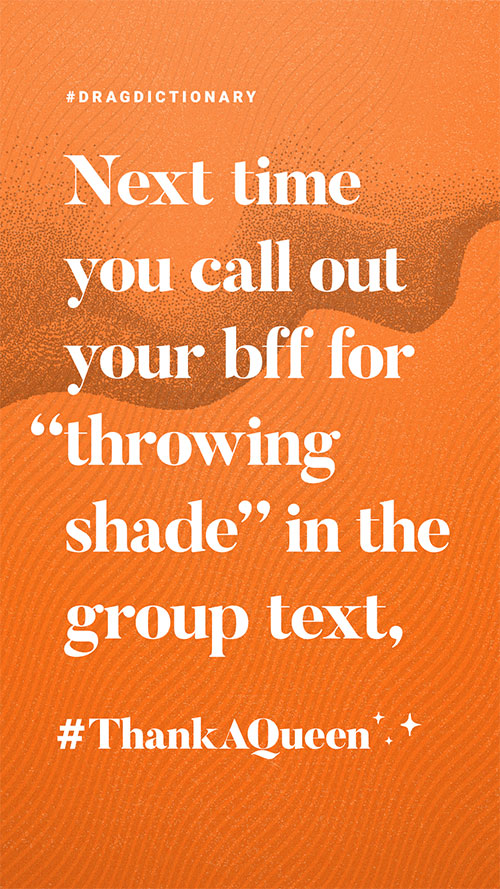 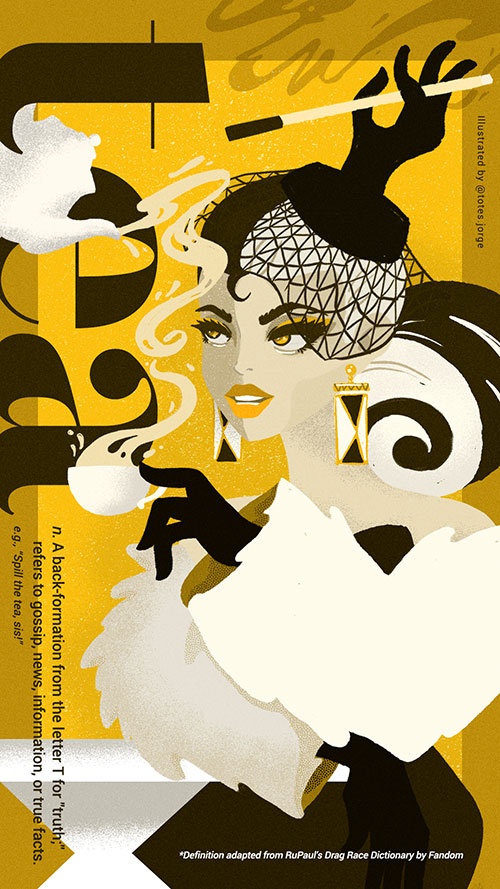 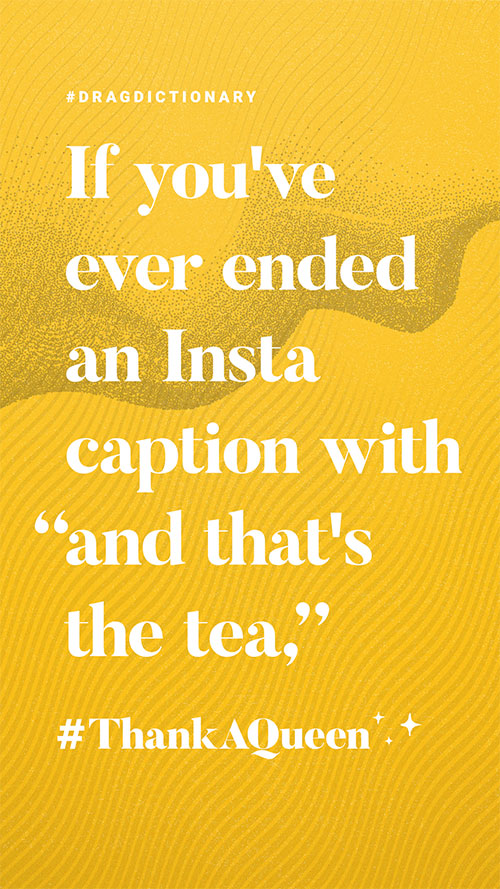 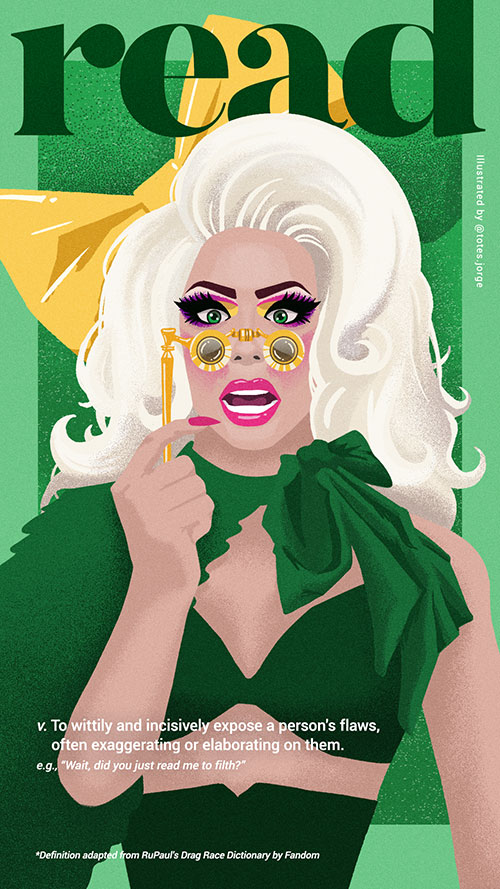 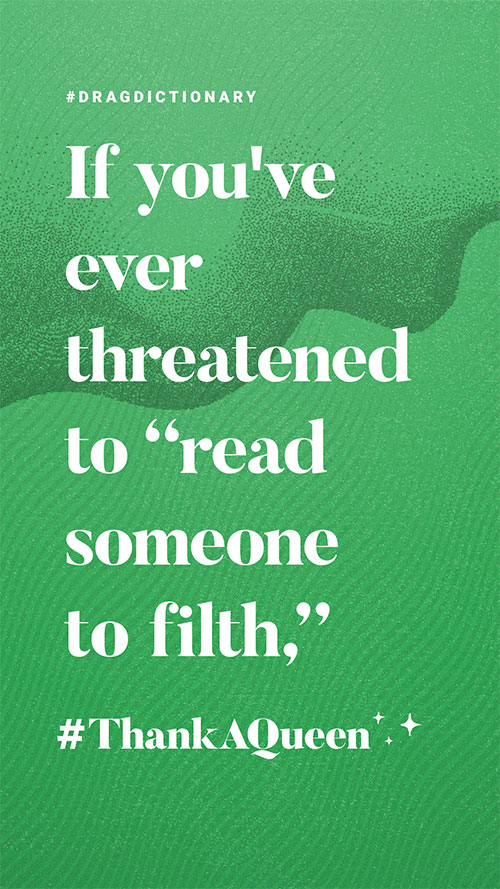 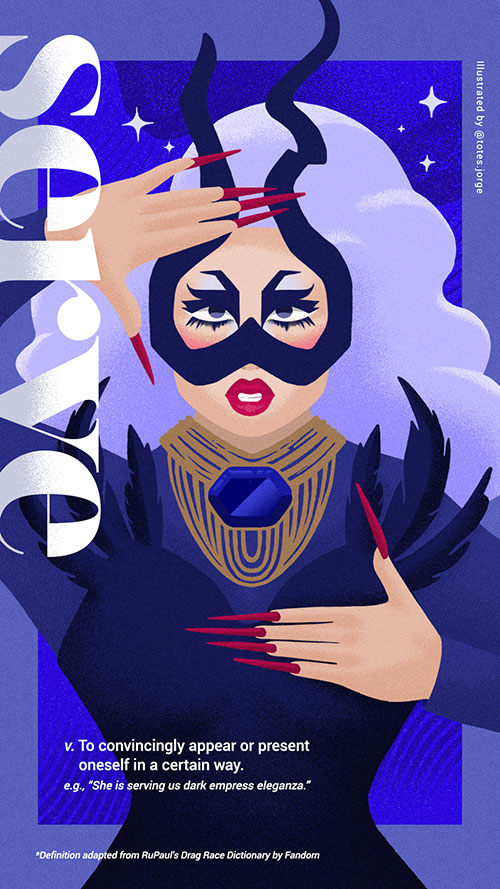 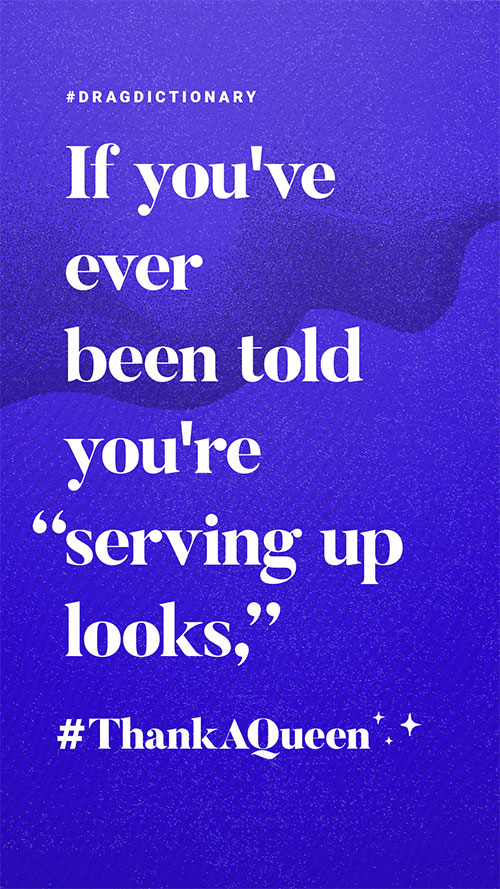 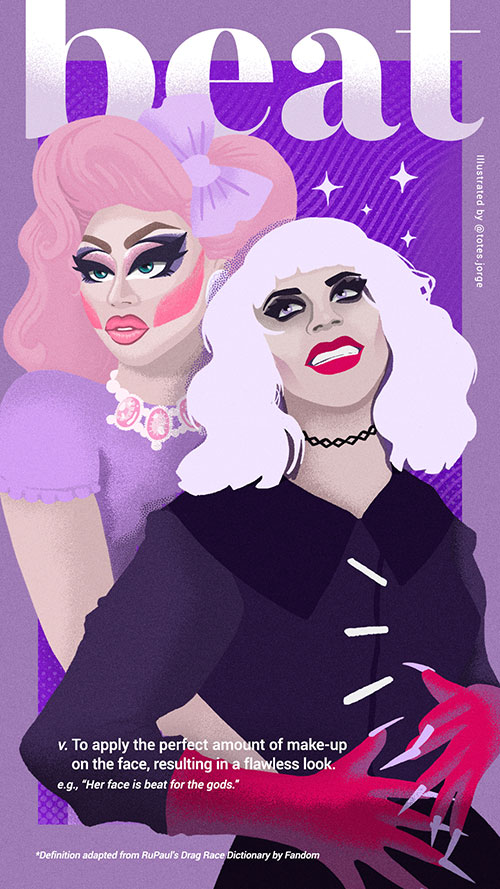 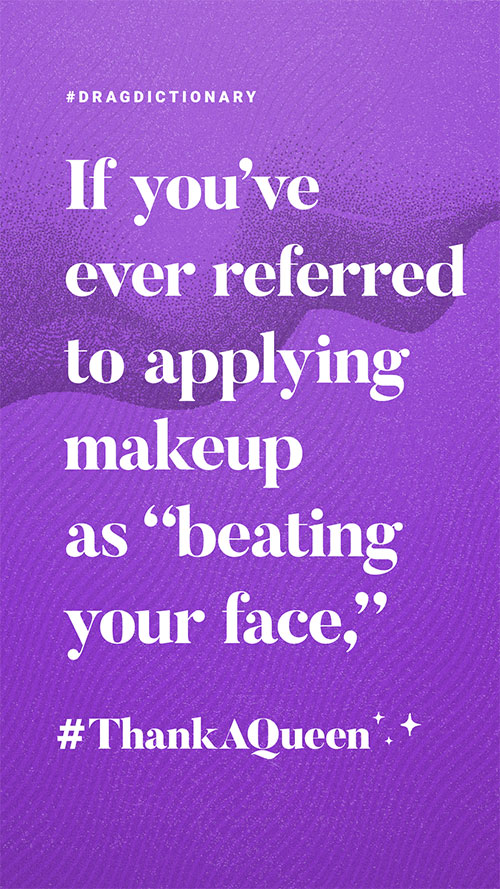 We spoke with Andrade further about the project.

Muse: What were the origins of this project?

Jorge Andrade: This project originally started as a passion project for "Voices of The Many," an agency initiative that encourages agency leaders to share their points of view on any given topic of interest. As someone who identifies as part of the LGBTQ+ and Latinx communities, I thought it would be great to shine a light on the heritage of today's pop vernacular. So many of the words we love to use in memes and in social media have deep roots in Latinx and Black Femme subcultures, so I wanted to make sure to shine a light and give credit to these marginilized communities for their contribution.

Additionally, I wanted this mini poster series to showcase the color, positivity and vibrancy of our LGBTQ+ community and chose my favorite Ru-Girls to be the face of the campaign. Although most of these terms existed prior to RuPaul's Drag Race, it is hard to deny that it was this hit series—in addition to shows like Queer Eye and Broad City—that have helped inject this vernacular into today's mainstream culture.

How did you choose the six words?

The words selected for each poster were chosen very tactfully and through a bit of a vetting process. Although AAVE and LGBTQ+ lingo is very extensive and lush, I wanted to make sure that the six words featured in my poster series were ones with deep roots in the drag community and which represented popular usage in today's pop vernacular.

Can you describe the visual style of the posters?

I've always been inspired by the minimalism and geometry in vintage Art Deco posters, so I wanted to create this poster series with a nod at this specific style, but with an added contemporary spin. I knew the typography would be a big part of these posters, so I made sure to implement it into the design and treat each one almost like its very own fashion editorial cover.

Can you talk more about how RuPaul's Drag Race has influenced you?

Call me biased, but I feel like RuPaul has been a very important figure for us in the LGBTQ+ community in terms of bridging the gap between the mainstream public and, well … us. It was through RPDR that a lot of this vernacular was able to make it into the mouths and keyboards of your everyday American. The show itself has not only influenced me to be more open about my identity, but also to celebrate my individuality and "live my very own fantasy" in whichever way I decide to define it.

How did Merriam-Webster get involved in the project?

Once the posters were created for Voices of The Many, we realized the potential they had to deliver a message beyond our agency walls. So we treated this like we would any client project and assembled a group of creatives and copywriters led by our internal marketing and communications team here at The Many. Once we landed on the idea to "Thank a Queen," we reached out to Merriam-Webster to see if they'd be interested in partnering with us to help celebrate and credit these communities for their contribution—after all, they are language experts with a broad reach and a brand, essentially, that remains culturally relevant via social media. Their response to the mini campaign was beyond positive, and their team has been nothing but supportive and a pleasure to work with. They were on board with the idea from the get-go and helped us do additional research to make sure we were providing people with the appropriate facts and documentation of where these terms originated from.

What else should we know about this project?

This project is meant to simply showcase love and appreciation for a once-marginalized community and for their contribution to the witty verbiage and sassy mannerisms we love to use across the internet today. They've provided us with a chuckle and a way to compliment or side-eye our friends without hurting any feelings.

This was a 100 percent organic awareness project, and it's great to see so many people engaging with it. I was "gagging" when I saw that some of the Ru-Girls even shared this on their social channels, like Milk and Valentina. It was also shared by @LGBT_history, which means a lot because they have the power to reach so many people to make them feel heard and understood. All of the comments are exactly what we hoped for—to get people talking and having conversations, building awareness. We also have some ideas for this campaign to continue ... so stay tuned!