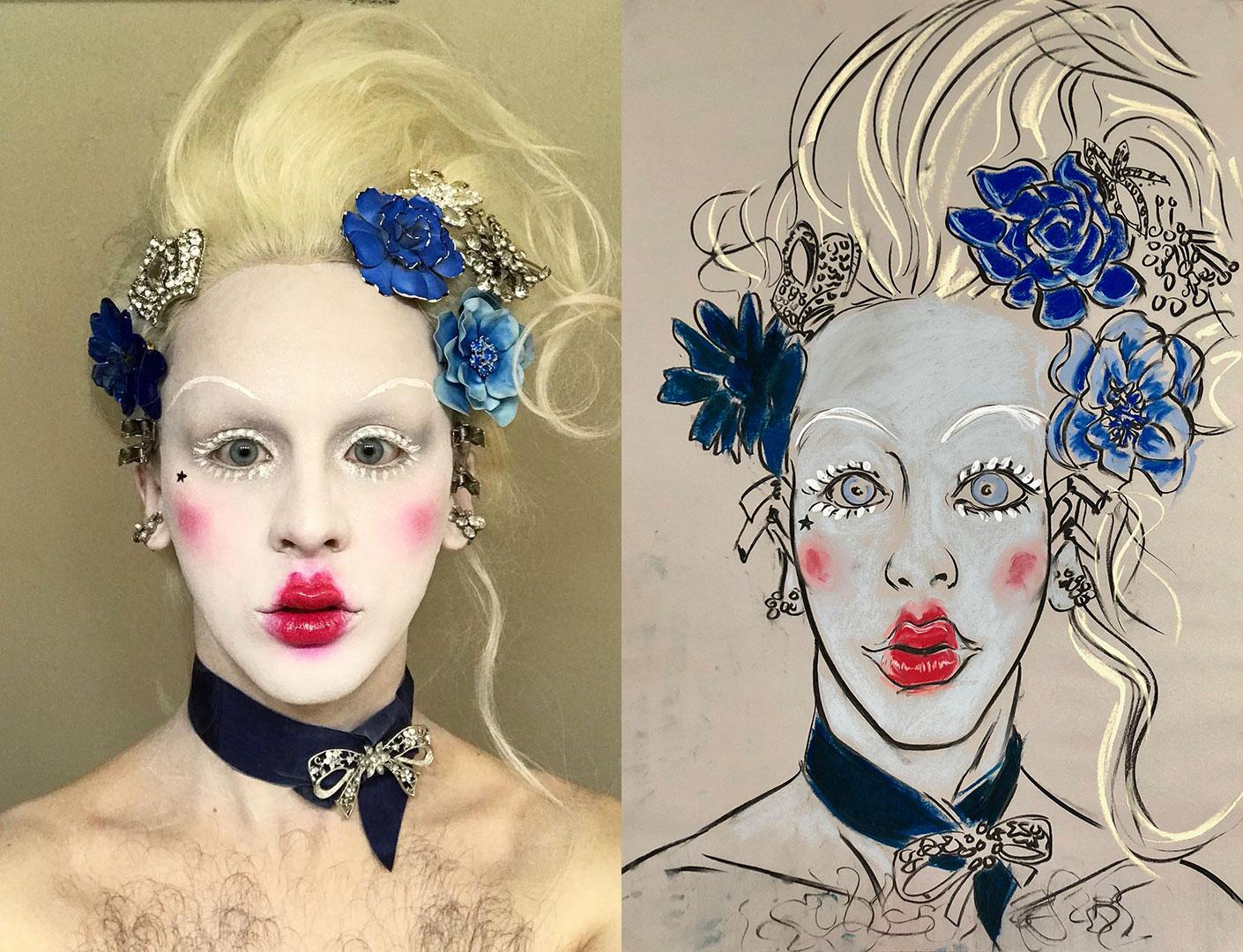 Meet the Ex-Adman Who's Turning Influencers Into Art

Jared Hendler saw the rise of influencers earlier, and more intimately, than most.

The South Africa-born artist worked with plenty of them when his career in advertising shifted in the '90s from traditional to digital. Working at agencies like Edelman Digital, Katalyst Media and MWW Group, he saw the rise of unrecognized and underserved voices—who suddenly had a platform to reach thousands, even millions of people directly.

Hendler, who had always made art from an early age, was so enthralled by these personalities that he began to draw and paint them. After all, no one else seemed to be doing it, and he felt they deserved portraiture like any other shapers of society.

He works mostly in oil and charcoal, so much so that he uses the Instagram handle @oilandcharcoal and the website oilandcharcoal.com. Most of the portraits are based on the influencers' own selfies, exploring their public creation of personal identities. 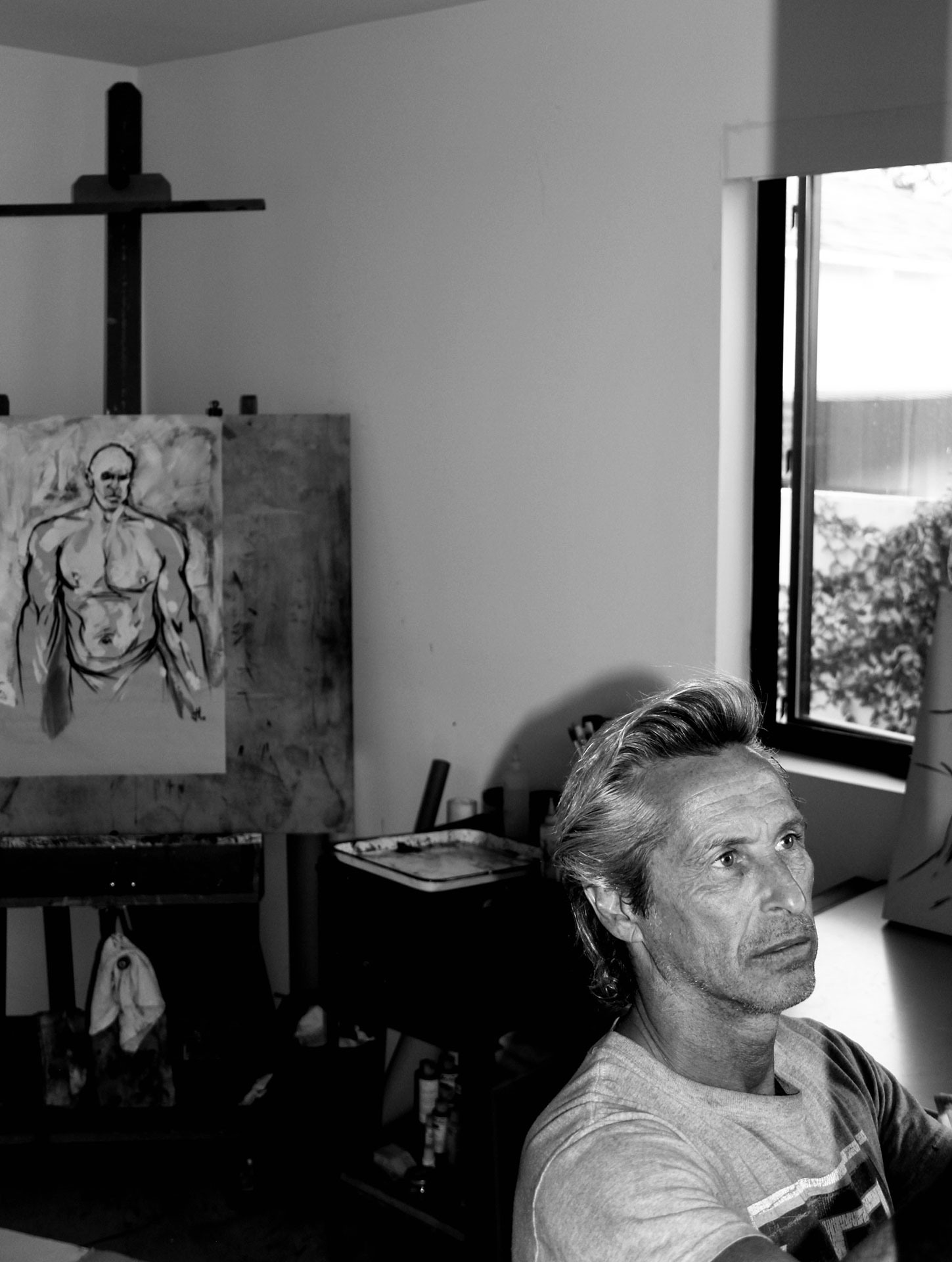 My work documents the effects that technology and social media culture have on our society. I am fascinated by our need and obsession with creating our own identities; selfie culture—some banal, creative or just plain ludicrous.

From individuals simply seeking connection to others with wider ambitions who make a living by growing audiences that eclipse those associated with traditional celebrity. While some are driven by pure narcissism, the underlying human need to connect with others on some intimate level is the most interesting as it requires us to publicly expose a part of ourselves not often seen. The public creation of personal identity, combined with the emergence of a "new" celebrity for a new era is what I bring to life in my work.

My portraiture is taken directly from the feeds of those who impact our society and influence our culture. A static, analog recording of the digital feed before it disappears. My work is a reflection of who we are now. 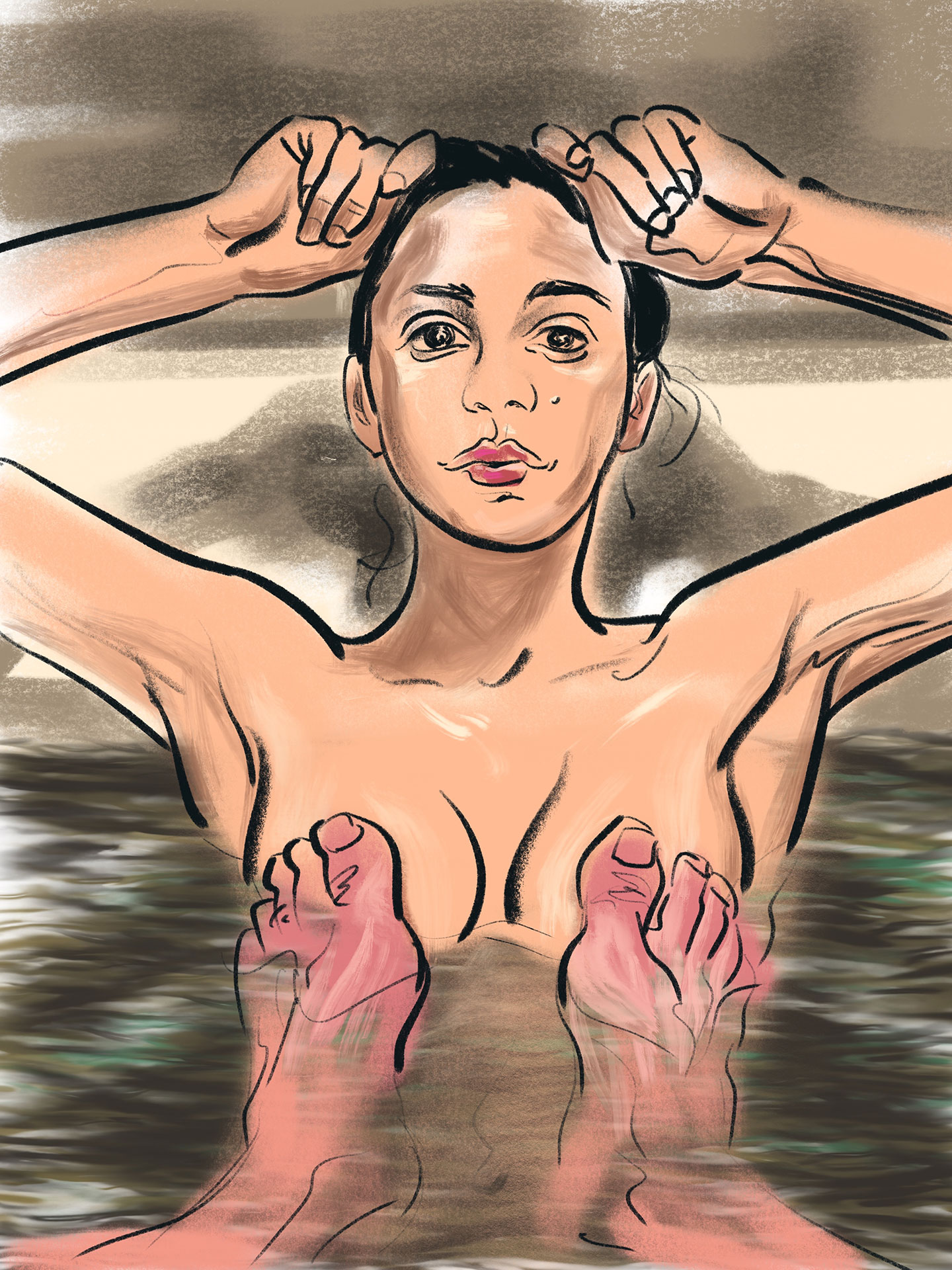 We spoke with Hendler recently about his background, process and some of his favorite influencers and works.

You come from an artistic family. Your mother was a painter.
My mother still is a painter. She lives in Cape Town. I grew up on comic books. Sometimes my work can sort of take on that tone—graphic novels, mainly European stuff. I grew up on Tintin and Asterix and all of that. I've painted and drawn my whole life. When I emigrated to America with my dad, I actually was a cartoonist when I was in my teens. I was one of the youngest syndicated cartoonists in America. I ran in small local publications in Southern California.

The short story is, I ended up going to ArtCenter in Pasadena, got my BFA there. Then I made my way to New York. And while I continued to paint, I worked my way up in the agency world as an executive creator director and then ran digital divisions of agencies. I sort of jumped around, as one does in that business. The first half of my career was in traditional, doing television and print. But I was always an early adopter of technology, and I switched over to digital. The last half of my career was all digital, social media, influencer, content based. 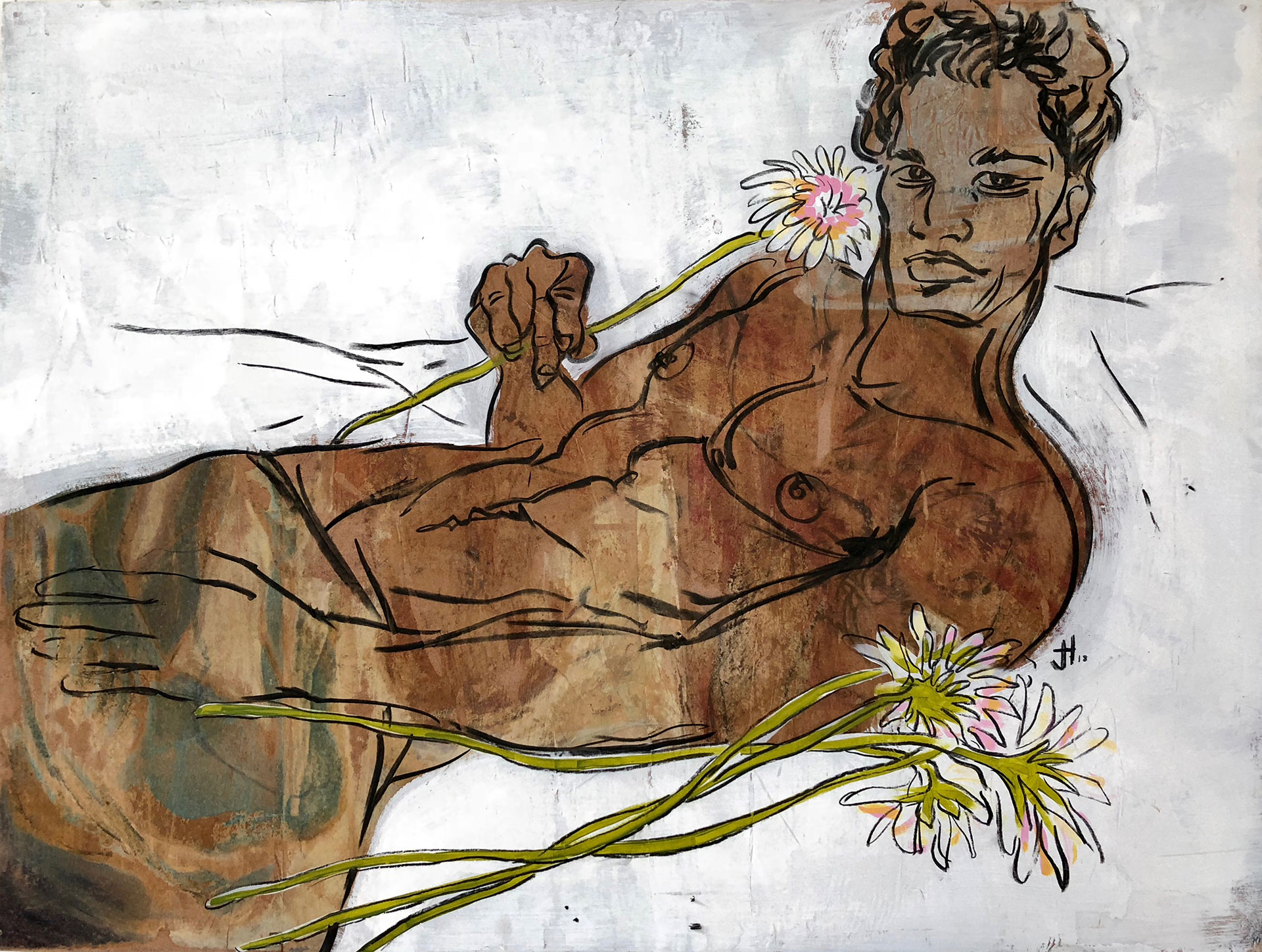 How did that affect your artwork? It seems like it eventually led you toward these portraits that you do now.
In the beginning, it was more of an escape and a release. I don't know if I consciously tried to keep it separate, but it was very separate from my work. But you're absolutely right. I became very interested in what I was seeing happening online. I got very interested in content, and I just liked the whole democratization of media and what was happening with technology. I loved the fact that anybody could now speak directly to an audience and build an audience without going through a large media intermediary. I got to know some of these influencers and worked with them on some campaigns. And it was just a natural migration. I was doing figurative work anyway, and I was like, "Wow. No one's doing portraits of these people."

You meld that together with how underserved voices—whether they're bi, or trans, or any minorities—could now have a voice. So I started doing portraits of these people. And I'm using old analog methods. I do use an iPad, and I do use some technology, but it's an old-school approach to doing portraits of these folks who live in digital. I feel like it's important to freeze the moment in time before it just disappears. 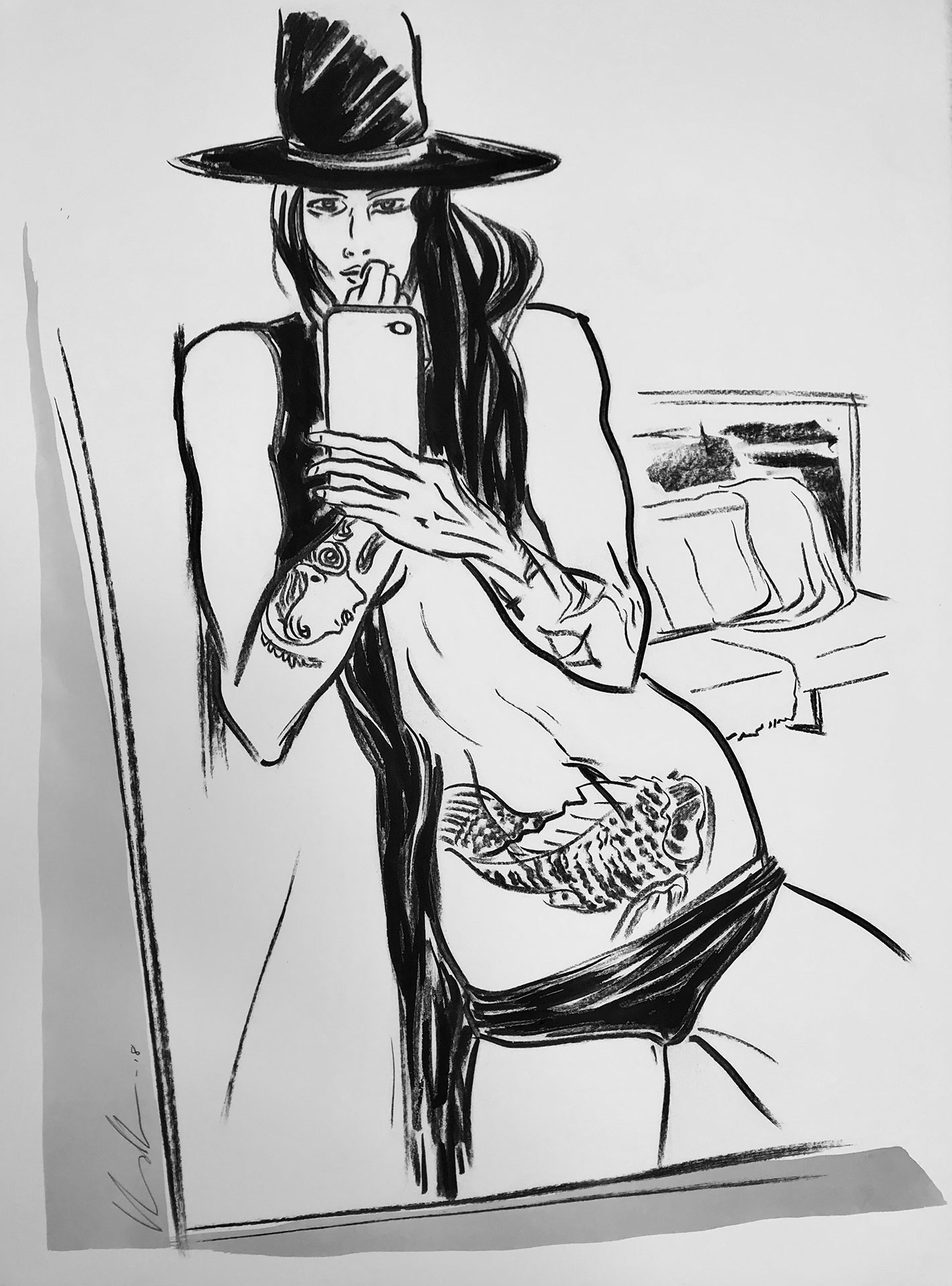 Do you work off the influencers' own photos of themselves?
Yeah. I try to avoid really big celebrities, unless they're really interesting. I'm trying to mainly focus on people who are building a following directly through digital and social. The big celebrities who are celebrities regardless of social, I typically don't do. There's a couple of them I do do because I find their social feeds are so interesting and they really are transparent and authentic on those feeds—somebody like Lady Gaga or Casey Spooner from Fischerspooner.

I'm doing portraits directly from the photos, the images they're posting on social. I tag them, and in most cases they respond and I start a dialogue and a relationship with these people. I'm not doing it so they respond. There's many people who don't respond, and maybe they think I'm mocking them, which is possible. And I'm not. To me, it's about putting them on a pedestal, to be honest, because I think what they're doing is amazing. A lot of them are very brave with what they're doing. No different than a David Hockney doing a portrait of anyone they admire, like any artist has done portraits. I tend to choose the more flamboyant and colorful imagery because it just looks better in art. 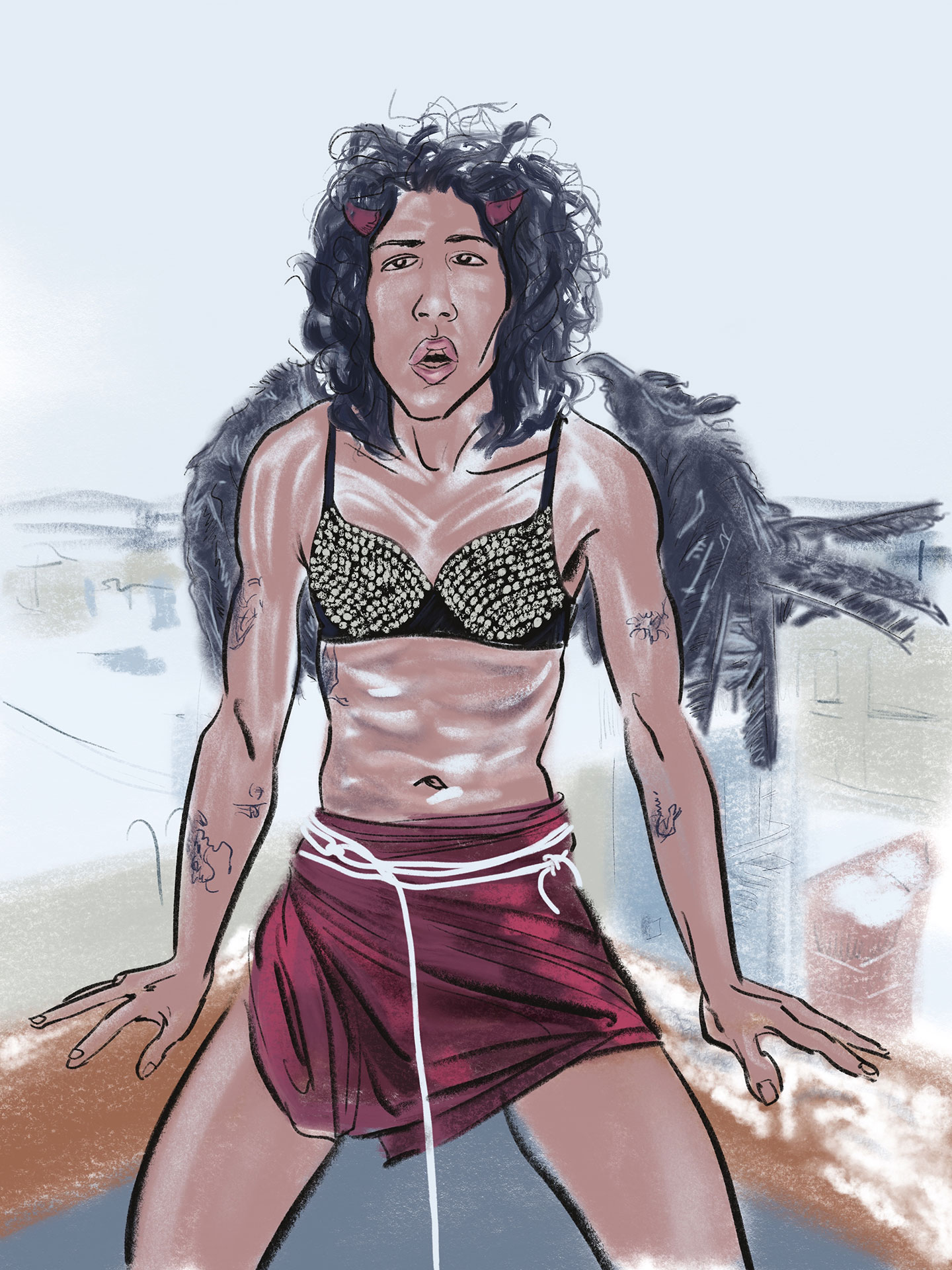 What materials do you use for the work on paper?
I draw. I'm in the studio every day. I'm typically drawing very fast with charcoal on newsprint. I do many versions until I'm very happy with a version. Those are the roughs that I post on Instagram. I've done a series of a couple of guys who are big in the drag world, and I've done those on newsprint, as well. I will then take those original drawings, and I'll use a projector and blow them up large. I will trace my own work for the paintings. And those are typically a mix of charcoal, and oil paints, and oil sticks. It's really a mixed medium. But the primary medium there is oil and charcoal.

Can you tell me about some of your favorite pieces you've done, and what you like about them?
Sure. There's someone undergoing a transition whose Instagram name is @imp_kid. Her whole demeanor and everything changes when she dresses up in these elaborate costumes supported by makeup, props and everything else. I find her to be more fascinating because she is not hiding behind her transition. She takes photographs. Still dealing with body hair, but moving through transition one step at a time. Clearly the decisions being made are not easy. She livestreams giving herself estrogen injections. When she does her show on-stage in New York, she will often do an injection in the middle of her performance and talk to people about the transgender process of transition and how hard it is. 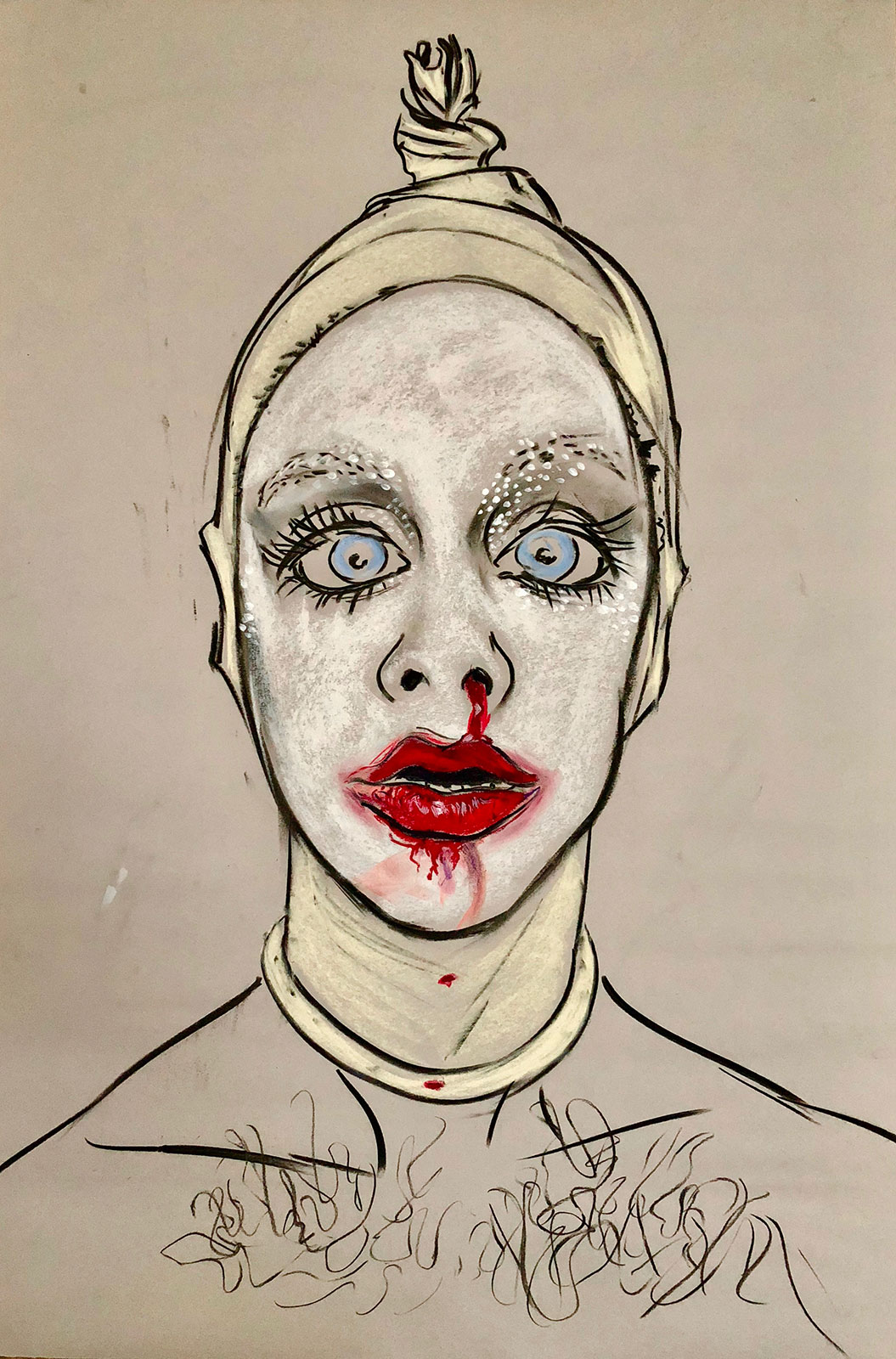 Casey Spooner from Fischerspooner—I've been fascinated with him for a while, too. I mean he's the lead of Fischerspooner, but he's an artist himself. Really interesting and authentic presence on social media. Ran outside of the band for a long time. And he's got a really interesting personal journey, so I've been documenting that. 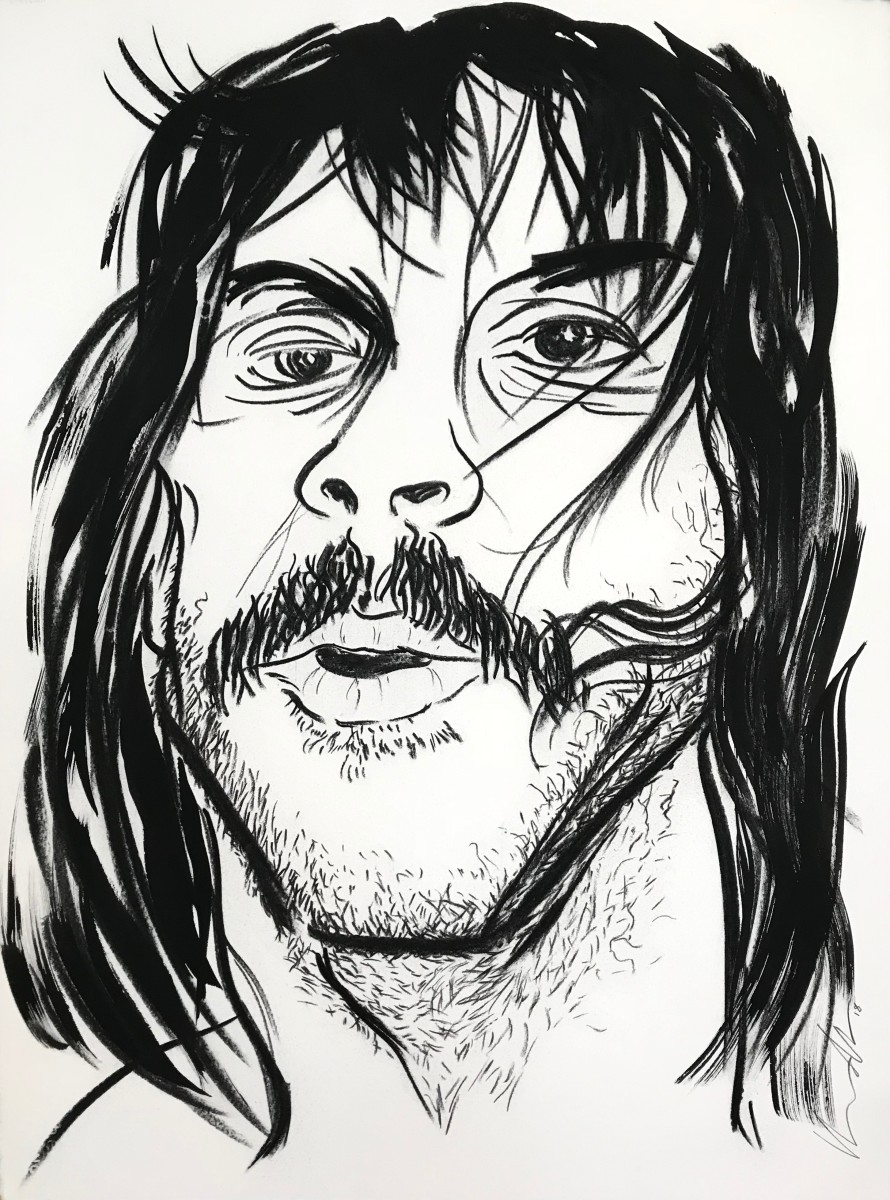 I've also been fascinated with doing ballerinas, for many reasons. I've been a ballet fan ever since I've lived for New York and gone to BAM and Lincoln Center and the Joyce and all of those places. Ballet dancers—their names weren't at the forefront, they were usually hidden behind the ballet company or the choreographer. But now, all of these ballerinas are busting out and creating their own celebrity because of social media. I found that to be really fascinating.

I love drawing people in the art world. I did a portrait of Jerry Saltz, who's the New York Times art critic and recently won the Pulitzer for criticism. I did a portrait of him, and he loved it and he wrote to me. That was really amazing for me, just to be recognized and he liked the portrait. 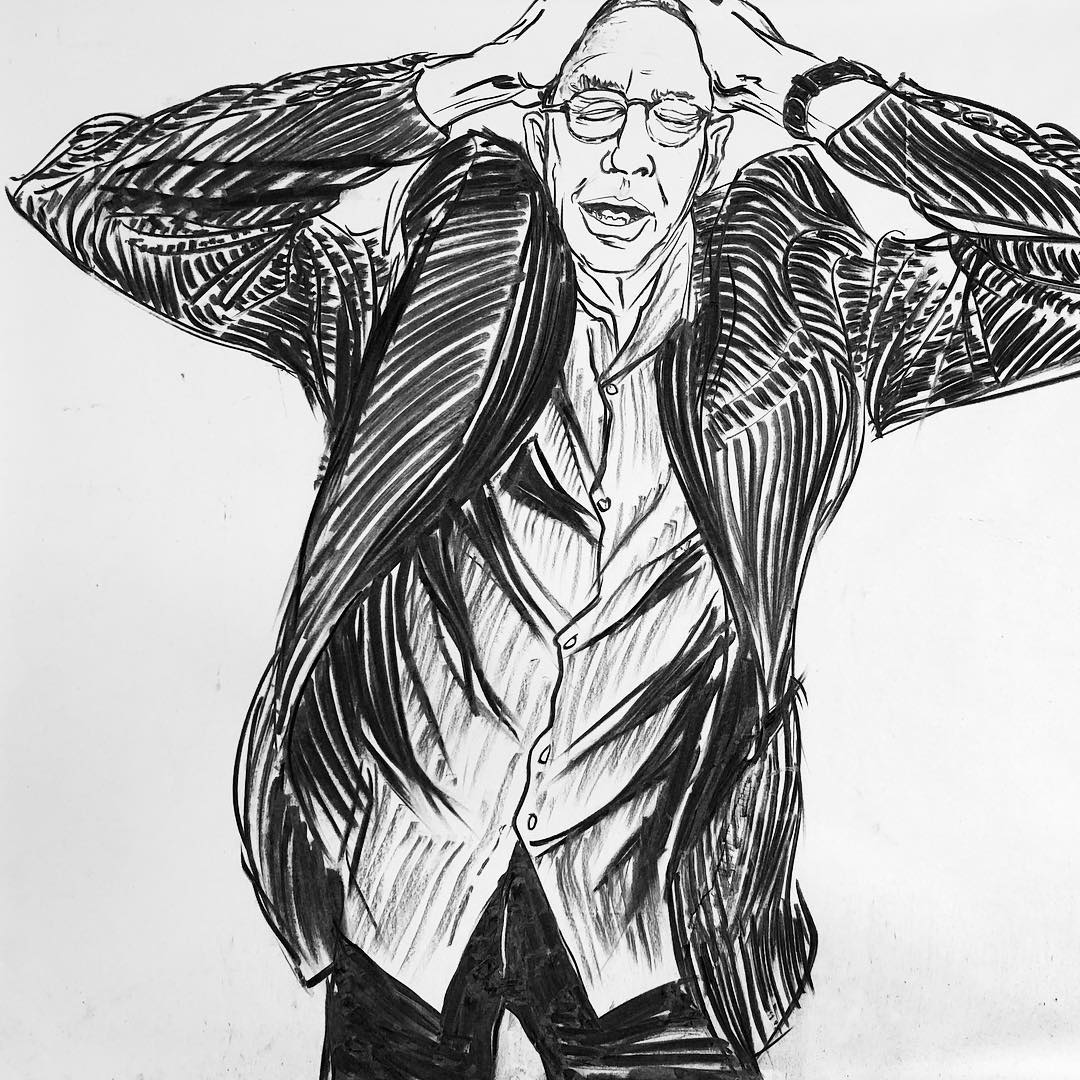 I did some portraits of Stefan Simchowitz. He was written about in The Economist and by a lot of the large art magazines. He was called the patron satan of the art world because he's really trying to shake up the art world. And there was a great article about him in The New York Times. So I did a drawing, which got some chatter in the art world, basically him posing with some of his lead artists, Petra Cortright, Zachary Armstrong. 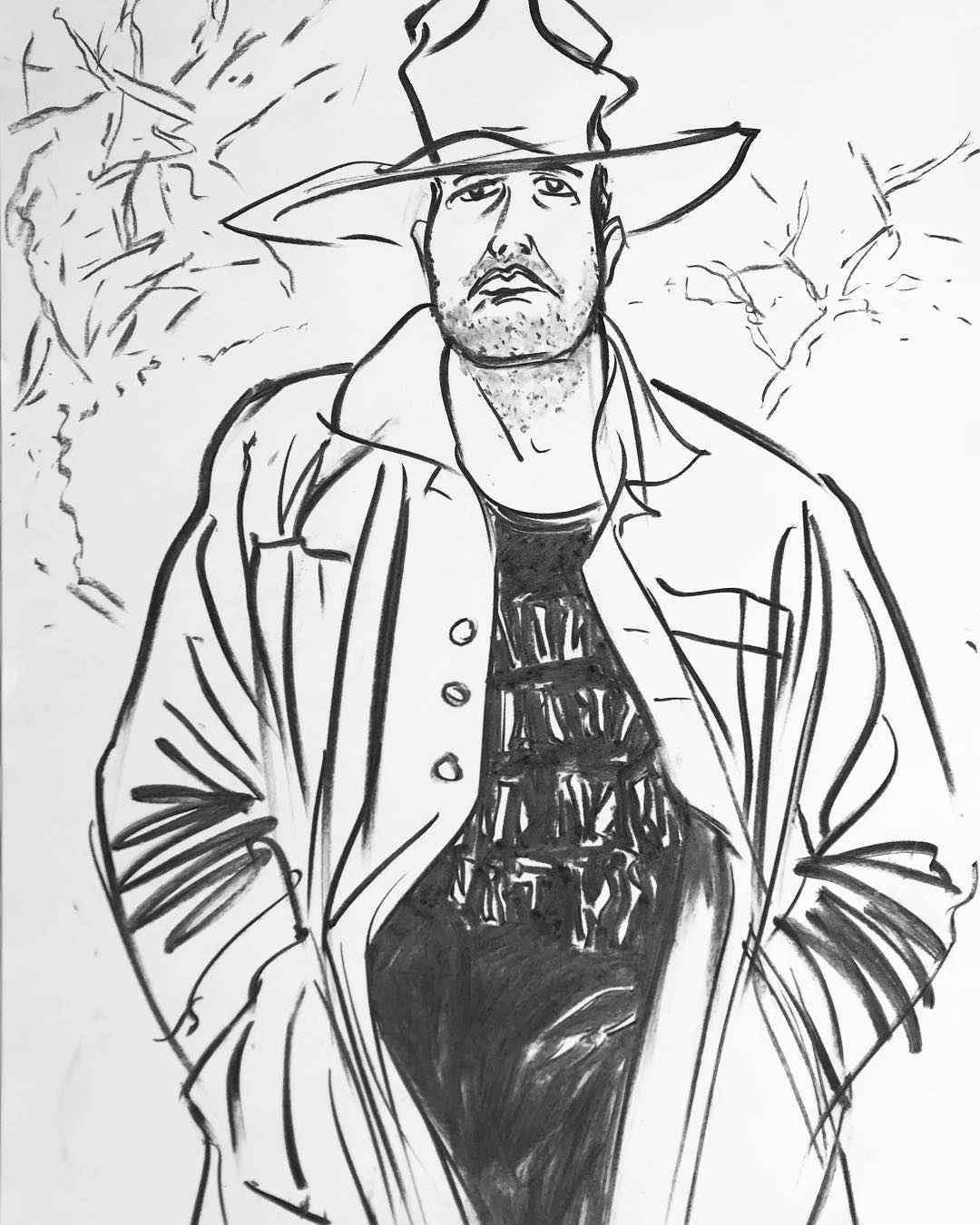 I also love Alok Vaid-Menon, their handle is @alokvmenon. Alok is drag. Fabulously creative. Indian with dark skin. The bright makeup and colors that contrasts with their skin is unbelievable. So they are pretty amazing. 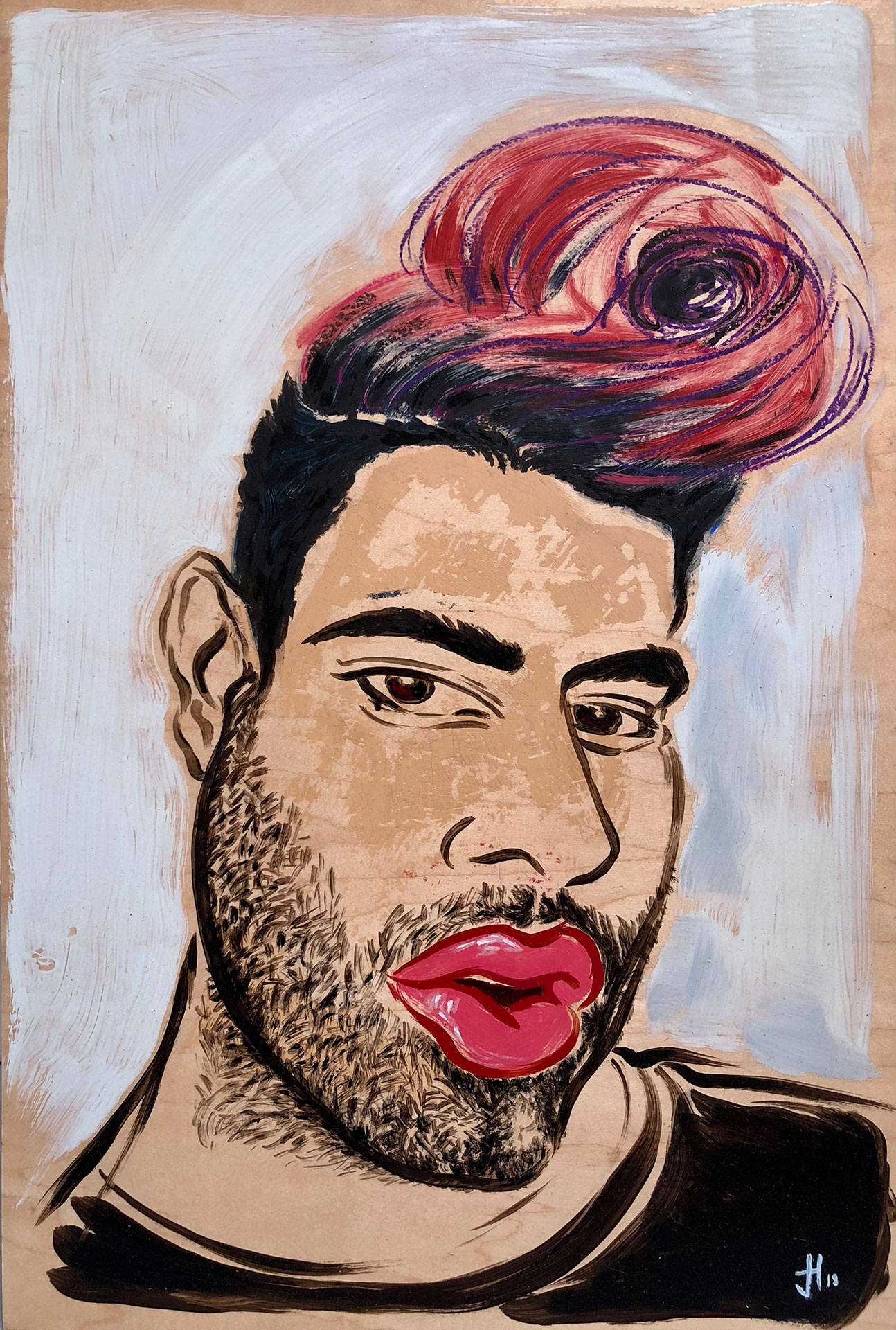 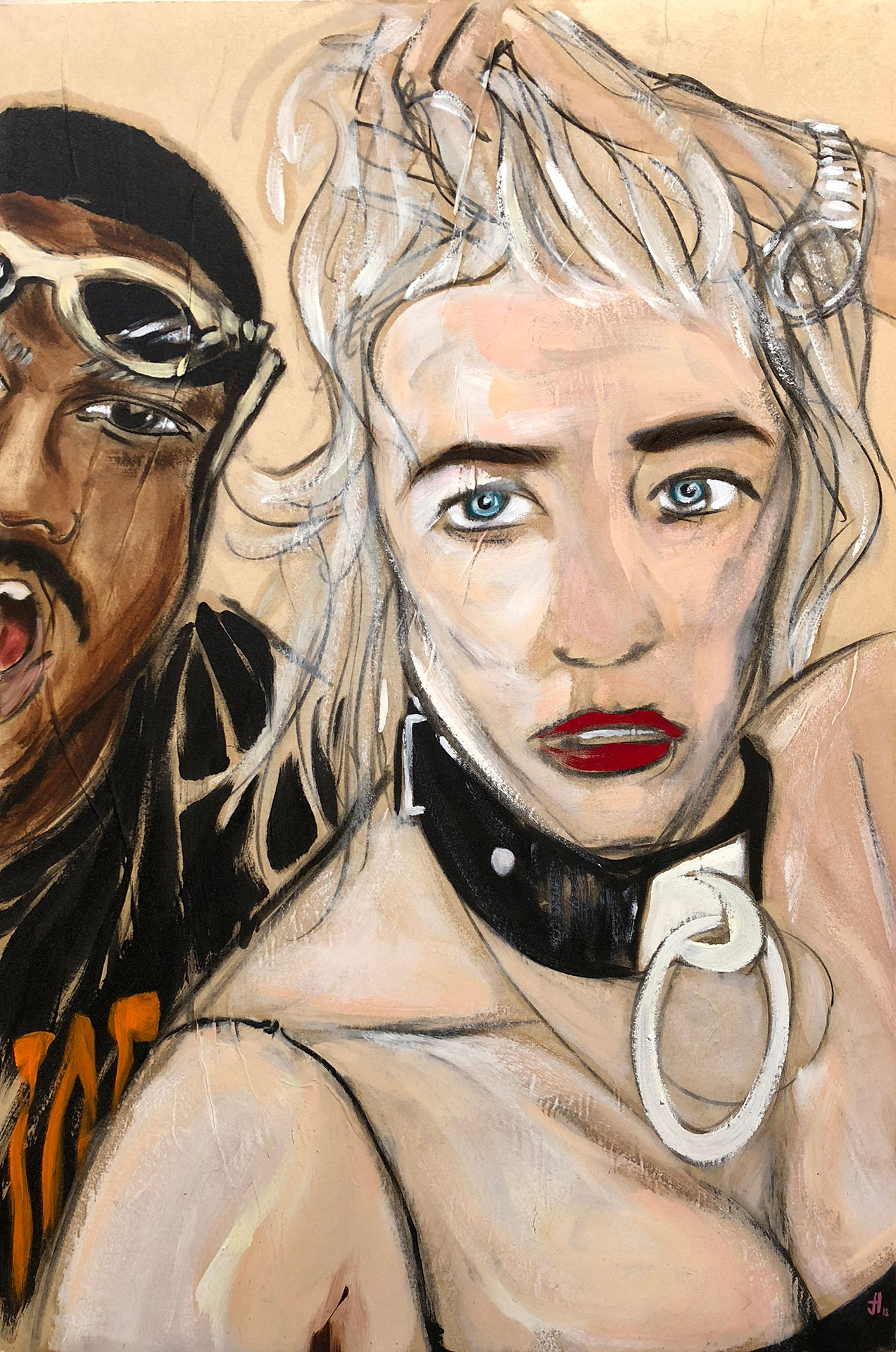 The issues of identity in your work are interesting. You've got the source material, which is somebody framing themselves in a very deliberate, very mediated way. And then you do another version of that image. Can you talk about the conceptual complexities in your work?
I try and stay pretty true to form, but because I have a graphic background, they tend to be accentuated in some way and exaggerated in some way. I just naturally tend to exaggerate the parts of the image that I think are apparent in the original photograph. Often, when people see the drawing and then I show them the photograph, it's not that they like the drawing better—but they get the photograph better after they've seen the drawing. I'm trying to capture the mood and what I feel like is the raw essence of the original image as much as I can. I'm not trying to invent anything new. I'm just trying to bring out what I think is already popping.