Drawing support in the time of Covid 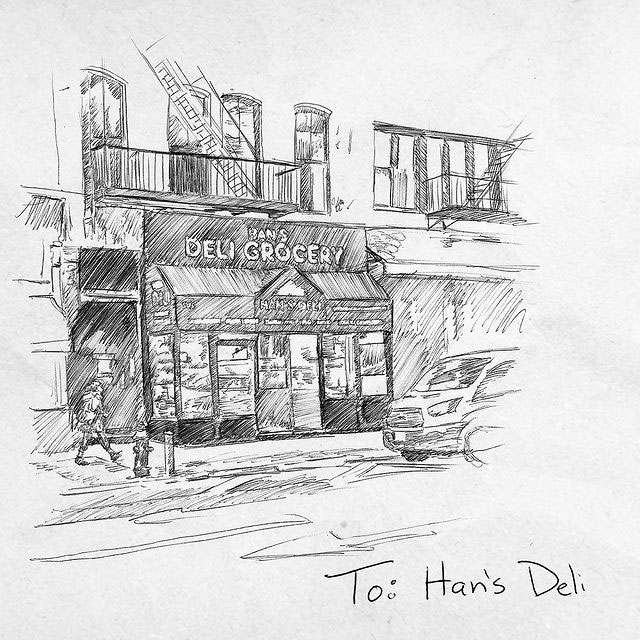 With Covid still ranging, such moments are increasingly rare. That's especially true in New York City, where most agency offices remain closed, and independent businesses, particularly restaurants and bars, are fighting to survive.

Against that backdrop of uncertainty, a passion project from Johannes Leonardo reflects the profound bond folks forge with the places and spaces just beyond the walls of their cubicles and conference rooms.

Heartfelt "love letters" and hand-drawn sketches pay tribute to some of the creative shop's favorite NYC establishments. Posted across JL social channels, the work acknowledges such venues as the lifeblood of thriving neighborhoods and seeks to steer consumers their way.

Illustrated by agency art director Austin Haas, the project launched with a celebration of Lil' Frankie's pizzeria on the Lower East Side:

"We had our first meeting, all four of us, at Lil' Frankie's, the day before we opened our doors at JL," agency co-founder Jan Jacobs writes in the copy. "Delish pizza and a bottle of red wine. Little things lead to big things."

"'Lil' Frankie's is anything but little to us," adds co-founder Leo Premutico. "We look forward to being back as soon as we can."

Simple, stirring and a tad wistful, the work recalls shared struggles and good times as it strives to breathe new life into beloved haunts, so they won't fade away, ghostlike, before the pandemic scourge recedes.

"For years, we had built up a small, invisibly knit community with the restaurants, cafés and bars in the neighborhoods surrounding the Johannes Leonardo office in NoHo," agency creative director Jeph Burton tells Muse. "When you're separated from that community—or worse, when that community comes under threat, as it has from Covid-19—you can't help but remember that New York is a special place, because it's made up of many special places. The idea that those special places could go away—it panicked us, to be honest."

"But in times of crisis," he says, "you always go back to what you know. So we asked ourselves, can art and copy do good? Can those fundamental skills we've honed for the rest of the world work for our communities?"

"I Love Letter NY," as the project is known—a play on the state's iconic tourism slogan—represents JL's answer to those questions.

"Love letters are such an iconic expression of affection when separated from someone—or something, in this case—that you care about," notes Hunter Hampton, also an agency CD. "The additional dose of intimacy that comes from someone taking the time to hand-sketch a likeness really felt like it had the power to communicate the sincerity we're all feeling. The hope is to remind those in the area just how much these local businesses contribute to their lives here, and to swing by and support. Even if it is just to test the accuracy of our illustrations."

While specific to the JL experience, the approach feels instantly accessible, and affecting, because we all have go-to shops and eateries near our homes that enhance our daily lives in special ways. (Pepsi and VaynerMedia's campaign backing hard-hit NYC bodegas channels a similar vibe.)

"We hope the idea can take on a life of its own and expand beyond just our neighborhood," says JL copywriter Josh Lampley. "The hope is that the more love people put out, the more business will come in."

The agency invites others on social media to share their own appreciations for the city's small businesses on IG using the #ILoveLetterNewYork hashtag and these special templates:

"You never know who's looking at your feed," adds project illustrator Haas. "There's always a chance that your 'Love Letter' might be all someone needed to see to place an order or pay one of these businesses a visit."