How I Traded Art for a Cameo in an HBO Documentary

Scenes from one of my favorite creative swaps

Two decades deep into an advertising career, I was well acquainted with the different facets of production. The set of HBO's newest documentary, Alabama Snake, was no different.

Everyone on set respected the crew, they have job to do, so try to get out of their way and let them work. The lead actors were treated like delicate flowers, so don't make too much eye contact. The director is who everyone is looking up to and pining after, but it's also the person carrying the most visible stress.

Way down on the opposite end of that list, below the craft services, below production assistants, is a disparate group of people who are seen shuffling around from plastic folding chairs to their specific marks on set; they are known as extras. Some may even refer to themselves as "background artists." People who take their art seriously by pretending to walk somewhere, have a fake conversation, or perhaps eat a hoagie in a believable way. They are there to represent the strokes of reality beneath the main action in the foreground.

And on that muggy July morning in Alabama, I was part of this clan. 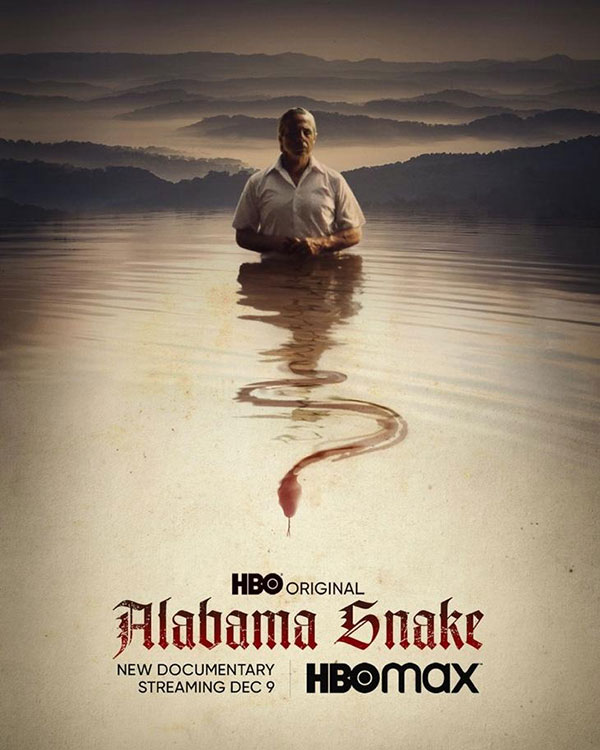 It was 4 a.m. when the extras were called to set. We were led through the grass and mud on our way to set. There on set they told us where to stand and what our action would be. At this point, I noticed a fellow extra kept eyeballing me. I looked up and he immediately got right to the point.

"Are you an actor?" he asked.
"Nope," I said, seeing no reason to sugarcoat this.
"Have you ever done this before?"
"Nope."
"No acting classes? No high school plays? No nothing?"
"Nope."

He had a chuckle, unearthing exactly what he had suspected. At this point, however, we were seconds from rolling on our first scene, when this man said something I'll never forget. "Well, let me give you some advice. Just pretend that it's all real."

The look on his face made it seem as if he was letting me in on the secret of life, while all I could think about is how much Larry David would appreciate this situation I had gotten myself into.

Let me take a step back to explain how this whole thing came to be.

Well before I started a career in advertising, I was always drawing and painting. Pretty much for as long as I can remember. It was a constant in my life that persists to this day. I would go through phases drawing cartoons, then portraits, working on type and lettering, and when the movie Superbad came out, friends and family members were calling me to ask if I'd seen the movie. It's because of a sequence where Jonah Hill's character goes through a period of adolescence obsessively drawing phallus-inspired illustrations. This was oddly similar to a phase of my own.

But alas, we grow up (kind of). Still, the creation of art remained. By 2013, I had moved from Sacramento, California, to Las Vegas, where I was working on the "What Happens in Vegas, Stays in Vegas" ad campaign. My boss at the time was looking to extend the campaign's thinking beyond broadcast television, into other thought-provoking areas. My mind was racing in this space when I brought that same line of thinking to an unanswered question in my personal life: What should I do with my art?

I had a lot of art, but I knew I didn't necessarily want to show it in a coffee shop, where it would surely sell for less than I would want, or more likely, not sell at all. I thought about what I would want for these pieces, and the answer came clearly and immediately: I want other art. I kept pushing, thinking beyond that, and quickly came up with the idea for a platform where I could trade my art for anything but cash.

The vision was realized, and ArterBarter was a thing. At least, it was in my head. From there, it took a couple years to actually get the website made, and flip the switch. By this time, I was now at a new ad agency and living in Austin, but the goal of the project never wavered: generate interesting trades and keep the story going.

In the first couple years, I made 100+ trades for things like shoes, hats, a telescope, an Apple watch, homemade pasta, a bowling trophy, skateboards, video game consoles, furniture, vinyl records, iPads, and yes, plenty of art.

At this time, my brother Bo was producing and acting in an independent documentary directed by a friend of ours. Everything was bootstrapped about this production, so when they shot me a text asking if I could do some poster art for the premiere at the Tribeca Film Festival, I said of course. They wanted to ArterBarter for the artwork, which I loved, but none of us were sure what should be traded for the artwork.

I slept on it, and the next morning I knew what it should be—a cameo in their next movie. They loved that idea as much as I did, and the deal was done. 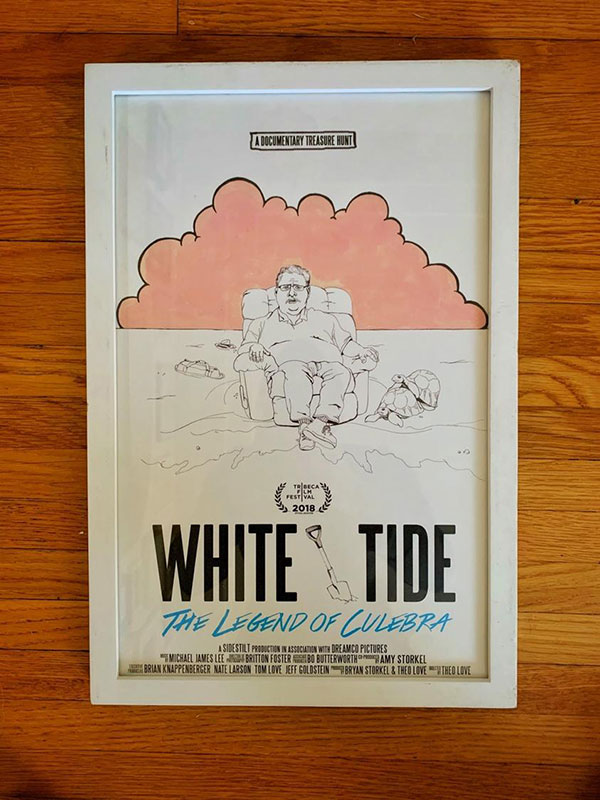 I met up with them in New York for the premiere of what was then called White Tide: The Legend of Culebra. It was a fun weekend, but it was still unknown what would come of White Tide. What came was a Netflix deal, big numbers and reception for the movie, which brought them new opportunities for the next movie. Theo, the director, pitched HBO Docs on a story with snakes, religion and an attempted murder, all taking place in the Deep South. The project was greenlit, and all was set.

I knew right away, that's the part I wanted! The idea of being a random pale butt standing in a field, for this movie, felt just so right.

Unfortunately, that scene was cut before shooting started.

Still, my experience was memorable. I flew in and out of Atlanta, driving over two hours each way to get to Scottsboro, Alabama. I stayed in a lakehouse with Bo, Theo, and others in the crew. When I arrived, they were wrapping up the last portion of the shoot requiring the full crew.

On set, the scene I was in happened to be the very last of the shoot. I was background for most of the shot, but the final reaction shots were going down the line from onlooker to onlooker, as they watched the main character and his family drive away. I was randomly filed in as the last one in line. After they shot my solo reaction, with the sun now risen for the day, they yelled, "Cut! That's a wrap!" 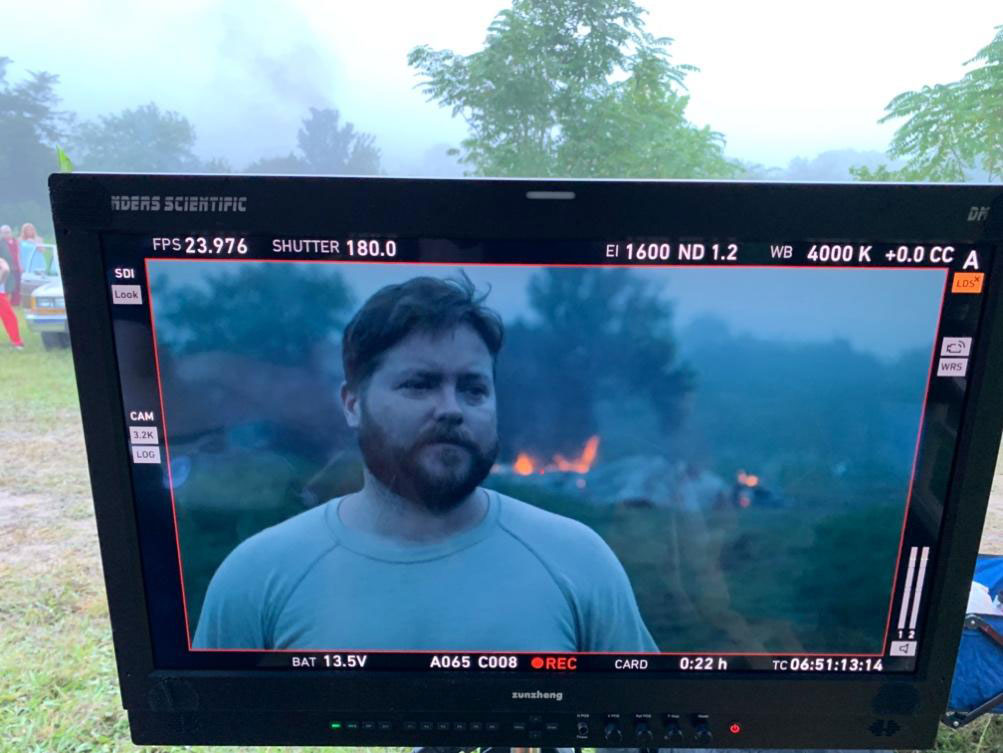 We headed back to the lake house and sat out front drinking whiskey and talking about the shoot. Eventually everyone peeled off one by one and went to sleep. Since that day, Bo, Theo and I still talk regularly and even started another movie treatment together.

As far as ArterBarter, I'm still wheelin' and dealin'. If you'd like to make a trade, let me know. 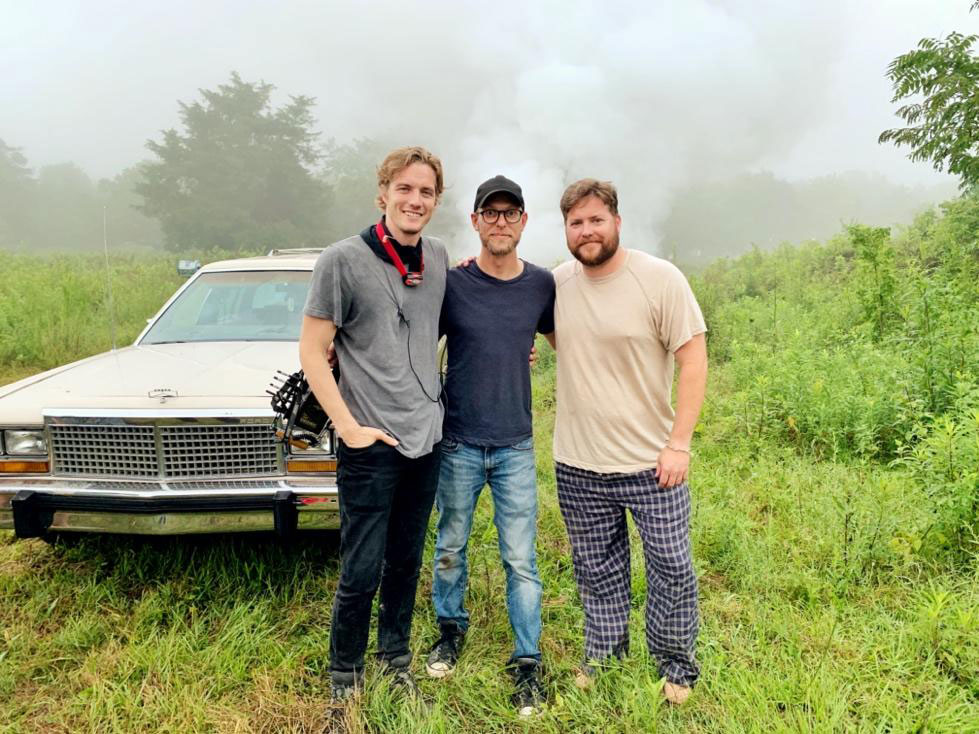 Life is funny. It's easy to get caught up in your own schedule, making decisions by what things cost or how much you might be able to make in any given situation. It's easy to just fall into a routine where life happens to you, not necessarily for you. It's common and understandable, but it's worth looking beyond that if you can.

This morning I was direct messaging with a woman here in Austin to clean my house in exchange for a painting I just made. She'll be here Tuesday, and all the while I'll be wondering once again, "If only Larry David could see me now." 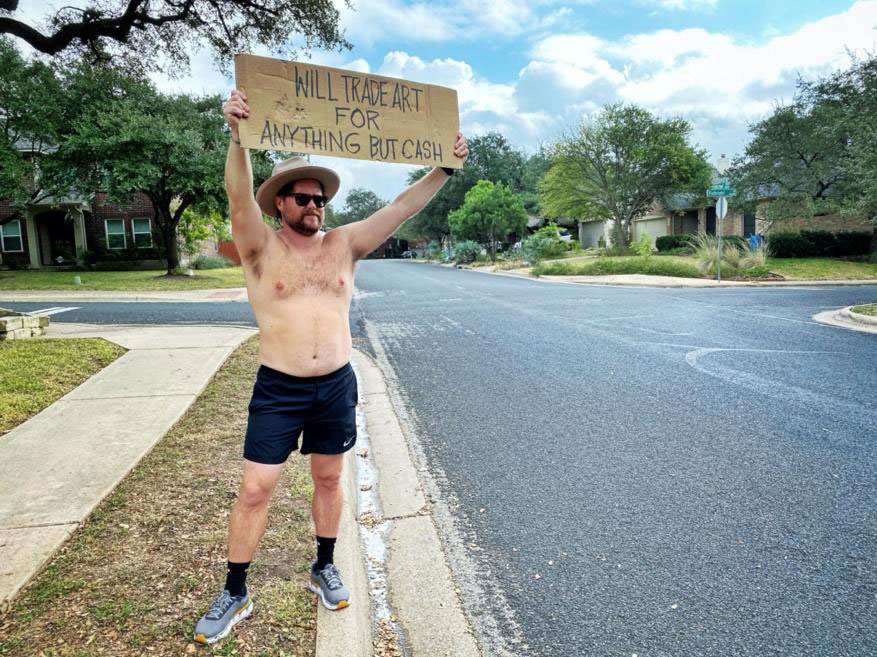 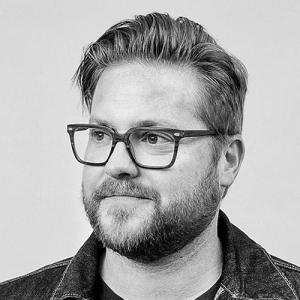