Forgery as an Art

Where does novelty begin and the imitation of it end?

There's a kind of datedness about metaphors that are bandied about haphazardly in marketing. The round holes. And square pegs. This is the theory of conformity in single, sharp difference. The one about lemons and the bitterness of fate. Or how boxes contain our thinking. The most ambitious, if indulgent, is the gesture that art is life is art. Indeed, art is supposedly a mirror that reflects, if mimics, society. It's a medium that both celebrates life and bastardizes it.

It came first through a brief flirtation at the Tate Modern, then again in the heights of Place du Tertre in Paris, and then was confirmed by a small item by Van Gogh in a local British gallery. It was hung brilliantly, a swollen gold frame, the color waxy and thick, the strokes sharp, heavy and spiralling in moody waves of paint. It became life, a scene of it, very much living, breathing, a stolen moment of pure, wicked energy. It feels like a spell, a heavy hypnosis. And yet, it was a forgery.

There is, then, the question of John Myatt. The author of this bold counterfeit, lifting effortlessly the technique, the general tone, and identity of its original inspiration. Myatt buries his crime in the aesthetic of his loving imitations; each brush stroke feels intentionally placed, like it was left there by Van Gogh himself. The slipperiness of its integrity aside, his iconic fakery makes it difficult to distinguish in creative pursuits where novelty begins and the imitation of it ends.

After attracting public scandal in 1995, and despite serving out a brief stint in prison, there are a number of his copies still in circulation. It has become a personal goal, then, to own a Myatt and hang his daring forgery above my office, a quiet rebellion of sorts, against the sensible purchases of my other art, because of its politics, a bizarre denial of originality.

Nowadays Myatt is more wisely marketed as an imitator of sorts, which appreciates his labor as a skill beyond muscle memory and something altogether more valuable. He has learnt a discipline, possibly a dark art, that requires not only creative dexterity but a studious eye with microscopic intensity. This has inspired Myatt's fakeries to eschew the slavery of any one style or technique and instead to forge copiously against a deep history of art. Myatt has riffed on the styles the likes of Marc Chagall and Alberto Giacometti.

His spin on forgery is a slight misdirection in language, too. Rather than cheat his influences, he works "in the style" of them, classified under the banner of "genuine fakes." His earnest tint on forgery, an otherwise dishonest craft, is more a gesture at how he embraces influence to empower his own creative output. Van Gogh's solitary genius didn't seem to inspire Myatt as much as it became the thesis of his forgery—as if to say that Van Gogh's work wasn't just some accidental trick with paint.

What, then, does forgery teach us about creativity?

Fakery is the careful trick of imitation painted to the delight of art fanciers. It's also an economic crime. Yet, where it has roused opinion and dispute, the trading of voices online, the reality of art forgery has become a game of detective work. Critics, those who oppose forgery, argue that it is merely a lapse in proper taste, an amusing sham intended to fool our appetites for art and culture. Others stumble, however, into a sense of praise for it, suggesting that forgery has played the role of educator in the art market.

Art, like the life it imitates, attracts itself to all sorts of crime. And despite the contested genre of pastiche, the exchange of ideas is often said to be somewhat healthy in the creative process. Myatt's dazzling fakes speak wisely to our perception of art: We not always only crave originality, the conceptual value of art, but the sense of human effort behind it, or the creative and physical labor that oversaw its production.

Myatt's formula for success was a study of, and appreciation for, the content of a canvas—its harmony of brush strokes. A fakery, albeit discreet, is a faithful transmission, or imitation, of content. Myatt strokes a thick, creamy application of paint in way that satisfies Van Gogh's mad, if dreamy, vision of life. Forgery is perhaps pardonable precisely because, in a moment of rare vulnerability, the art asks its observer to question why they value it. The experience of a forged painting, once caught, changes the way we look at things. No longer is art at the mercy of its aesthetic, but rather it becomes a confrontation against the riddles of its own creation.

Art is more than its communal exercise of critique. Just like Myatt's career is more than scandal. When I saw that Van Gogh idling in the window, I felt the itch to discover more about it. This forgery was more than something to look at, its appearance only part of its hustle. Forgery, to me, seems like a question, a study into the influences that produce a creative object, and a call to seek deeper meaning in our work.

For a creative, knowing how to imitate purposefully can pull you closer to the spirit of creativity. It's not just a gimmick, either. Even though it feels like we live in the age of imitation. Adaptions, reboots, and remakes will continue to be fashionable long into the near future. But Myatt's strategy behind his creative labor is an invitation to reassess how our influences occupy our work. Perhaps creativity isn't some lonely piece of yourself awaiting discovery, but something contagious, inspired by someone else, like a germ. 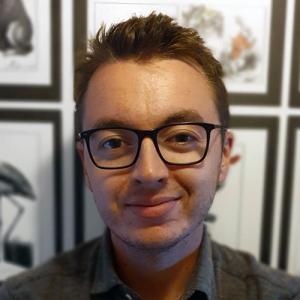