Khaby Lame for Xbox: A TikTok Influencer's Foray Into Gaming

Inside our 'Simply Next Gen' Series S campaign 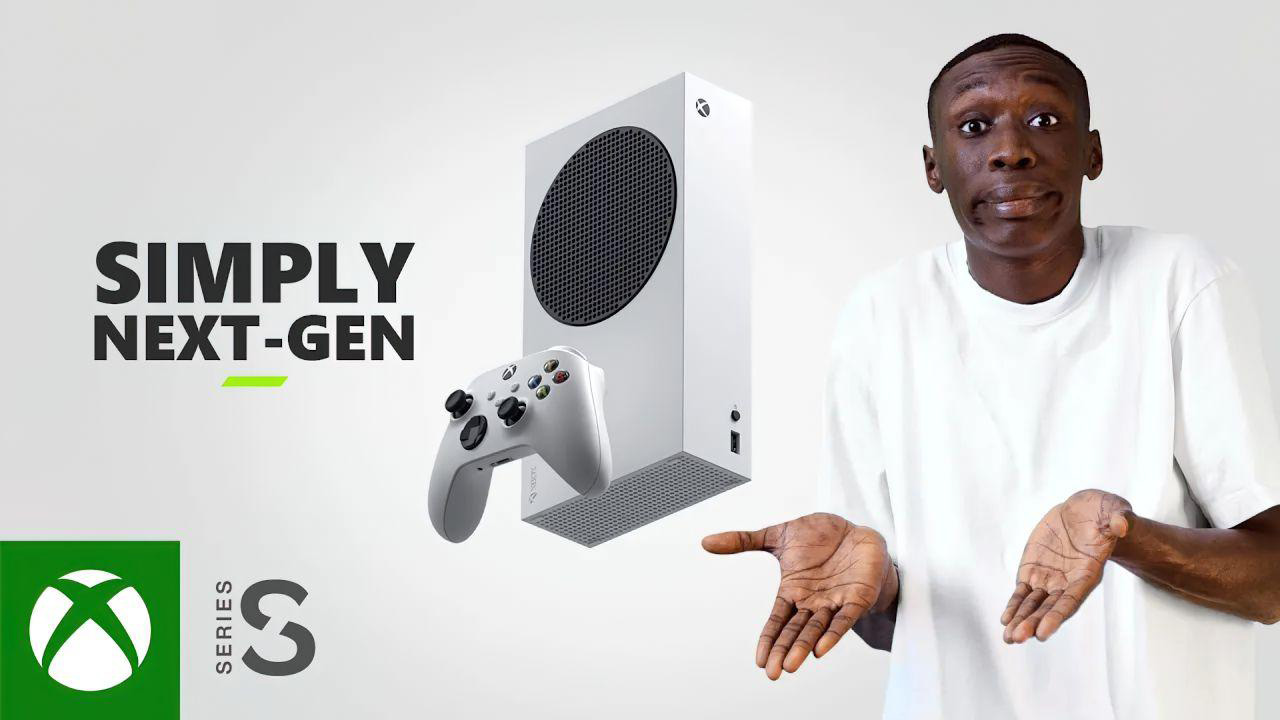 It's a great honor to be given the opportunity to launch Muse by Clio's new series "Art of the Gamer," in which agencies will break down how and why they created a recent piece of marketing.

When we thought about what to feature under the banner of "art of the gamer," our minds naturally went first to our big, exciting CG work. And our sassy social campaigns. But in the end, we decided to feature a very successful campaign … but one that might be a bit unexpected as an influencer play of sorts—Xbox's "Simply Next Gen" campaign for the Xbox Series S.

When it began, it could have been exciting CG. Based on the brief, it wanted to include video as an anchor. But what sort of video that would be, exactly, was up to us. The prime directive was to create a campaign that would move a growth audience to purchase the smaller of the Xbox series consoles—the Xbox Series S.

We thought first about what that audience is hungry for. As always, our client Josh Munsee, senior manager of Xbox global marketing, fueled us with great insights and support. We focused on landing the message that the Series S delivers all the speed, performance, connection and content of the Series X at an especially approachable cost, making the Series S the perfect match for the gaming habits of Gen Z gamers. And when these gamers aren't playing games, they are often spending hours together on TikTok—a platform as well known for its creativity as it is for its original content. This got us thinking about how we could meet this audience where they already are and give them something with which they would be authentically interested in engaging.

Khaby is one of the top two TikTok influencers in the world with over 135 million subscribers. Beloved by almost anyone who comes across him, he naturally has a special pull with Gen Z by virtue of the demographics of the platform. He is best known for making TikTok duets that distill complicated life hack videos made by others to simple, Khaby solutions. And a key to Khaby's global success is that his content contains no spoken dialogue but instead relies on his hilarious facial expressions and a signature shrug at the end, which invites us all to join him in a community of "there's a better way."

A great gift that comes with being a social-forward agency is that we are in the channels every day and get to feel the pulse of modern culture beating in almost real time. For the past couple of years, we have actually gone the next step and pulled together our daily experience across all platforms into a trend report that empowers work in every channel—social, influencer, digital and even awareness assets like key art and TV. No matter what asset we are making, we are thinking about how it fits into a fan's life. Does it reflect an understanding of what they like and care about? Is it the start of a conversation rather than a triumphant ending? Does it fit into the category of things they might share with friends? So as Khaby's star had risen, we were thinking early and often about how we might partner with this phenom, add to his brand, and carry our message to a new audience.

The real art of the gamer comes in making unexpected connections that lead to something more than the sum of their parts, and this campaign was no exception. Thinking about Khaby's focus on the easiest way to do anything, our creatives came up with a line that would connect him with the Xbox Series S: "Simply Next Gen." We could instantly picture Khaby's charming little shrug asking us "What more needs to be said? If you are after next-generation gaming with your friends, the answer is obvious." Especially when it is brought to you by a content creator you know and love.

Any great partnership is built on a mutually shared vision and benefit, so our next step was to connect with Khaby and his manager, Alessandro Riggio, to explore their perspective on Xbox and see if we could get them as excited as we were about "Simply Next Gen." We shared a creative brief (as we almost always do with content creators) that conveyed that we followed him and understood his brand as fans. And at the same time, we strived to paint a picture of the types of things we thought Khaby might be able to do with Xbox Series S that weren't so proscriptive that Khaby might not bring his own magic—which of course is always what the fans are looking for.

Lastly, now that our vision for the campaign was beginning to crystallize in our minds, we needed to negotiate for some of the aspects of our approach that are a little atypical for many content creators. We believe in the power of our influencer partners' native channels, and our chief goal was to empower Khaby to make his own super cool "Simply Next Gen" video. But we also wanted to create a set of more traditional paid social content—and certainly owned channel assets—that featured Khaby as the talent. These videos would be used as more hardworking drivers to purchase. And with The Game Awards—one of gaming's largest events celebrating game creators—fast approaching, we wanted to make some static digital and OOH assets featuring Khaby as well. Riggio and Khaby proved to be shrewd negotiators as well as thoughtful partners. And before long, we had a great partnership in place and commenced making assets because time was of the essence.

Khaby, though Senegalese, is based in Milan, Italy, so Covid and costs presented challenges to traveling for a shoot. But frankly, Alessandro held the line that Khaby's brand is really rooted in accessible content that feels like the fans could make it themselves, and traveling a bunch of ad people to the set never helps with achieving that. And on our side, by the back end of Covid we had directed far more complicated shoots remotely via online tools. So we shipped some Series S consoles to Italy and set up a pipeline to be able to look at Khaby's video in almost real time as he produced it. As always with the pros, we had very little notes on what he does instinctively so well. And Xbox also showed their typical willingness to give gamers room to play through empowering and encouraging the creativity of their partners.

Meanwhile, we had Khaby's team ship their source capture back to our creative editorial pipeline. We had already begun on a visual identity system inspired by the themes of simplicity, Xbox Series S branding and Khaby branding.

This ultimately became a set of outdoor digital billboards in downtown L.A. (LA LIVE) as well as being used across Xbox's owned and operated platforms. And we used it as connective tissue for a bespoke set of video assets edited by us to land the "Simply Next Gen" message all over Xbox owned social channels. 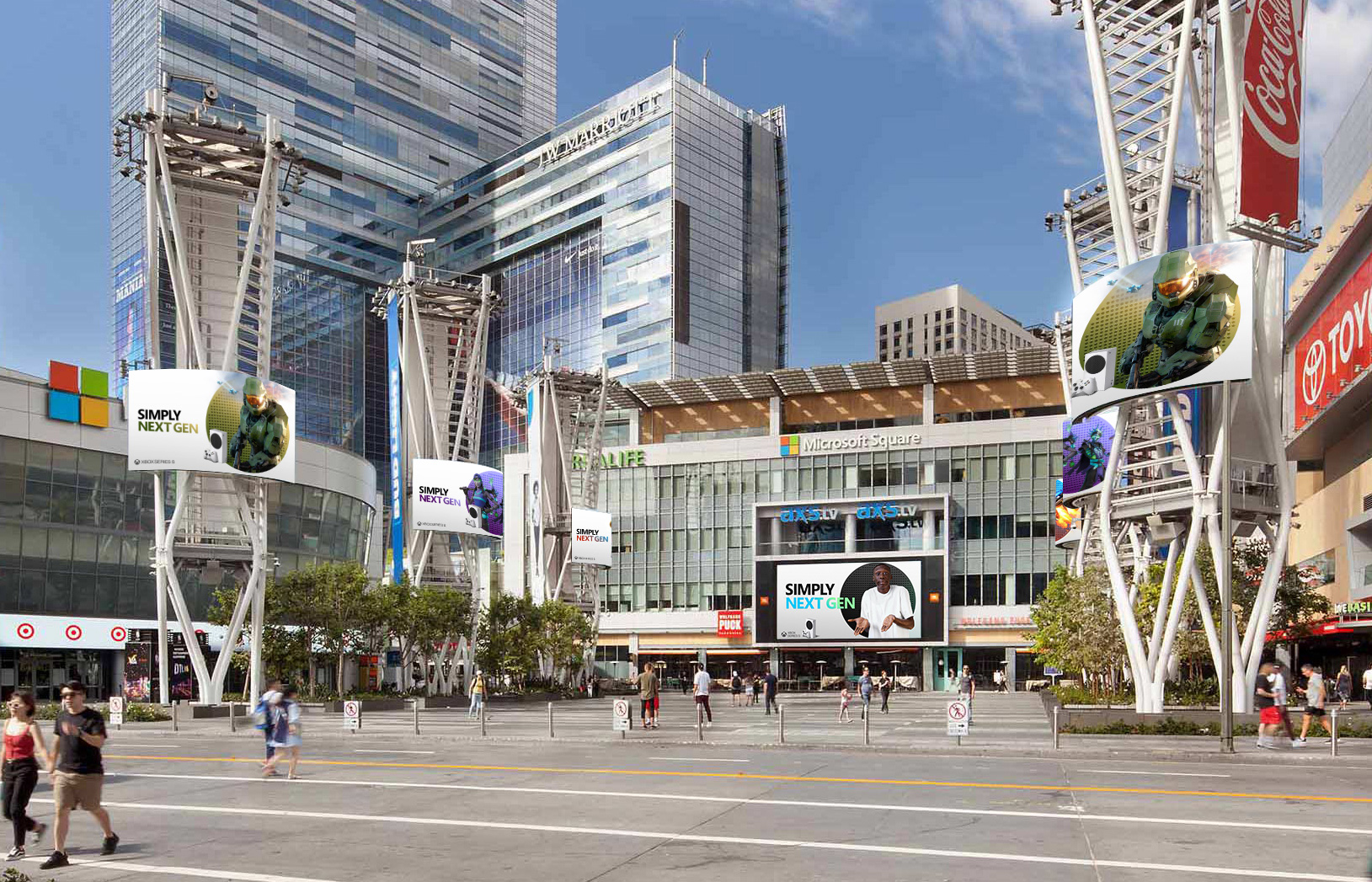 The campaign is simple, elegant and authentic. While it doesn't have the epic quality of many of our hard-surface, rendered hardware campaigns, it taps into another aspect of the target Gen Z audience—an affinity for DIY and transparency about who you are. A great place to start in making marketing assets for video games that are thinking about the fans first. And amplifying the creative instincts, tastes and art of the gamer in our executions is always our goal.