TL;DR — The albums are long gone, but the memories of them are strong.

My relationship with vinyl, like many things over the years, has stretched the extremes—from accumulation to absence. My records have suffered different fates. They have been donated, damaged,* and devoted, and also loaned, lost, and left—and last and least, sold for things that had greater hold. The disks have been forsaken, but the memories associated with them haven't faded. This choice of 10, which has felt less like a listicle and more like a Proustian life experience, consists of some that have meant something to me and some that have taken on more meaning.

*Some of my most cherished vinyl, including the entire discography of the Stone Roses—bootlegs, limited editions, and of course, all the editions with John Squire's artwork inserts—was lost to damp in a storage locker. 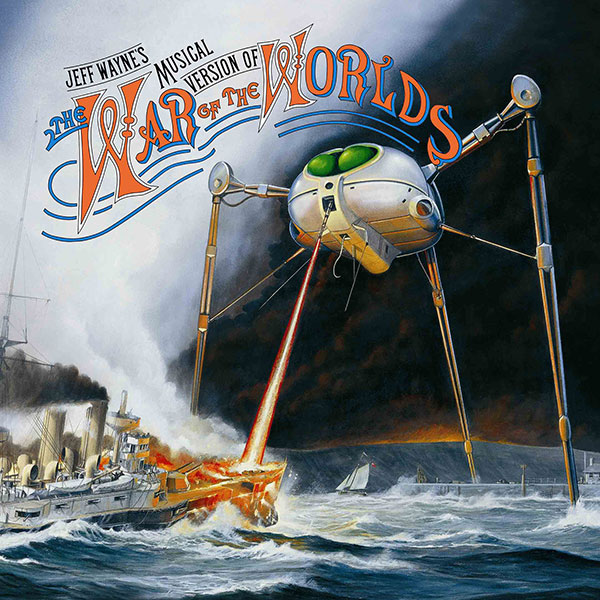 This sleeve, among the "Barrys"—Barry White, Barry Manilow, and Barry Gibb—that comprised my parents' record collection, caught my eye as child. Maybe it wasn't my first record, but it was the first that left a strong impression, a gateway to a broader and more grown-up interest in music. Although rock opera didn't become a lifelong genre, I am still to this day captivated by this concept album. It blends Button's baritone, Wells' writing, and swishing synths and strings … hard to describe what that sounds like, but to me it sounds like childhood. 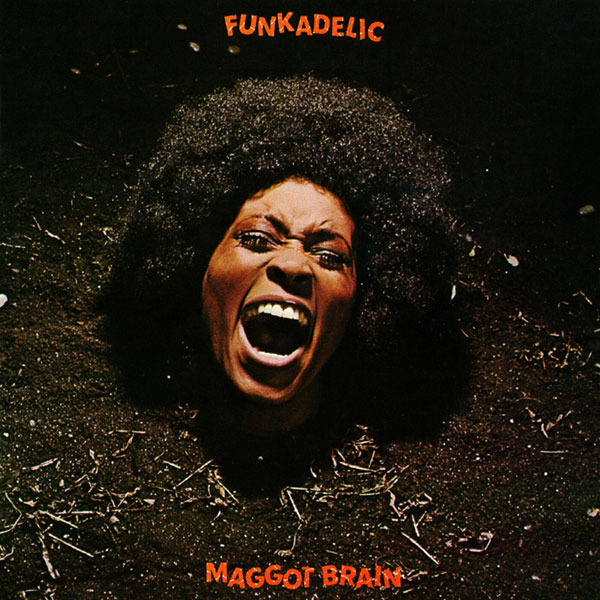 In the early '90s, me and a few mates ran a club night in South London. The event, mostly attended by students, was a thrown-together experience on a Thursday night. It was based across a series of venues—different in many ways, but similar in that they all had a hint of menace and were united by an inexplicably dark projection show featuring artists like Francis Bacon, Chris Burden and Hermann Nitsch. The evening played out in three genres: ambient, funk/soul, and hard house. I was the least capable DJ and was responsible for ambient—at a time of the night when people were coming in and coming up. The song "Maggot Brain" was always the finale of my set, and a segue to the funk/soul, which started a slow shift to the dance floor. 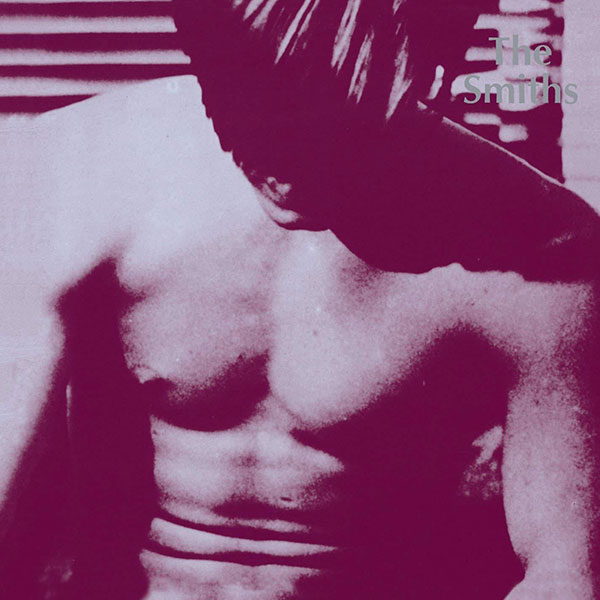 The Smiths' album covers: lazy or legendary? Pointed artistry or acts of pointless trolling? Like the band, and their lead singer, they divide opinion. Personally, I love them—they act as vinyl vignettes, riddles, Easter eggs, and a form of initiation … they almost say, "If you don't like this, you probably won't like what's inside." The sleeves challenge you to make an effort. On one hand, the cover from their eponymous release is just a picture of a bare-chested bloke, right? On the other, that bloke is Joe Dallesandro, and that's a still from the movie Flesh, produced by Andy Warhol, who designed the album for the Rolling Stones' Sticky Fingers, which features the crotch of Dallesandro. Does that mean anything, something, or simply nothing? ¯\_(ツ)_/¯ 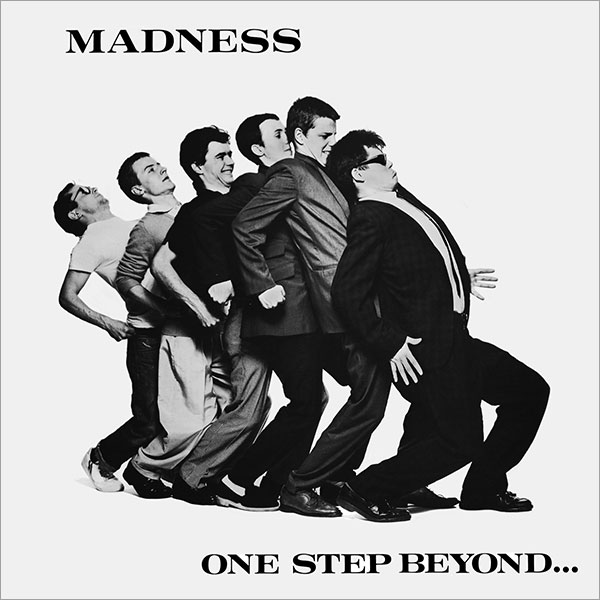 My dad's Jeff Wayne concept album was the beginning of my melodic memetic desire. He liked it, so I liked it. What was revealed to me was not just the musical world of Martians and intergalactic conflict but the world of music. However, it was the world of my dad's music. That changed when I heard airtime from Madness, Bad Manners and the Specials. These were the two-tone bands that formed the schism that started a split from piggybacking my dad's tastes and the beginning of my own … and also the start of me and my friends endlessly reenacting the iconic duckwalk ensemble on the cover of One Step Beyond. 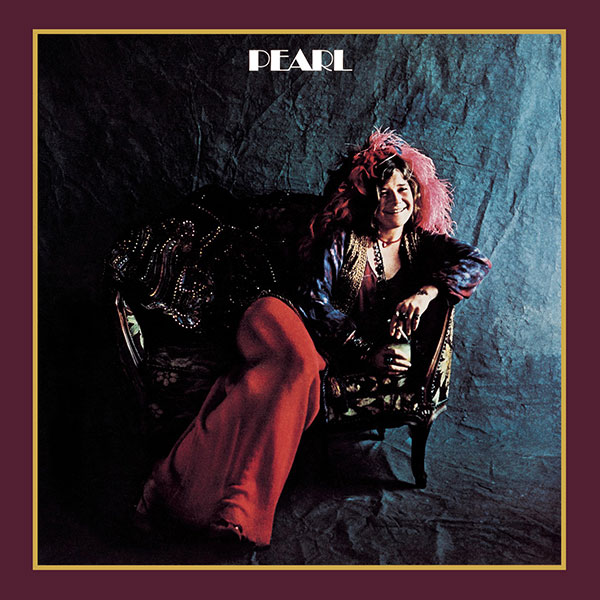 It's Sunday at 11 a.m. Saturday night was big. Late. Real late. You feel surprisingly fresh. Full of optimism. Eager, almost excited. Music. Yes, you need music. But what to play? It's been a while, you think, since I heard Janis. Yes. Pearl. It's perfect. Real this mood music. You crank the volume and the opening beats of "Move Over" begin: "You say that it's over, baby," that distinctive rich voice is coming at you strong … you nod along to the music and make your way over to the fridge, looking for that chilled water jug. Beside it is that bottle of champagne. It was a gift. Special stuff. You are saving it for the right occasion. Hang on … why are you waiting? Why not just drink it now? *Pop* You stand with the bottle soaking up the second track, "Cry Baby," put the bottle to your lips, and take a big long swig. Bottle in hand, you make your way back to the bedroom. It's going to be a great day. 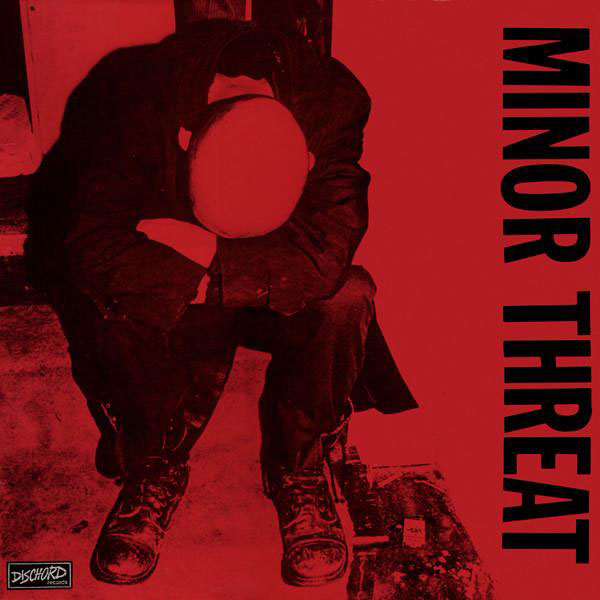 Eight tracks in a little over nine minutes.† This is a great EP to listen on loop. Like a form of hypnosis, often borderline psychosis. It's hardcore for all seasons and situations. The cover is as muscular as the music. MacKaye's brother looks like a skinhead version of Rodin's Thinker. His emotions are hard to decipher. A human Rorschach—is he lost in a moment of rejection, revelry or revelation? Both music and cover are raw and pure beauty.

† This runtime is almost the same length as one play of "Free Bird," which, TBH, is one play too many. 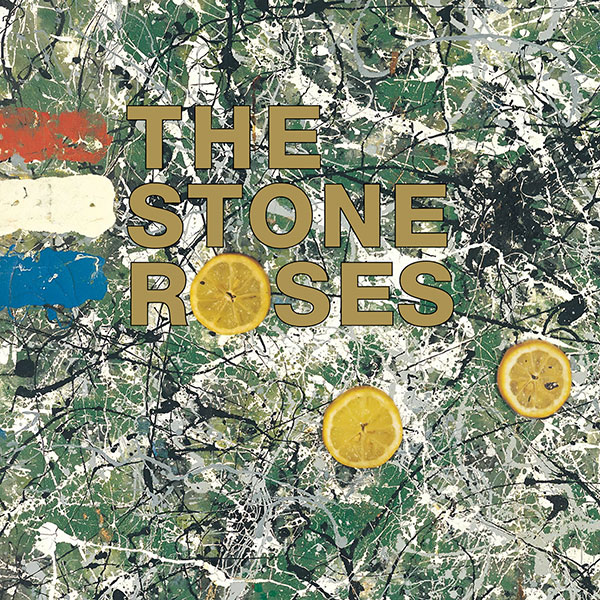 The Smiths entry is probably where I should have told you that I once met Morrissey, and it definitely could be chalked up in the "Never meet your idols" column. Well, I also had the same experience with John Squire, the Stone Roses' guitarist. On reflection this says more about me than the artists I admire. John and Stephen—it's not you, it's me. The debut album of the Stone Roses isn't just one of the best albums of the era, but one of the best of all time, and one that nearly, and probably should have, remained the band's only LP. The cover is also a work of art. It nods to Jackson Pollack, Giant's Causeway, and May '68. Of all these influences, Pollack led to a spiral of interest—and a lifelong unpremeditated pursuit—to see "Jackson Pollock, Number 9," which was inspired by hearing a lyric in one of their songs. Decades later, I found the piece in Hartford, Connecticut, only for me to later discover, upon reading the lyric, that it's actually "Jackson Pollock, Number 5", which is in a private collection. For over 20 years I had been looking for something wrong, and hidden. This wasn't the only time I had experienced heartbreak with their music. 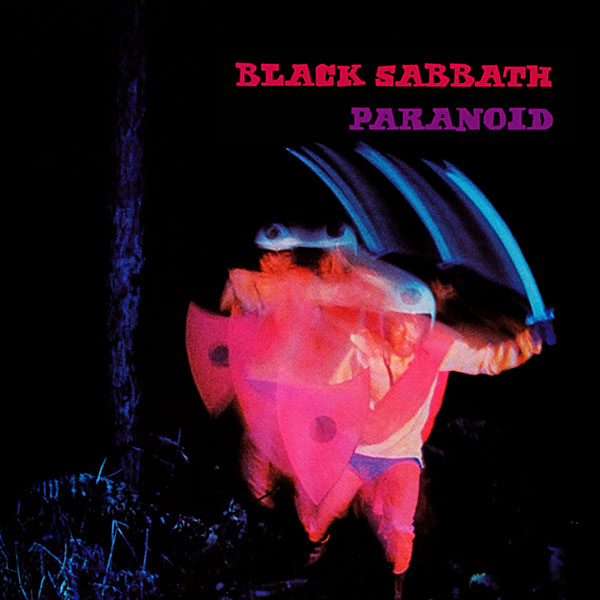 After their brilliant self-titled first release,‡ Sabbath wasted no time with a follow-up and a few months later were back in the studio working on a second album. The band wanted to release it not as Paranoid but as War Pigs, and the cover was created for that title, but the label got cold feet and forced a change due to associations with the Vietnam War (or, as Osbourne has stated, commercial alignment with release of "Paranoid," the single). They ran the original artwork anyway. That's a lesson in not losing sight of what the Big Idea is. The job to be done is changing the world with a masterpiece album, not matching your hallucinogenic, fluorescent thrift-shop, battleground cosplayer artwork with your opening track. They invented the rules,§ so they could—and did—do as they liked.

‡ Black Sabbath not only invented heavy metal music, but also the heavy metal album cover, and while Paranoid has a Spinal Tap-like quality in its execution and backstory, the debut album has all the typographic and dark thematic structures that later defined the aesthetic of the genre.

§ For a good example of the adage that artists create culture and advertising appropriates culture, see Nike's skateboarding demo tour hijacking of the album cover. 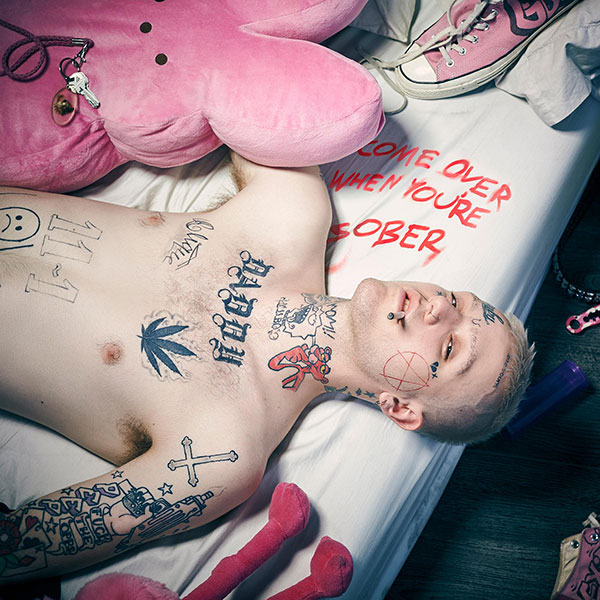 I was late to the Peep party, but when I finally arrived, I overstayed my welcome until I was finally evicted from the host's spare room. I put this album cover in, and the music, not for the specific sleeve, but to represent the category of "ballads by broken boys." There are many diverse artists I enjoy who could have made an appearance within this category—Elliott Smith, Harry Nilsson, Lou Reed, Johnny Cash, Warren Zevon, Jeff Buckley, Father John Misty (who I spurned at the altar in putting this list together—sorry, FJM)—and could have been a list in their own right. This is a postmodern take (‖). Furthermore, he is a lesson that artists aren't cynical money-making machines—in Lil Peep we have a contemporary and poignant reminder of the commodification and exploitation of artists who are stretched, stressed and ultimately sacrificed in the name of 🤑. Yeah, but cool album cover, bro.

‖ Postmodern in that it is seemingly self-referential in its depiction of the tortured artist trope. A line can be drawn from Joplin sprawled on a loveseat, cocktail in hand, to Lil Peep spread on a bed with a blunt; one iconic, one ironic—it is signaling at the same time as it is destroying.

Dead Kennedys
Give Me Convenience or Give Me Death (1987) 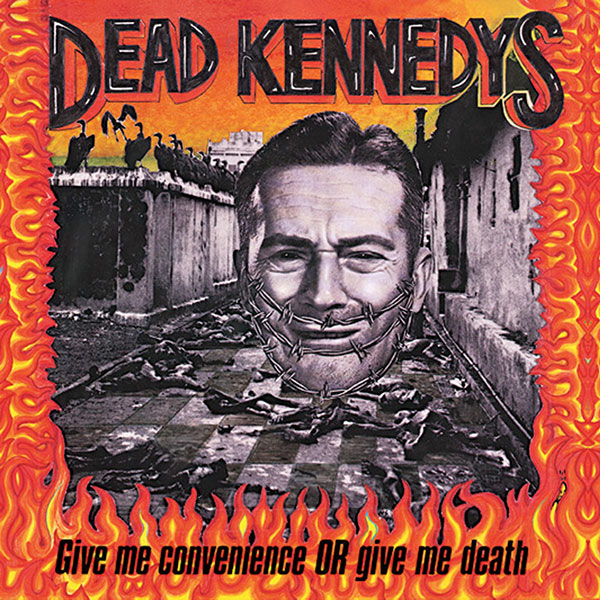 There are three reasons why I selected this as my final entry:

The pandemic really turned my music listening upside down. Pre Covid-19, I would listen to screamo/doom metal during a morning gym session, or hardcore while on a run, or maybe West Coast and '70s punk just because. Then my state of mind shifted to a point that anything harder than Jefferson Airplane would be intolerable. I'd listen to "All Things Must Pass" on loop and lose myself in indie folk bands. Then recently, out of nowhere, I awoke one morning with a nagging urge to listen to the Dead Kennedys … like the time I ended my vegetarianism with a savage devouring of a barely cooked steak in the dark. Right now, Biafra's ranting and ravings feel right.

Is there a better album title that captures the political culture wars around mask wearing and the ongoing debate that the pandemic seems to have spawned—profit first or people first?

I want to end on one of my fondest musical memories. One that isn't even associated with listening to music. When we were teenagers, my brother and I used to go to a record/comic/zine shop. It was dark, smelt of patchouli oil, and was staffed by a couple longhaired raspy-voiced irascible characters. The centerpieces of the shop would be sealed first pressings of albums with iconic cover art by masters of the genre like Raymond Pettibon, Peter Saville and Winston Smith, the latter associated with Dead Kennedys sleeves. These album covers, preserved, and archivally arranged, were not just elevated in the shop, but elevated in my impressionable mind. They were the most coveted items in the world. My desire to own them indescribable, and like anything we truly love, hard to fully articulate why…

Art of the Album is our weekly feature every Thursday about the craft of album-cover design. If you'd like to write for the series, or learn more about our Clio Music program, please get in touch. 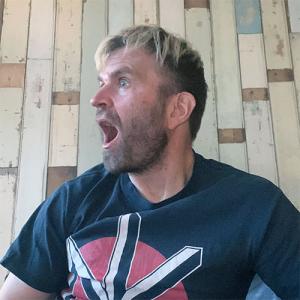