I have to confess that the first thing I do before visiting a new town is look up and write down all the record stores, flea markets and even charity stores. I love to get my hands dirty searching for old records and rarities. Many of these stores are hidden off the beaten track, so it's a good way to get to know a new city as well.

Today, I would like to highlight one of my favorite styles: psychedelic music (from the '60s to today). I hope you enjoy it, and remember: Not all mind-expanding substances are illegal. 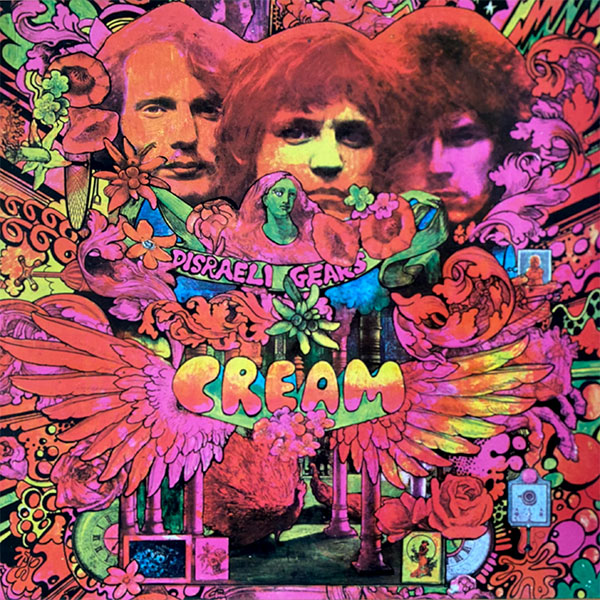 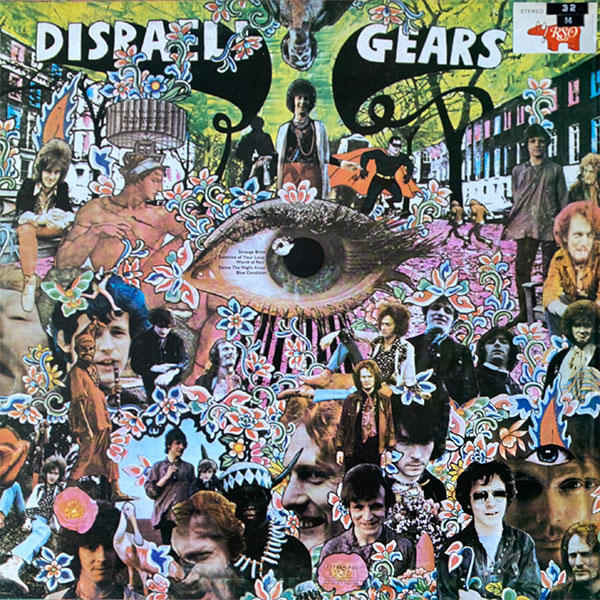 I came across this record in a flea market, and I bought it without a second thought. It was an eye-opener that introduced me into a new world full of colors, as psychedelic music is. I love this band, this album and its cover so much that I printed it on a T-shirt that I wore until the fabric disappeared. Researching the artist behind the cover, I've found a remarkable anecdote about the beginning of their relationship. Let me take you back to London in 1967, when the artist and the musician met each other. When I read the story, I pictured them sharing a "teapot" sitting on the stairs in the entrance to the building where both lived. Martin Sharp, a young Australian artist, reads to Eric Clapton, Cream's young guitarist, the last poem he's written. Clapton listens closely to the verses, and he can't help but start putting them into the new song he's been composing (this kind of thing happens when people are sharing a "teapot"). The cosmos was aligned, the music and the lyrics suited perfectly to create a great song called "Tales of Brave Ulysses." It became the B side of the new single that would launch Disraeli Gears, their second album. Today, Martin Sharp is the artist known for creating the cover art of two Cream albums and co-writing one of their best-known songs. I highly recommend looking into his work during the "swinging '60s" in London. He was a great contributor and co-founded U.K. magazine London OZ (1967-73). 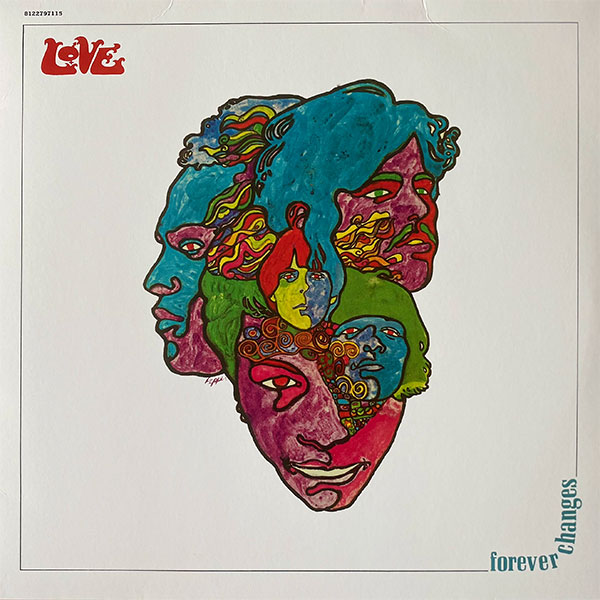 How many times have we worked for a brand we didn't like? To Bob Pepper, Love was that sort of band. He didn't like their music at all. From the mid-'60s to the early '70s, Pepper created sleeve art for 50-odd RCA and Elektra Records releases, and sometimes he had to do it for bands that he didn't like. But he (as we are) was a professional and created a beautiful drawing for a beautiful album. Probably his most enduring work. But he always talked about it for other reasons. When the album came out, he quickly realized Bill Harvey (art director) had changed his design. He'd had the lips on the main character closed, and then Bill had drawn a smile in there. And it didn't fit the sides of the lips. Obviously, Bob didn't like that at all. I hope our next work for a brand that we don't like will end up like this iconic cover (changes included). Love was formed in Los Angeles. Led by Arthur Lee, it was one of the first racially diverse American rock bands. Forever Changes was their third studio album. 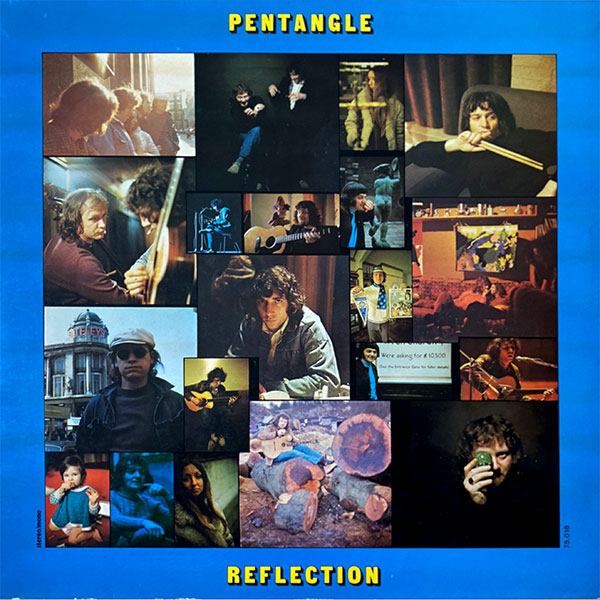 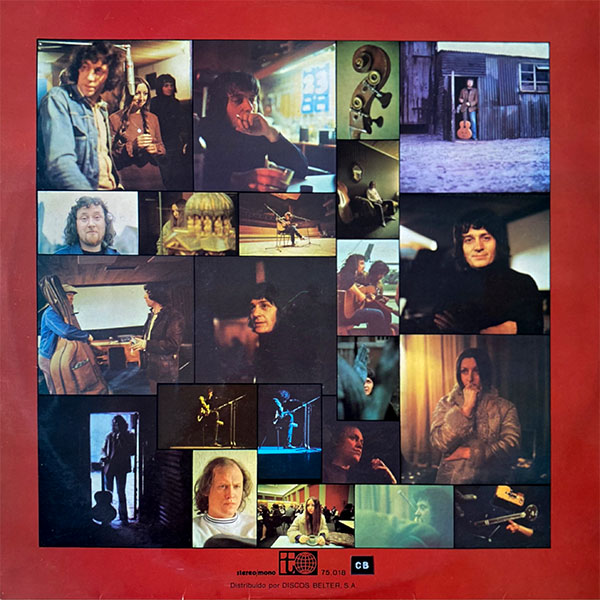 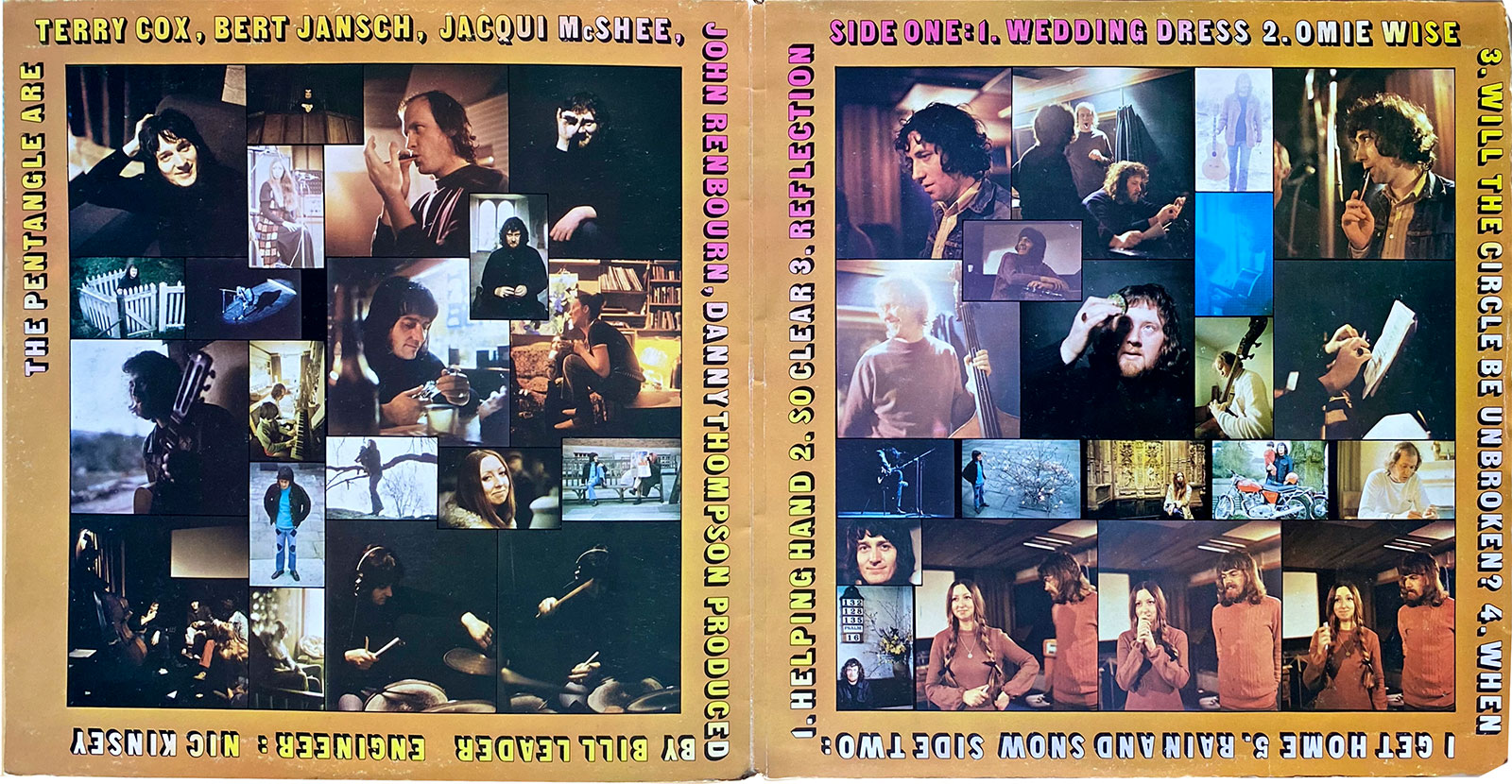 Reflection by Pentangle is an ideal album for spending a Sunday doing nothing important, just letting your thoughts run free and recharging your batteries for the coming week. The designer behind this artwork was Shepard Sherbell, an American visual artist and photographer. When the band was recording at Command Studios and Olympic Studios in London, Sherbell was there with his camera, taking pictures that finally turned into the sleeve design. If they'd had an Instagram profile, this cover would have been the closest thing. Like an Instagram feed, the cover shows the friendly faces of the group during those days. But the tensions between them were high. Alcohol, drugs, band members missing for days, or trying to throw it all away. But don't you worry, the album didn't record those tensions, so set up your Sunday to do nothing important, and don't forget to create a post about it. 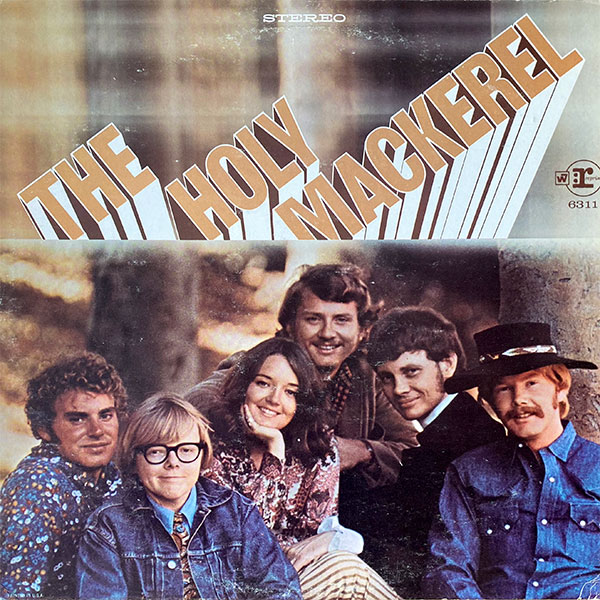 This album is a great unknown—another piece of psychedelic pop and folk that people didn't appreciate in its time. The album failed to chart nationally. Ed Thrasher was an art director who created hundreds of projects, like Jimi Hendrix's Are You Experienced? It has been a great surprise to find out about him. I am seriously thinking of buying some record to frame it. You can check out all his work in Discogs and then maybe will think, as I do, that he deserves a Pinterest page about him. There are many inspiring things. Back to this cover, I would like to know if Thrasher's first proposal was just the typography game over the blurred background without a photo, but Reprise Records forced him to add a group portrait into it. But it doesn't matter, because everything on it is: Holy mackerel! 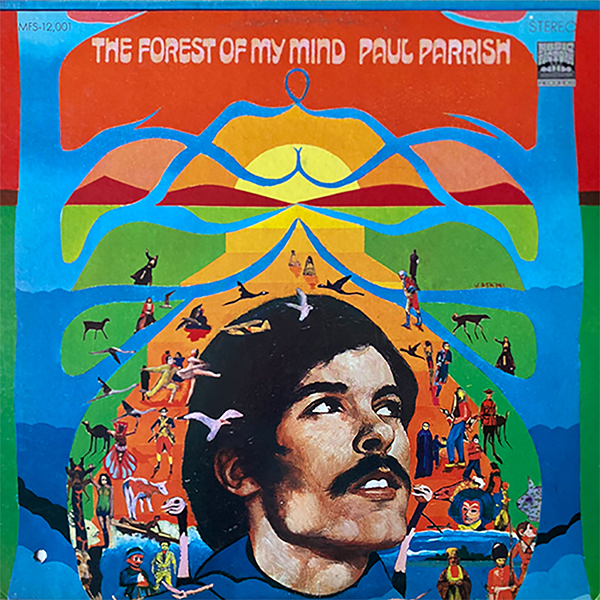 Superb psychedelic pop from his only LP release in 1968. Another album that I'd instantly picked out of the stacks based on the cover alone. The artist was Victor Atkins. His work explores the potentials of color and line gestures, and this sleeve art is a great example of that. During his career, he hadn't designed many covers. Miles Davis' Miles in the Sky sleeve could be one to highlight. However, I still love Paul Parrish's one. 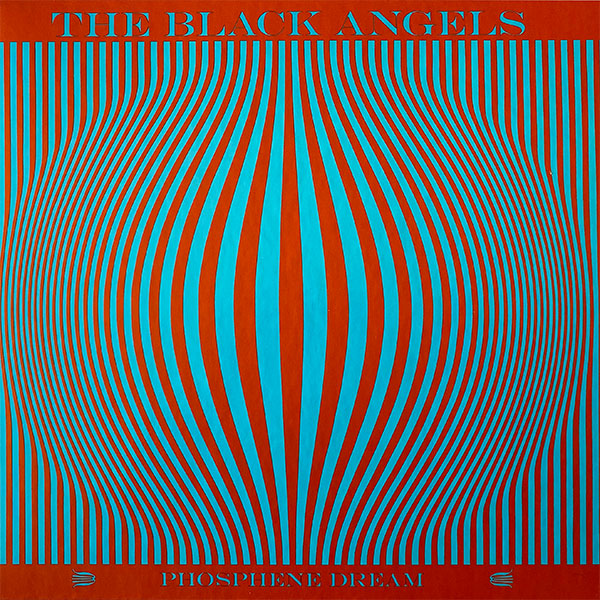 One of my favorite neo-psychedelic bands. I've been to every concert they have played in Madrid. The Black Angels, formed in Austin, are among the few bands who've kept the poster spirit alive, drawing a direct line to the psychedelic '60s. In this album, Bridget Riley and Julian Stanczak's op-art influence was created by Christian Bland, the band's lead guitarist. As far as I know, he studied graphic design and advertising. Maybe the ad industry lost an award-winning art director, but we've gained a great artist, not only because of his music but also because of his cover designs. P.S.: You can see the phosphene dream if you listen to this song. 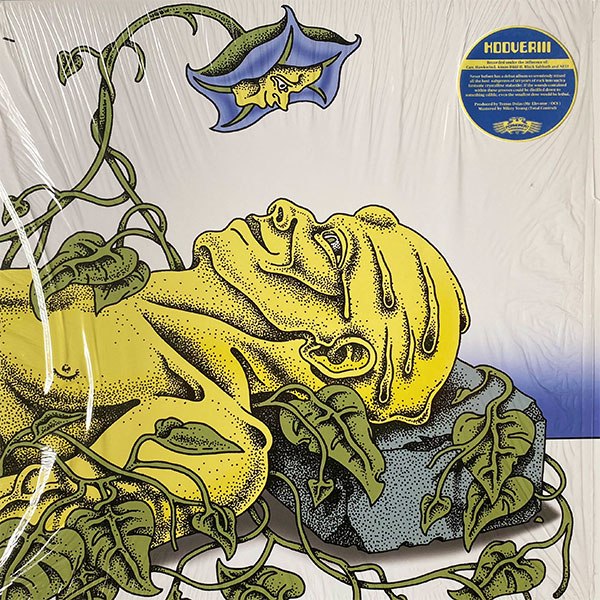 With only two albums, HooverIII is the band with a good perspective in their horizons. I've listened to it several times because I like this band so much, but I can't figure out a connection between the cover and the music inside it. I'm tempted to ask Jesse Fillingham, Los Angeles-based illustrator, for an answer, but he might think what a freak I am. So, I've preferred to solve it by myself. I want to think it tries to talk about the relationship between man and nature. It's a magical way to say there's no planet B. His work is fascinating. Juxtapoz Magazine called him a New Age fabulist, and it's a great way to name him. 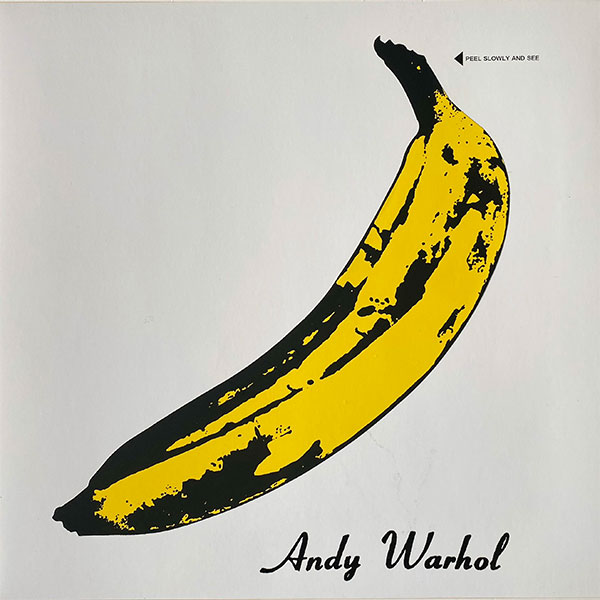 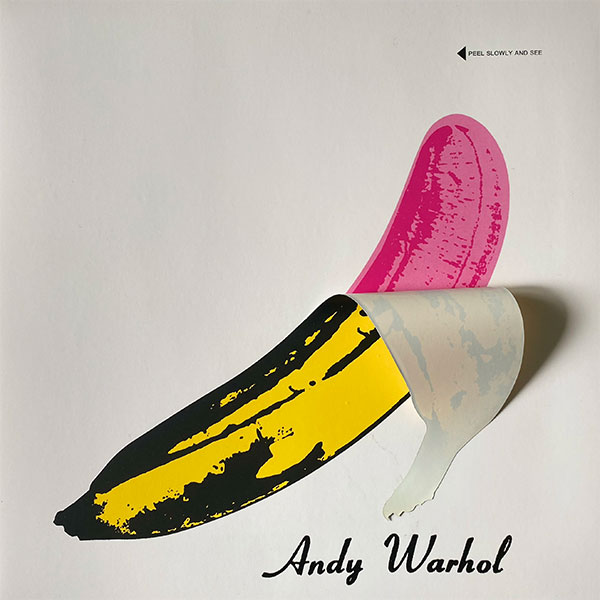 I've always thought The Velvet Underground were far ahead of their time. They were an avant-garde group, and Warhol knew it. He produced their first album; then he created the Exploding Plastic Inevitable show to introduce The Velvet Underground & Nico. And obviously, he also designed the cover (there's a pink banana underneath if you peel it). In 1967, Andy had created another piece of pop art. Thanks to this record, I discovered a new sound, darker than the '60s styles that I had listened to before, and I even figured out the difference between the East Coast and West Coast scenes. NYC and SF. Whips and Flower Power. 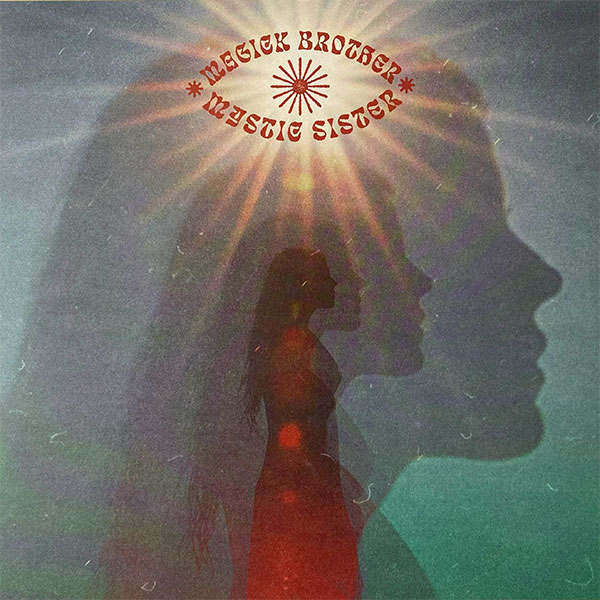 This is an advertising site, so it's hard to pass up an opportunity to sell something. I want to finished up with the last record edited by The John Colby Sect label. Magick Brother & Mystic Sister takes us into a non-gravity place near Tibidabo (Barcelona magic mountain), where jazz, funk, folk and psychedelic sounds live in perfect harmony. The artist behind the cover is Penabranca, a Brazilian visual artist based in Brooklyn. The cover seems to come from the past to move us into a future that sounds like a great place to disconnect from it all. Magick Brother & Mystic Sister is a band to look out for and to welcome into your collection now.

Art of the Album is a regular feature on Thursdays looking at the craft of album-cover design. If you'd like to write for the series, or learn more about our Clio Music program, please get in touch. 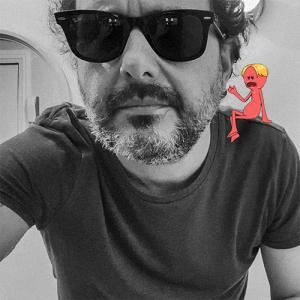 Dani Saenz
Dani Saenz is creative director at Leo Burnett Spain. Born in Madrid, he went to college only to realize the best way to be a "great creative" is by working and working. So, he left college to become a hard worker. With over 15 years of experience, he has been awarded in all major festivals worldwide, and still thinks advertising is not dead; it just looks different.
More from Dani Saenz