From the time I was old enough to go through my parents' record collection, there's always been something special about holding an album in my hands and studying the cover. Back then it was all about the wonder of "Who is this?" and the anticipation of "What does this sound like?" With that in mind, it should come as no surprise that one of my favorite hobbies as an adult is digging through crates of used CDs and vinyl in hopes of finding something amazing.

Of course, much like a book, we shouldn't judge an album by its cover. But truly effective album art can make us pause and say "What is this???"—in either the best, or worst, possible way.

For the purposes of this column, I'm putting the most legendary album covers to the side. I think plenty of people have waxed poetically about Abbey Road and Nevermind, and quite frankly we really don't need to give the kid on the cover the latter another reason to try to sue the surviving members of Nirvana.

Instead, my list has everything from '70s rock to '90s hip-hop, with some Danish R&B, Muppet disco and blinged-out bears thrown in for good measure.

Let's get into it! 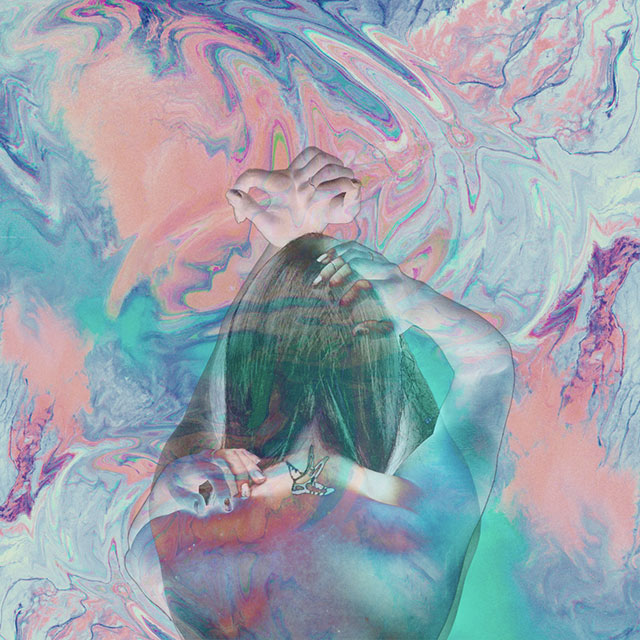 When Fjer released her fantastic electro soul-pop album You Again with a limited-edition vinyl pressing featuring gorgeous cover art by her fellow Copenhagen native Morten Overgaard, it was a "shut up and take my money" situation.

Fjer met Overgaard through Instagram, and says the initial photo shoot for the cover involved both a digital and traditional camera. "He played around with a lot of the photos he had taken of me," she remembers, "and different double exposure things from various photos he had taken before, and the whole rainbow color scheme."

Another important element in the creation of the cover art was holographic oil. The inspiration for this stemmed from, of all things, a puddle, as Fjer notes that when oil is in a puddle of water "the oil kind of spreads, and makes this rainbow color palette that's holographic almost, and I really wanted that in."

The finished piece is amazing, and a perfect representation of Fjer's angelic vocals, as well as the entire vibe of the album, which is one of the reasons why this cover art stays on display in my home (FYI, it's on display in her home, as well!).

Fjer, which is Danish for "feather," now goes by the name maia maia, and recently signed with Sony Music Denmark to begin work on a pop album. 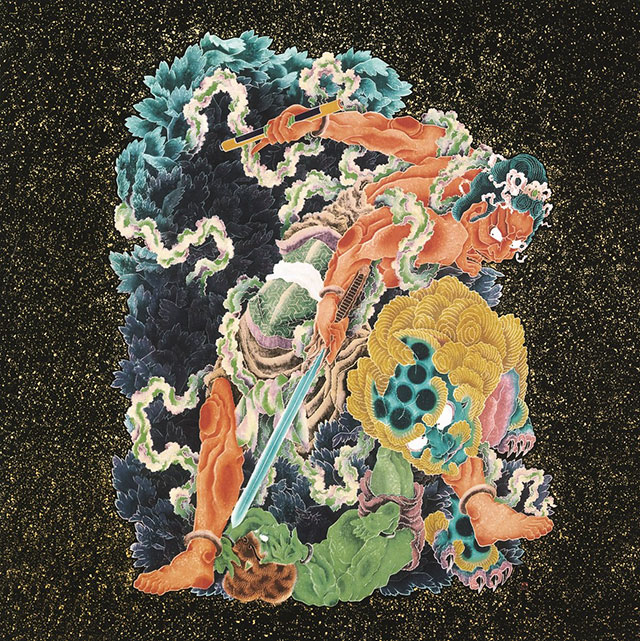 DJ Krush's The Message at the Depth actually has two album covers, as the CD version and vinyl version have different samurai imagery done by artist Igohei Kido, with the vinyl version (as seen above) having an additional credit to Jun Sawada.

At one point I thought the vinyl version might be an interpretation of Vajrapani, the Buddhist deity that's worshipped at the Shaolin Temple, and is viewed as the protector of Buddha (I'd love to get confirmation or clarification if either artist is reading this). Regardless of whether or not it's Vajrapani, it's an incredibly badass image that's been on display in my home for 20 years.

Bonus: The album features "Aletheuo (Truthspeaking)," which is an amazing trip-hop gem. 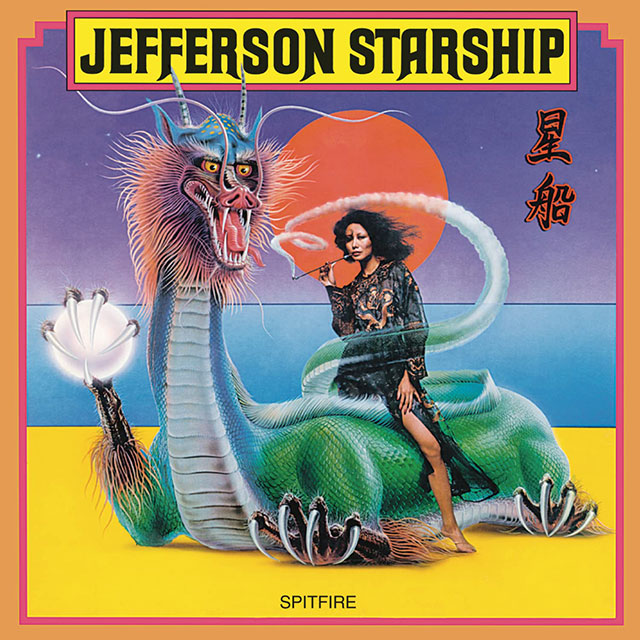 In a crazy series of events, late last summer I saw the revamped lineup of Jefferson Starship at an outdoor show in Stamford, Connecticut, and two weeks later I found this album, along with two other Jefferson Starship/Jefferson Airplane albums, while going through used vinyl at one of my favorite local spots. I was immediately drawn to the image, created by Japanese illustrator Shusei Nagaoka, which I'd previously seen on a T-shirt at the show. I mean, just look at it! It's too cool for words! 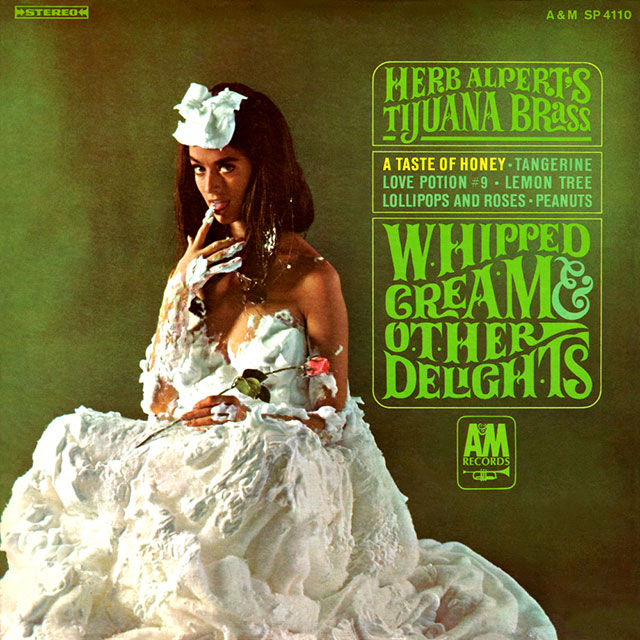 If you were to look at album sales numbers from 1966, you might think that we, as a nation, were really into mariachi-inspired instrumentals, as Herb Alpert's Tijuana Brass' Whipped Cream & Other Delights, despite being released in the spring of '65, was the No. 1 album of the year. It wasn't exactly a slow year for music, either, as Alpert's effort bested releases by the Beatles, the Rolling Stones and Frank Sinatra.

Something tells me the image of model Dolores Erickson covered in "whipped cream" (which was really shaving cream, with the exception of what was on her head and index finger) may have had something to do with the album's popularity. The legendary cover was created, and shot, by A&M's art director Peter Whorf, and believe it or not, Erickson is actually three months pregnant under all that shaving cream! 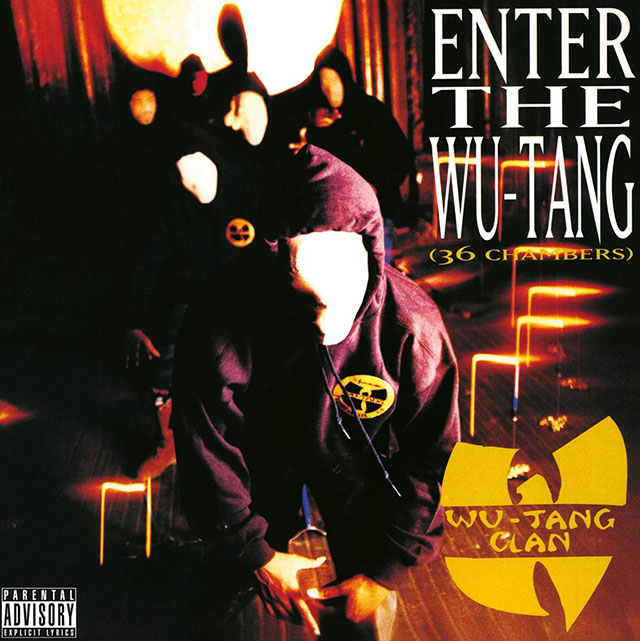 I remember being a young hip-hop fan in my teens flipping through new releases at a local record store when this image suddenly appeared before me. It was an immediate "What is this???" moment, and it's one that happened because photographer Danny Hastings came up with a brilliant idea on the fly.

Apparently two members of Wu-Tang neglected to show up for the album cover photo shoot, and RZA was ready to cancel, but Hastings remembered seeing Wu-Tang bum-rush a stage wearing hoodies and masks at a showcase in Atlanta, and he pitched recreating some of that imagery for the album cover. RZA liked the idea, and the rest is hip-hop history. 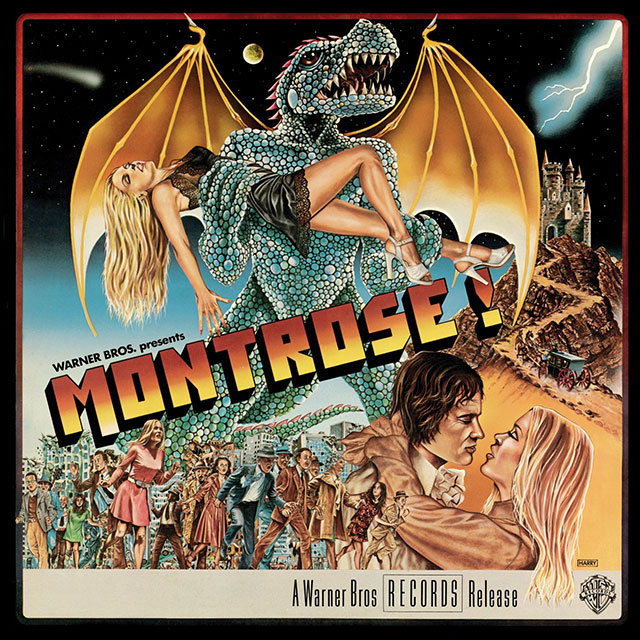 I was digging through albums at a record fair when this wonderfully bonkers album cover stopped me in my tracks. The eye-catching artwork was created by Harry Rossit, who was known for his work creating concert poster art in the '60s and '70s, including frequently working with Bill Graham. The album, however, is noteworthy for another reason—it was Montrose's first without their former lead singer, a guy by the name of Sammy Hagar.

When I paid for the album, the guy at the table wanted to let me know it's a great record, but honestly, it could've been a record of random animal noises and I'd have still wanted it for the cover. 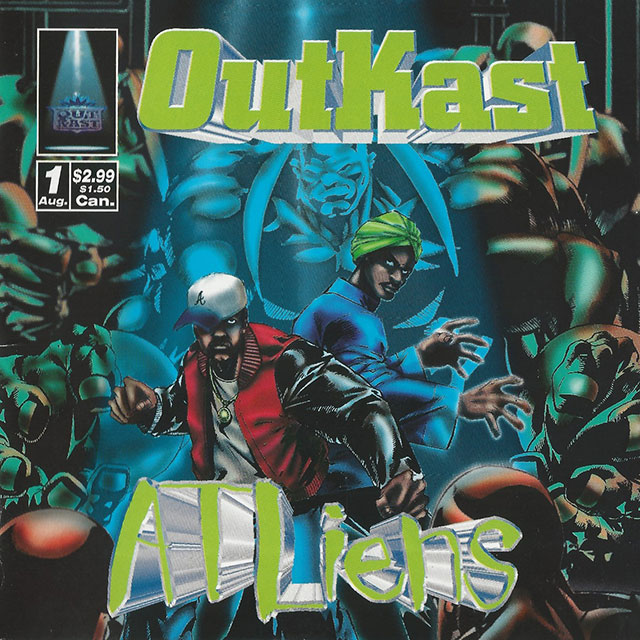 Frank Gomez, who was working at DC Comics at the time, would end up wielding his magical pen to create the ATLiens cover art, with LaFace Records' Vince Robinson topping it off by suggesting, and sketching, the Atlanta Braves cap on Big Boi's head. The entire thing is, to borrow a line from Big Boi, "cooler than a polar bear's toenails." 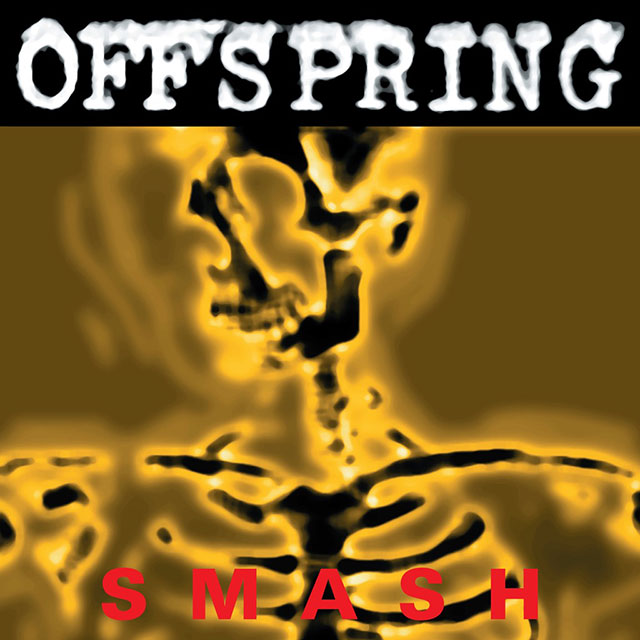 What I love about the cover of the Offspring's Smash is that the image truly captures what you're in for—a complete shock to the system. The first time someone listens to Smash, it's a "WHOA!" moment, and when the band hit radio with "Come Out and Play," they became integral in bringing about a rebirth of punk rock on a mainstream level. Clearly, many of us liked what we heard, as Smash would go on to become the best-selling independent-label album of all-time. 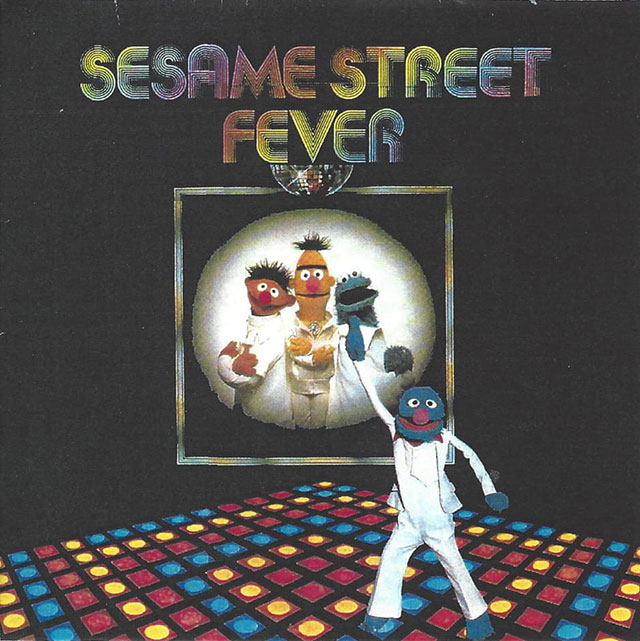 The front and back cover of this album, along with the gatefold, are a complete parody of the Saturday Night Fever soundtrack, swapping out the Bee Gees and John Travolta for Grover, Cookie Monster and other favorites from the Sesame Street gang. I'm guessing everyone was in on the joke, as the Bee Gees' own Robin Gibb was featured on multiple songs on Sesame Street Fever, which includes disco versions of "Rubber Duckie" and "C is for Cookie." I still can't believe I found this in a bin of used vinyl for just a couple bucks! 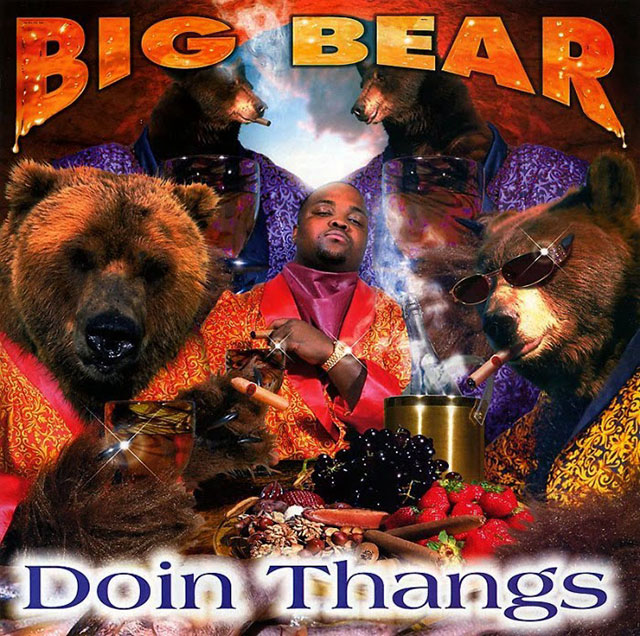 No list of great album covers is complete without a mention of Big Bear's Doin Thangs. The image was created by the legendary Houston-based graphic design firm Pen & Pixel, which became known for their work creating visually distinct album covers for No Limit Records and Cash Money Records back in the '90s. For Big Bear, I feel like someone said, "What we're looking for is a No Limit type of cover … but with bears," and Pen & Pixel replied, "Say no more!"

Hang this album cover in the Louvre! 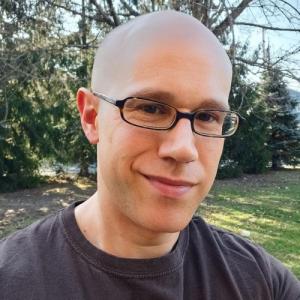 Adam Bernard
Adam Bernard is a music industry veteran who has been working in media since 2000. He's old-school enough to have written a newspaper column, been one of the original music bloggers, and penned 14 national magazine cover stories along the way. If you live in the NYC area, you've probably seen him at a show.

Always looking to discover new artists and bands, he interviewed Katy Perry before she kissed a girl, and 50 Cent before he looked to get rich or die tryin'. Also a cancer survivor and a 5th degree black belt in Kempo, Adam released a memoir, ChemBro: Embracing Beastmode to Beat Cancer, in 2020 via Dreaming Big Publications.