When I was in sixth grade, I had a friend named Molly who had invaluable, magical knowledge. She knew how to copy and burn CDs. Every week, she would make a copy of one of her favorite albums and bring it to school for me. Obviously, I would first decorate it elaborately with Sharpies, then I would pop it into my Walkman and listen through, front to back, on the bus ride home. Simple Plan's Still Not Getting Any, Green Day's American Idiot and Good Charlotte's The Young and the Hopeless were a few of the first CDs Molly gave me, and they fundamentally shaped how my taste in music developed (despite being bullied for liking such "whiny" bands lol). Eventually I learned how to burn my own CDs, until I discovered Limewire … which I don't even need to talk about because I definitely purchased all my music very legally with money from there on out.

I love every single one of those albums I discovered as a young teen and still listen to them all the time, over 15 years later. Sadly, I don't have my Sharpie'd CDs anymore. But I do have Spotify, so after looking through my saved albums and thinking about this for a few days, I've narrowed down 10 albums—some old, some new—whose artwork (and, of course, music) had an impact on me as a creative and as a human. 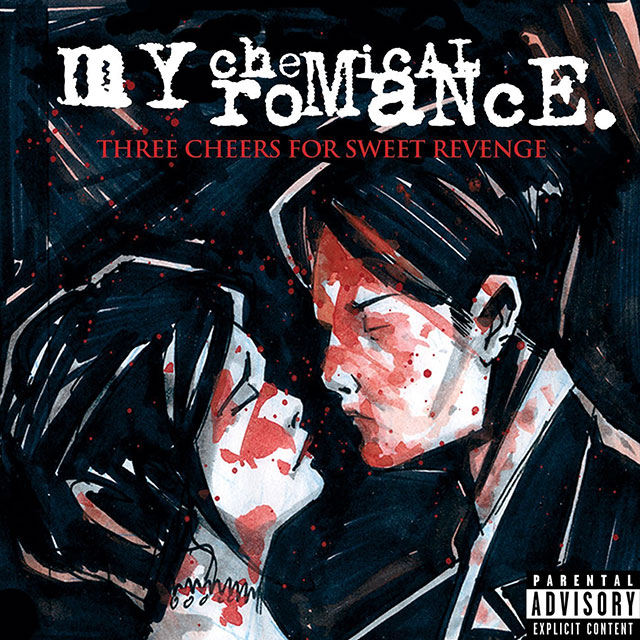 If I had to choose one album that defined my adolescence, it would be this one. Like many other fans, Revenge was my first introduction to MCR. The moment I saw Gerard Way grimacing down the camera (with an enviable smoky eye), decked out in black and red while conducting the most 2000s-esque gothic funeral in the "Helena" music video, I knew it was all over for me. The album artwork is a painting by Gerard himself titled "The Demolition Lovers" (which is also the last song on their preceding album, I Brought You My Bullets, You Brought Me Your Love) and represents a Bonnie and Clyde-type couple whose tortured love story is carried over from Bullets and continues throughout Revenge. Gerard's background in comics and storytelling, along with the band's commitment to their concepts, helped build an expansive world where the music, art, characters and themes are all connected in vivid, emotional ways. Such drama! This album was absolutely a pillar in the foundation of my own creativity. (P.S., stream "The Foundations of Decay" on Spotify. x<3x) Fav song: "Thank You for the Venom." 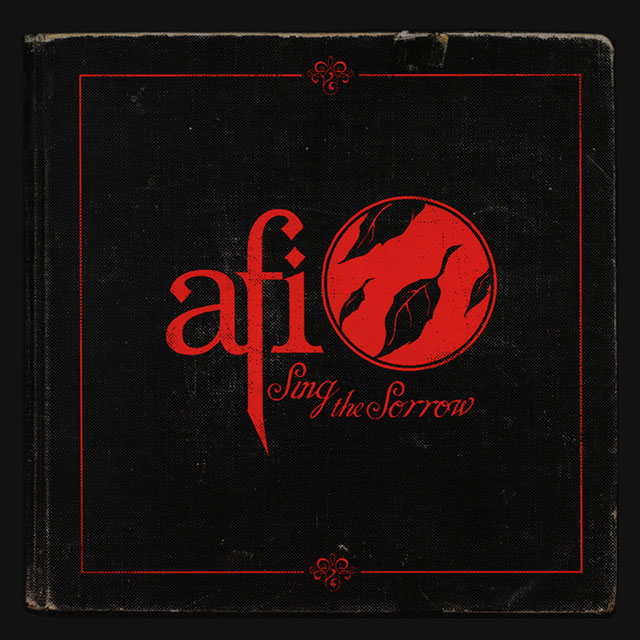 Continuing the black-and-red aesthetic (it was '04 after all) is AFI's Sing the Sorrow. I was introduced to AFI by my best friend's older sister. I thought she was the coolest girl ever because she listened to the same gothy music I liked and she was always making art in Adobe Photoshop CS2, which led me to beg my mom for the same software, and the baby designer in me was born. The overall theme of this album is death and reincarnation. The record starts with the song "Miseria Cantare - The Beginning," followed by "The Leaving Song Pt. II." Interestingly, "The Leaving Song [pt. I]" is track 11. Some fans have a theory that the record is designed to be one continuous loop and that track 3 is the "real" beginning, which would put the Leaving Songs in proper order. The album artwork featured a circular icon of falling leaves on the front (representing death and returning to the Earth) and an icon of water on the back (representing rebirth). There were several other symbols throughout the album booklet, all contained in *circles*—i.e., continuous loops. We love a concept! Fav song: "The Leaving Song." 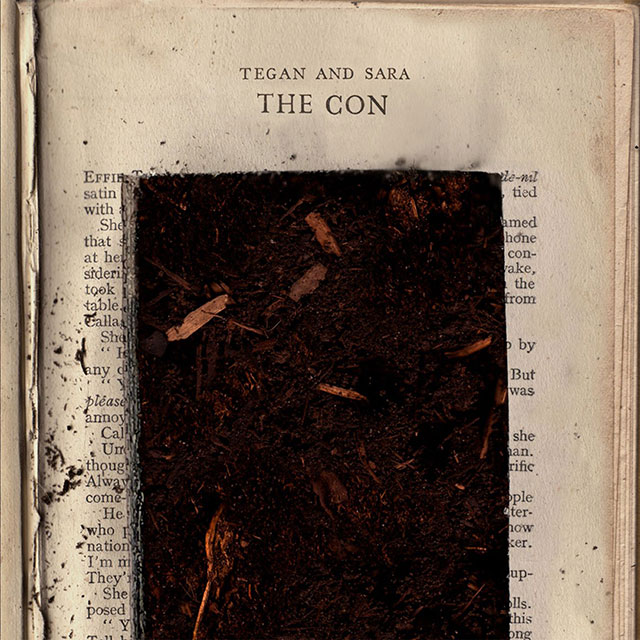 The square-within-a-square composition of The Con's album art always caught my eye and left me wondering why someone would cut out the pages of a book and leave it in the dirt. It's giving dark forest academia vibes and it fits so well with the '90s-grunge-queer-poetic goodness that drew me to Tegan and Sara in the first place. I was obsessed with the lyrics of this record and often used them in my angsty Facebook status updates during high school (all of which have been deleted … we don't need to remember her). Fav song: "Nineteen." 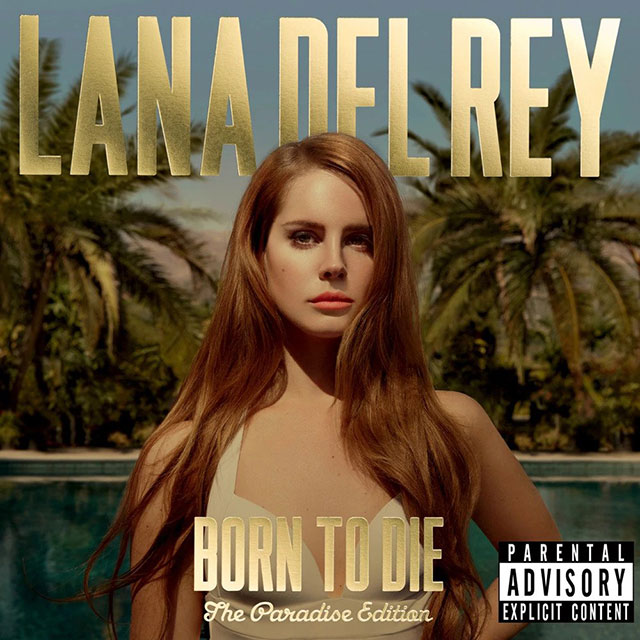 There aren't many albums that better encapsulate 2013 for me than this one. I always appreciated how the Paradise artwork reflects the Born to Die cover, but with a tropical setting/styling, as if LDR was just plucked out of Born to Die's Americana world and plopped down into Paradise. It creates nice continuity, especially for an extended release that's not a seperate album or EP. Fav song: "Bel Air." 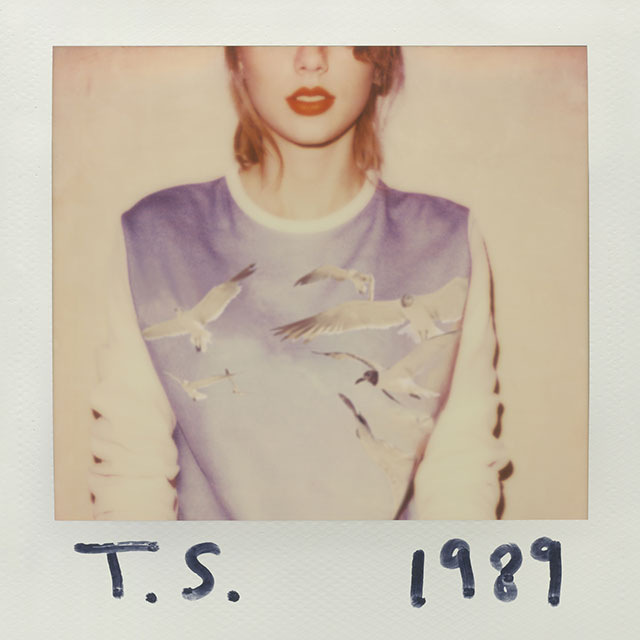 I was a casual Taylor Swift fan before this release, but 1989 turned me into a full-blown Swiftie. The accidental Polaroid on the album cover with the handwritten title sets the perfect tone for what this record is about, which to me is Taylor settling into who she is, coming to terms with her reality, and beginning the process of taking back her own narrative. It's not as obvious as Reputation, but she was certainly starting that journey here. Also, who among us wouldn't write an entire album about dating Harry Styles? I don't know how, but this album came out exactly when I needed it most. Right emotional breakdown place, right time. Fav song: "Clean." 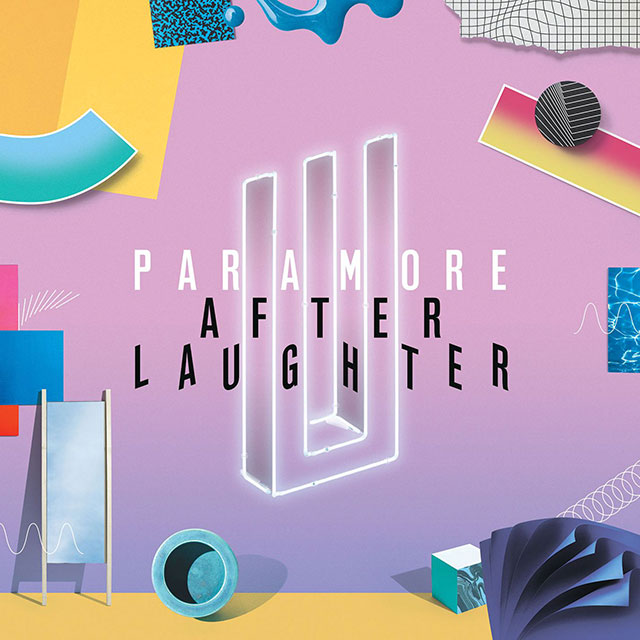 This album cover was designed by Scott Cleary, an L.A.-based designer who also helped with Paramore's rebrand. After Laughter has a lot of '80s influences, and so he incorporated that into the album art and used various shapes and textures to represent different moments throughout the album. He created a digital mockup to propose the idea to the band, and then eventually recreated each element in real life to photograph and bring back into the landscape for a more tactile feel. It's one of my favorite Paramore records. Fav song: "Rose-Colored Boy." 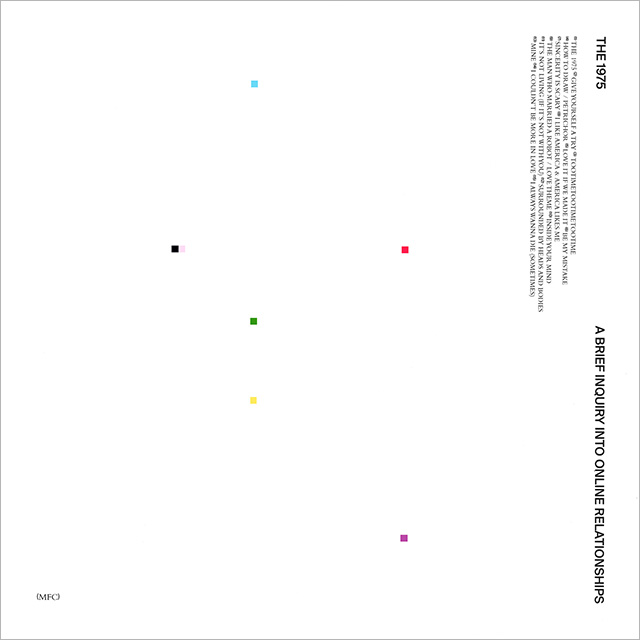 This is probably the most "designy" album cover on my list, which is not surprising considering how much thought The 1975 put into their branding. They're big on visual minimalism and A Brief Inquiry really leans into that, despite the fact that the record itself is anything but minimal. It spans a range of genres—pop, jazz, rock, experimental, etc. I couldn't find any info on the original intention of the colored blocks and their placement, but I like how they relate in some ways to the visuals the band uses in their live shows. And the title and tracklist turned on its side provides a weirdly annoying tension that really makes me want to turn it back, even though it's meant to be that way. Fav song: "I Always Wanna Die (Sometimes)." 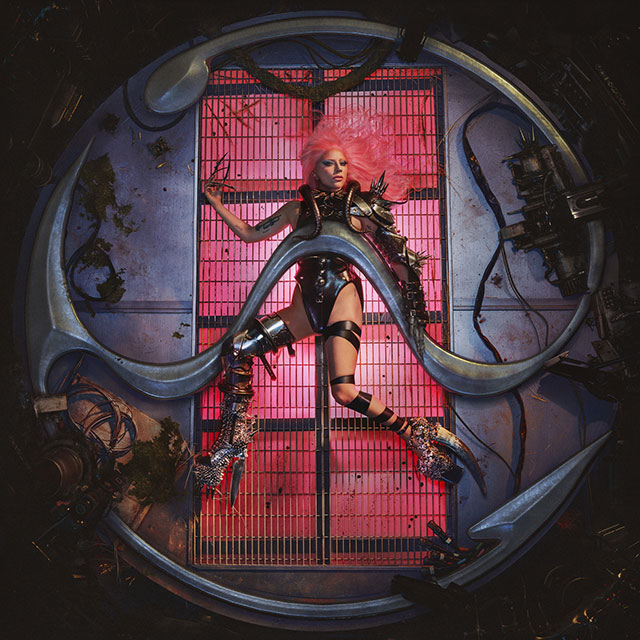 Although Born This Way is still my No. 1 Gaga record, I think the art direction that went into Chromatica was especially cool. I have to say I was pleasantly surprised to see her go back to her creative roots that were more present in the Born This Way/Artpop days, even though she's currently in her huge-commercial-artist era. The "Chromatica" logotype loosely reflects the shapes of the symbols that represent different factions of the Chromatica world. As a result, the logo is almost unreadable, which I love. If Chromatica is an alien world, then it shouldn't be confined to silly things like traditional letterforms. Studio Pending handled the graphic design for LG6, with incredible cinematic photography by Norbert Schoerner and styling (featuring some seriously insane shoes, even by Gaga™ standards) by Nicola Formichetti and Marta del Rio. Fav song: "Rain on Me" (with Ariana Grande). 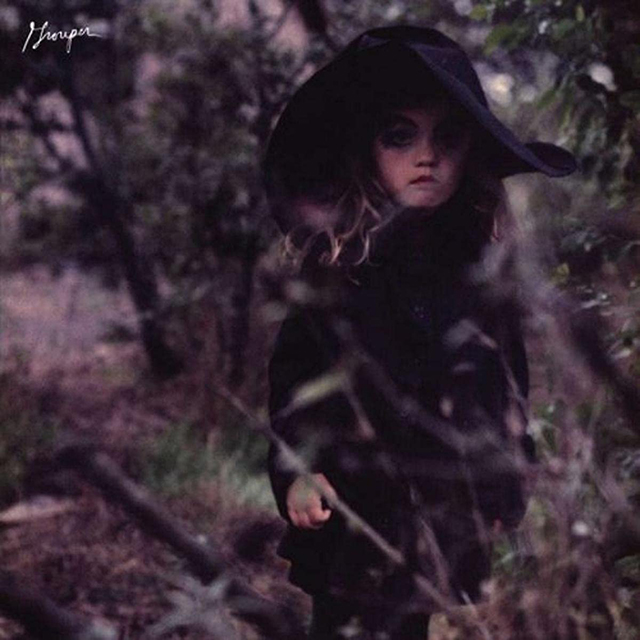 I just discovered this album this past year and it's now my go-to soundtrack for falling asleep. I read a review of Dead Deer by Owen Jones, and I think he put it best when he said, "[Liz] Harris' masterwork epitomizes the intangible echo-chamber of human grief, and willfully accepts the eclipsing depths of these sufferances." Another review by Gabriela Tully Claymore says, "Reviewing a Grouper album is like agreeing to listen to your own heartbeat for hours on end." The cover features a haunting photograph of the artist as a child in the woods, dressed in a witch costume. It seems like a photo that was taken for the very purpose of being an album cover. The meaning of this record is intentionally obscure, but it seems like the photo really encapsulates whatever it is. I honestly can't say much about this album because I've consumed it mostly while unconscious, but I can tell you it's beautiful. Fav song: "Heavy Water/I'd Rather Be Sleeping." 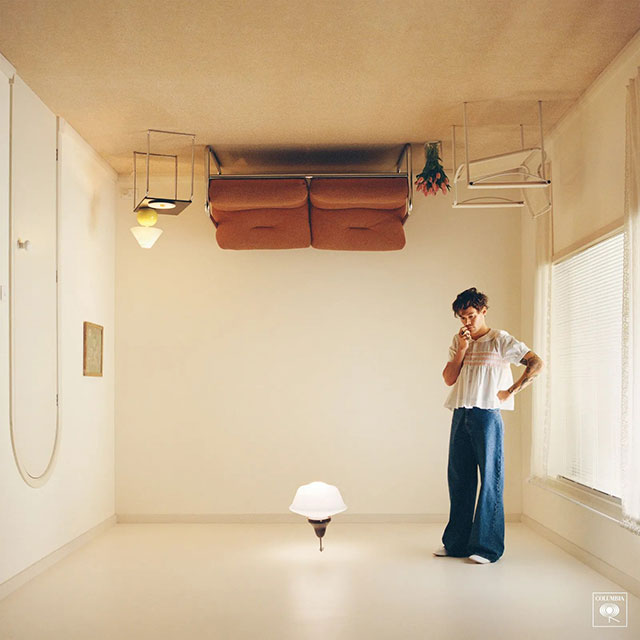 Hot off the presses, this album has become one of my favorites in the days since its release. This guy just keeps getting better. :smiling-face-with-tear: Harry's House was written in the midst of the pandemic while Harry had to stay in one place—an unusual circumstance for someone like him. He wanted listeners to feel like they're opening a door to some of his most intimate moments, which is certainly the case. He talks about phone calls with friends, quiet conversations, periods of solitude, long drives, and lots of reflection and reminiscing. The cover is a photograph by Hanna Moon and depicts Harry standing on the ceiling of a minimally styled living room. It conveys a sense of being alone, wandering around the house, and maybe getting a little lost in your own head. Fav song: "Little Freak." 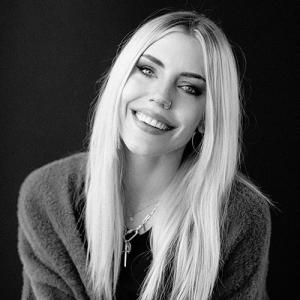