San Francisco and Los Angeles are next

The Brewer. The Baker. The Shopper. The Biker. The Hiker.

These archetypical Portland, Ore., characters (well, the Shopper might be a stretch, but just go with it) have been brought to gloriously quirky life by famous local agency Wieden + Kennedy in the form of huge statues—which have been touring the U.S. this year as a tourism stunt for Travel Portland.

And they're interactive! The backs of their heads open up like viewfinders. You can step up, peer in and watch animated videos (created by HouseSpecial) showing all the fun things you can do on a visit to Portland.

Most of the characters reference specific events or locations. For example, the Biker is naked in a nod to Portland's Naked Bike Ride; the Shopper has bought books from the beloved local bookstore Powell's, etc.

The statues made their way to Phoenix and Minneapolis earlier this year. This month, they embarked on a second tour. They hit Seattle last weekend, and are scheduled for visits to San Francisco (Oct. 20-21 at PROXY in Hayes Valley) and Los Angeles (Oct. 27-28 at Windward Plaza in Venice) next.

Check out the statues, simply called "The Portlanders," here: 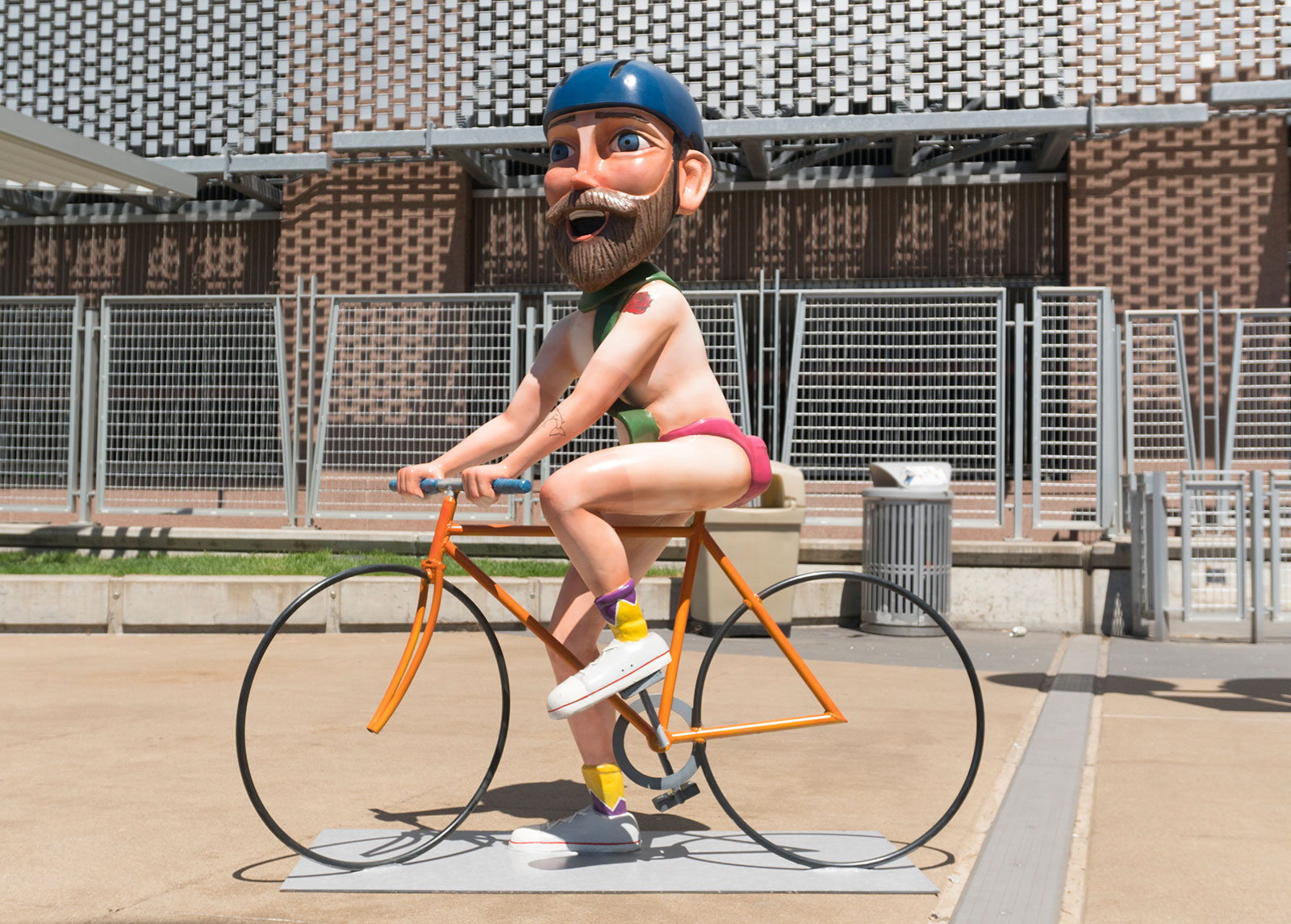 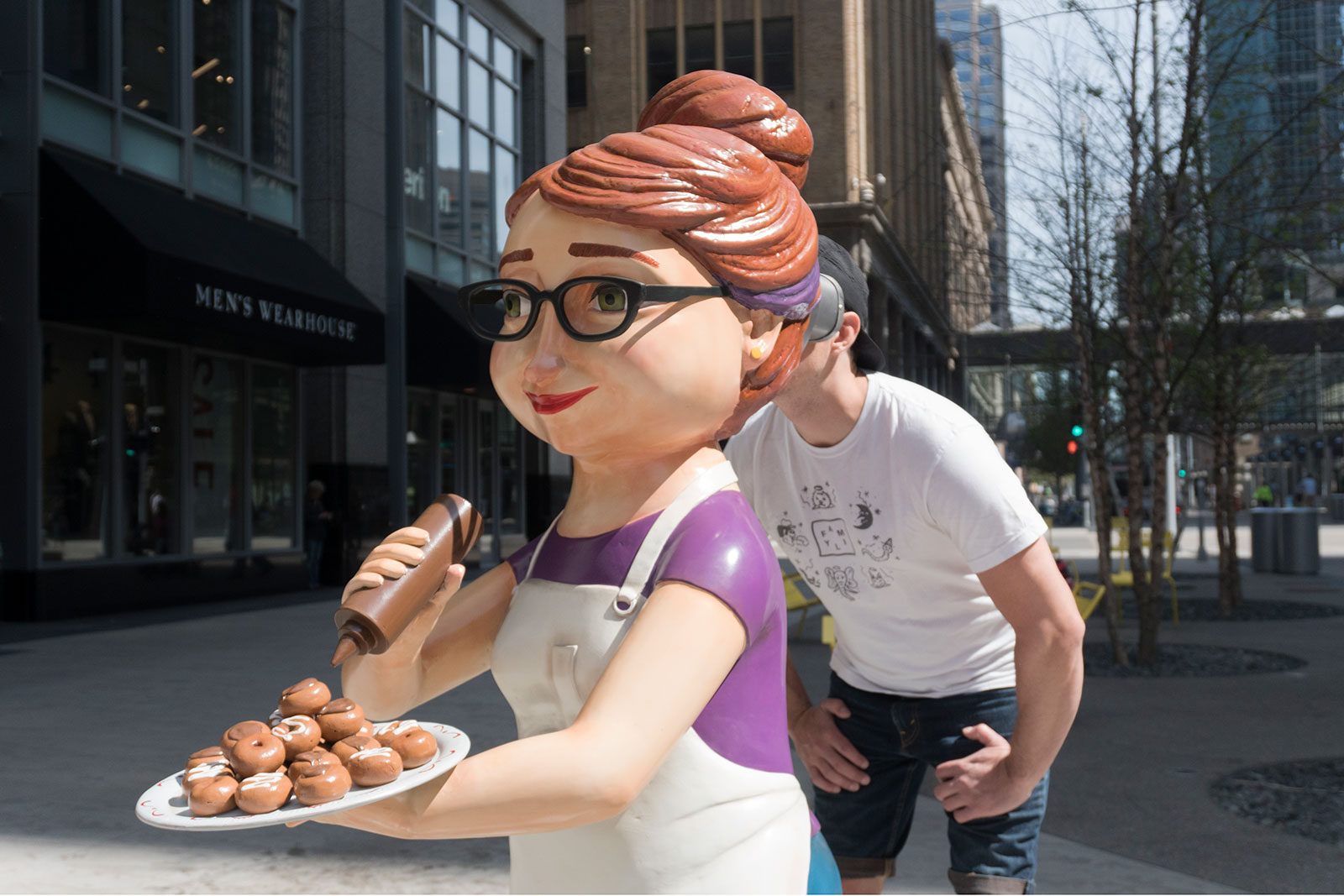 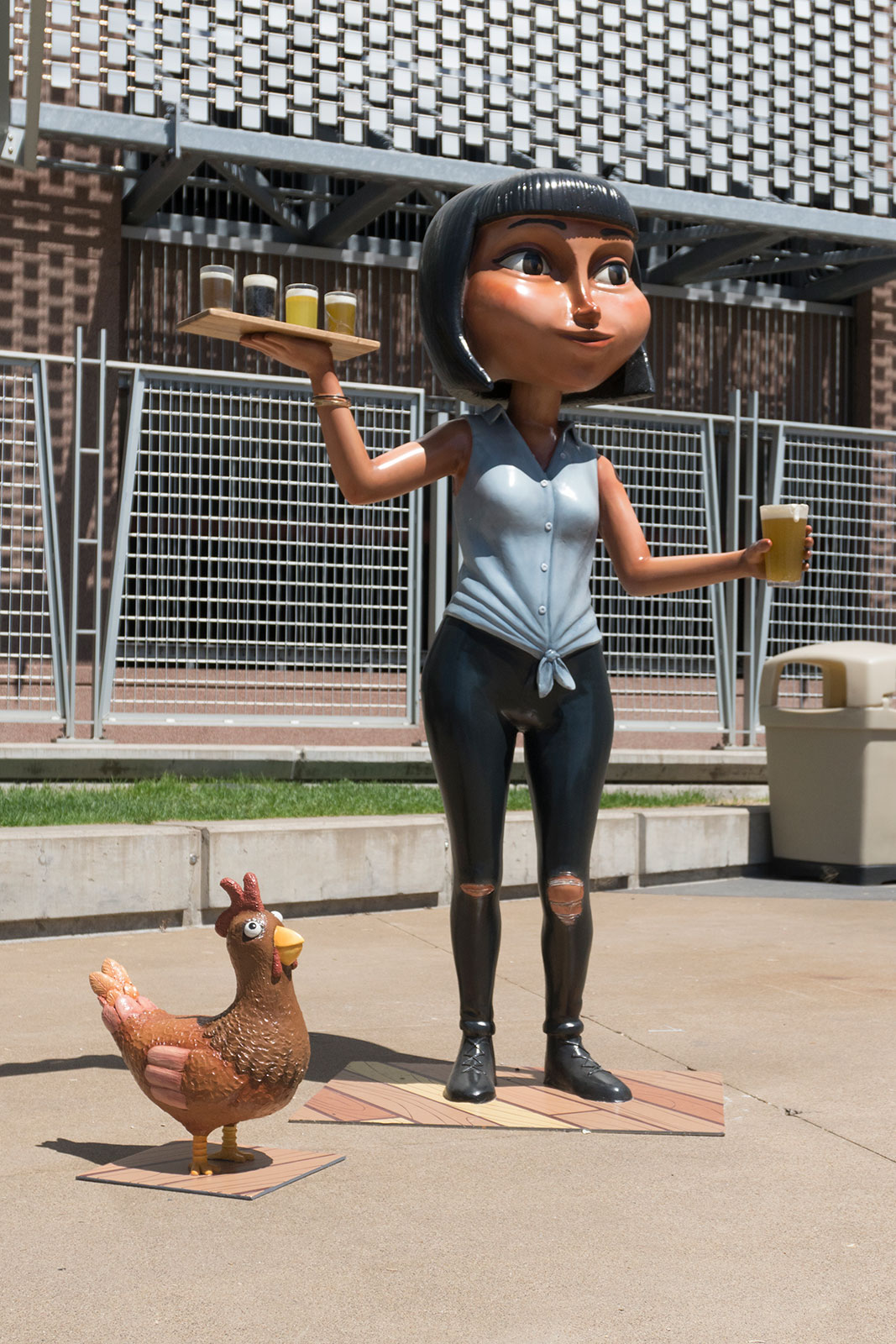 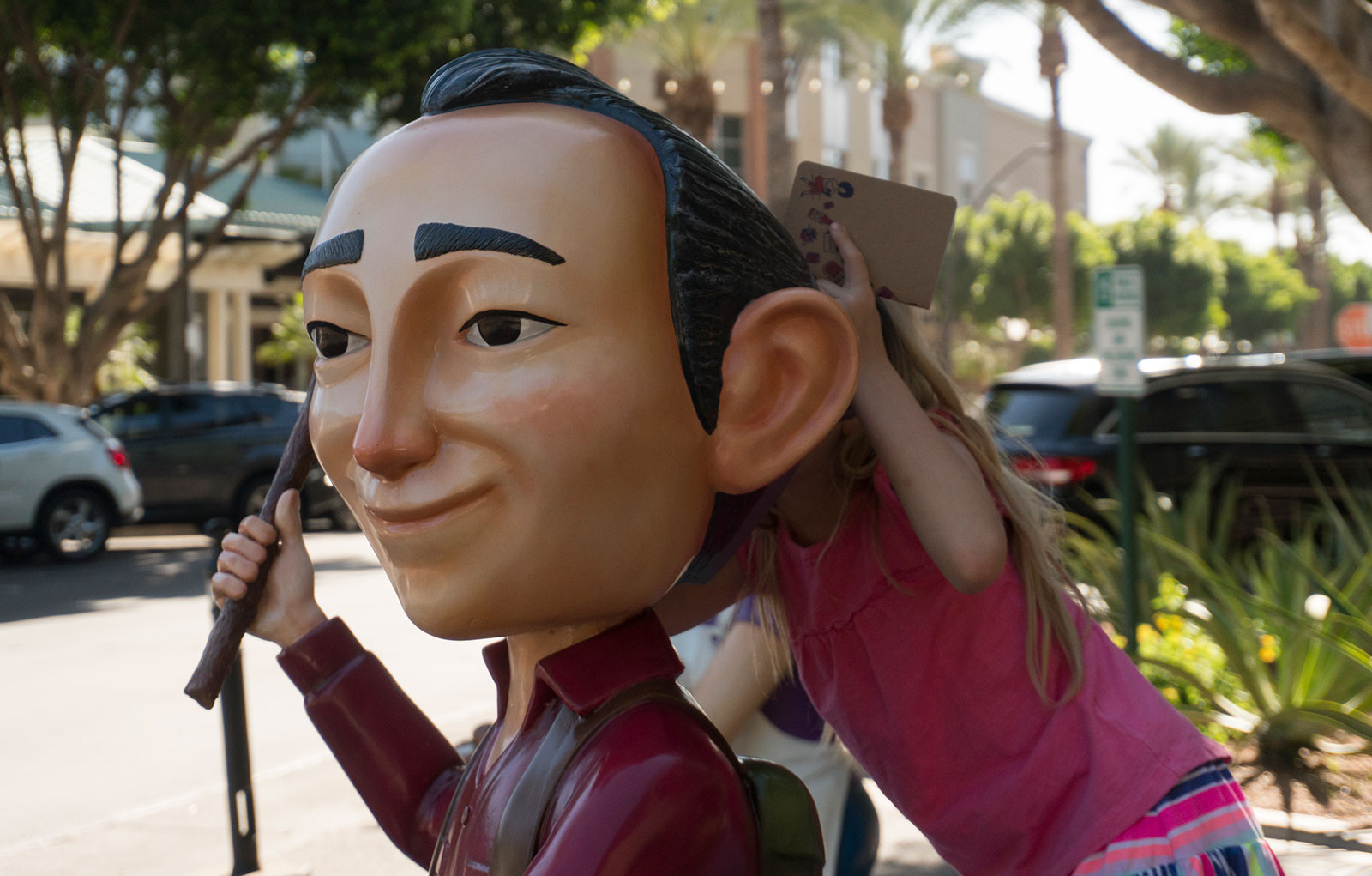 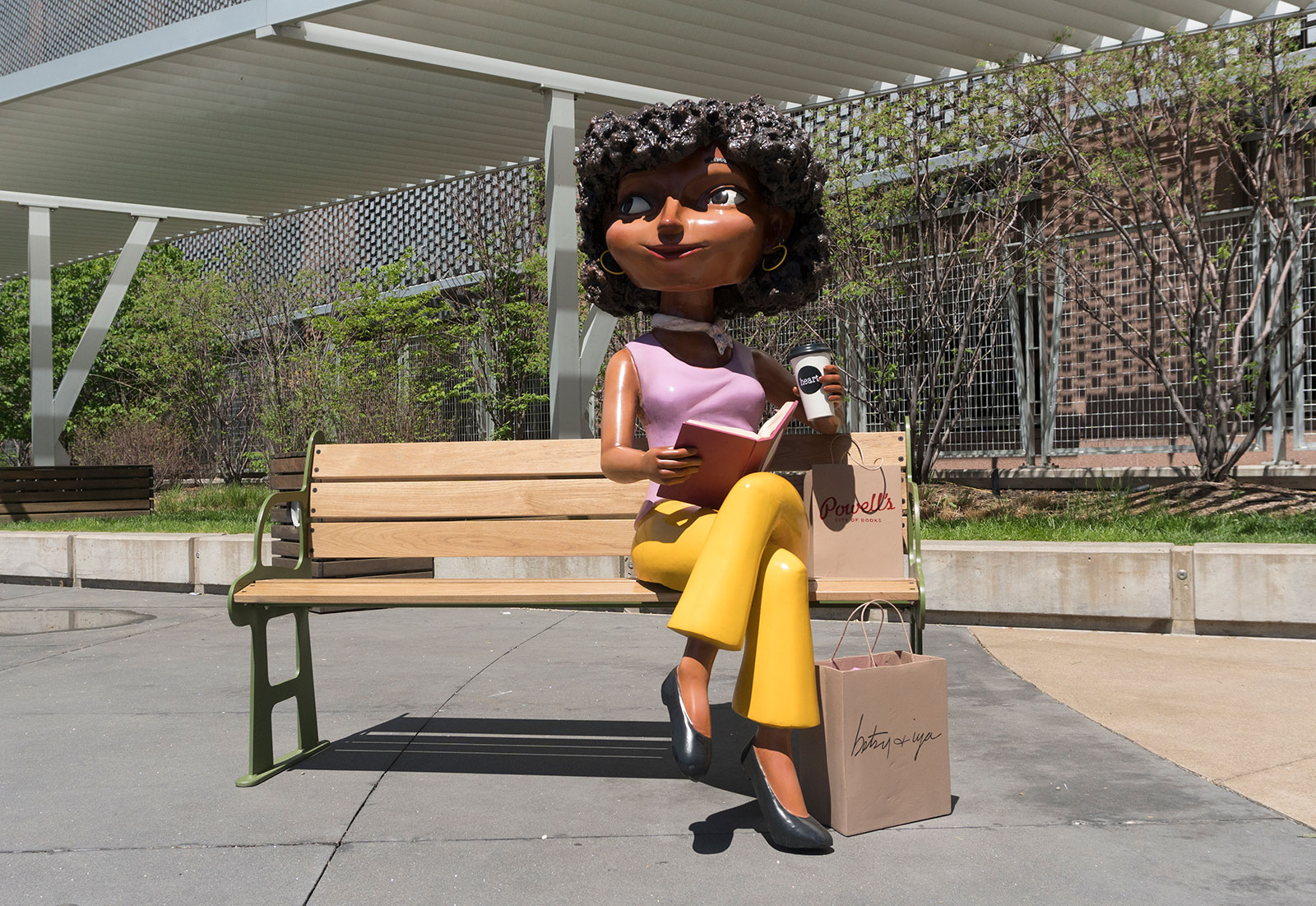 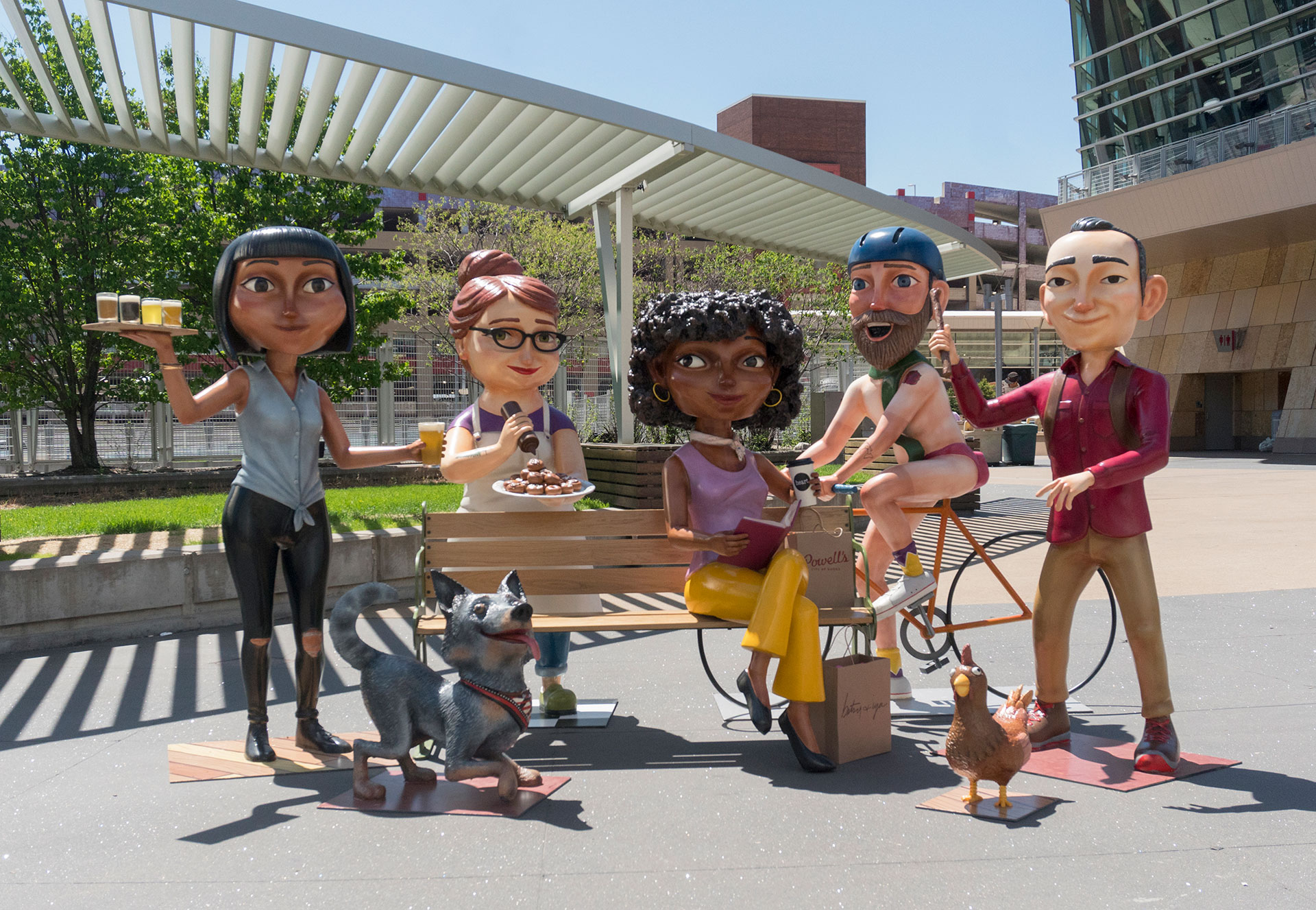 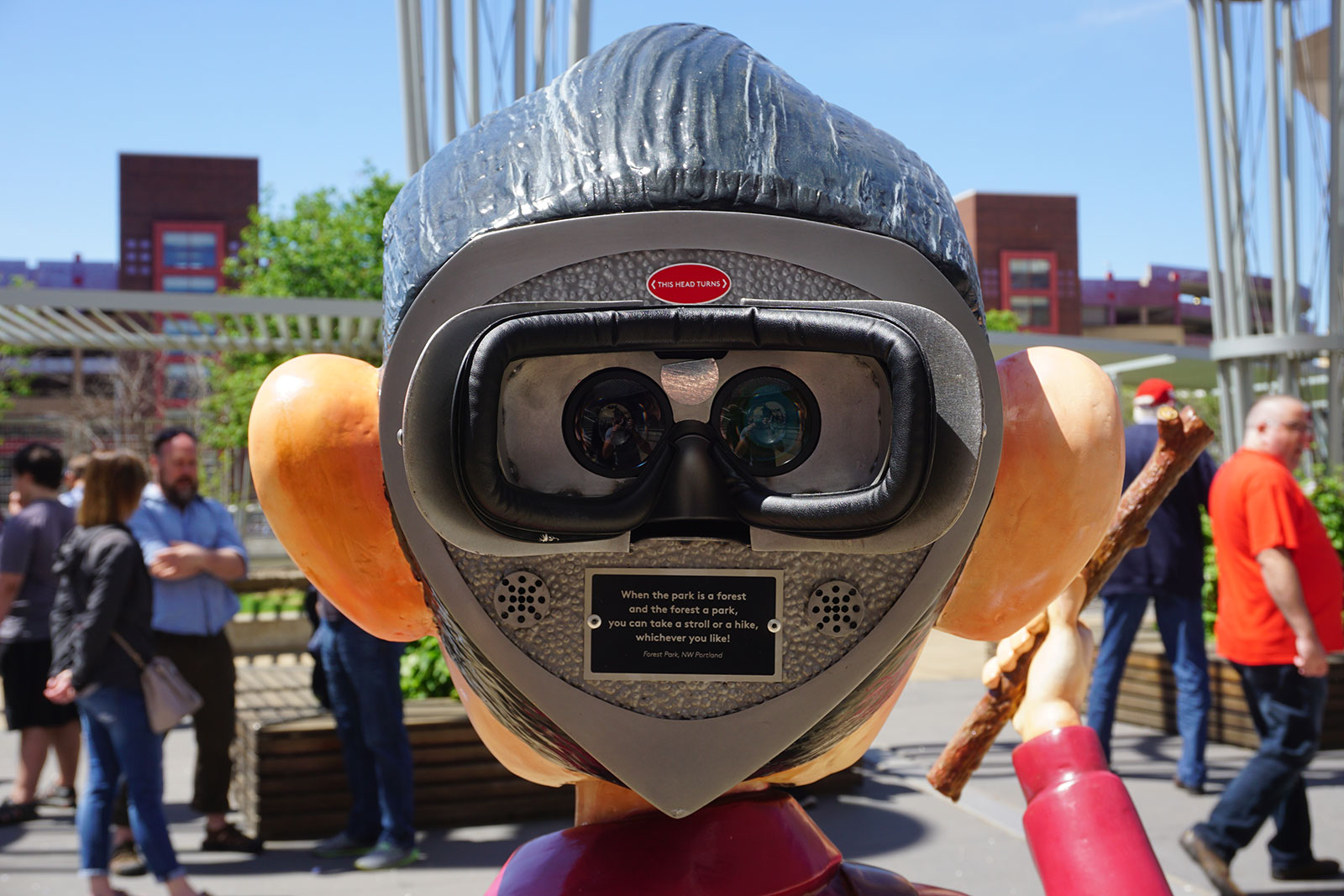 The campaign is an evolution of the "You Can, in Portland" campaign from 2017, which also featured animation.

A new TV spot is running in each target market, timed to when the characters visit. HouseSpecial did that spot, too, and designed the look of The Portlanders—though the statues were actually built by local artists Scott Foster and Nico Gross.

Here's an example of one of the videos playing inside the statues:

Muse spoke to W+K more about the idea and execution of the campaign.

Muse: Where did this idea come from, and what did you like about the notion of statues representing Portlanders roaming around the country?
Adam Tetreault, copywriter: We knew Travel Portland was interested in an activation—some kind of experience we could bring to people in their target cities, something different that would get attention and make people consider planning a trip to Portland. Which is a pretty broad sandbox to play in. From that brief, we talked a lot about all of the things that make Portland a great place to visit, and how they're the same things that make it great to live in Portland. "If only we could show people from other cities what Portland is like through the eyes of Portlanders," we thought. We had our concept—the rest was all the fun of figuring out how to bring it to life.

Portland has done event marketing in other cities before. Why does making things that are tactile work well for Portland?
Danielle Delph, art director: Making and makers are a big part of Portland's DNA, from the amazing food to the goods and shops all over town—and the culture in general; if a local Portlander isn't a maker themselves, they're sure to know someone who is. But beyond that, Portland definitely has a lore about it, a feeling or air that might best be expressed in something tactile and handmade as opposed to your traditional communications.

It's a fun mix of old media and new media in this campaign. Is that combining of contrasts part of what makes it compelling?
Adam Tetreault: We love how arresting the lifelike, life-sized statues are—how if you see them from a distance you have to stop and check them out. But then to also be able to interact with them in a surprising way, to look inside at the animated VR Portland locations to learn about the different things you can do there, that's the real game-changer for us. It's the combination of those things that makes it compelling for sure. Watching people's interest piqued by the statues was great, but then once they looked into the statues, turned their heads and really got it, that was the fun part. Building the viewfinders into the backs of our Portlanders heads felt like the cherry on top—a fresh take on a classic tourism device.

How did you settle on these five characters? Did you have a larger working list at some point?
Danielle Delph: We played with the idea of having more recognizable Portlanders, figureheads and classic Pacific Northwest characters like Sasquatch. Ultimately, though, we wanted to represent a broad swath of everyday Portlanders—people like ourselves who live here and are in the know about the types of places and activities around Portland that we often recommend to friends and family when they visit.

How were the characters' look and feel determined? How "cartoony" did you want them to be?
Danielle Delph: We wanted the characters to be approachable, so we leaned into going a more cartoonish route, but we still wanted them to look like they could be based on real people. The hiker, for example, is based on an older version of one of our producers on the project, Byron Oshiro.

Additionally, without playing up Portland clichés too much—you'll notice there's no flannel on any of them— we did want to represent real people you might bump into in Portland. Hence the tattoos, nose rings, beard, and yes, occasional nakedness.

What was the design process like?
Danielle Delph: First we worked with Travel Portland to decide which characters we wanted to represent which aspects of Portland, and then we started looking for references to bring them to life.

After we knew the characters' general profiles, HouseSpecial illustrated them and Scott Foster and Nico Gross went on to build miniature maquettes—mini, clay, to-scale statues—that were used for approvals and as references to ultimately sculpt the larger statues, which were constructed using steel frames and a dense foam for the bodies and heads.

For the animation films that live inside the viewfinders, we landed on a look and feel that we felt had the most personality and magic for our 2-D space. We worked with HouseSpecial to get all the little moments of humor in each one, like Mavis the chicken showing up in every video.

How did you choose the cities to travel to, and what has the response been like?
Adam Tetreault: So far, the statues have traveled to Scottsdale, Arizona, and Minneapolis. Those cities were chosen by Travel Portland as "target cities"—places home to their target demographics that also happen to have pretty painless flight options—to get people to visit Portland. The response was great in both cities; kids, parents, grandparents all loved them.

We are taking them to other cities in the fall [Seattle, San Franscisco and Los Angeles). There's also talk about bringing the Portlanders to Tokyo. We think they would get an amazing reception there. So, fingers crossed.

How have you advertised the events, and what else have the events entailed?
Danielle Delph: We designed and put up wild postings all around the cities before our visits, as if the Portlanders were a band coming to town. Beyond that, we worked with radio stations and made Facebook events to promote them.

At the events themselves, we answered a lot of questions about Portland, made specific recommendations on things to do and see, and handed out Portland-y giveaways.

Aside from the specific Portland attractions being advertised, does the generally unusual approach here help communicate that Portland is a weird and creative place to visit?
Adam Tetreault: You mean if the medium is the message, what do a group of life-sized statues with animated VR viewfinders in the backs of their heads say about Portland? We hope they feel Portland, yes. By which we mean we hope the takeaway people have after experiencing the Portlanders is that, besides having lots of amazing things to do and see, Portland is a quirky, creative, different, and welcoming place to visit.

What was most challenging about this project, and what was most rewarding?
Danielle Delph: This was an altogether different process than, say, making a TV spot. So both the most challenging and rewarding part of the project was probably taking the idea in our heads—a thing that had never been done—making it a shared vision with local artists, sculptors, animators and producers, and bringing it to life in all of its strange, very different parts.

Luckily for us, everyone who worked on the Portlanders are Portlanders themselves, so they were all excited to get to represent their city in a way that really utilized their talents.

See the other animations below.