As usual, Andrew Cuomo and Bill de Blasio both have letters in the official Advertising Week New York program—extolling the virtues of New York. But this year, they have some competiton. From Minneapolis.

The CEO of one of the top agencies there, Colle McVoy, has placed in its own letter in the program, mimicking the New York ones, to sing the praises of Minneapolis—which Christine Fruechte refers to as "the greatest city of the north."

She goes on to tout the city as a great place to "grow a portfolio, a career, and because you'll never want to leave, a family." For those concerned about the weather, Fruechte quotes Prince: "It's so cold, it keeps the bad people out." 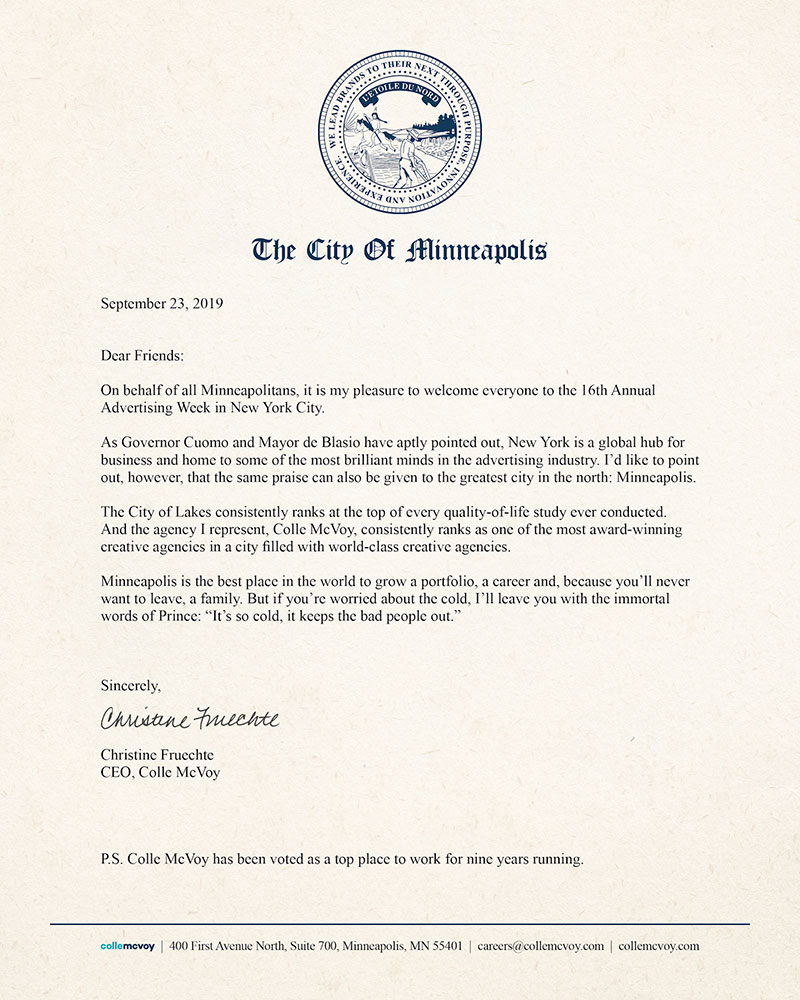 The creative team of associate creative director Lee Hanson and designer Ben Hait came up with the idea while looking through old Advertising Week programs. Up until this year, the governor and mayor letters were always standard, official-looking letters—this year they’re designed with their images overlaid. Since the letters have been a long-standing tradition and tend to catch attention, they decided to use the format, but in an unexpected way.

"We are always trying to attract great talent to Minneapolis and our agency," Fruechte tells Muse. "Once people get here, they rarely want to leave. So, we decided to use the Advertising Week ad as an extension of our ongoing recruitment efforts. With so many professionals convening in New York City for the event, it's a great vehicle to capture their attention. And often these industry events inspire people to consider career moves or open them up to new ideas. We hope they'll come explore Minneapolis."