Why McDonald's Just Built a Tiny Restaurant for Bees

Building buzz in Sweden with the McHive

The world's smallest McDonald's serves only bees. Thankfully, they're not on the menu. In fact, they're guests at the tiny restaurant, which itself is a working beehive.

This impressive model stands about 16 inches high. It's a real honey (heh), complete with Golden Arches, signage and a drive-thru. 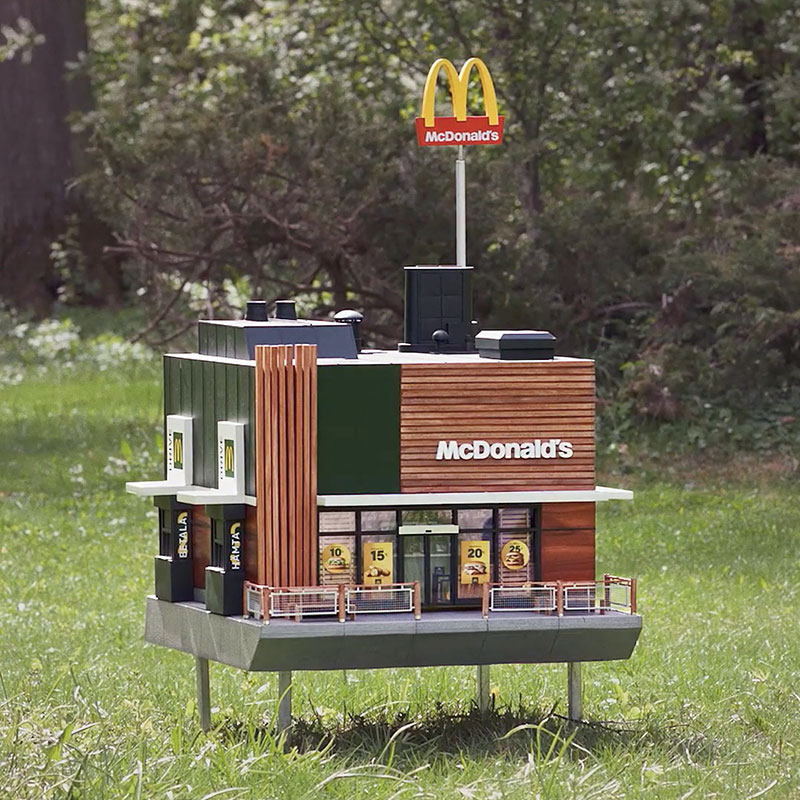 Of course, the thousands of bees inside don't care about such lovingly crafted details. They spend their days happily guarding the queen, buzzing off to pollinate flowers, and so on. It's a full life!

In fact, bees' lives are exactly what this initiative is all about.

By now, just about everyone knows bee populations are declining. In recent years, some colonies in North America and Europe have experienced death rates far above normal, often exceeding 50 percent. Since bees play a key part in our planet's ecosystem—pollinating one-third of our food crops worldwide—their extinction would be a nasty sting for us all (heh—hey, that's not funny!).

What's more, just about everyone knows brands have stepped up with campaigns related to the cause. The McHive represents the latest such corporate push for awareness.

Now, at first glance, bee conservation might seem like an odd choice for the fast-food company. Plenty of brands feel like a better fit, like Honey Nut Cheerios, which banished its Buzz mascot from cereal boxes three years ago to generate publicity for the cause.

Still, there's method to this McMadness. Devised with Nord DDB, the McHive was actually inspired by beehives that a Swedish franchisee placed atop five of her restaurants. Plus, McDonald's plays an outsized role in the modern food chain, with a vested interest in bringing bees back from the brink.

"It's an issue that effects us all," Petter Dixelius, senior copywriter at Nord DDB, tells Muse. "McDonald's Sweden's brand statement is, 'Big enough to make a difference.' In the latest campaign, we highlight small local initiatives that McDonald's is scaling up. One of those initiatives is from franchisee Christina Richter, who has beehives on her restaurants' rooftops."

Fair enough. But why build a mini-Mickey D's?

"Could there be a cuter way to illustrate such an important issue?" Dixelius asks.

Now, McDonald's has its detractors who might disparage this particular enterprise. They'd say fast-food places attract plenty of bees, especially near the dumpsters, and ask if McHives afflict those who scarf down too much special sauce.

"Jokes aside, we think everyone is happy that such a big brand as McDonald's would recognize and act on this important issue," Dixelius says.

The McHive was auctioned off yesterday for $10,000. The funds will support Ronald McDonald House, the company's foundation for sick kids.