How can we get into a building like that? 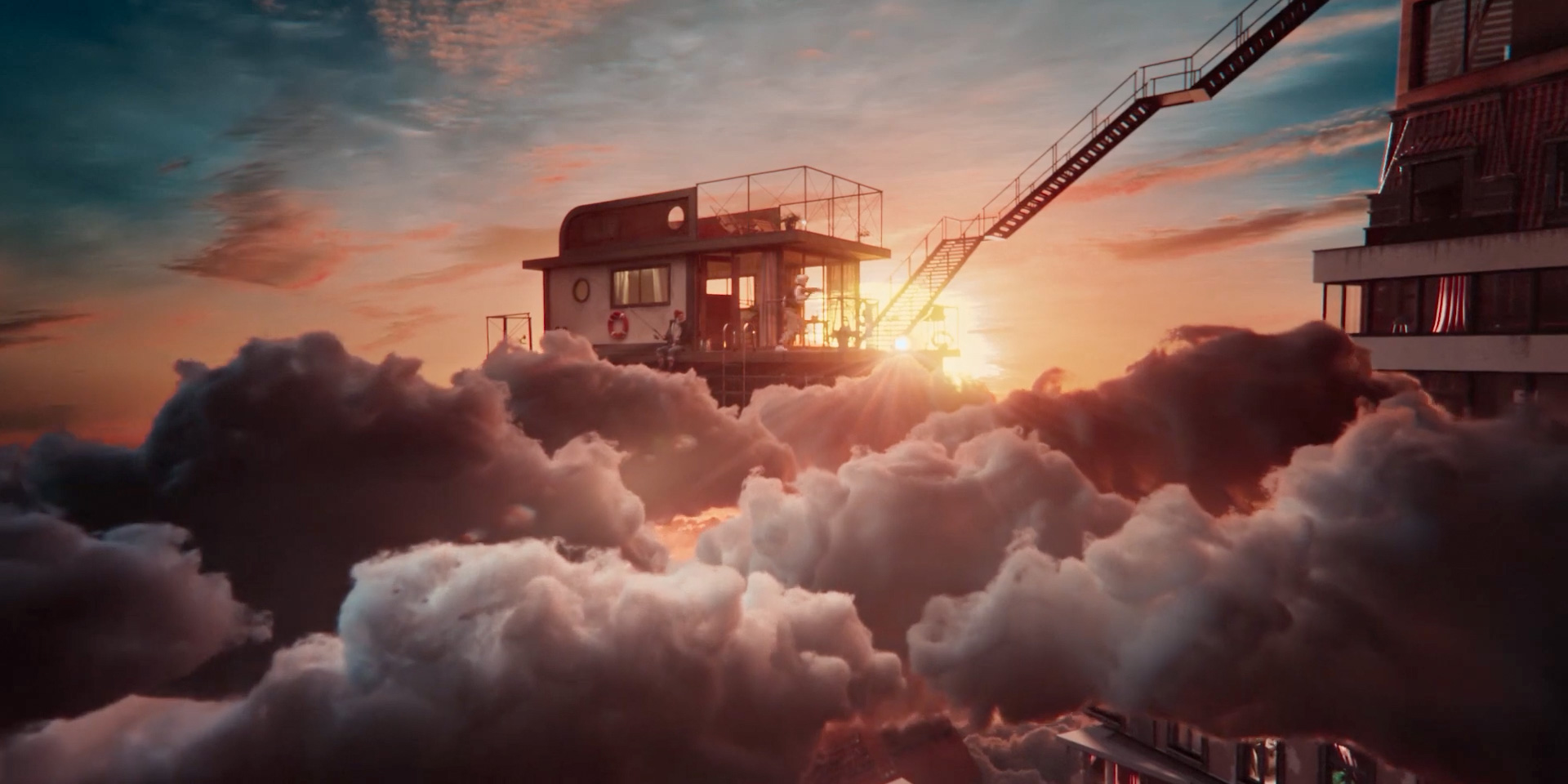 With Serviceplan Bubble and Neverest Hamburg, German telecommunications company O₂ has released "Every Home," which follows a pizza delivery person up a dizzying, whimsical apartment complex.

The work kicks off in a room full of gamers, who irritably respond when the buzzer sounds—a delivery they already know is not for them. "Hello, top floor," one says into the intercom with an eyeroll. And with that seemingly simple instruction, the pizza's off to the races.

The delivery person skips up the steps and hits the topmost button in the elevator, the sixth floor. Seems basic enough. But the elevator opens onto a rooftop, where a single person indicates, with a finger, that this is far from over. Up the fire escape we go, and further still, into dizzying heights that provide an array of insight into the many ways people live … and, incidentally, use the internet.

I'm reminded of a conversation I had with my cable guy, who spent an hour installing my network. He roved around my apartment, looking for appropriate connection points.

"You must spend so much time in other people's houses," I said. "Do you ever notice weird stuff that's no longer weird to the people who live there, because they live there?"

He stared blankly for a while, then finally replied, "Yes." He pointed … slowly, and not, I think, without judgment. "I noticed your big plastic dragon statue."

This did not make the situation less awkward. Anyway, "Every Home" seeks to convey similar kinds of personal cosmos. Nestled within this apartment building, "Gen Z and boomers, gamers and yogis can be found in their homes engaged in activities made possible by O₂'s high-speed internet."

The work feels like an early scene in Wes Anderson's The French Dispatch, where a waiter efficiently balances a tray while traversing a labyrinthine building. The viewer watches him disappear and reappear, at various odds and ends, from a distance. But the ad's chaos, and the teeming building, also reminds us of Hayao Miyazaki's Howl's Moving Castle, where a magician lives in a walking house whose anodyne exteriors open into streets all over the country, even as the interior grows to unwieldy proportions, based on the changing—sometimes forgotten—needs of its occupants.

For O₂, this served a practical purpose. "In order to communicate our message as simply and memorably as possible, we have developed the 'Every Home,' a house in which we stage scenarios of different types of internet usage in different dwellings," explain Leif Johannsen and Patrick Matthiensen, managing partners of creation at Serviceplan Bubble.

"Every Home" follows O₂'s "The Visible Net," which worked magic in a different way. It took place outside, in a cityscape. In this ad, Serviceplan Bubble rendered the network's 5G connections visible through a sinuous array of lit panels, held aloft, queerily still, by a fleet of drones.

There is something nifty at play here. Today, internet connectivity is taken for granted, even derided. But these works bring a pleasing spookiness back to this utility. This is how electricity must have felt in its early days, when, as dusk fell, rows of lamps would suddenly light up beyond you. While "The Visible Net" focuses on 5G as an invisible force, pulsating through our water and in our skies, "Every Home" harkens to the intimacy of its function. Our uses of it are so personal and so different that it's easy to forget we're not all sitting around, uniformly "surfing the web."

Created under the banner "Home internet. For every home," the spot will appear on all major German channels and is reinforced by print, outdoor, online and social media ads, as well as in cinemas in its full-length version. It was directed by Rekorder's Rodrigo Saavedra, with DP Benjamin Todd and 3-D production by Sehsucht Munich.

"O₂ has the largest home internet availability in Germany and is the first German provider to offer a fixed network tariff for all technologies," says Michael Falkensteiner, director of brand and marketing communications at O₂ and its parent company Telefónica. "Therefore, we also want to make O₂ a well-known and popular brand for fixed network offers and significantly increase the perception of our Internet@Home products. We want the O₂ brand to be firmly anchored in the minds of consumers when they think of fixed network."