The Story of the Amul Girl, India's Ad Icon Who Was Ahead of Her Time

In the age of social media, it's become known as real-time marketing—brands throwing witty remarks about current events into the social flow.

But the Amul Girl has been doing her own unique, entertaining version of it for more than half a century, commenting on pop culture in advertisements that were immediately viral, in their own way, when they launched outdoors 53 years ago. And remarkably, the style and approach of the campaign hasn't changed too much at all in the course of that time.

The story of India's most beloved advertising icon begins in 1966, when Dr. Verghese Kurien—who almost singlehandedly turned India into the world's largest milk producer—was looking for an ad campaign for Amul butter, made by the Amul dairy co-op he'd founded a decade earlier.

He gave the job to daCunha Communications in Mumbai, led by Sylvester da Cunha. At the time, advertising on TV and in magazines in India was wildly expensive, so the agency decided to try billboards—featuring a blue-haired girl in a red polka-dot dress who would become the country's most famous advertising character.

The Amul Girl was sketched by art director Eustace Fernandes. Her first ad described the product as "utterly butterly delicious," a delightfully goofy phrase coined by Sylvester's wife, Nisha da Cunha, and a sign of pun-ny things to come. 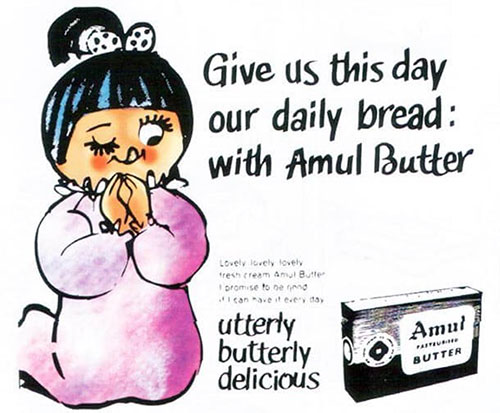 The first ad was a hit, and the agency suddenly had a popular ad mascot on its hands. The Amul Girl went on to star in five decades (and counting) of well-loved billboards. And when the agency ran out of things to say about the product, they started referencing current events, just as so many brands do on Twitter today.

Indeed, Amul was a kind of proto-meme brand, and its own embrace of Twitter, where it now posts all of its ads, in addition to putting them on billboards, has been a natural extension of a half-century-long engagement strategy.

"She became like the Michelin Man, that kind of character," Sylvester's son Rahul da Cunha, who now runs the agency, told Muse in a phone interview this summer—on what happened to be the 25th anniversary of the day in 1994 when he took over running the campaign from his father.

"At some point I think Dad realized that just talking about butter wouldn't sustain itself for long. So he hit on this idea of social commentary. At a certain point, it went from commenting on one topic a month, or every two months, to what we do now—which is literally looking at a topic almost every day."

Working with copywriter Manish Jhaveri and illustrator Jayant Rane, da Cunha keeps the Amul Girl busy these days in ads that reference all kinds of current events, from entertainment to sports to politics. The work makes liberal use of puns—the multilingual Jhaveri has the rare skill of being able to pun in both English and Hindi—which can be groan-inducing but is part of the campaign's charm.

Here's a sampling of recent ads:

The fire at Notre Dame cathedral in Paris

The final season of Game of Thrones

Da Cunha, Jhaveri and Rane connect every Monday and begin the process of creating topical work for the week.

"We list all the potential topics we feel have relevance and resonance and durability for the week," da Cunha says. "Let's say the U.S. Open is on—who's likely to win? Trump and China are talking about trade tariffs. A Bollywood film has been launched—how's it going to do? Then, what deserves mention first? We work on possibilities for the headline. Jayant starts painting, Manish starts writing. Three or four hours later, we meet and see where we're at. By evening, the first ad is out on digital. By nighttime, it's out on billboards."

The Amul Girl herself appears in most, though not all, of the executions.

"Very often she becomes the person in the ad," says da Cunha. "Say we have a hoarding on Trump—she will become Melania. Or if it's a Bollywood film, she will become Aishwarya Rai or Priyanka Chopra. She's a cartoon, and she can morph and camouflage and be a chameleon, where she becomes the topic she comments on." 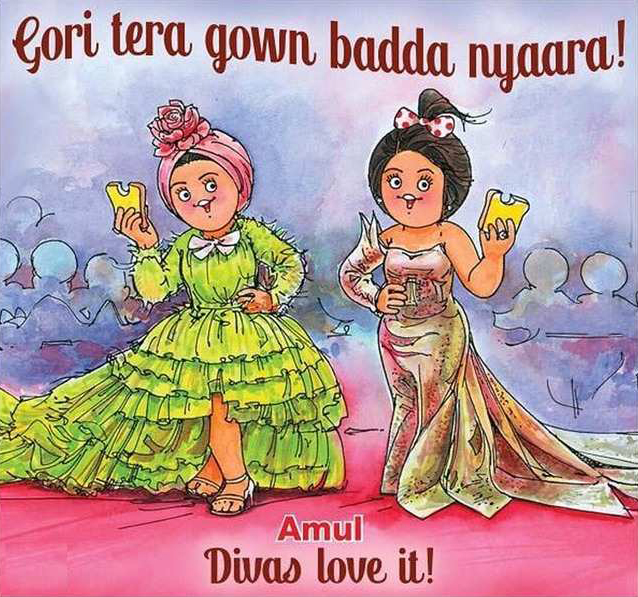 Deepika Padukone and Aishwarya Rai at the 2019 Cannes Film Festival

Rane still hand-paints every ad, after pencil-sketching three or four options first. The original billboards, decades ago, were hand-painted on site as murals. Now, of course, Rane's illustrations are simply reproduced on vinyl sheets for use outdoors—the typical process for billboards today.

"In the old days you were at the mercy of the hand-painter," says da Cunha. "The poor guy was up on a scaffolding, desperately trying to paint and not fall down. It's much easier now, and much quicker. I can put up a billboard for a day and a half if I need to."

Politics is a common theme for the Amul Girl campaign. And yes, da Cunha and his team—much like late-night talk-show hosts—have benefited in many ways from the relentless buffoonery of the Trump presidency.

Even as world politics has gotten grimmer, though, the Amul ads remain lighthearted.

"We comment on whatever's happening, both in the country and internationally," says da Cunha. "Mostly it's about sport, it's about cricket, it's about Bollywood. But it definitely gets political. And our politicians are hugely colorful. In India, politics and religion, which were two aspects of our lives that used to be quite disconnected, have become quite connected. Hinduism and nationalism have become intertwined. "How nationalistic are you?" has become the question Indians are being asked today. And so, because we do social commentary, I have to navigate that."

He tries to do so as deftly as he can.

"We want to keep people smiling," he says. "The whole purpose of this campaign has always been to put a smile on people's faces. Our job is to make sure, even when there's darkness, to keep it light."

Da Cunha is particularly fond of one recent political ad based on a viral moment in the Indian parliament in July 2018, when Congress president Rahul Gandhi walked over and gave Prime Minister Narendra Modi a hug.

"Embracing or embarrassing?" read the Amul ad, which was released less than two hours later.

As much legacy and equity as the Amul Girl has, there is obviously the risk that she will start to feel outdated, which is a concern to da Cunha.

"She is 50 years old, so that's a challenge," he says. "The 40- and 50-plus person already knows us. There's a lot of memory and affection, and a nostalgic sense for it. But digital has helped a lot. We're able to tackle issues that stay digital—that perhaps wouldn't go up on a billboard because they wouldn't be relevant to the common man. But that's one of my concerns. How do we stay relevant to a millennial audience who has a shifting appetite and a shifting fascination with different media vehicles almost on a daily basis?"

For now, the campaign is still going strong. And da Cunha believes it will continue—who knows, maybe for another five decades.