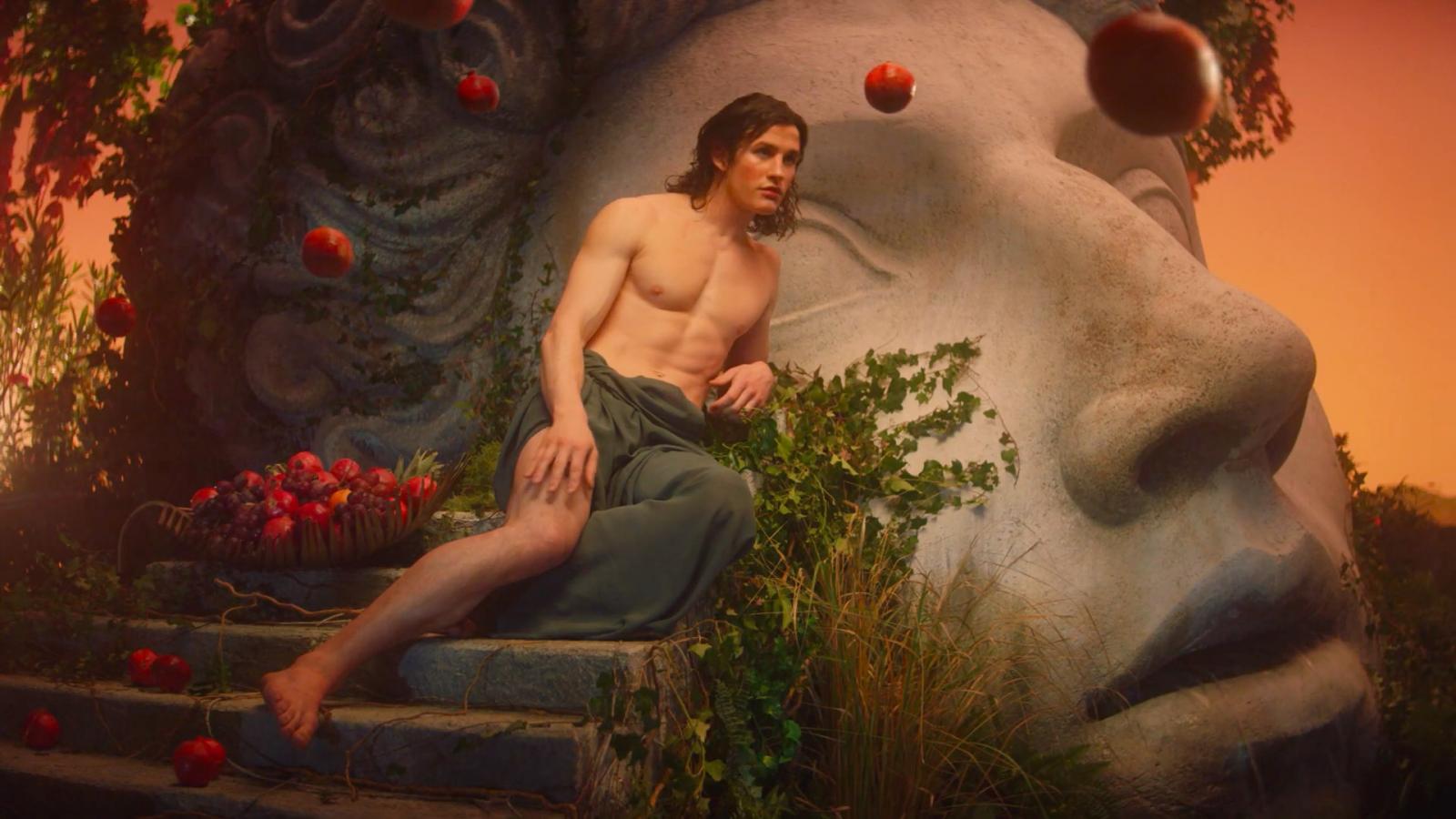 Is narcissism actually good for the world?

From a Grecian Narcissus type bent on building his body and mind to a coffin containing a contented corpse, lifestyle and fitness brand Equinox—in its first big push from Droga5—mixes eccentric elements and impudent humor in a quirky post-holiday-gorging campaign.

First up, we have a short film with a stud of mythic proportions who falls head over heels for his own reflection:

The Most Selfless Act Of All | EQUINOX

Hey, hefting boulders is cheaper than paying thousands a year to work out at Equinox!

In the end, the guy molds his entire being into "a gift not just for him to treasure, but a gift that brought the whole world pleasure," says the narrator, coiffed a bit like '80s singer Grace Jones. "And so I put this question to you all: Does that not make self-obsession the most selfless act of all?" At that point, everyone breaks into silly techno-dance, naturally.

"We're targeting individuals dedicated to becoming the very best they can be," says Equinox chief marketer Seth Solomons. "But rather than a solely individualistic pursuit, we believe that when you become the best version of yourself, you radiate outward and contribute more to the world around you."

So, they inverted the Narcissus story, which, by the way, ended badly in classic mythology because he could never attain the object of his desire. (Makes us want to just stretch out on the couch and scarf down ice cream instead of hitting the weights.)

Print ads, meanwhile, include a colorful funeral procession with a beatific bloke in a coffin, and two naked men doing … something or other: 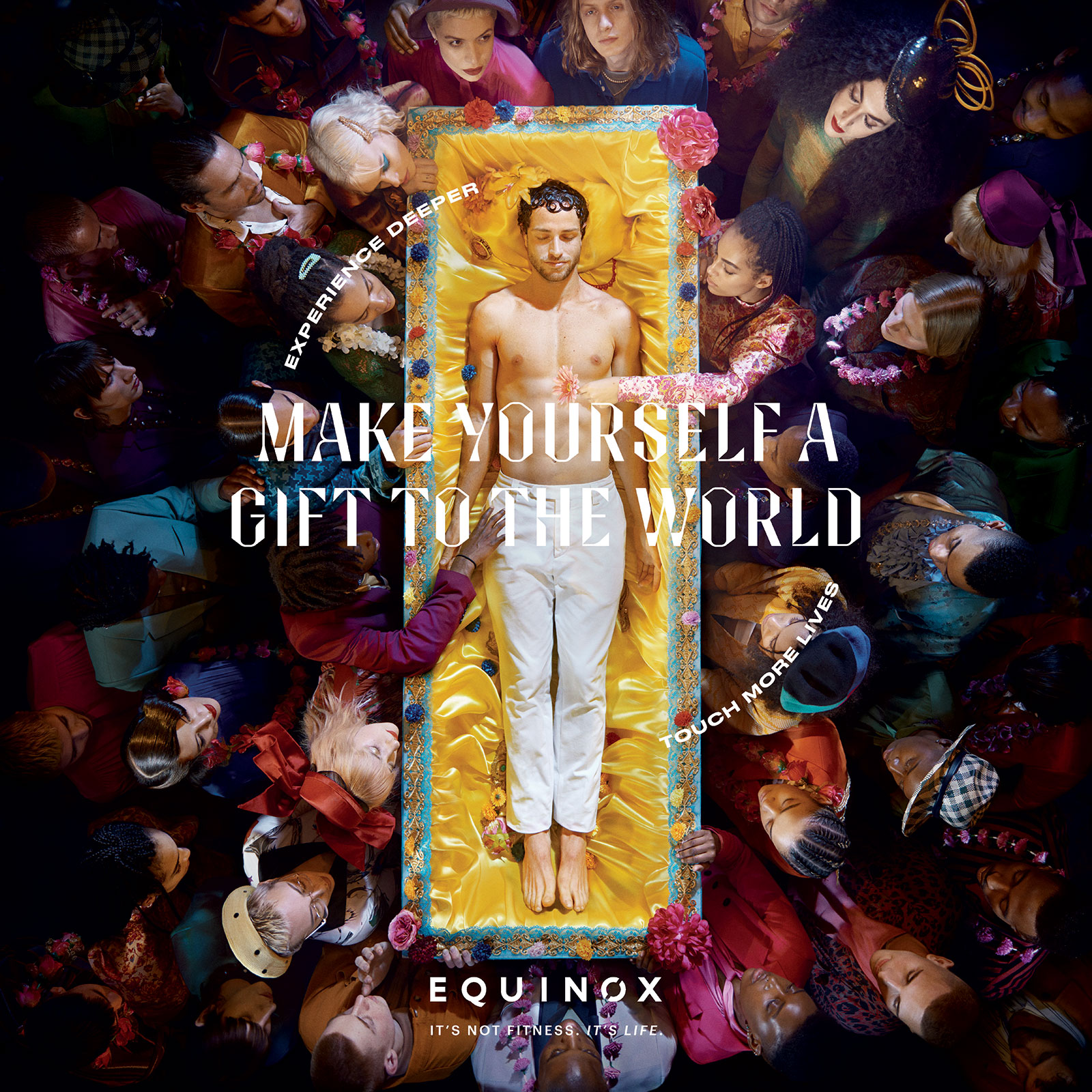 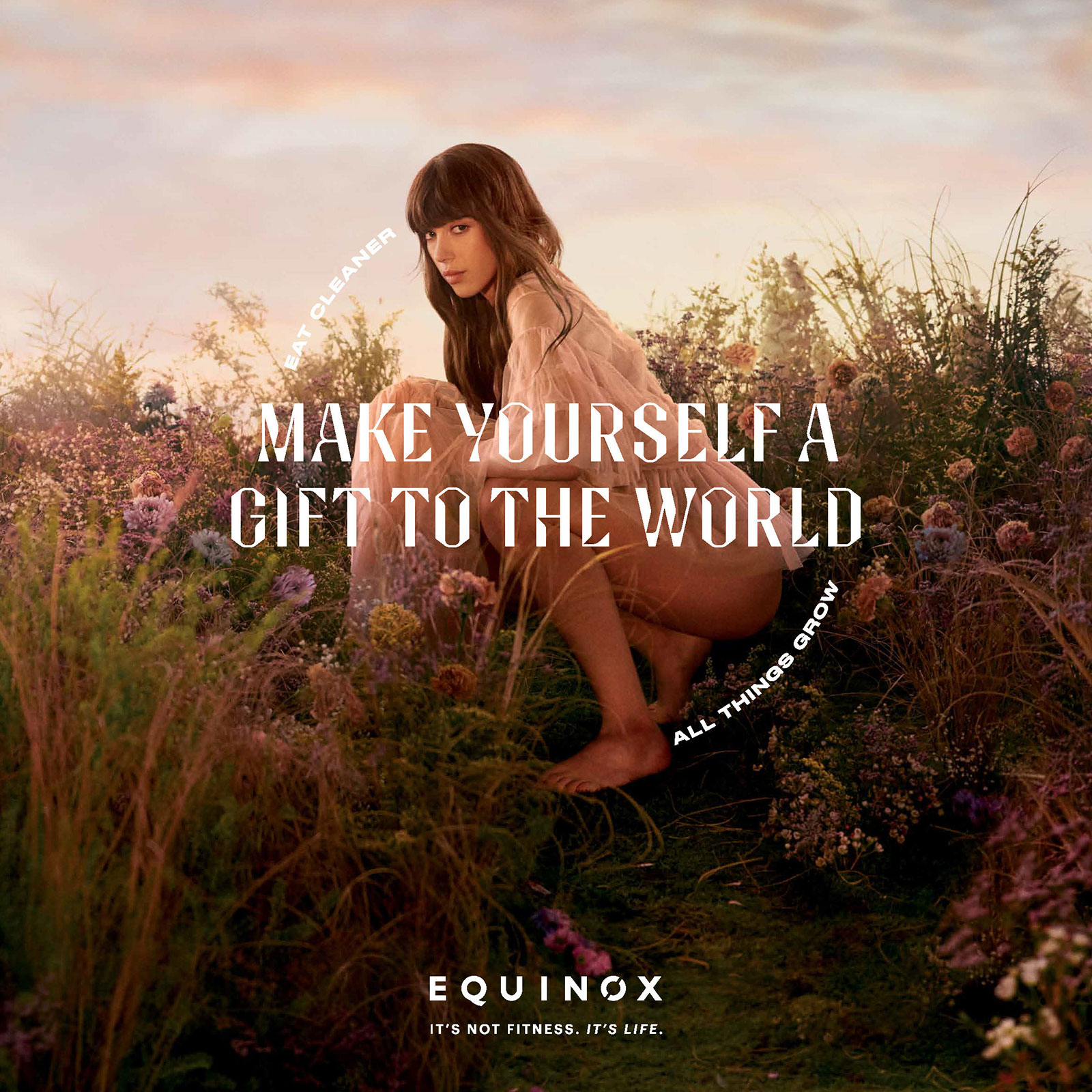 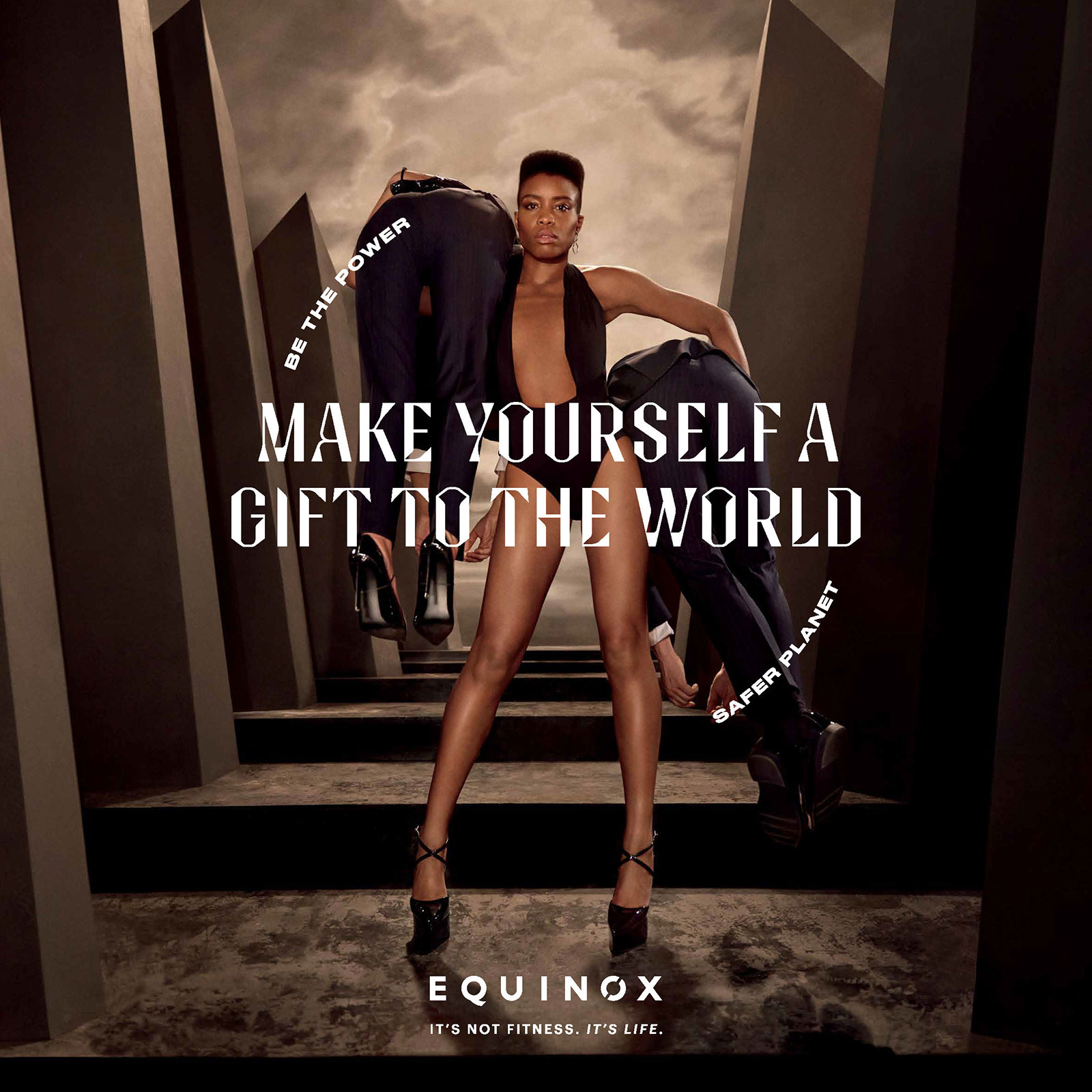 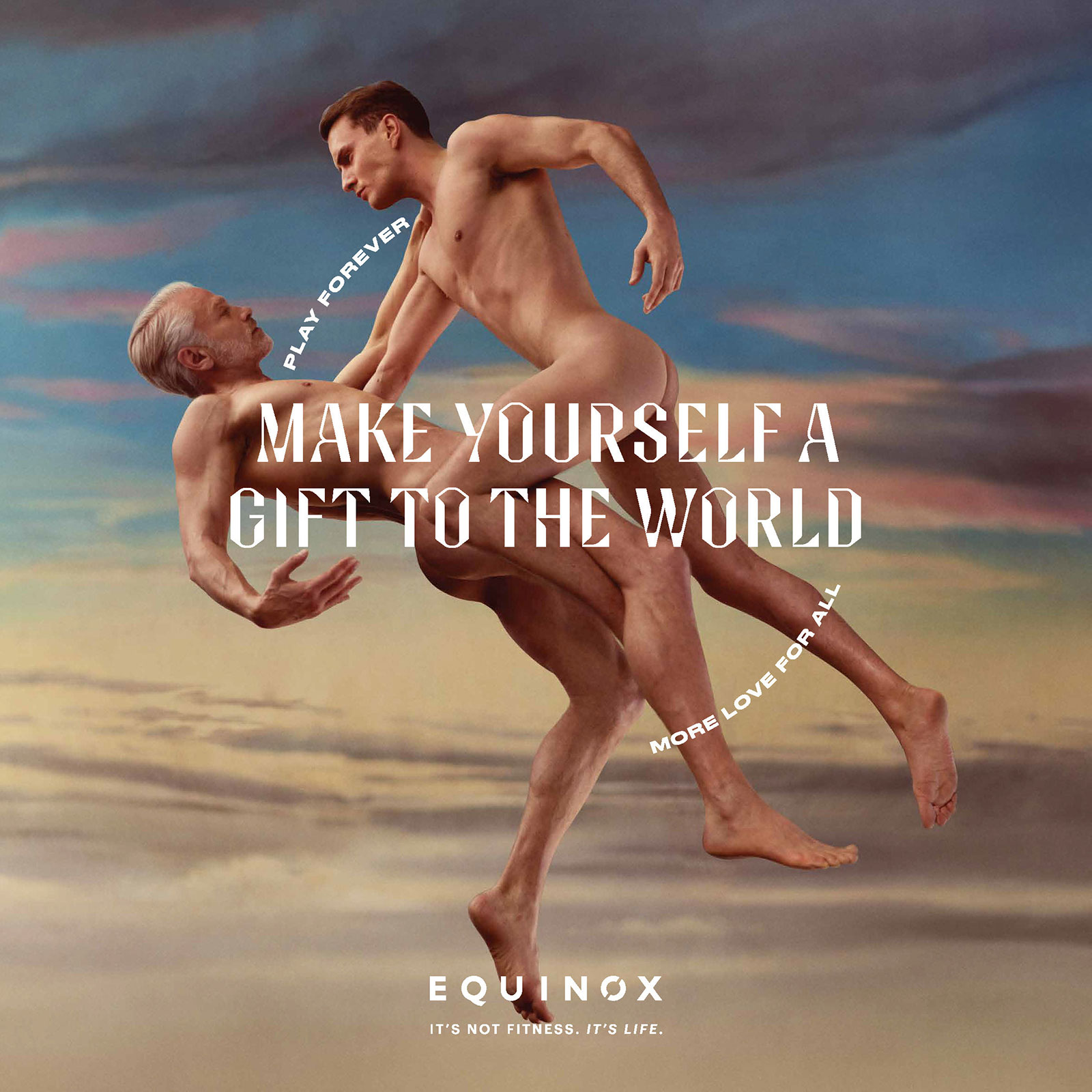 Those nude dudes embody "the idea that if you work on yourself, you become fitter and healthier and you have more physical love to give," says Droga5 senior creative Sam McCluskey. "We looked to capture the spirit of infinite love between the two protagonists."

As for the coffin, "if you live this big, uncompromised, rich life, you will touch more lives in the process—and so we started to imagine how that would lead to an amazing funeral with tons of people from all walks of life in attendance," McCluskey says.

It looks like he croaked happily, anyway, even if it was on a treadmill.

In the print ads, photographer Glen Luchford's slant is potentially polarizing, yet playful. Really, that coffin's more unexpected than upsetting. Meanwhile, Floria Sigismondi, famed for directing the 2010 film The Runaways and videos for artists such as David Bowie and Katy Perry, takes a feather-light filmic approach in the spot, allowing deeper meanings to bubble up through the layers of silliness and beefcake.

Equinox has long taken chances with its ads. Last year, the marketer unveiled a frenetic music video based on the confluence of love, water, spirit, movement and light. In 2018, the brand introduced a "Commitment Collection" of oddball items, such as lipstick made from newspaper pages and cologne infused with DNA from a marathon runner. Ads from 2017 were especially striking. Some featured artist and cancer survivor Samantha Paige, who displayed her double mastectomy scars.

In a way, this year's work feels more accessible than some of those past forays. Despite the campy approach, there's real muscle behind the message. After all, loving oneself is a key step toward personal improvement—which can expand one's perspective and improve relationships. That surely is a gift to be savored.

"We're challenging our audience to commit to becoming the best version of themselves through self-devotion, and in so doing, become a better person, better friend, better partner," Solomons says.

Breaking today, the campaign rolls out in North America and the U.K.

Music
“Do You?” by TroyBoi