Returning the holiday to its roots in U.S. workers 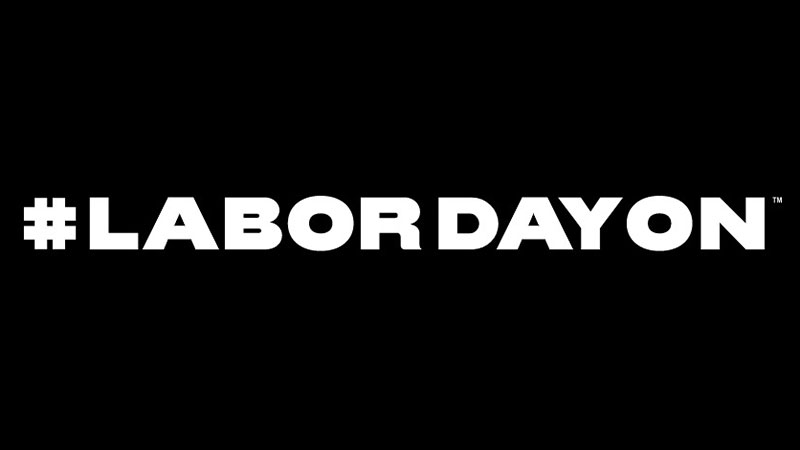 Hey, big brands, some 25 million Americans are receiving unemployment benefits as the coronavirus pandemic drags on. So, wouldn't it be a humane, helpful gesture—and smart PR—to advertise open positions at your companies instead of sales or special offers on your marketing channels for Labor Day?

On Sept. 7, Red Wing, a 115-year-old brand renowned for making work boots used across industry and manufacturing, will engage its platforms to promote jobs available at the company, rather than hype any sales or discounts. It also developed the video below, which lets users click and apply to its openings nationwide.

What's more, Red Wing converted its customer service phone bank into a jobs hotline, and remodeled more than 500 stores into employment centers catering to those with experience in construction, manufacturing, energy, transportation and other skilled trades: 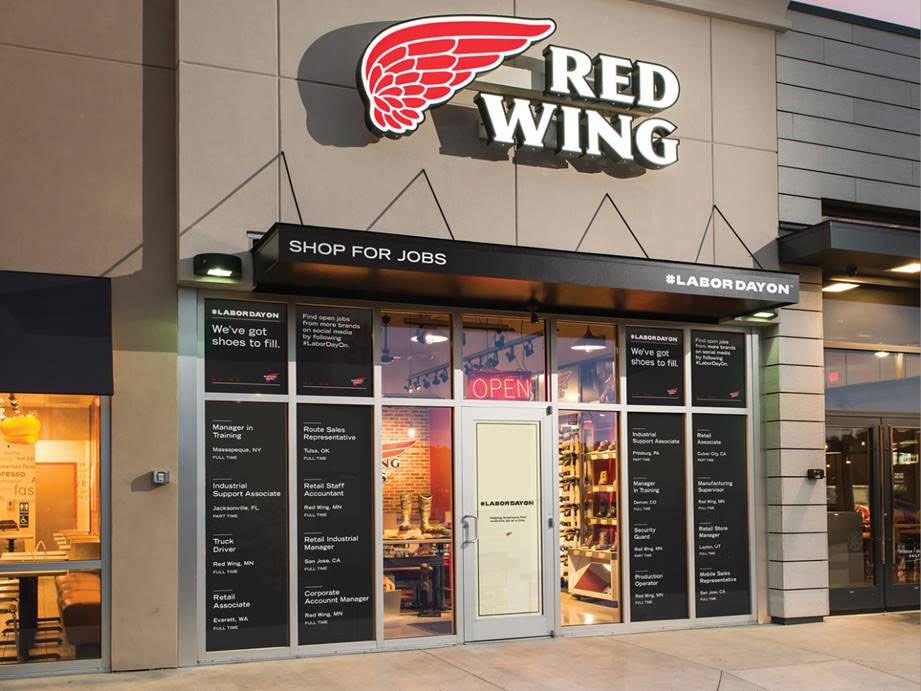 The brand ran this ad in The New York Times, challenging other companies to emphasize jobs over sales on Labor Day: 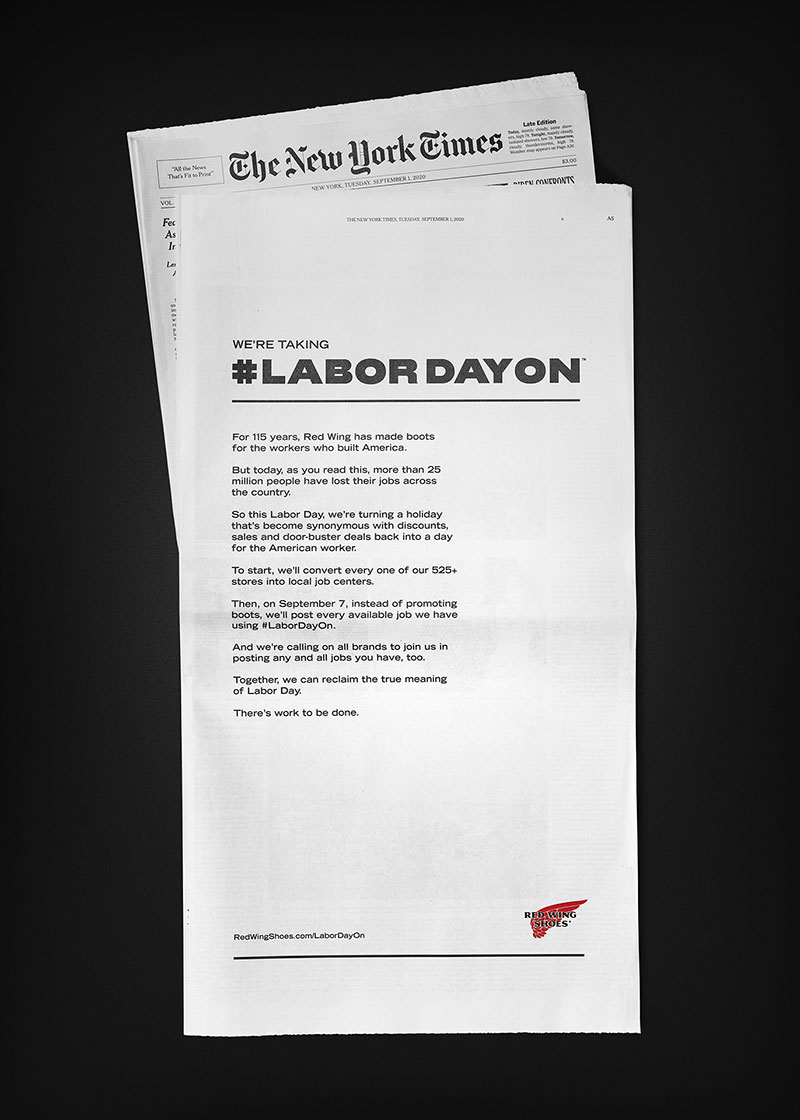 "Our clients at Red Wing came to us with big ambitions to do something that was culturally relevant and purpose-driven," Droga5 creative director Dustin Tomes tells Muse. "They've made boots for the American worker for over a century and felt that doing something on Labor Day—a holiday meant to celebrate workers—could be powerful."

The team based the campaign on the disconnect between the origins of the holiday and what it's come to represent in today's culture.

"What used to be a celebration of the social and economic achievements of the American worker is now synonymous with the end of summer, the start of school, a weekend of door-buster deals—and, for most, a day off. Unless, of course, you don't have a job," Tomes says.

Of course, in the Covid hellscape of 2020, layoffs and furloughs have run roughshod. "So, we thought, what if we reclaimed the meaning of Labor Day and made it about the American worker again?" says Tomes. "What if, instead of taking a day off, we went to work for the millions of unemployed Americans? What if, instead of promoting sales and discounts, we promoted jobs?"

He adds: "There were too many unemployed Americans to make a meaningful impact all by ourselves. We knew we had to call on all brands, big and small, to join us."

Naturally, adding high-profile partners would boost the buzz value of #LaborDayOn. But Red Wing and Droga5—the former having furloughed many employees itself during the crisis, while the latter suffered layoffs in recent days—never lost sight of the serious social pain underpinning the initiative. (Red Wing says it has hired back most of its workers and hopes to reinstate the rest in short order.)

"Red Wing knows all too well the agony 2020 has wrought as they battle bottom lines to stay in business while doing everything in their power to protect the workers they hold dear," Tomes says. "Yes, they would benefit from a weekend of good sales, but that's not what our country needs right now. What it needs, what we all need, is to focus on the individual."

To keep things simple, the video isn't geo-targeted or updated in real-time. Instead, it cycles through all available Red Wing positions.

"We felt it was more powerful to put every opening we had on display instead of being too clever with it," says agency creative director Jono Paull. "If someone has a friend or family member out of work in another city, and they see this film, we didn't want them to miss out on a job opportunity that could help someone they care about just because of their location."

As for BK and the other partners, "each brand has committed to posting any and all job opportunities they have within their respective organization using the hashtag #LaborDayOn," says Paul. (To what extent and how visibly remains to be seen.)

"By joining hands and using our collective social, marketing and retail channels to promote job possibilities, it's our hope that we can reclaim the essence of what Labor Day is really about and support the workers of this country when they need it most," Paul says. "Though we have a foundation of 50-plus brands committed, we hope that any brand, organization or person who hears about the initiative joins in any way they can. And even if they themselves are not hiring, we hope they'll post the listings of others."