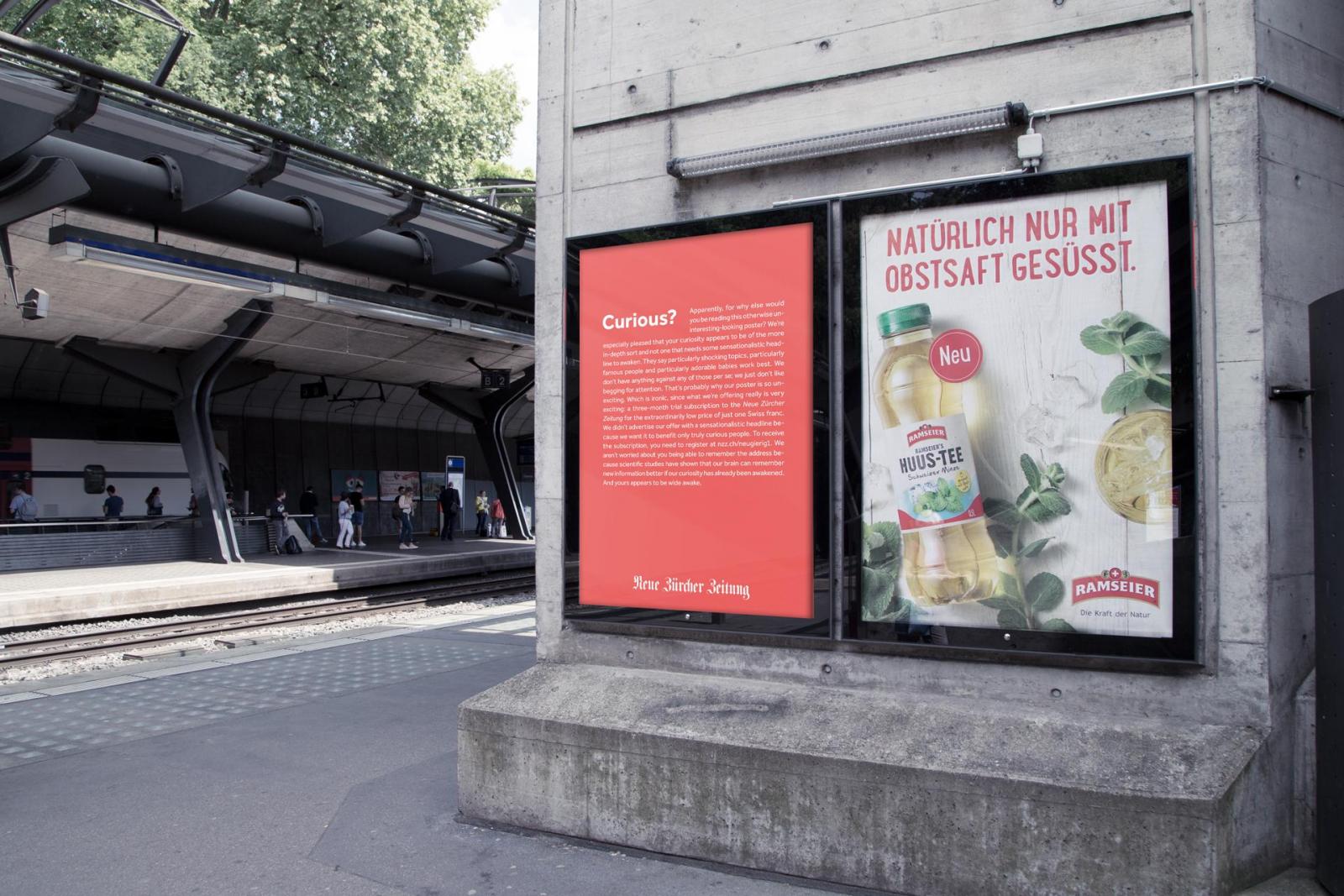 The writing's on the wall

Who says print is dead? Not the copywriters at Scholz & Friends.

For Switzerland-based German language newspaper Neue Zürcher Zeitung, the team conceived a series of outdoor ads with nothing but a bogglingly huge block of copy against a salmon background.

It's work that breaks the rules of modern advertising—namely, that it's best to keep copy to a minimum series of legible paragraphs (if any are merited at all) and avoid printing huge swathes of white text against a colored background (hard to read).

But inverted conventions may well be how Zeitung draws the people it wants.

One ad, titled "Curious?" (see it in situ above) reads, "They say particularly shocking topics, particularly famous people and particularly adorable babies work best. We don't have anything against any of those per se; we just don't like begging for attention. That's probably why our poster is so unexciting." 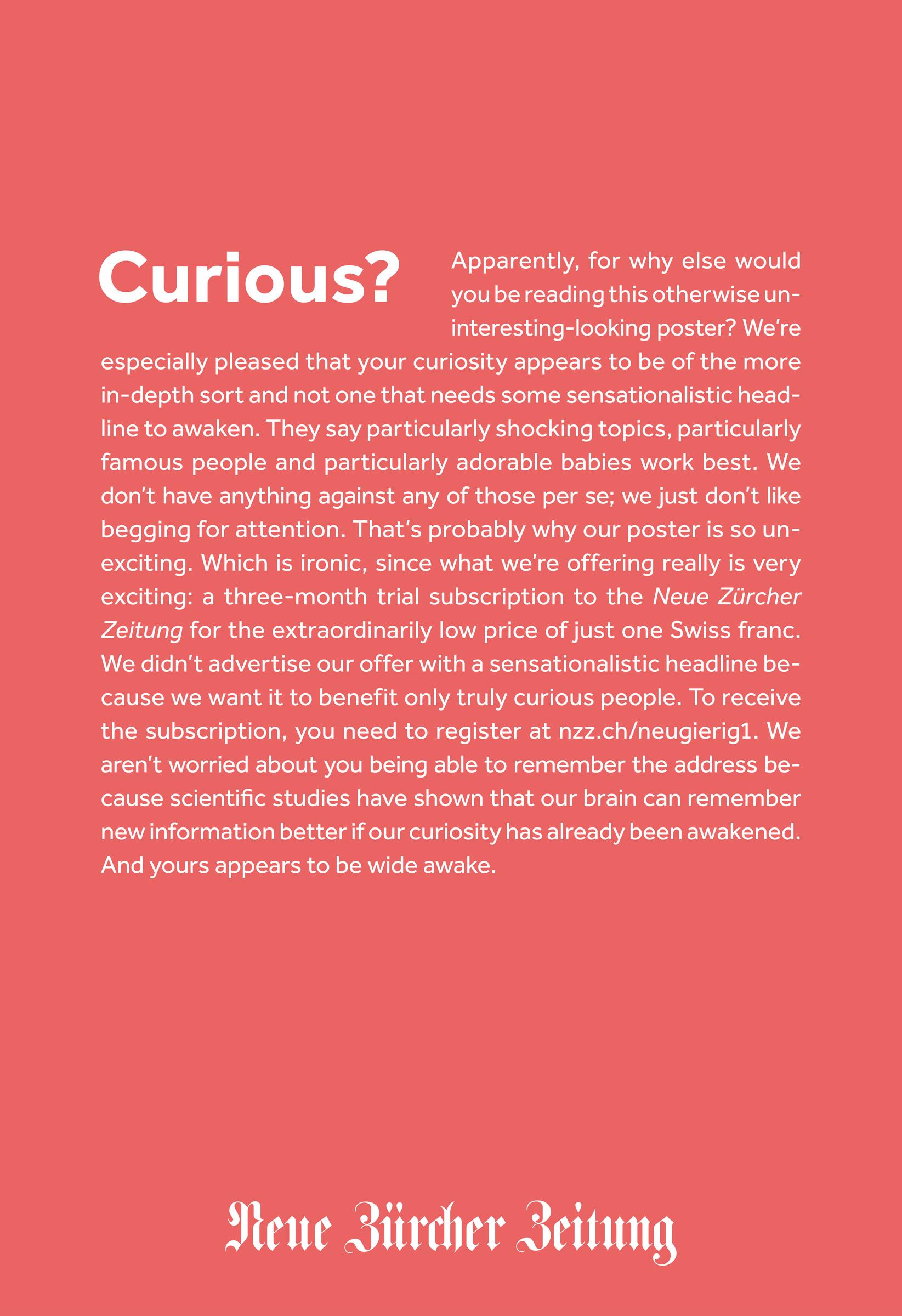 The ads promote a three-month trial subscription for a single Swiss franc, which people can redeem by registering at nzz.ch/neugierig1—yet another convention broken. Who asks people to manually type in a URL, never mind one that complicated?

"We aren't worried about you being able to remember the address because scientific studies have shown that our brain can remember new information better if our curiosity has already been awakened," the "Curious?" ad defends smugly. "And yours appears to be wide awake."

Next up, "Boredom" cites the common proverb that only dumb people experience boredom, then refutes it. "After all, boredom is the result of not being sufficiently challenged, which in itself presupposes a certain mental ambition," it reads. "Thus, boredom is really sort of beautiful: It makes us think and urges us into action. You, for instance, have decided to take a look at your surroundings and read our poster." 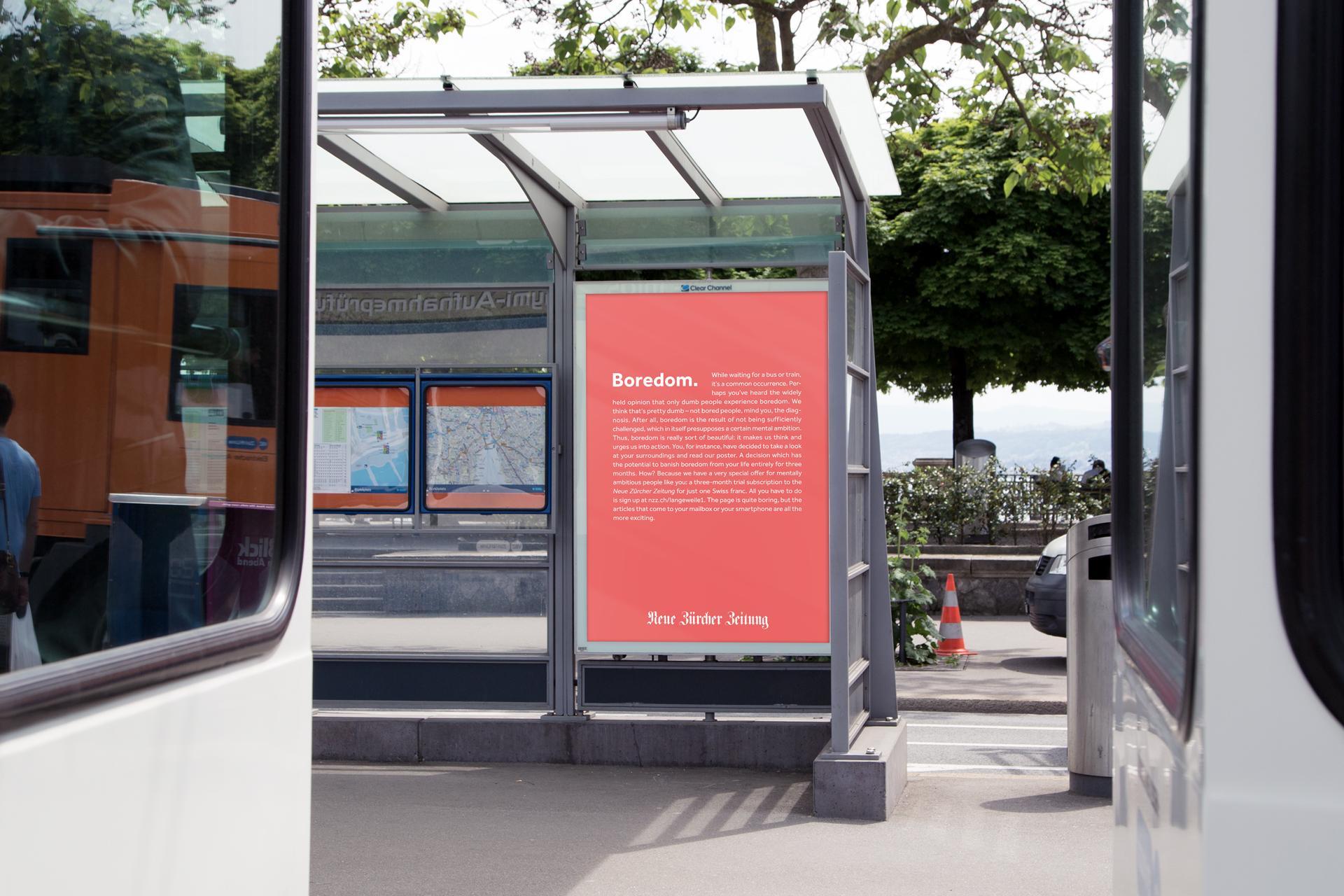 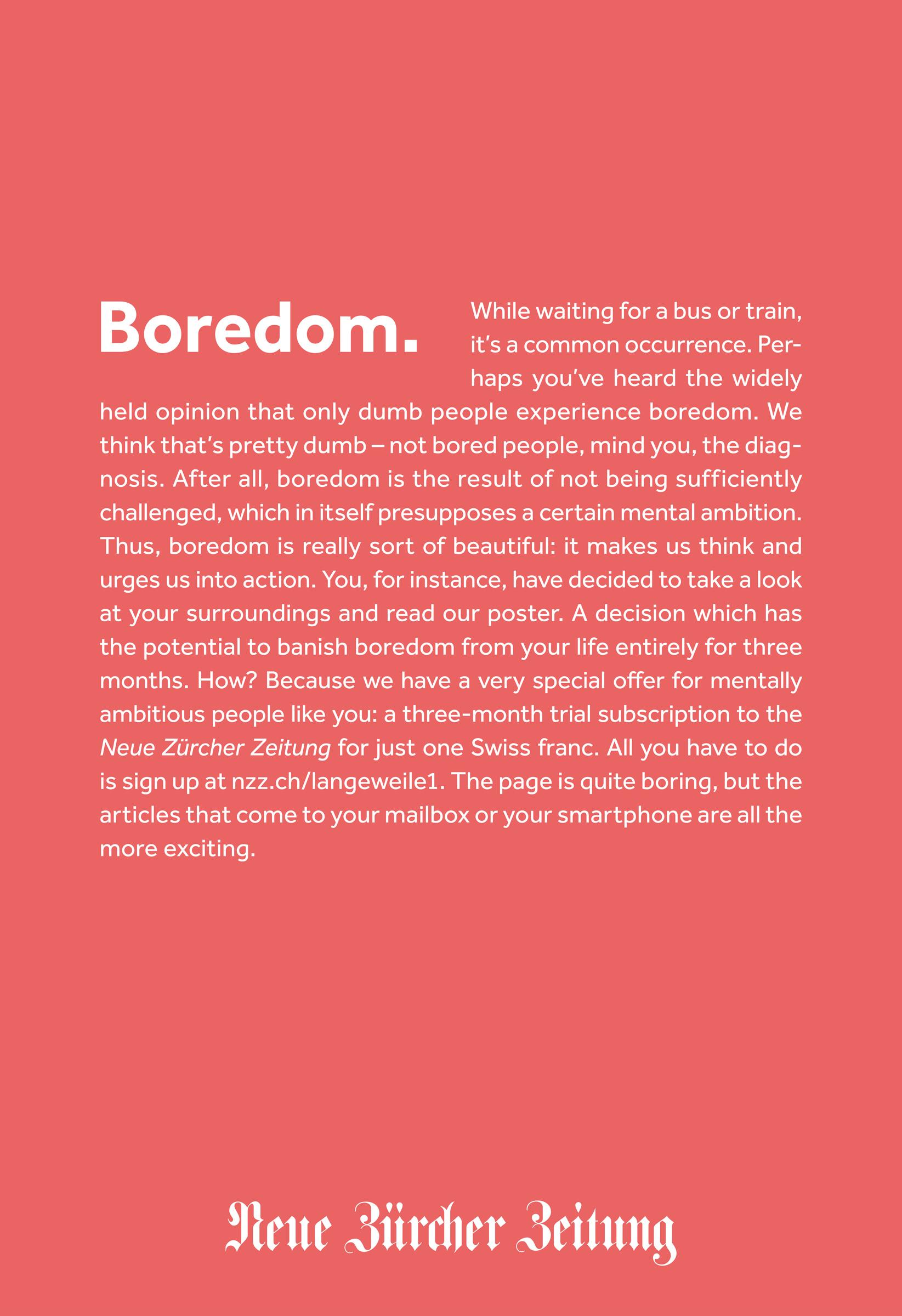 Finally, "Aha" takes issue with the belief that people can't pay attention to something long enough to read text this massive; the fact that anyone at all is reading suggests otherwise. 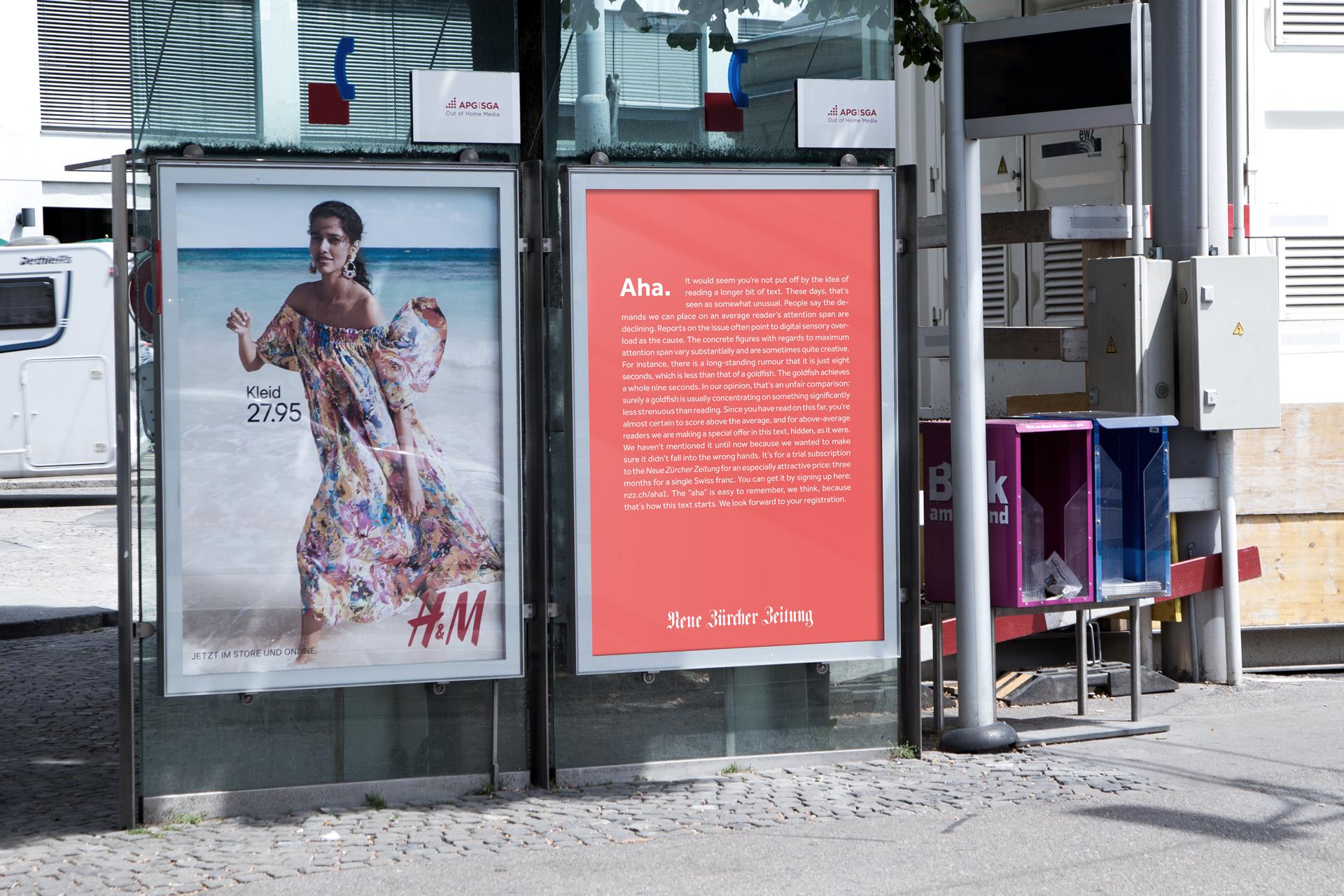 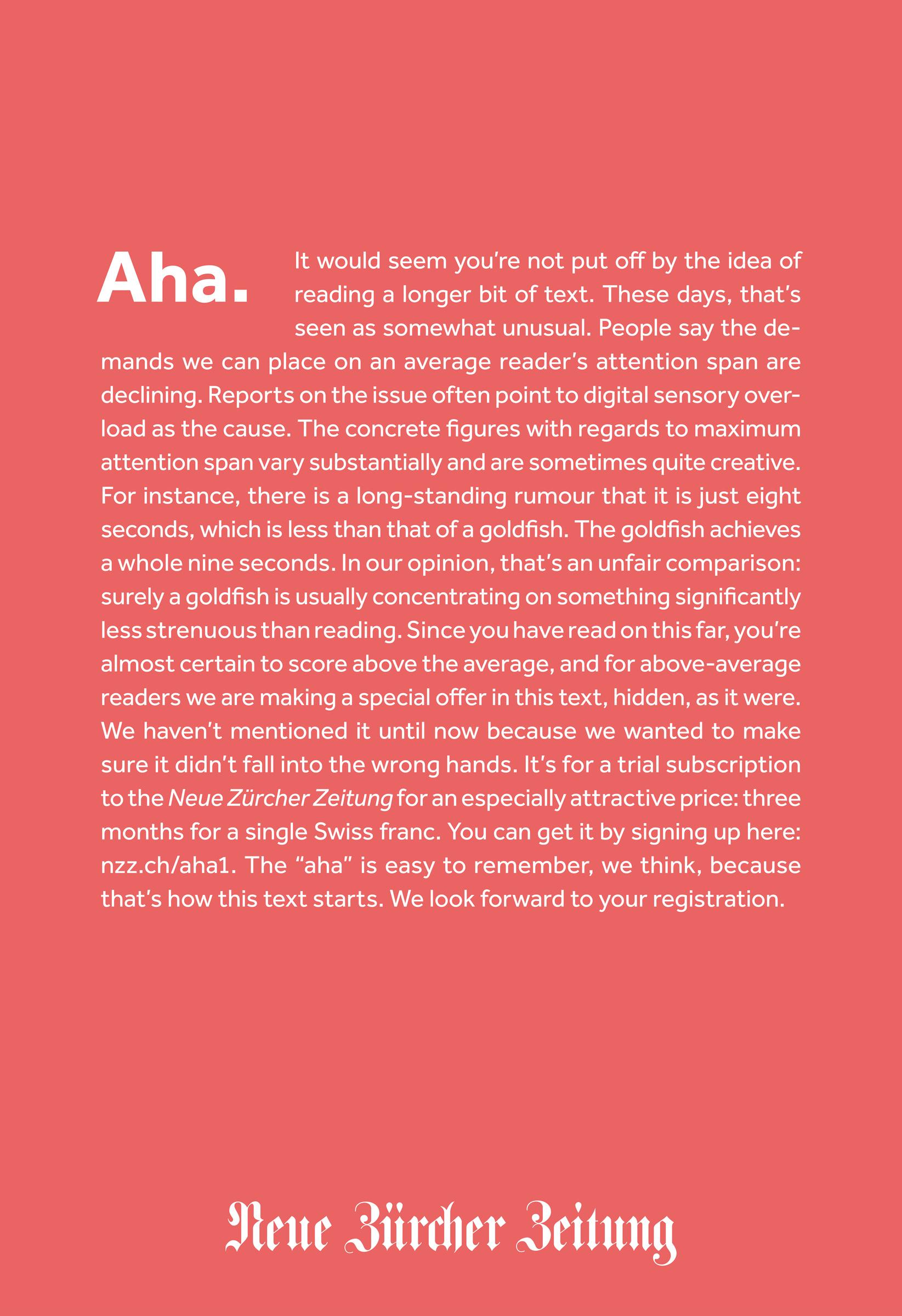 "The concrete figures with regards to maximum attention span vary substantially and are sometimes quite creative," it reflects. "For instance, there is a long-standing rumour that it is just eight seconds, which is less than that of a goldfish. The goldfish achieves a whole nine seconds. In our opinion, that's an unfair comparison: surely a goldfish is usually concentrating on something significantly less strenuous than reading."

Each makes a social observation, refutes it while working in a compliment to the reader, and cultivates the sense that your efforts place you among an elite, which merits an elite reward—a one-franc subscription for three months.

It's pretty elegant mind-hacking, especially since the very people Neue Zürcher Zeitung is going for are actual readers. It also reinforces many of the tried, true rules of advertising we've perhaps forgotten in more pressing times.

Whatever conventions may appear broken on the surface, reading these ads would probably make David Ogilvy beam with pride.

CREDITS
Credits clearly matter to you, so in the spirit of Scholz & Friends, we'll share them in the form of an unreasonably long, but hopefully pleasing and educational, paragraph. The agency is located in a place you've likely already guessed, because you're intuitive: Zürich, Switzerland, the great capital of finance and banking. But did you also know the city predates the Romans, and that its modern name is an evolved mispronunciation of Turicum? (Latin was hard, even before it was dead.) In the aforementioned city, working hard at ads like this, you'll find creative director/copywriter Christian Vosshagen, art director Luca Stancheris and copywriter Maira Weidmann… whose own site (not so playfully) contemplates the creation of a religion in her own name.