'The Meat Is Meaty.' Wendy's Made Its New Ad From a Kid's Cartoon 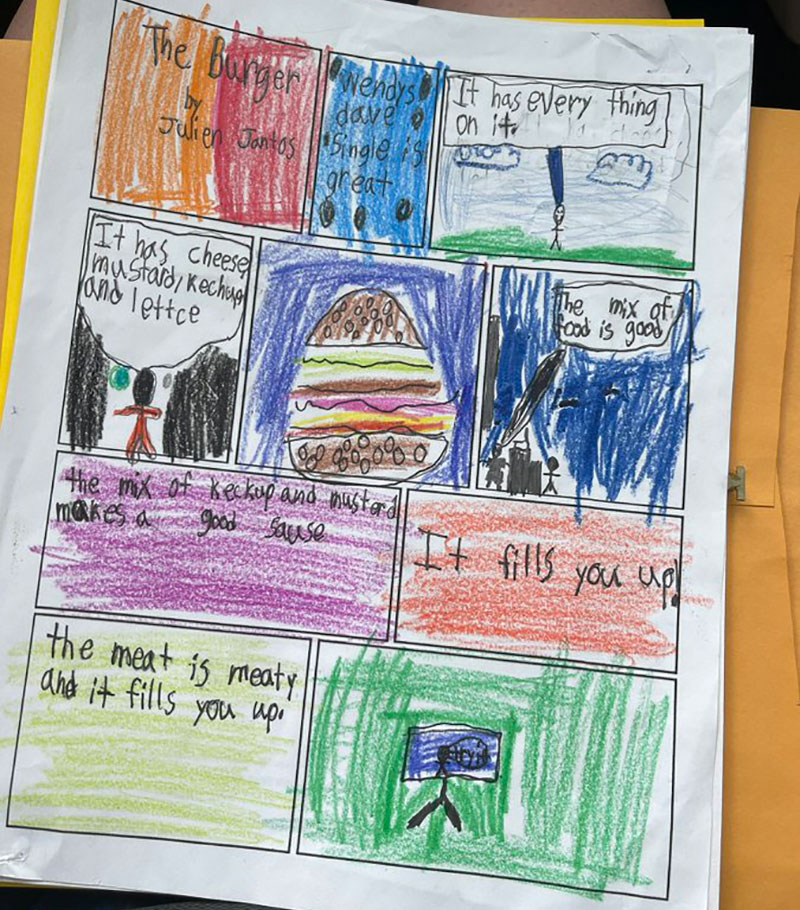 The agency's new Wendy's ad was "written and directed" by Julien Jantos, whose mom Megan posted his initial sketches on Twitter. "Free @Wendys ad written by their biggest fan (aka my son)," Megan wrote.

The VMLY&R team saw the tweet at 1:30 p.m. CST on Friday and sprang into action. Remarkably, their finished spot—using stock footage to bring Julien's storyboards to life—rolled out on Twitter around 8 p.m., just six and a half hours later, as a reply to Megan's original tweet.

Jeremy Cline, manager of strategy and insights at VMLY&R, tells Muse that the team immediately starting kicking around ideas in a group chat after seeing Megan's tweet. "The group chat quickly evolved into a full-blown edit over a video conference, where we found clips that fit Julien's original creative vision for the spot and we even scored the music ourselves in an apartment living room," he says.

The spot was done in a few hours, but it took a little more time to sign off with legal. "It turns out that stick figures and stock footage have very different licensing requirements," says Cline. "However, the team and our client came together to have the spot posted by about 8 p.m. CST, including the sourcing of stock footage, scoring of original music, and, of course, approval from his mom."

Wendy's CMO Carl Loredo said discovering Julien's cartoon and turning it into a spot "was the highlight of our week. Clearly, he is wise beyond his years and has excellent taste—so we wanted to celebrate that in a uniquely Wendy's way."

Loredo added: "Wendy's loves nothing more than interacting with our biggest fans and this video reflects how we show up for our customers by engaging and listening every day. It's why our fans know they can count on us to be the most responsive brand on Twitter, in the restaurant and anywhere, anyway they want to connect with us."

It was certainly an impressive turnaround for a Friday afternoon.

"Working on Julien's spot was fun and playful, making us all feel like kids again," says Cline. "It was a great reminder why we got into a creative industry in the first place, and a great reminder of how fun it should be to make ads. Even if it meant working late on a Friday."