McCann Made 40,000 Toy Soldiers Based on Real Wounded Veterans

This fighting force needs your help

Generations of boys and girls have played with toy soldiers. For decades, the tiny green fighting figures were advertised on the back pages of comic books. Available in sets of 100 or more for a few dollars, these warriors were "made of durable plastic," and often shipped out in a military-style foot-locker storage box. Tanks, jeeps, bombers, battleships and even howitzers were included.

Now, McCann London and U.K. charity Help for Heroes have mustered a special unit of 40,000 small figures that resemble toy soldiers. Made from 100 percent recycled plastic, they're not on active duty, nor intended as children's playthings.

The finely detailed models, each about 1.5 inches tall, are based on real-life wounded veterans. Dressed in civilian attire, some are missing limbs or use prosthetics, while others ride in wheelchairs. 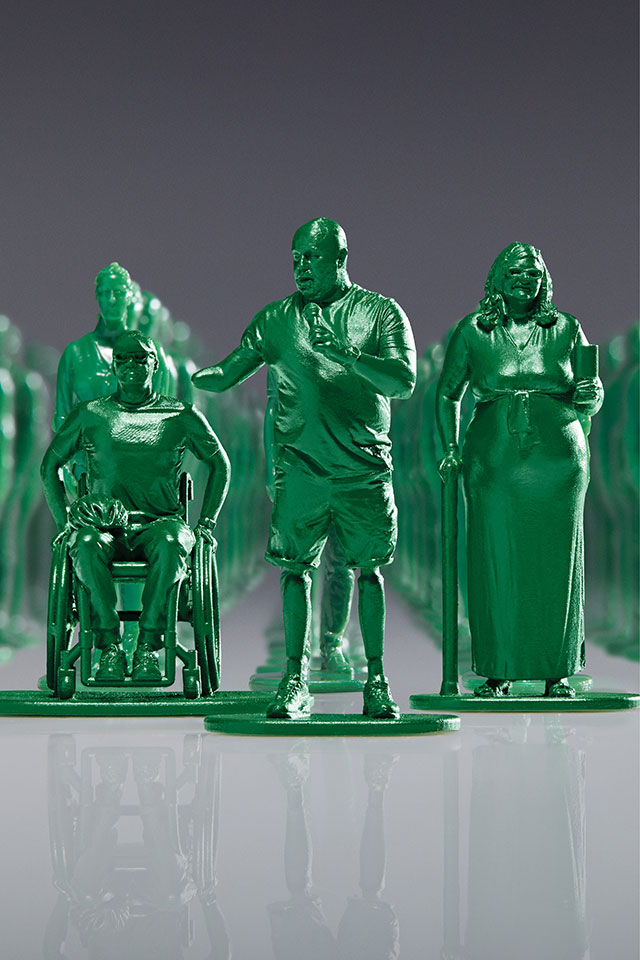 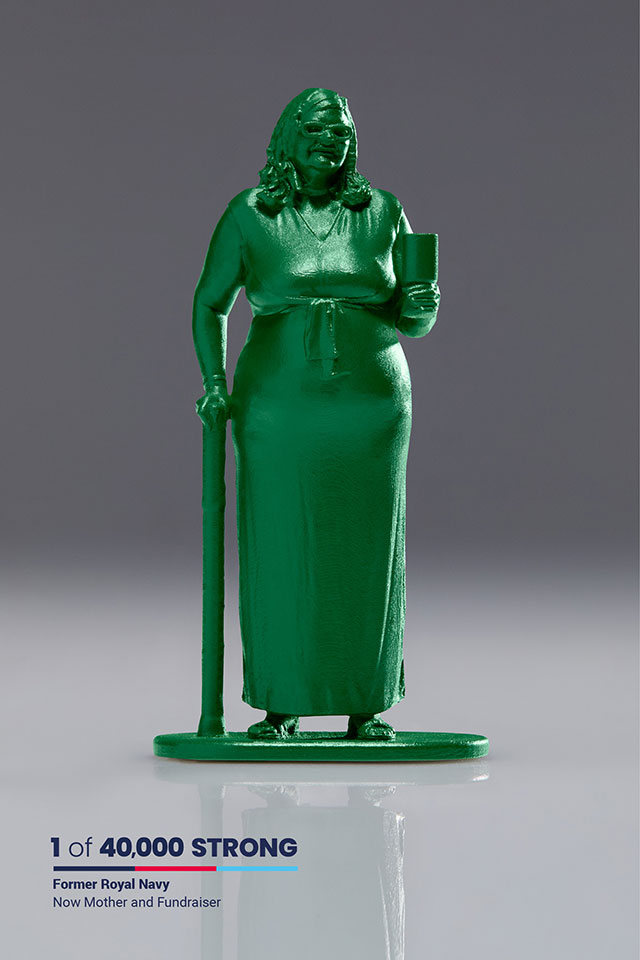 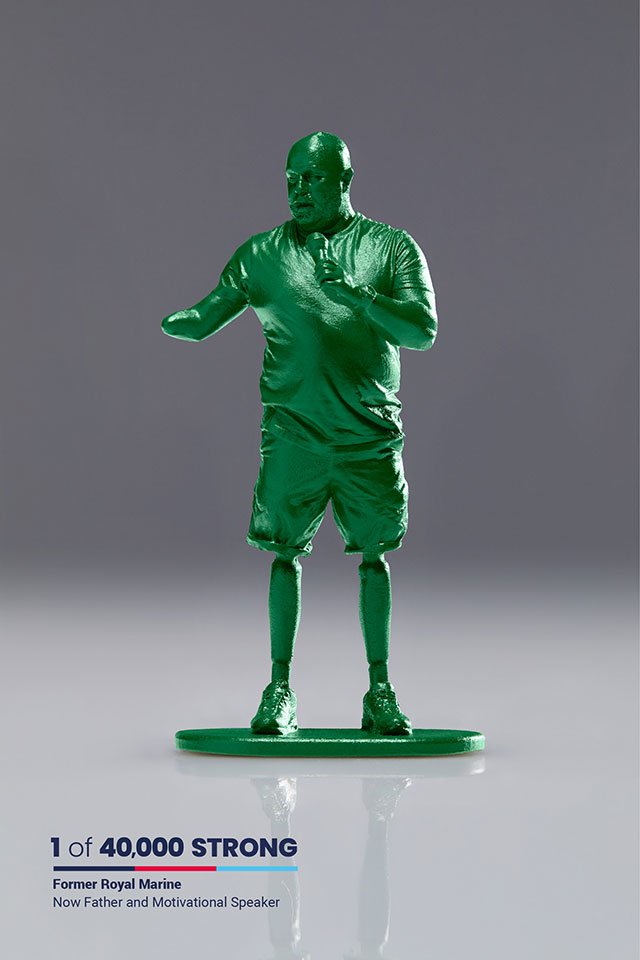 On display this week at Arndale Centre in Manchester, U.K., "40,000 Strong" was produced in collaboration with Facebook as part of Campaign magazine's Hack 50 initiative encouraging British agencies to create mobile charity initiatives.

The exhibition illustrates a sobering statistic: Over the past 20 years, 40,000 people have left the British military owing to injuries, and many of them struggle mightily to transition back into civilian life. According to video below, that means, potentially, "40,000 lives derailed. 40,000 families affected. Every day the number grows."

"When set down, as a force, the 40,000 cover an area of approximately 12 by 5 meters, almost a third of a tennis court," McCann director of copy Mike Oughton tells Muse of the small figurines. "To create the designs, we worked with well-known movie industry VFX company 4D Max to 3-D scan real-life veterans."

Along with boosting public awareness of the gaps in support for wounded veterans, the project raises funds by selling each figure in the exhibition for a suggested £5 donation. 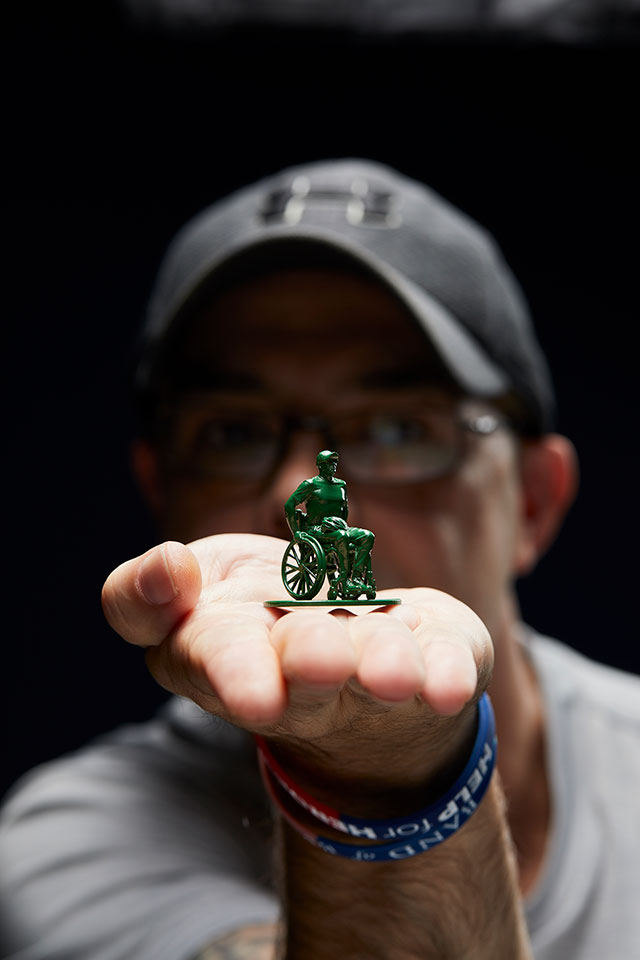 "We thought that, if we could present this huge amount of people physically in an eye-catching and thought-provoking way, it would move the public, just as it had us," Oughton says. "So we chose the classic toy-soldier motif and built an army—not of gun-toting soldiers, but of highly trained individuals" eager to work and help others.

Most of the "40,000 Strong" stemmed from nine bespoke designs, he says, "which are injection moulded figures, just like regular toy soldiers. Thirty percent of them are female and 70 percent male, reflecting the gender split of wounded U.K. veterans."

He adds: "It was also really important to be able to celebrate the positive stories of those veterans who Help for Heroes have supported on the road to making a positive impact on society. So, a smaller amount were produced on a 3-D printer in designs based on seven real-life vets with inspiring stories to tell."

These include Carl Shadrake, who was critically injured twice in Afghanistan, while his brother died in combat, and Paula Knott, who left the Royal Air Force with a leg injury, enduring years of physical and emotional pain.

"I'd try and hide behind laughter, but inside I felt so empty, a burden to my family," Knott says. "I reached the point where I considered taking my own life every day."

Thanks to Help for Heroes, both are making strides. Now a leading fundraiser for the organization, Knott also competes in archery and other sports through the Invictus Games. Shadrake, who works in the film and TV industry, has acted and choreographed scenes in Game of Throes and Kingsmen. 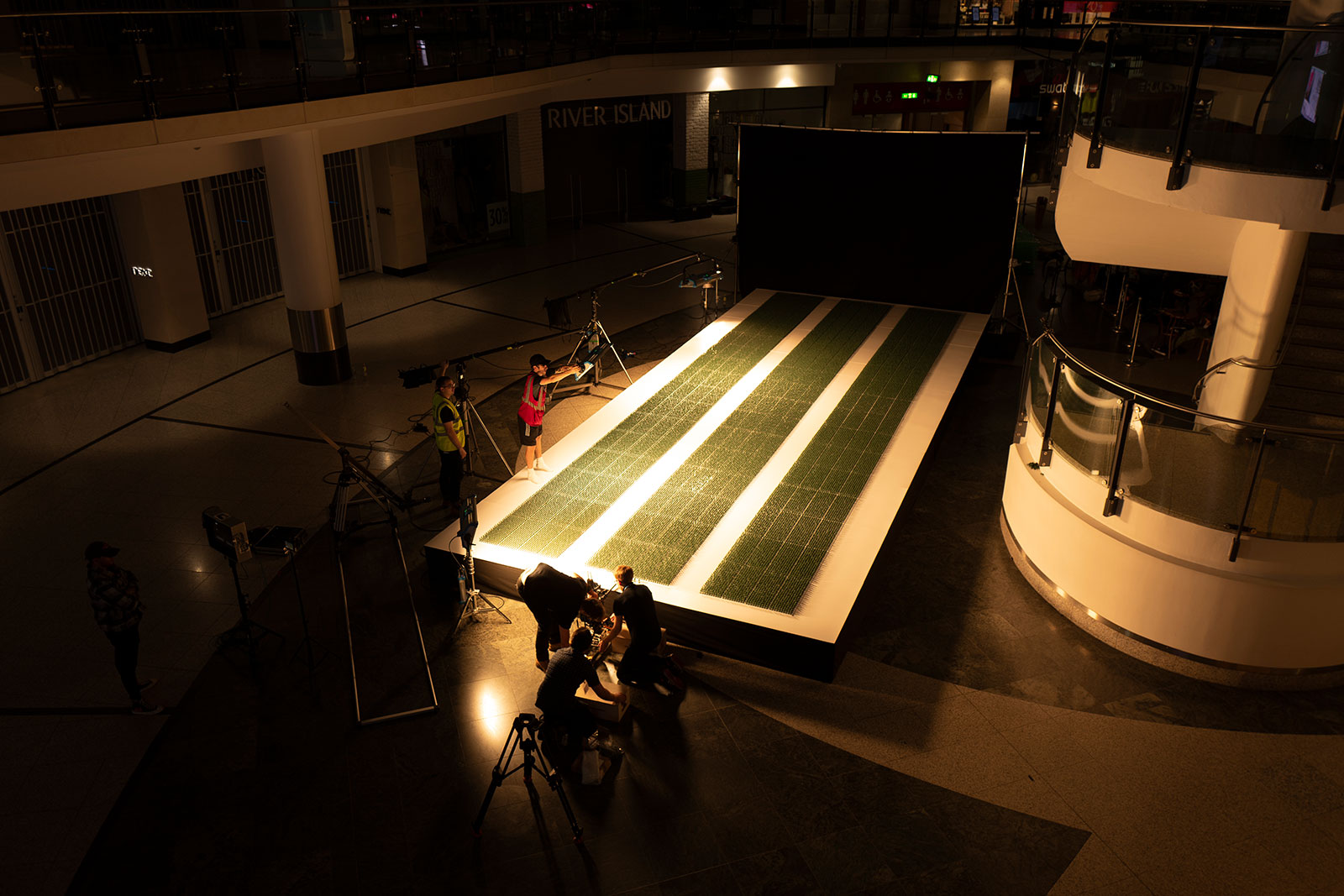 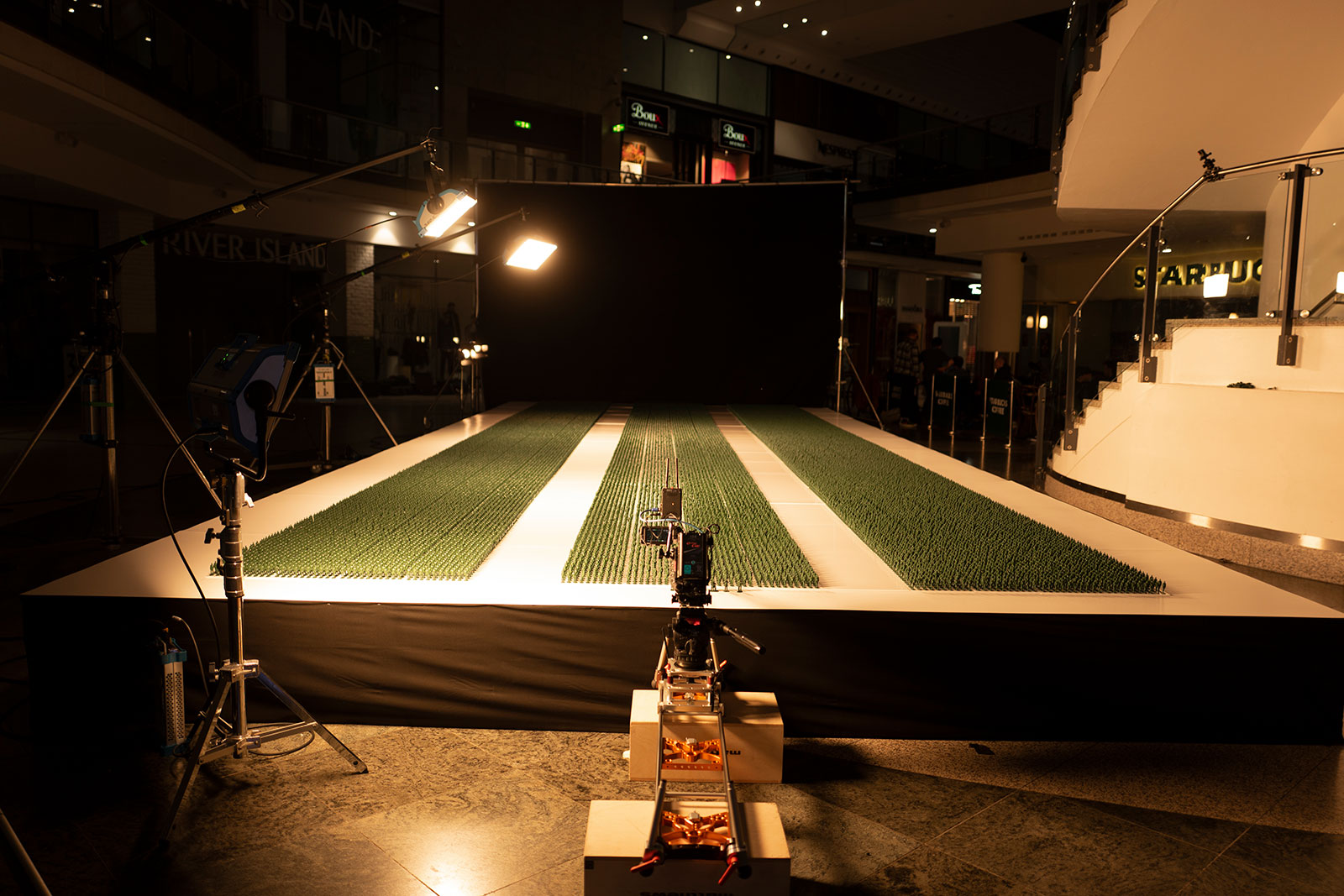 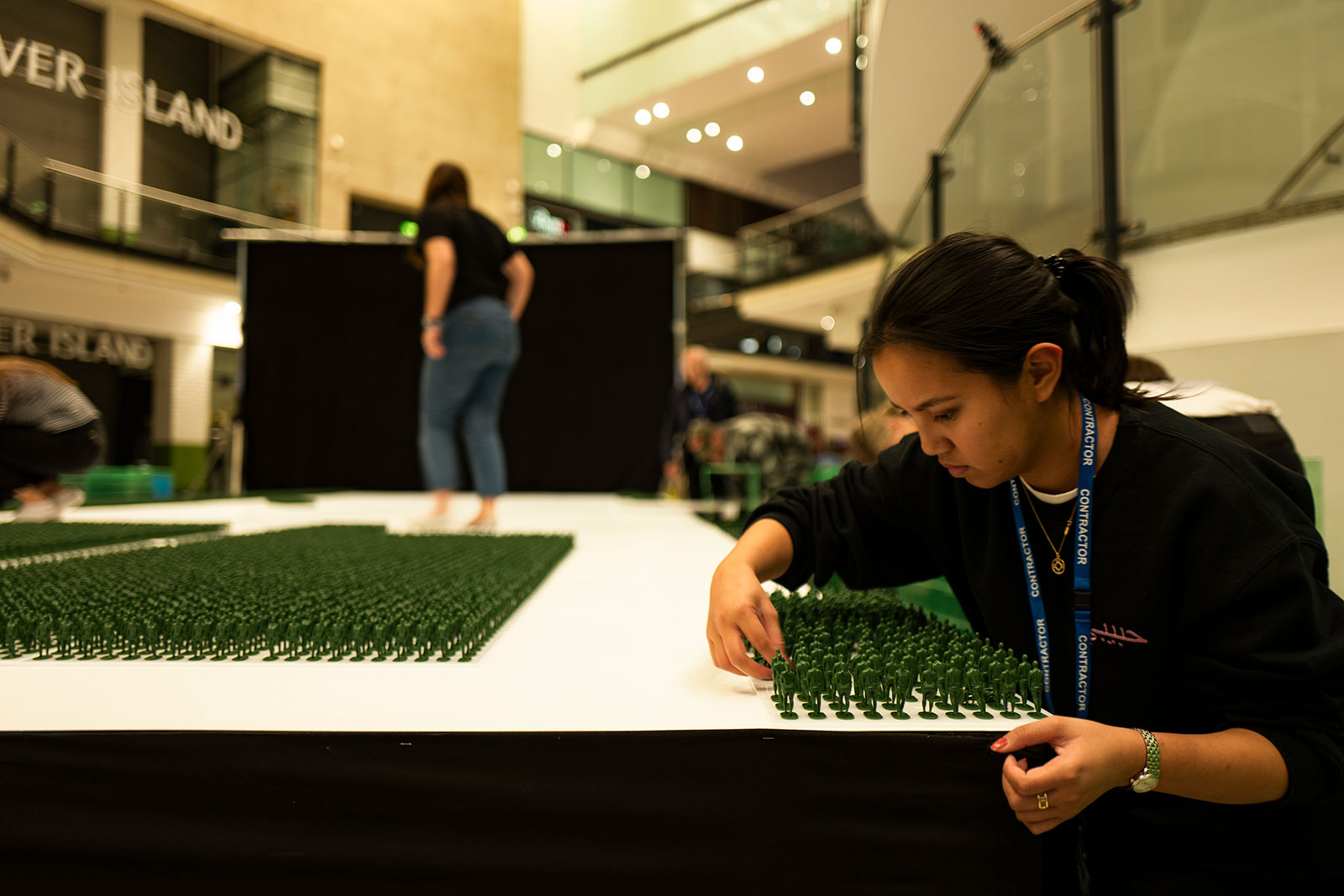 Then there's Dave Watson, who lost both of his legs and right arm to a land mine. These days, he's an in-demand motivational speaker, so his figure is shown holding a microphone, as if addressing a packed auditorium.

Toy soldiers have long trivialized warfare and turned life-and-death struggles into the stuff of games. It seems fitting to flip such imagery on its head to help those who served and suffered in real life.

Fitting, and somewhat sad—though Outgton stresses that the project ultimately strives "to show more than just the scale of need, but the huge scale of potential. To inspire the public to think that, if we can help the 40,000 stand strong, what a massive positive impact on society they could have."