They fired him years ago for such antics 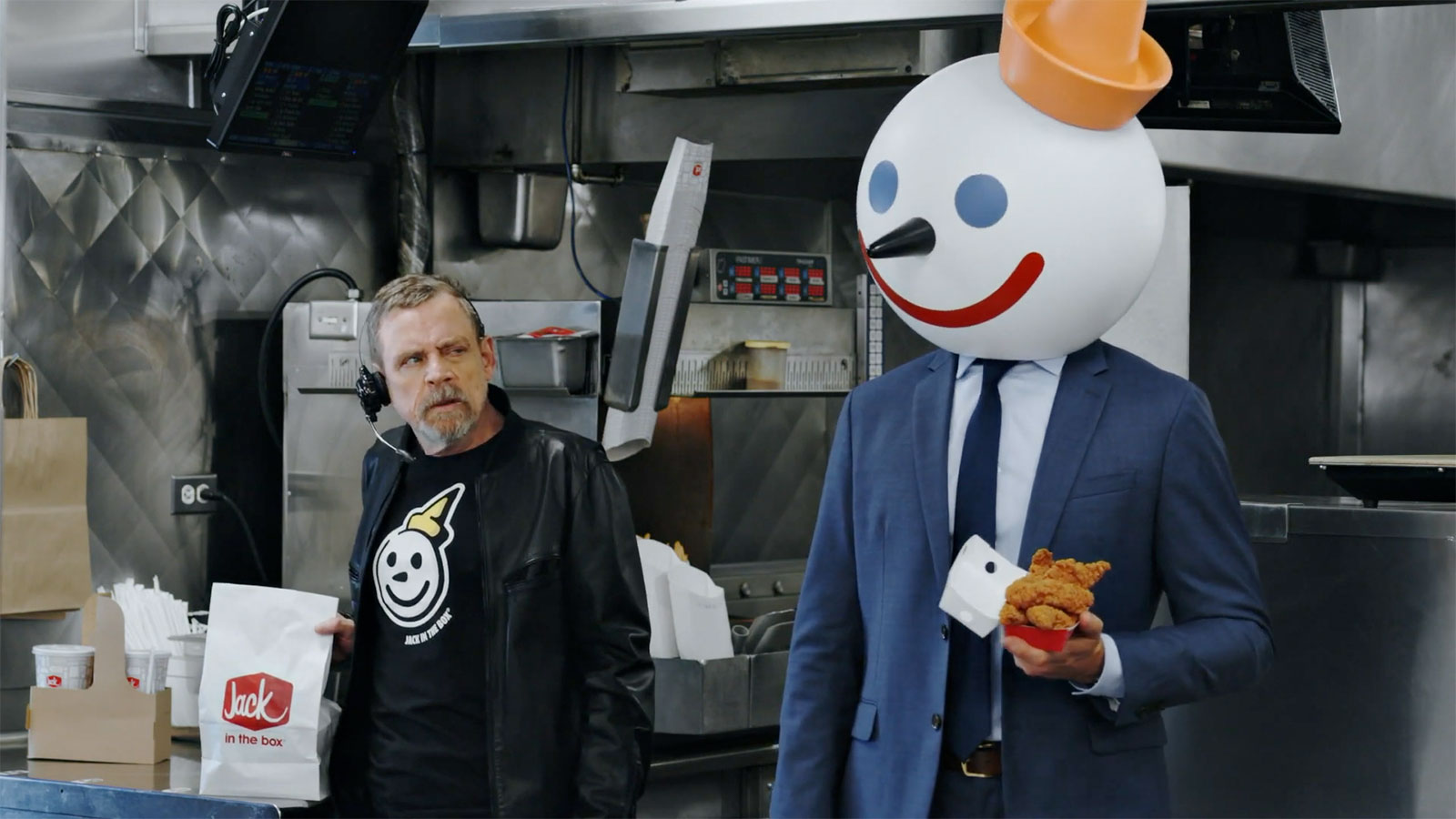 A long time ago, before finding galactic fame as Luke Skywalker, teenage Mark Hamill worked at Jack in the Box. Alas, he got canned for impersonating a clown over the drive-thru mic.

Now, the Jedi returns to the fast feeder in a fun campaign from TBWA\Chiat\Day Los Angeles promoting Jack's Spicy Chicken Strips and French Toast Sticks. The stunt below stars professional actors who knew they were filming a commercial, but had no idea Mark would be filling their orders.

Mark Hamill Works the Jack in the Box Drive Thru

The Force is strong in this one! It's a compelling ride, especially when the folks behind the wheel tell Mark how much they love his movies. A young woman exclaims, "I have grown up with you!" and we feel the pure joy of fandom. Mark's "let's do a selfie!" response seems heartfelt, too.

"We were looking for a way to make a limited-time offer campaign special and breakthrough when the team came across a clip of Mark on The Late Late Show telling the story of how he was once fired from a Jack in the Box for impersonating a clown in the drive-thru," TBWA\C\D creative director Jeff O'Keefe tells Muse. "The idea of bringing Mark back along with a couple of other fan favorites was born."

"The commercials involved a lot of improv and trying out different lines and bits to see what worked," Hamill says. "That's catnip for a performer. This was a really collaborative bunch and we just had a lot of fun."

Ham's used to hanging with dudes in weird headgear. At least Jack's not his father. We think.

The pair also show up in a comic book, which drops across social this week, with a print addition planned:

Below, the TBWA\C\D creative team takes us behind the scenes:

MUSE: Was it an easy sell to get Mark aboard? Did he jump at it, or need convincing?

Bert Marissen, creative director: Mark was quite excited about it from the start. You can imagine that he's been hit up countless times by brands looking to leverage a famous sci-fi franchise. This, instead, was an authentic way for him to do a campaign that drew from his life. To hear him explain it, he has only fond memories of his time at Jack in the Box, even though he got canned.

Where was the shoot? Can you walk us through the process?

Jeff O'Keefe: The drive-thru stunt was filmed at an L.A.-area Jack in the Box one day in early July. We put Mark in the window for a couple of hours and had him get up to some of the mischief that got him in trouble his first time out—greeting people in a crazy clown voice. Mark, of course, is just as beloved by fans for his voice acting work, so he had a great time.

How much did the actors know beforehand?

Marissen: During the audition process, they were asked about TV and movie franchises they loved, which allowed us to highlight some potential fans of Mark's work. They had no idea they were going to meet Mark—all they knew was that they had to pull up to the menu and order a few items. This allowed us to get reactions that didn't have to be faked. The trick with stunts like this is to not get people to act. You want it to be genuine. So, you have to give them just the right amount of information.

Things got a tad emotional at times.

O'Keefe: We captured that wonderful moment of people realizing who Mark was, and then let them find their own conversational groove. It was cool seeing Mark genuinely connect with fans—he just lit up.

Did scripting or coaching come into play?

O'Keefe: We occasionally tossed out topics for them to try out—Mark explaining his history with Jack in the Box, Mark indulging in old-movie set stories, etc. A lot of the people wanted to call their moms, which was funny, something that didn't make it into our film. Mark ad-libbed everything but his final exchange with the manager.