A Man Is Haunted by His Wild Teenage Self in This Fun, Poignant Mercedes Film

Reminding us to stay 'Forever Young'

So, you're rolling along in life, mired in your safe, comfortable, white-collar existence, when suddenly—vrooooom!—your 16-year-old self drives in from nowhere and shows you what a stodgy conformist you've become.

Don't you hate when that happens?

Mercedes-Benz posits such a wild ride a new five-minute film, titled "Forever Young," part of the carmaker's "Play by Your Rules" campaign. Though understandably put off at first, our story's thirtysomethibng protagonist quickly bonds with his younger version. As it turns out, the two have much to learn from each other.

Some of the kid's observations and asides are priceless:

"So, what happened was, I was in algebra class, listening to my teacher droning on, and hoping, 'Ugh, God, I hope I'm not as lame as him when I'm his age,' and then—boom, here I am!"

"Frowning on anything cool seems to be a thing around here."

Aw, come on, give your older self a break! Here in 2019, you work hard for a living, and life eventually runs everyone down, at least a little. Besides, you look like the drummer from Hanson, so chill.

In the end, past and present come to terms during a breezy, badass neon-lit night ride in Mercedes' new CLA Coupé, propelled by the the Jesus & Mary Chain's full-throttle rocker "Just Like Honey," leaving the dude's older version in a better place than he began.

Go ahead, man, ask out that co-worker with the concert tickets. Don't get old before your time. Play by your own rules!

"We wanted to make the car part of a bigger human truth, something people would relate to," says Alice Bottaro, creative director at Mercedes' lead European agency antoni_garage, which created the film with director François Rousselet. "Our protagonist, Rob, is caught in a loop of job and routine, and without noticing has given up most of the things that used to bring him joy—like playing an instrument, or having a relationship, or going for a ride just for fun. Most people in their 30s are familiar with this conflict, and of course, we are no exception. The drumming nostalgia, for example, was inspired by one of our ECDs."

The CLA is considered the "rebel" of the Mercedes-Benz range, Bottaro says. "This gave us the opportunity to approach a younger audience and use it as a way to engage with people who aren't yet familiar with the Mercedes universe."

Of course, there's nothing truly new here. The younger-self trope is tried and true. It's even informed car commercials before, with Aerosmith's Steven Tyler time-tripping backwards in a 2018 Super Bowl spot.

Still, Mercedes-Benz's approach feels spot on. While focused, the story gets plenty of room to roam, and the CLA excels as a vehicle of self-discovery.

"We wanted to entertain by creating a story around the car," says Bottaro. "The aim was to make the CLA feel like a natural element, integrating the car features seamlessly into the flow of the story, and making the car play an active role in the narrative. We wanted to tell a story about a car that not only brings you from A to B, but brings back a particular feeling, too."

The teen's parting shot, "Switch?", and his snap! return to algebra class at an ironic moment in the story are especially inspired.

"For that final sequence, we wanted to capture the reactions of the teenager, so he had to be in the car with the precision driver doing his stunts," says Bottaro. "You could hear his screams of joy resonating throughout the whole Miami harbor" as the scenes was filmed.

Director Rousselet, acclaimed for his work with pop stars Kanye West, Madonna and Pharrell Williams, crafts a seductive music-video ambiance during the climactic driving scenes. His palette pulses with excitement and expectation.

Mercedes-Benz captures that effect both in moody, Tokyo-shot print ads ... 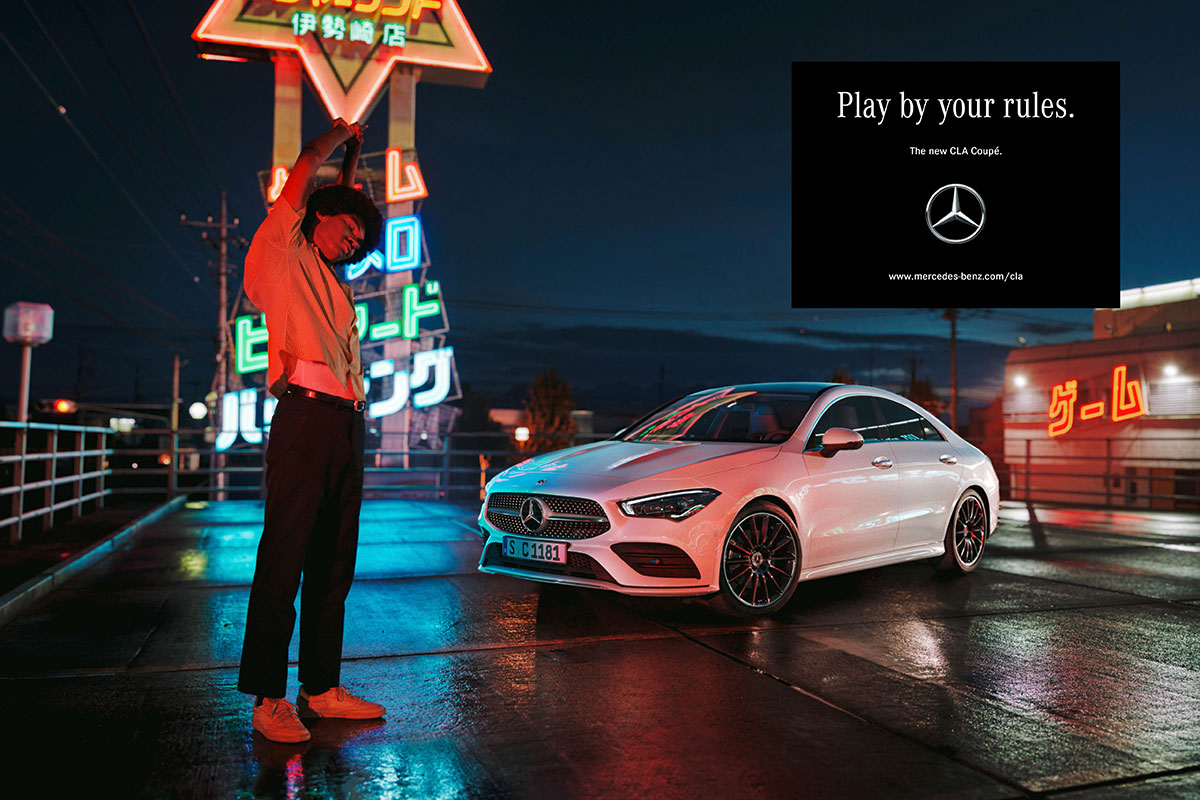 ... and with an AR filter for fans who follow @mercedesbenz on Instagram. (When you blink, it changes hues.)

"The neon and colored lights are an element of our look, something we have been using consistently on all channels," Bottaro says.

"As this campaign was aimed at a younger audience, our digital team thought it might be interesting to push it even further, bringing the look to an Instagram AR filter to engage with people in a new way. One of the creatives, Johanna [Jaskowska], started playing around on a prototype, learning how AR filters work. She started doing her own filters, too, and today she is a global influencer with over 600,000 followers. It was a pretty cool thing to see happen."

So, if you're feeling chained to your cubicle and a tad uninspired, why not give the #PlayByYourRules filter a try? After all, you're only young once.