This Living Legend Is on an Improbable Mission: Getting Kids to Like Soup

Oh, the lengths one supermarket will go to 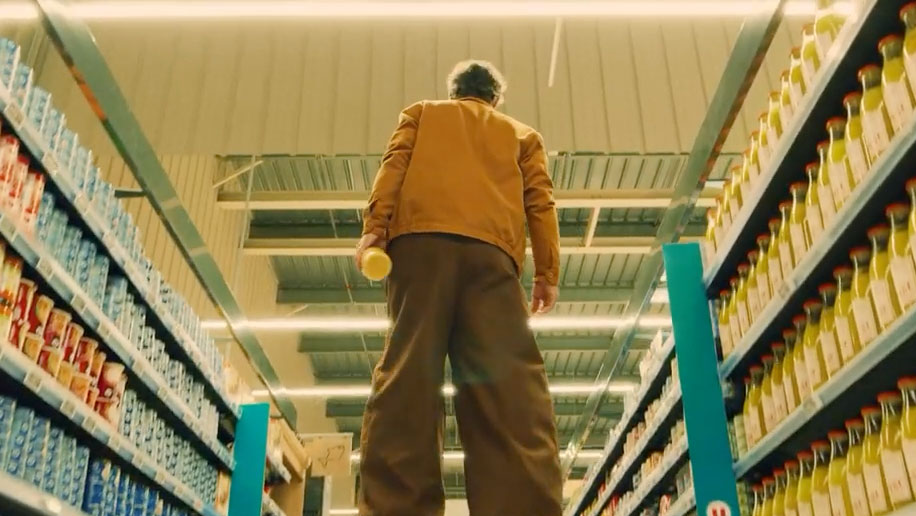 Maybe you remember what it was like to be a kid, and to feel like adulthood was an eternity away. "The Giant," a charming and childlike work for U shops in France, conceived by TBWA\Paris, plays on this idea with its depiction of a giant man in a small town.

The giant in question stands easily three heads taller than the next-nearest man, and children gaze up at him in wonder. "That man is tall," one muses, gawking as he plucks a bottle of soup from the highest supermarket shelf.

"That's because of soup, it makes you grow," her mother says.

Ah, the lies and deceptions of adults!

Children follow him around on his errands, peering into his little house as he reclines his improbably long legs and sips soup by the hearth. The legend—of soup being the reason for his height—grows with him, and the brand he clearly favors flies off the shelves.

We're reminded of Popeye the Sailor Man, and the magical belief that cartoon instilled in us about spinach, which he consumed out of one tough fist, squeezing green leaves out by the canful and into his mouth.

At the end, it's revealed the giant is an average-size U shops merchant on stilts. "Soup seems to be a good business!" he tells a beaming woman, ostensibly Mère Georges, whose name appears on all those provincial soup bottles he's constantly buying.

"Looks like it makes us grow," she quips back.

"The Giant" is a values-based promotion about U shops' relationships with small regional businesses, which, at nearly 3,000 in total, comprise 77 percent of the supermarket chain's suppliers in France. "Here at U, we can never do too much for small local companies," we're told in conclusion. U believes its cooperative local model is key to its success. It also benefits job growth in smaller regions by helping urbanite customers discover more local goods.

The sly but bucolic, fable-like quality of "The Giant" does a nice job of affirming that philosophy, with its depiction of a shop employee taking time to entrance the children of a village that other retailers might consider too small to merit interest.

The work went live June 27, and is accompanied by a national media plan as well as digital promotion. A social push will promote selected U shops partners with national scope.