Kimpton's Room 301 Is an Inhabitable Experiment in Social Connectivity

When a whole room becomes a social experience

There isn't much to a hotel room: A bed, a shower, maybe a mini-bar and a view. Most often, it's merely a snowglobe for sleep before people venture outside for the experiences they actually want.

But Kimpton Hotel & Restaurants hopes to change this with Room 301 in Los Angeles, a hotel room that seeks to explore the "intersections and variances of the human experience." That's a big ask, but Kimpton feels a hotel room may be the perfect place to demonstrate what commonalities we share—no matter where we come from.

Everyday in-room elements are interactive, created to inspire self-reflection or relate to others. Guests who choose to book Room 301, decorated by artist Colette Miller of the Global Angel Wings Project, receive a welcome kit worth $200. They will also be asked to engage in multiple in-room experiences over the course of their stay. 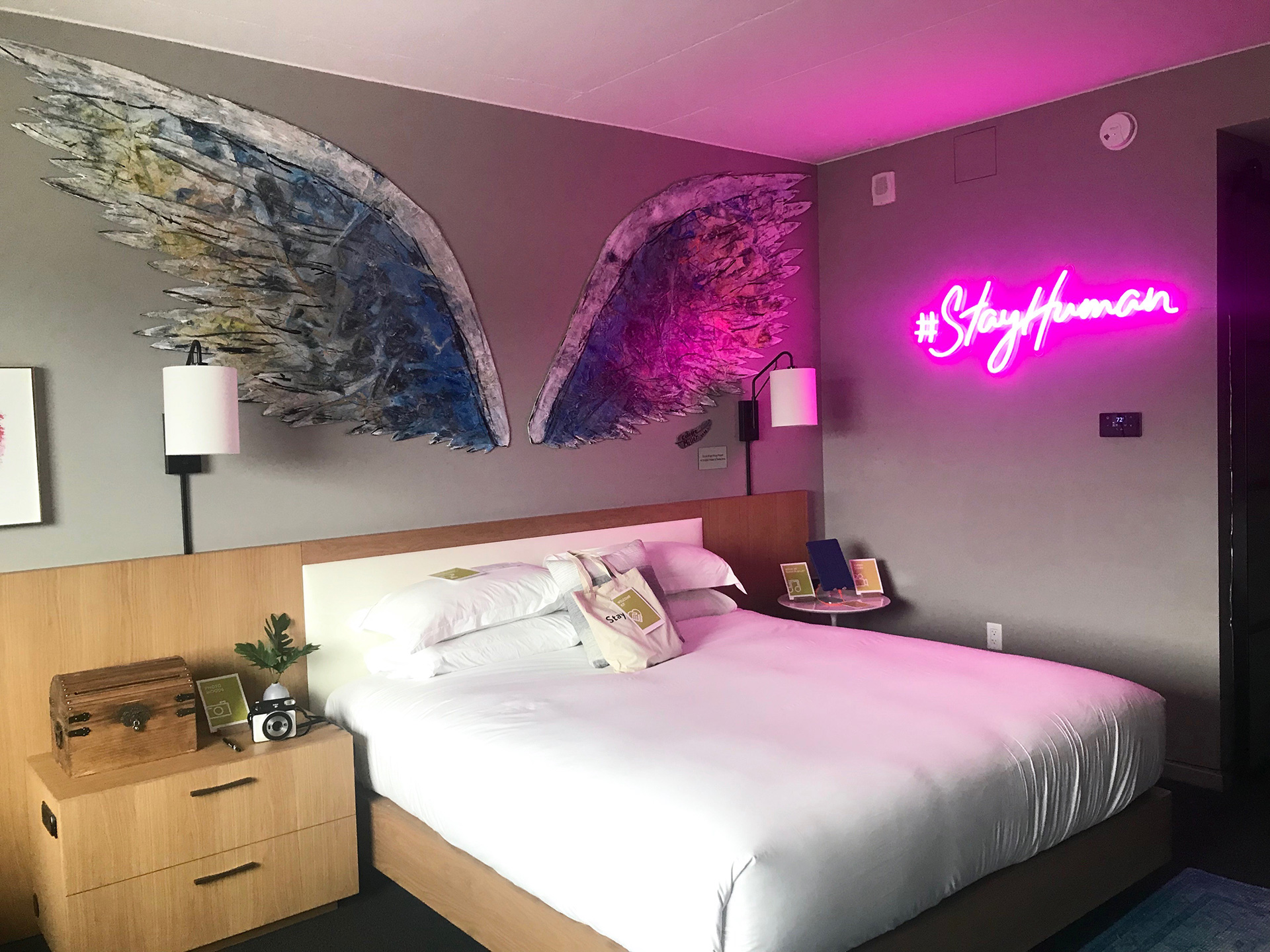 Room 301 will operate for three months at Kimpton's Everly Hotel in Los Angeles, but selected Kimptons throughout the country are also building complementary activations.

At the Kimpton Hotel Monaco Pittsburgh, Kimpton Hotel Allegro in Chicago and Kimpton Hotel Palomar in Philadelphia, postcard-writing stations were mounted to remind people of how they shared travels with others before the social media age. The postcards were designed by local artists; they can be mailed free of charge.

Also in Philadelphia, "Room 6o2" uses plants to plunge visitors into lush green spaces—including orchids suspended over the bathtubs—as temperatures drop outside. Per Hoffman Design's Kevin Maloney, who teaches the Economics of Biophilic Design, human interaction with nature results in a 6 percent lower pulse rate, lower blood pressure and a 15 percent reduction in stress hormone release. Parasympathetic activity—the part of your nervous system that actually lets you relax—rises by 56 percent.

In Oregon, at Kimpton's RiverPlace, Miss You Mondays is composed of a social hour where guests can visit a card station for postcards. Also during social hour, Flight School Fridays lets people make paper planes and battle over whose can fly furthest. Each winner gets a prize. And for Origami Wednesday, learn to fold cranes and other designs, based on findings that origami is shown to have meditative qualities.

At Kimpton's Taconic Hotel in Manchester, Vermont, a community puzzle in the library lets people collaborate in the building of an overall picture. They're encouraged to write a quote about a Manchester experience on the back of their puzzle pieces. The puzzle will be constructed and deconstructed repeatedly.

In Savannah, Georgia, at Kimpton's Brice Hotel, an "inspiration suite" lets people mark where they're from on a big map. It's littered with inspirational books, and a chest for storing what most inspired people on their travels. Those moments will be shared on social channels.

Nashville, Tennessee's Kimpton Aertson Hotel hosts a Living Room activation, where guests use a song to express why they love Nashville. Kimpton will use those contributions to create a social playlist.

The Kimpton Schofield Hotel in Cleveland features lightboxes in guests' rooms, where people can spontaneously leave messages to each other and the room itself. A Good News Wall by the elevators lets staff and visitors pin clippings from newspapers and magazines about good things that have happened in the world (or just stuff they find funny).

She hopes the Room 301 experience will also teach Kimpton about the people actually staying with them. Those insights will be used to further build community at its locations.

Room 301 is available for bookings between Sept. 6 and Nov. 30 at 15 percent off the best flexible rate. For every person who visits, Kimpton will donate $10 to one of its nonprofit partners, The Trevor Project or No Kid Hungry, based on the guest's preference.

At the end of the experiment, Kimpton will share results to spark conversation about the importance of meaningful connections in a fast-paced, increasingly divisive world.