Joan develops the 'Hand-book for Women'

In the 1910s and '20s, Keds produced a series of handbooks for girls. These pamphlets were progressive for the era, urging young women to assert their dawning independence in various ways, such as participating in sports (though domestic skills were also stressed, befitting the tenor of the times).

Now, the sneaker brand has reimagined the concept, joining with agency Joan Creative to launch a print and digital "Hand-book for Women." Themed issues will appear every six months, informing Keds' marketing across in-store signage, e-commerce and social media.

Keds printed 100,000 copies of the booklet to share in stores and through mailings. Influencers will also receive the volumes, along with shoes to try out. A digital version lives online and also serves as a shoppable catalog, with some content shared through other channels.

Joan produced the short video below, also focused on the issue of power for women today, as part of the campaign:

Joan co-founder and creative chief Jaime Robinson describes the project as "part magazine, part look-book, part campaign and part call-to-arms." She notes that since its formation in 1916, "Keds has had a long history of encouraging women to be comfortable and explore the world," and the handbook leverages that heritage to provide useful, inspirational content that transcends traditional advertising.

As for the project's origin, "we went to Keds headquarters in Boston to go through their physical archives, and that is where we discovered their 'Hand-book for Girls,'" Joan creative director Mica Gallino tells Muse. "There we were, holding the original 'Hand-book,' along with the first sneaker they created in 1916. We had the idea to bring this concept into today's world." 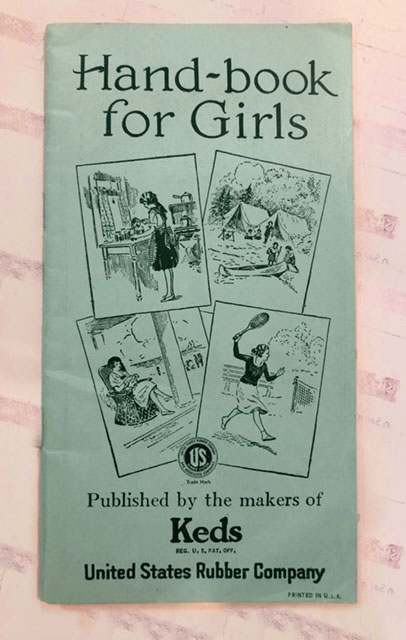 That 100-year-old book, "had content like how to play tennis or go bird-watching, which was very progressive for women at the time," Gallino recalls. "[For the 2020 version] we wanted to let women express and share their own stories, in their very own way."

To focus the subject matter, "we spoke to young women around the world and found that many of them grew up with the brand or remembered their mothers wearing Keds," says Joan strategy director Chris Turney. "It inspired us to explore how the meaning and experience of womanhood has changed. They're pushing back against the expectations of their families, their societies, even sometimes themselves. In that spirit, the brand shouldn't reflect one perspective or feeling, but celebrate the complexity and beauty of what makes womanhood today."

Gallino adds: "Our goal was to be infinitely inclusive across races, abilities, nationalities and assigned genders. We are not here to judge. We wanted to challenge traditional standards."

"Keds collaborated with individual photographers who went on their own and captured women from very different walks of life, rather than staging photo shoots," she says. "So the photo assets were absolutely organic without having a brand or agency dictate how it should look, or what they should do."

This yielded a campaign that looks and feels more like editorial than a promotional play, marking an evolution of Keds' penchant for partnering with exceptional women in its race against competitors like Allbirds, Converse and K-Swiss.

Matt Powell, an analyst who follows athletic footwear and apparel for the NPD Group, calls it "a clever way to turn an old school marketing tool into something fun and modern."

The initiative arrives as Keds and its parent, Wolverine World Wide, look to maintain momentum and step into new territories. Wolverine enjoyed an upbeat fourth quarter, with Keds contributing "low single-digits growth" ahead of its spring reboot in the U.K. after a 20-year absence.

"Keds was the original rubber shoe for women," positioning the brand as "a voice in the constant push for progress," says Joan account director Katie Persichilli. "We wanted to continue their lineage by providing opportunities for women to move forward in their shoes, but also in the stories and actions that define them."