Staying home to bake a sourdough loaf, working out in the living room, and ordering a pizza become acts of heroism in this visually dynamic appeal from agency Iris, designed to help raise funds in the fight against the pandemic.

Dubbed "Stay Home Heroes," the initiative broke this week on social media and in OOH space across the U.K. donated by Clear Channel. It features cheekily dramatic shots of average folks doing mundane stuff at home, thereby reducing the Covid-19 risk to health professionals, the general public and themselves: 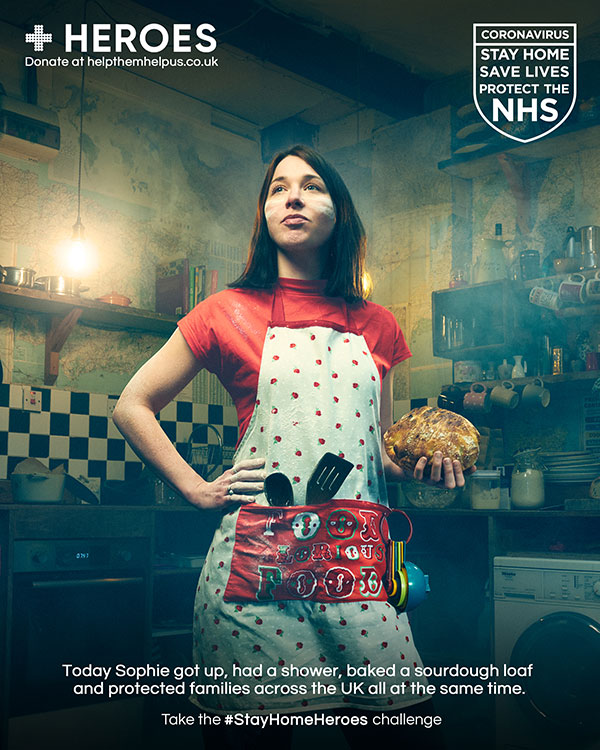 For the campaign, Iris picked 26 photographers, mostly portrait specialists, to craft the images, asking them to create a "Stay Home Hero" photo in their respective lockdown environments, while obeying strict isolation rules. So, family and friends already on hand sat in for professional models.

For example, "Sourdough," the ad shown above, features Sophie, flatmate of London-based photographer Sam McElwee. Sophie had just been furloughed and taken up baking, so—naturally—"Sam wanted to capture her as the protagonist in a movie-style poster," Iris creative director Ross Taylor tells Muse.

McElwee used flour to heighten the atmosphere, producing "an image that has become iconic within our campaign," Taylor says. "It's the epitome of what we were trying to achieve."

McElwee would transmit proofs at the end of each day to his production associate Eveyln Houf in Australia. "I sent files at night and woke up to finished images, which was rather amazing," the photographer says. 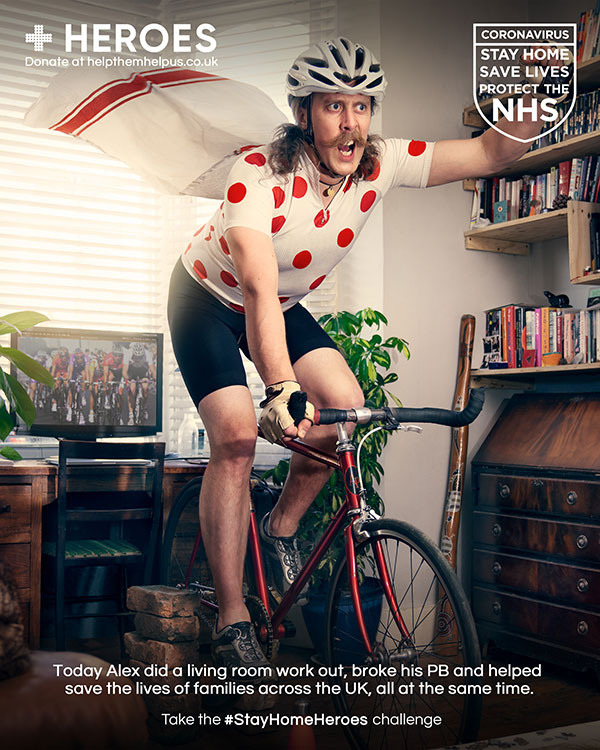 "I was able to get a camera and laptop to Alex via courier," Slater says, which allowed him to direct the shoot in real time and carefully set up shots.

"It worked perfectly, and topped with some amazing performances from Alex, produced a strong fun image," he says. (That's Tour de France footage playing on the TV screen.)

Next, we meet Bex, who dons an indoor "face mask," orders pizza, and watches a movie—can you guess which one?—in this portrait by Jason Knott: 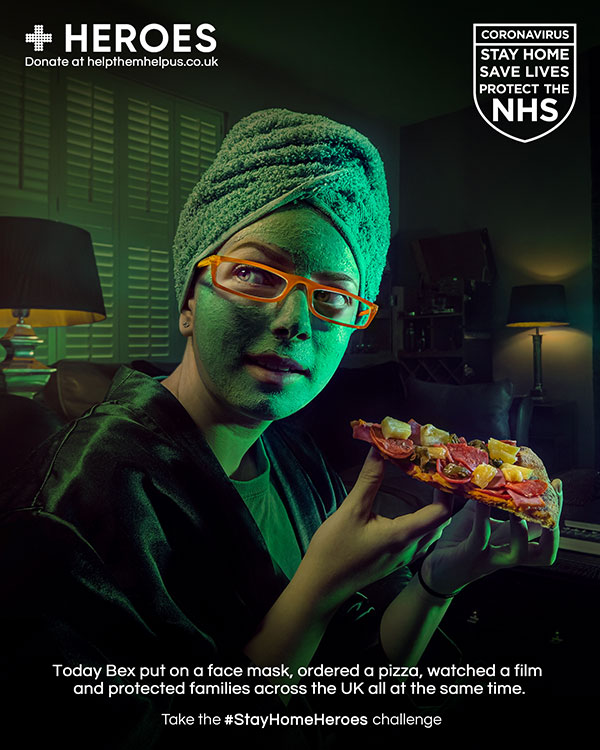 "Jason's concept really excited me," Taylor says. "He was playing with cultural references, but in an intelligent and subtle way—in this case, 'Teenage Mutant Hero Turtles.' He persuaded his reluctant daughter to cake her face in a green mask, and pose with some orange glasses—a nod to Michelangelo's orange bandana, of course! He even had a local pizza delivery place use the exact toppings that aligned with the character's favorite!"

Iris aimed wide, Taylor says, targeting "everyone who is beginning to feel lockdown fatigue. Our images cover a plethora of tones, from funny to emotive, along with a wide range of subjects: fashion, sport, cooking. We worked with a range of photographers, as we knew it would give us enough range to talk to a really broad audience."

"The idea is that our campaign is highly shareable, borrowing tropes of meme culture with our irreverent headlines and 'thumb-stopping' imagery that has the ability to talk to a broad spectrum of people," he says.

Below, you can check out some more ads in the series.

Click/tap the thumbnails to enlarge: