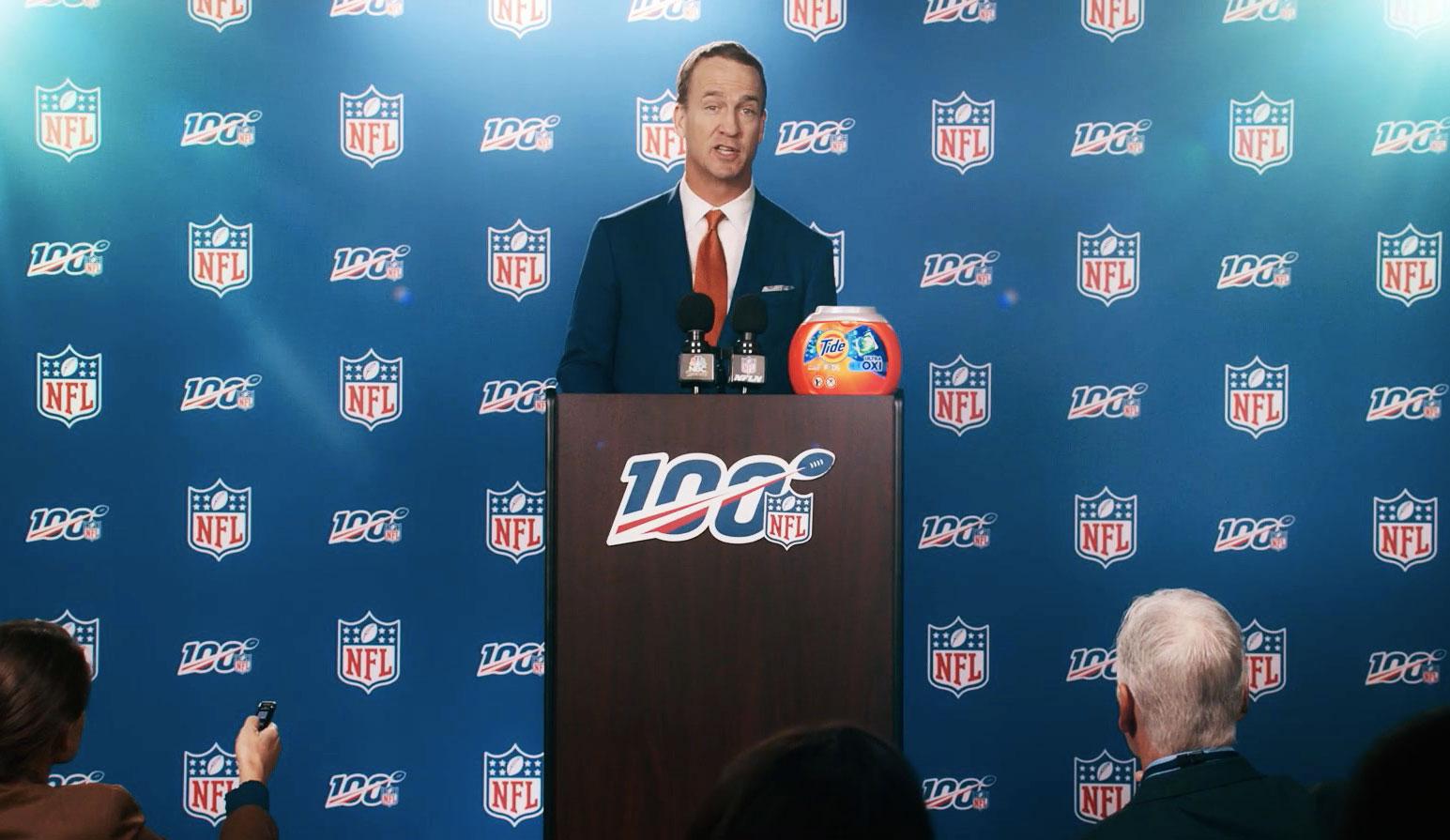 How Tide Got 3 NBC Shows Arguing About 'Laundry Night'

It's a Tide ad … even though the Super Bowl is still five months away.

Peyton Manning kicked things off at the close of the first quarter, with a mock NFL press conference—at first, seemingly part of the game telecast—declaring that Sunday nights are made for football, and that trips to the laundry room can wait until Tuesday.

Not so fast, Sheriff. (That's Manning's nickname! We googled it!) In the very next spot to air, Gwen Stefani roughed up the former Colts and Broncos quarterback for his announcement. If everyone's doing laundry on Tuesday, she groused, they won't be able to watch her NBC show, The Voice.

At the two-minute warning of the first half, Manning returned with an apology of sorts, proposing that one of the five other days—but certainly not Tuesday or Sunday!—should be designated for laundry.

The NFL apologizes. Laundry Night is any Other Night. | Tide

Finally, cast members of NBC's Superstore—Lauren Ash, who plays Dina, and Mark McKinney, who plays Glenn—appeared in the very next ad after the "apology," and were not amused. They worried that Thursday, when their sitcom airs, could be chosen for getting those bloomers squeaky clean.

Superstore Wait. Laundry Night is … during our show! | Tide

Tide agency Saatchi & Saatchi New York tells Muse that the idea stemmed from two truths about Sunday: It's the day of the week when the most households do laundry (over 200 million loads, the shop says), and also, obviously, one of the premier days for watching football. These two insights combined for some built-in tension for maximum engagement.

The battle was a Twitter trending topic on Sunday night, so the agency believes the effort paid off.

Clearly, Tide is channeling some of the meta mojo generated by its 2017 and '18 Super Bowl campaigns. In 2017, the brand aired a surreal commercial romp that seemingly began in the broadcast booth before morphing into Terry Bradshaw's zany quest to remove a stain from his shirt. In 2018, "It's a Tide Ad" skewered big-game advertising stereotypes across all four quarters, with David Harbour presiding over spots that spoofed Mr. Clean and the Old Spice Guy, among others.

Both campaigns, also devised by Saatchi, received high praise, with "It's a Tide Ad" winning the Super Clio, which honors the best campaign in the Super Bowl. (Tide did a follow-up stunt in the fall of 2018, with a pair of spots integrated into Fox's Thursday Night Football broadcast.)

"When Is Laundry Night?" isn't quite as daring as either of the two Super Bowl gems, which gained considerable gravitas by strutting their stuff on advertising's premier stage. Still, the new work's extended narrative delivers its culturally aware message with impressive style, making the spots welcome additions to Tide's evolving, ever-innovative spin cycle.