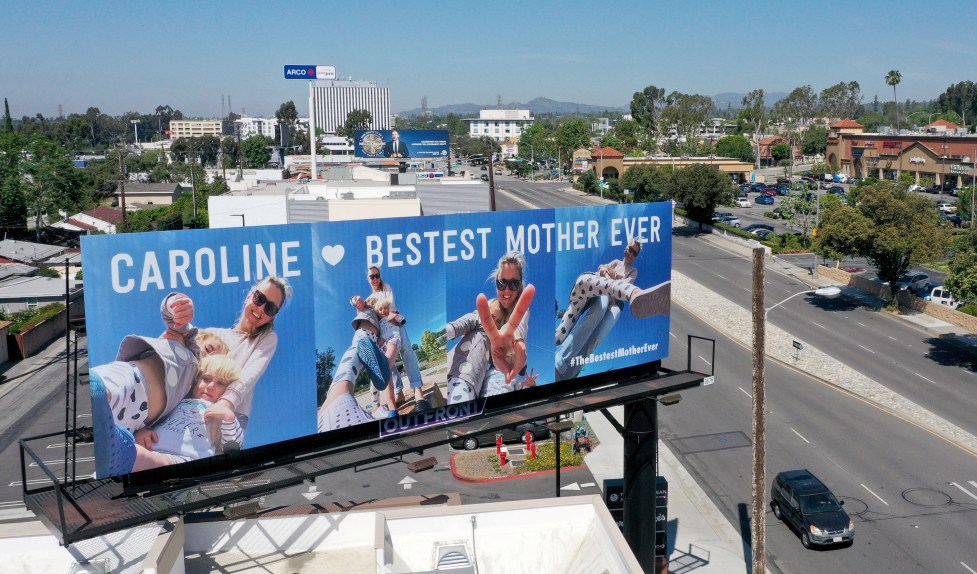 There are a few silver linings around Covid-19. One is that out-of-home advertising has gotten pretty affordable, with everyone staying home—a development that Eric Wegerbauer took full advantage of this weekend in grabbing two billboards to celebrate his wife on Mother's Day.

Wegerbauer, chief creative officer of Publicis West, snagged the OOH spaces on in Pasadena on East Foothill Blvd.—one just before Quigley Ave. and the other just after. On one, he posted four photos of his wife, Caroline Jackson, playing with their kids. And on the other, he posted a veritable manifesto of gushy love—a magnificent long-copy celebration of the "goddess" Caroline.

Both ads are tagged #TheBestestMotherEver. See them here:

"It's no use trying to define this goddess because she bursts through any boundary a dictionary (or this billboard) tries to put around her," the long-copy ad says in part. "She's the mountain our kids stand on. The rainbow they frolic with. The feathers that keep them protected, warm and loved. And she's the stars our kids look up to and always dream of."

It must have been a pretty mushy scene on Sunday when Wegerbauer drove the family over to the billboards to surprise them.

Now, Wegerbauer fully admits the long-copy ad might be a little tough for motorists to take in. But sometimes you do crazy, inefficient things for love.

"I broke a lot of rules on that second billboard," he says. "They told me 'best practices' was to limit your message to seven words or less. I told them that was impossible, that Caroline needed a lot more than seven words."

That no one is likely to read the ad is "perfectly fine with me," he adds, "because it's only meant for Caroline."

Jackson, meanwhile, works in advertising as well. She's the West Coast managing director for experience design company Elephant. They met at Ogilvy New York while working on UPS—Caroline was Eric's account person, and it was, in his words, "love at first brief."

Wegerbauer extended the "Bestest Mother Ever" campaign to Instagram, where you can see lots of posts with the hashtag and more pics of Caroline in all her goddess glory.