Avon Institute crafts 'You Are Not Alone'

Tragically, such household objects are all too often the only "witnesses" present when women suffer violent, even fatal abuse in their own homes at the hands of a partner.

Now, such items come forward and "speak" their truths in "You Are Not Alone," a series of harrowing, heartrending long-form magazine ads from Brazil's Avon Institute, the social investment arm of the beauty brand. J. Walter Thompson, Mutato and I-Cherry, collaborating under the Hub Avon banner, created the campaign.

Each two-page spread shows a small monochrome image of a household object, accompanied by hundreds of words of copy rendered in typewriter font. In plain yet poetic language, the narratives slowly build to scenes of brutal tragedy.

Take, for example, the pillow's tale, which opens with lines such as, "I've always been there. For her first pajama party, her first time and her first heartbreak." 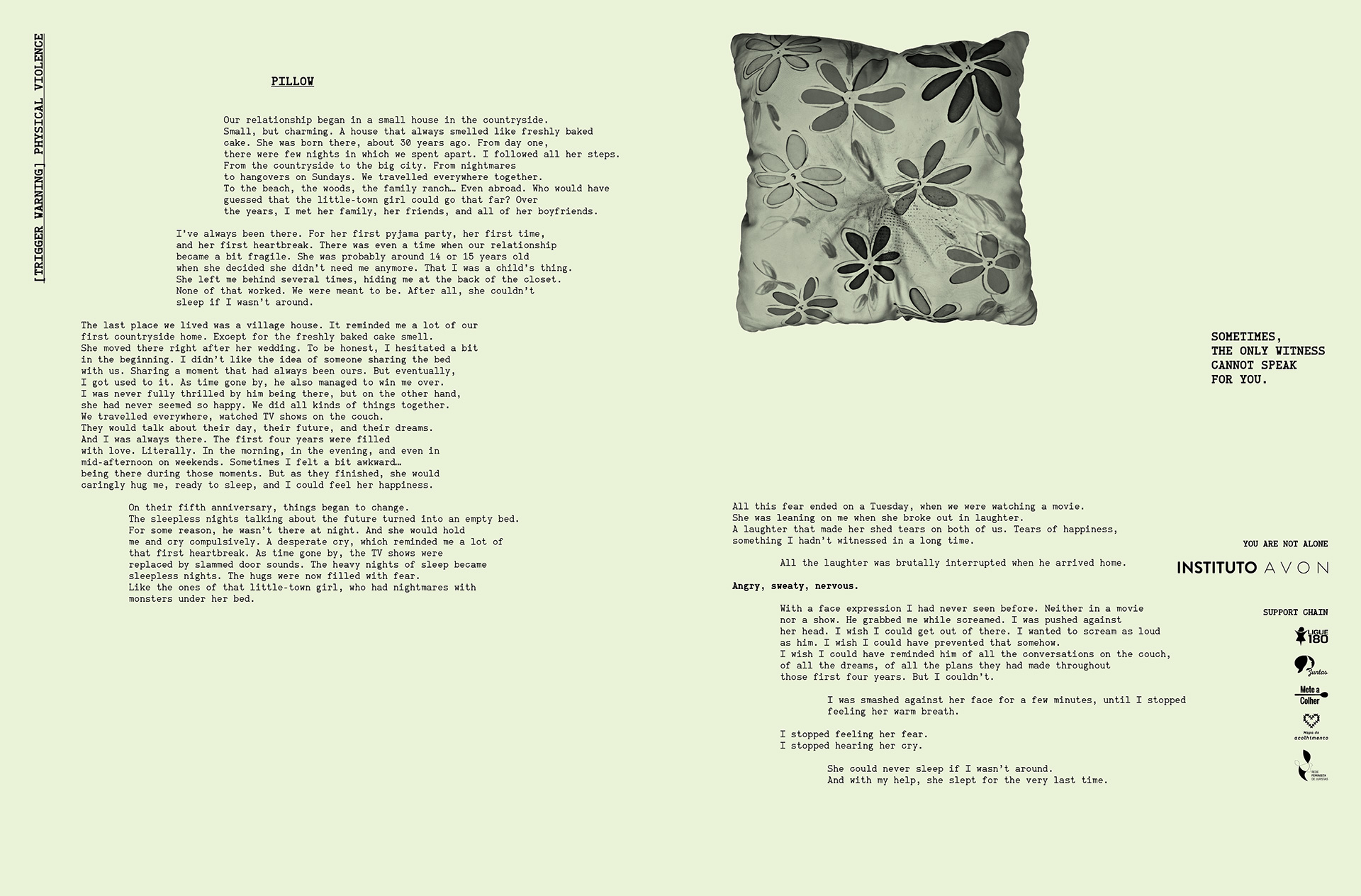 That deft bit of compression effectively portrays the pillow as a character in the story, while creating instant empathy for the unnamed woman in question.

"She was probably around 14 or 15 years old when she decide she didn't need me anymore," the copy continues. "That I was a child's thing. She left me behind several times, hiding me at the back of the closet. None of that worked. We were meant to be. After all, she couldn't sleep if I wasn't around."

When the woman marries, the pillow objects. "I didn't like the idea of someone sharing the bed with us. Sharing a moment that had always been ours. But eventually, I got used to it."

After a few years, the human relationship sours. "For some reason, he wasn't there at night. And she would hold me and cry compulsively."

The resolution, though not entirely unexpected, unfolds like the stuff of nightmares. "He grabbed me while she screamed. I was pushed against her head … I was smashed against her face for a few minutes, until I stopped feeling her warm breath. I stopped feeling her fear. I stopped hearing her cry. She could never sleep if I wasn't around. And with my help, she slept for the very last time."

You can read the other, similarly shattering ads below. Each one carries the tagline, "Sometimes, the only witness cannot speak for you."

See larger versions of each ad at the links above the images: 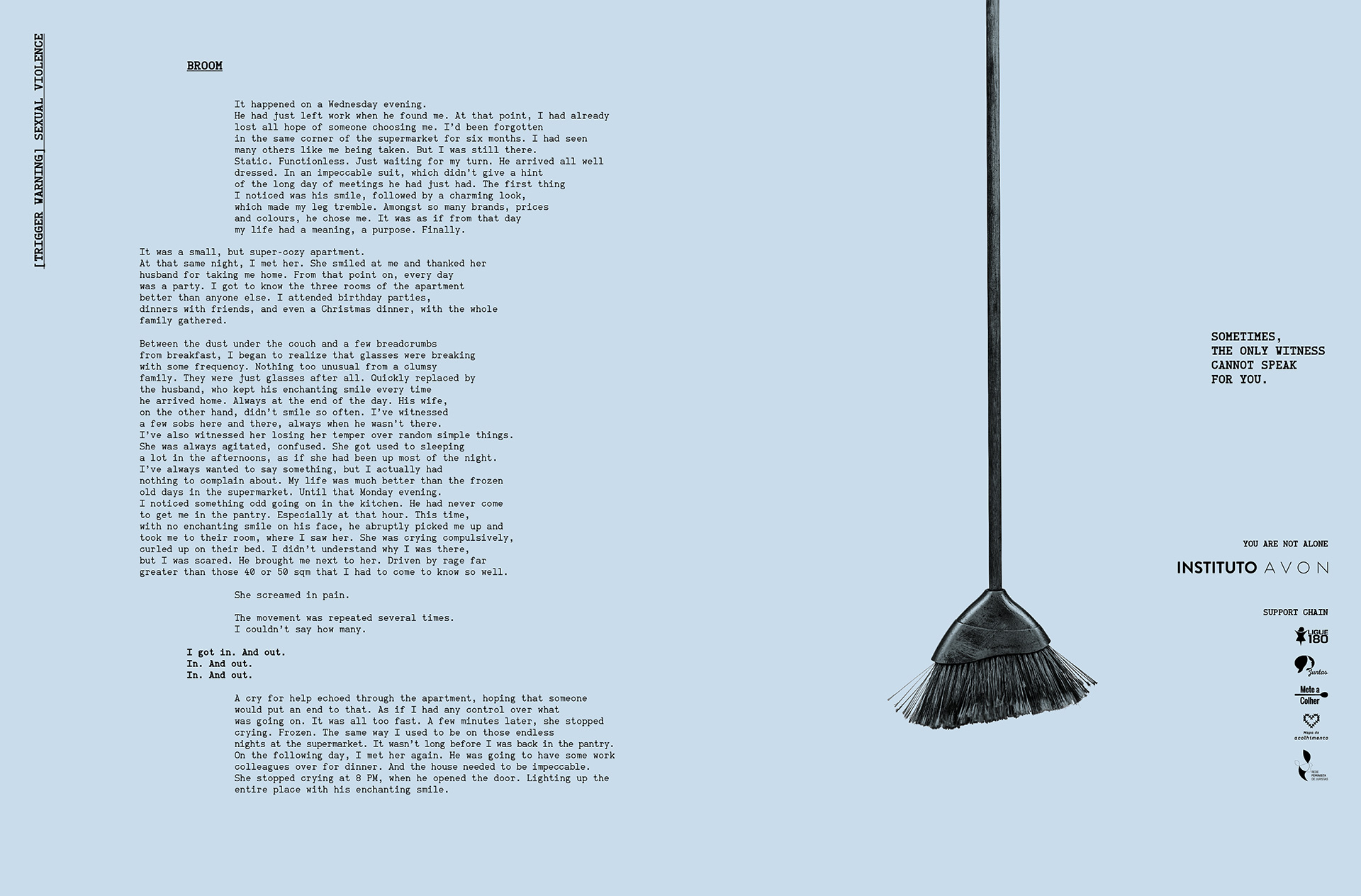 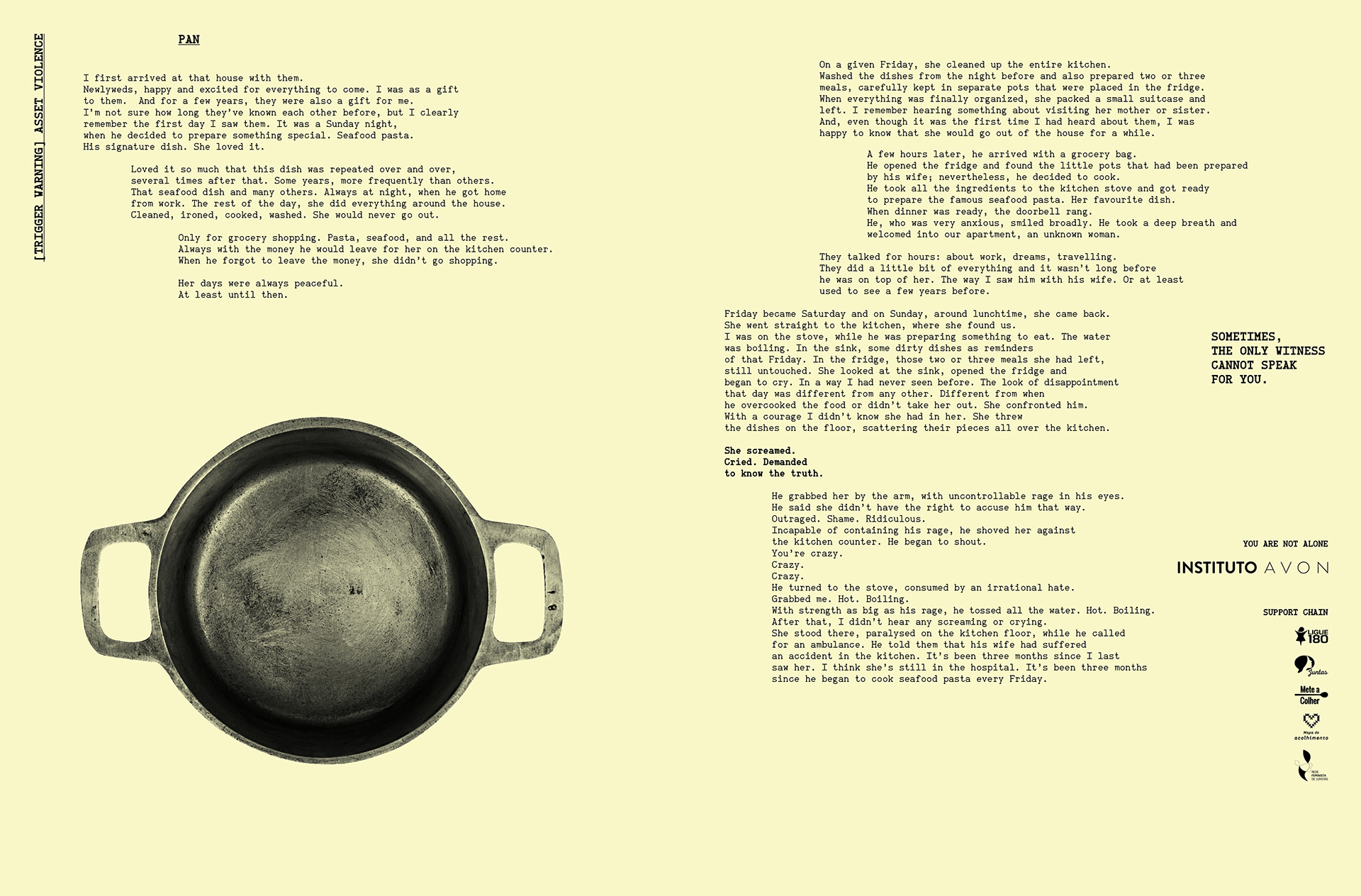 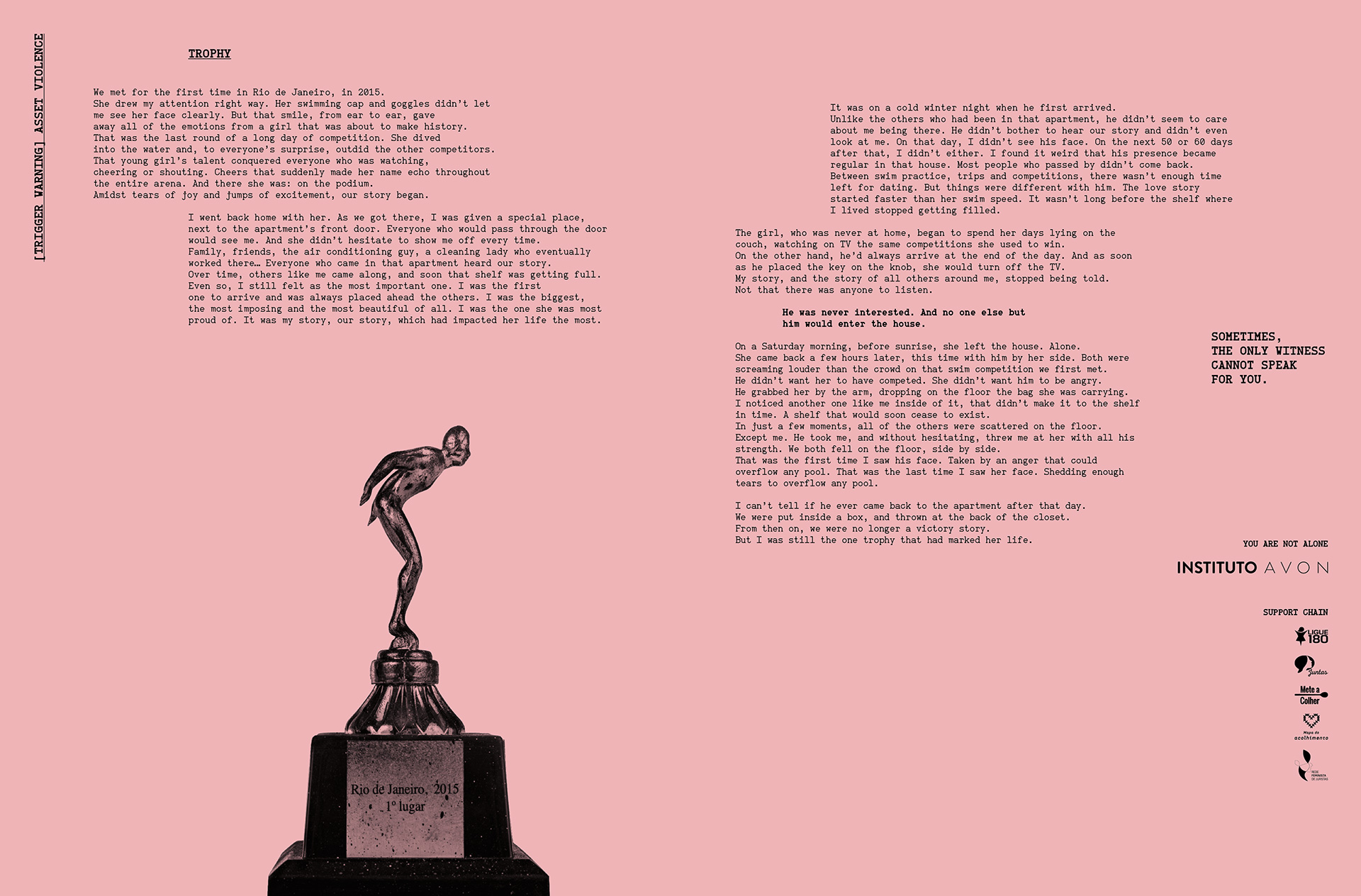 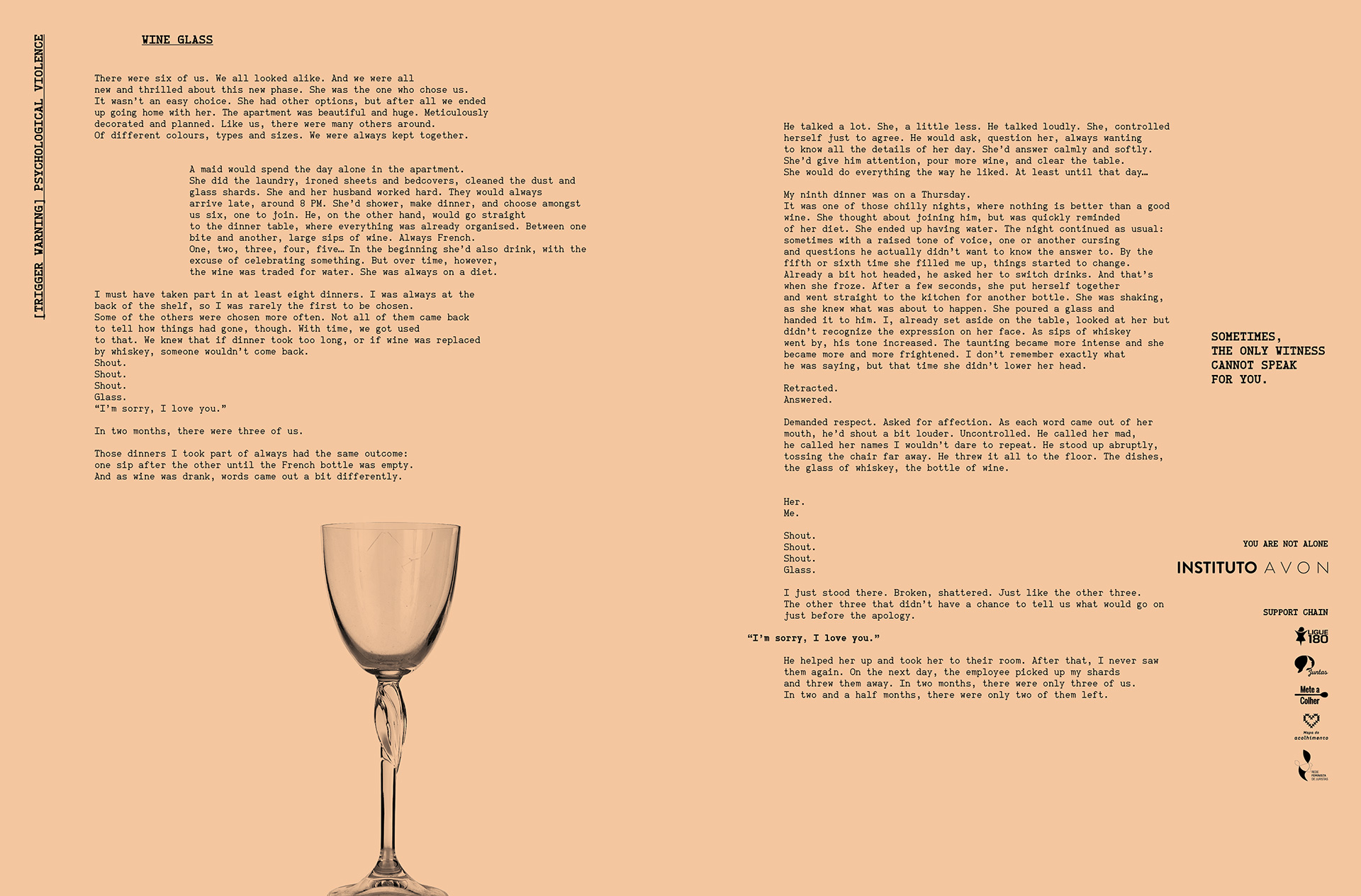 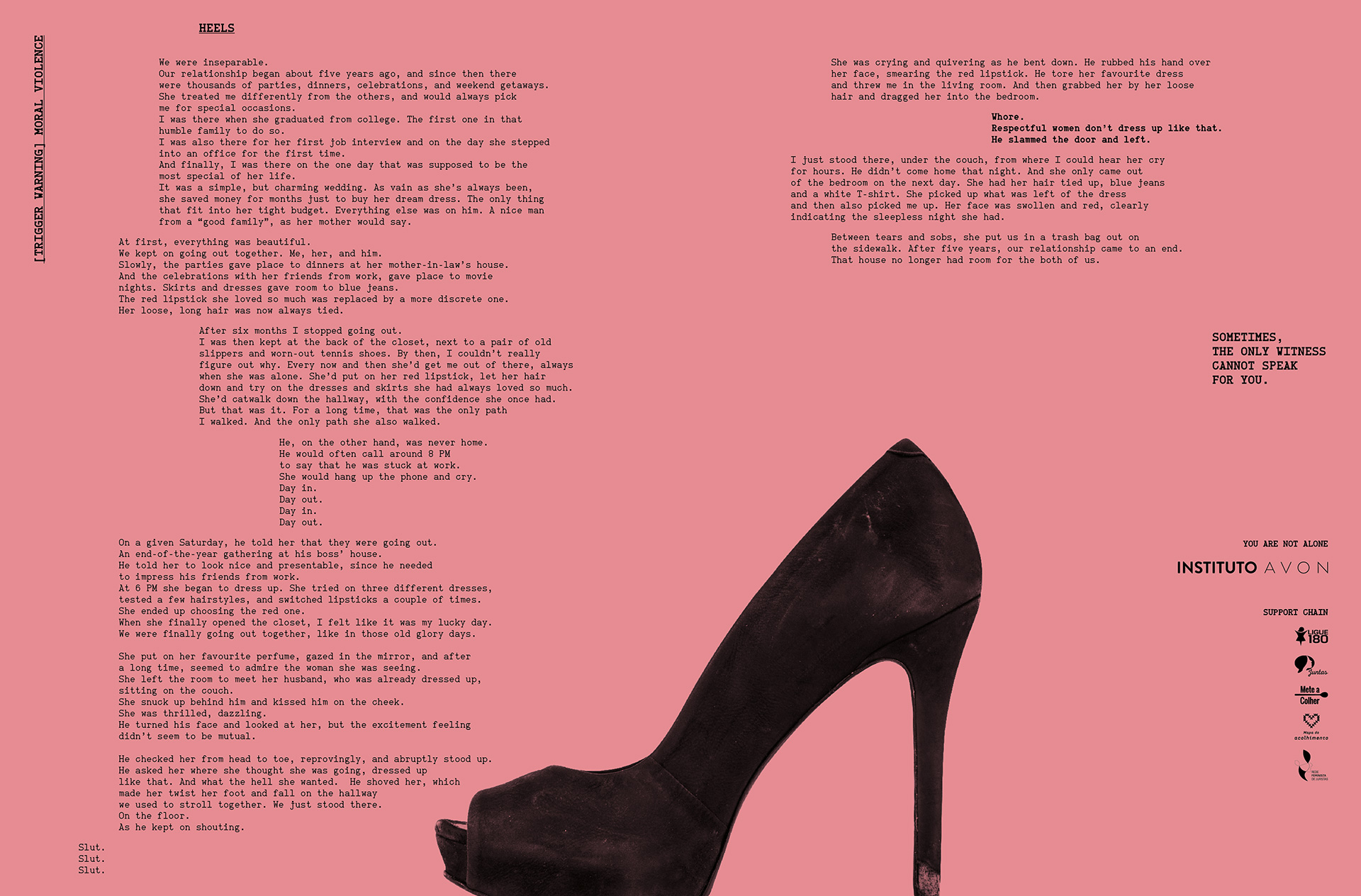 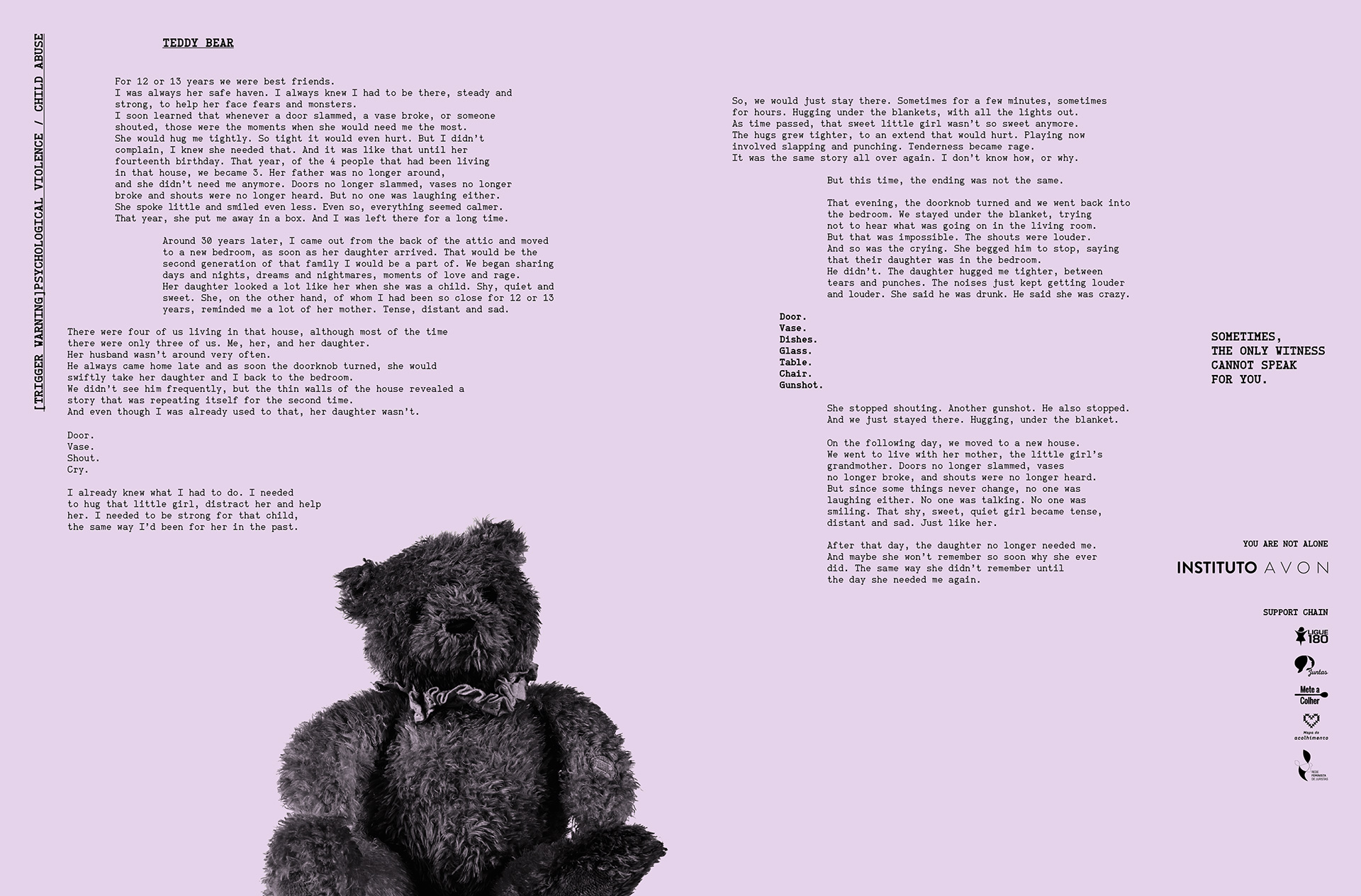 Of course, the work suggests the objectification of victims at the hands of their tormentors. It also cuts far deeper, presenting the items as beloved confidants. Such intimacy feels so wrenchingly emotional, at times it's difficult to read the copy all the way through.

By feeling the objects' pain, we come to the know the women's suffering. By sharing the sorrow, we stare into the abyss.

"We identified the central reason behind why so few female victims of violence report this crime—the lack of eyewitnesses," says JWT and Hub Avon creative director Danilo Janjacomo. "There are still few female-led police stations, and women give up reporting cases of violence because they do not believe there is a real support to help them effectively. Through the 'testimony' of the only witness—the objects involved—we are shedding a light on this problem and showing that there is a support network created by Avon to help."

While most PSAs would naturally show the abused women, the Avon team took an unexpected direction. "If we picked a face to represent this subject, then we would no longer be talking with everyone," Janjacomo says. "Secondly, we were looking to get urgent attention for this subject by using different angles—and the long copy was consciously chosen to offer a deeper and more involved experience."

Using long copy also creates moments "when it's just you and story," adds copywriter Julia Machado. "Unfortunately, most people know a story about domestic violence. This influences each person's interpretation of the story, and means that each person will imagine the woman in their own way. This is something we could never do with a film."

Though not modeled on specific cases, each narrative has a factual basis.

"We saw that these stories have a lot in common, and that's something we aimed to bring to the campaign. It always starts with everything being fine. Then we get to see some small signs of violence inside the house—broken glasses, fights, a distance between the couple—and they soon increase to the final violence, be it physical, physiological, moral, sexual. After reading so many reports and victims' testimonies, and just by being a woman who knows women who have been in this situation, I could understand how common but yet sorrowful these narratives are, and how could we portray them in a way that many other women would relate to it."

The work stemmed from a recent UN report that determined the most dangerous place for women is in their own homes. A 2015 study concluded that over 70 percent of Brazilian women will suffer some kind of violence during their lifetimes.

"Over the years, we have come across thousands of real stories of women," says Avon vp of marketing Danielle Bibas, "some of whom sought help in time and decided to share their stories to inspire other women to see that these are not acceptable types of behavior. Some stories were told after the facts happened, after many years had gone by, and women were able to reminisce about what they went through at some point in their lives—always wishing they had done something sooner to end the violence and the abusive behavior."

Along with placements in magazines such as Marie Claire, Claudia and Piauí, elements of "You Are Not Alone" have graced radio commercials and out-of-home signage, as well as an art installation in São Paulo. For that show, the ads were blown up into huge panels, and with the actual objects—pillows, toys, high-heeled shoes—also on display. Visitors listened to audio recordings of the text.

"We wanted to show the stories in other formats to create different connections and experiences," says Hub Avon art director José de Oliveira. While retaining the ads' impact, public displays also sparked immediate discussions among onlookers and helped foster "a real sense of community," he says.

In doing so, Avon hopes women will realize "there is a way out," Bibas says. "They should seek help and not subject themselves to this violence. These types of behaviors are not acceptable, and nobody, under any circumstances, should have to go through this."