This Horrific Ad Will Awaken Your Demons. But What Is It For?

A plea for restoring balance, in the most pragmatic sense of the term

In an essay called "Economic Possibilities for Our Grandchildren," published in 1930, economist John Maynard Keynes made a prediction: As technology evolves, machines facilitate life and good ideas ease into the economy, working hours should fall and quality of life should rise.

Keynes went so far as to say his grandchildren would work something like 15 hours a week—basically two full-time days, with five days for ourselves.

It's no secret that this hasn't happened (how many economists' predictions actually do?). In 2015, NPR's Planet Money even tracked down Keynes' sister's grandchildren (he didn't have kids) to ask how many hours they worked.

One estimated that he worked about 15 hours a day, or around 75 hours a week. The other estimated she worked 50-hour weeks. Worse, Planet Money found that making more money can often make it even harder to take time off.

A trap's been laid somewhere. The work we do for money—meant to ensure we can secure shelter, food, a certain level of security and comforts—has become our actual reason for living. Debt, unstable healthcare, systemic "necessity" costs and revolving lifestyle purchases ensure we're stuck in those loops as long as possible.

This is everything we thought about when we watched "Dream Thieves." Watch out; it's 13 minutes long.

Somebody recently remarked that a film like this is instantly spoiled by the fact that we know it's an ad; you spend the entire length of it waiting for the sales drop. That's a pity, because "Dream Thieves" tells a compelling tale, walking that line between Apple's "1984" and something even more horrifically surreal, speaking directly to an existential fear in visceral ways—those scary nighttime headsets, the mysterious black gunk, the dream-sapping militants, the invasive way they rob you … and the husk of humanity you're left with in a city gone silent.

But what is Koho?

The answer may disappoint, but probably not surprise: It's an online bank with minimal, transparent fees and instant updates. Basically a Canadian version of N26.

"Dream Thieves," produced by Cossette and directed by Fleur Fortuné with DOP Matias Boucard in Kiev, Ukraine, debuted at Toronto's Fringe Fest. It was conceived under the insight that two-thirds of Canadians lack sufficient funds to sustain an account minimum that the country's five biggest banks require to avoid fees; half of Canadians are living paycheck to paycheck.

"We are at our best when working with brands who are willing to invest in creativity, to redefine their categories. Koho is innovating in an emerging market, which provided us with the opportunity to help build the brand in a way that is completely unexpected," says Cossette global chief creative officer Carlos Moreno.

"The rules of advertising have changed. There are no more boundaries, which enabled us to tap into a hunger for change that is being felt around the world."

From Aug. 1, the film's two-minute version started running in Alliance Atlantis theaters across the country. While we doubt a more transparent banking service will solve the sense we have of being uniformized and transformed into mindless money machines, "Dream Thieves" does stoke the woke to a larger question: How hard are you willing to fight the tide to live the kind of life you want? Do you even know what that looks like?

As food for thought, we'll leave you with a short, amusing selection of the comments that appear under the two-minute version of the film. 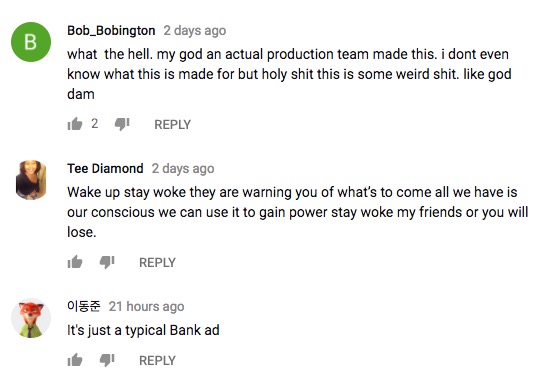