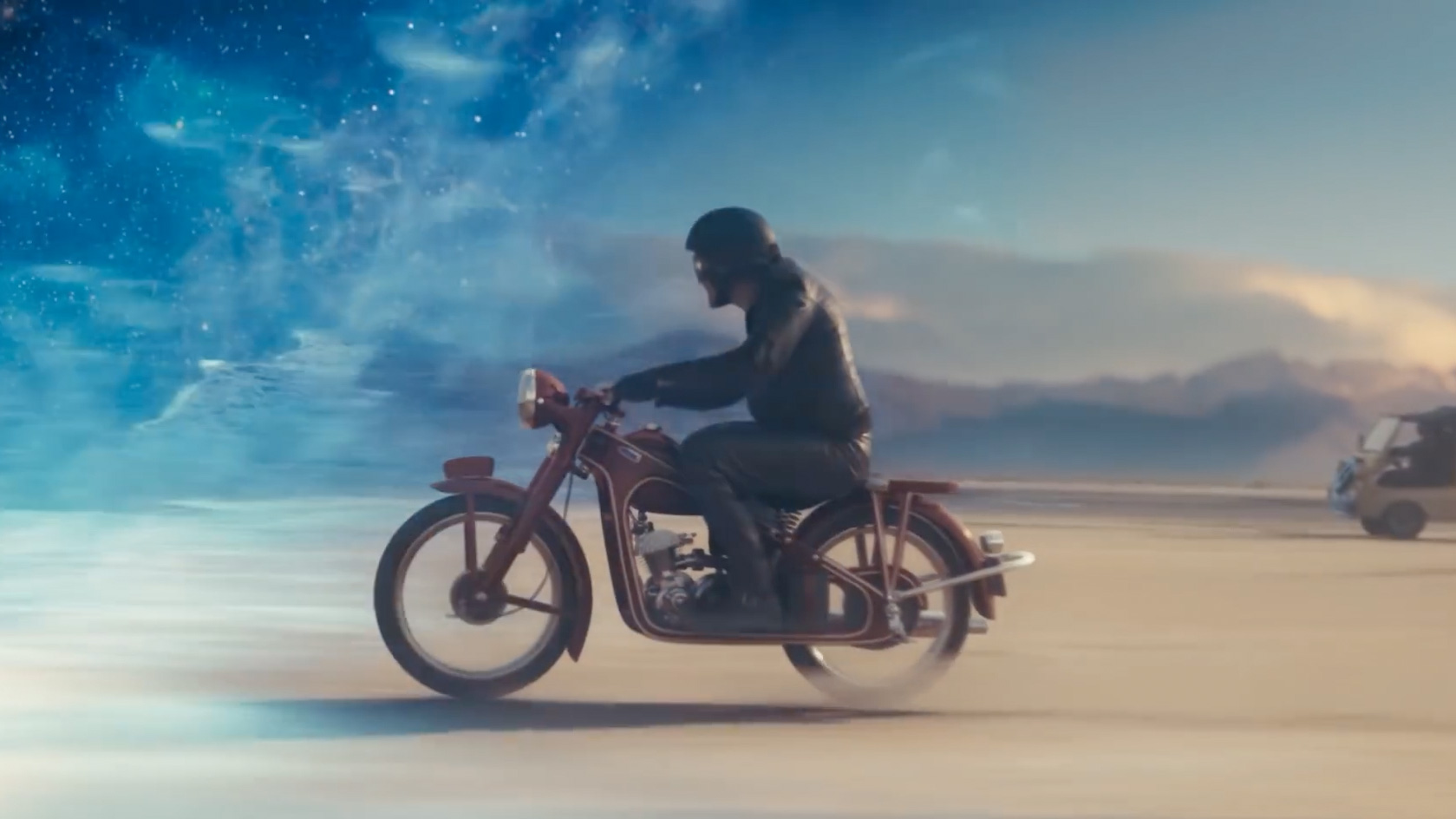 A 1949 Dream-Type motorbike rumbles through the dunes, while Honda's S600—its first passenger sedan, from 1964—glides across the sand. Suddenly, a RA272 Formula 1 racer, circa 1965, zips past, as a HondaJet Elite S—launched in 2018—zooms overhead.

RPA, Elastic director Paul Mitchell and VFX house A52 stage such scenes in a :60 called "Origin of Determination." Narrated by John Cena, and set to a high-octane remix of Verdi's "La Traviata, Act I" by Superhuman, the film sleekly combines live-action, animation and archival photos, taking viewers on a ride to remember.

Honda – The Origin of Determination

"Honda has a unique story to tell related to the incredible depth and breadth of vehicles we offer for the land, sea and sky," Jessika Laudermilk, senior manager of marketing for American Honda Motor Co., tells Muse. "We wanted to create a bold moment to help people understand that every product is engineered and designed to make the lives of our customers better."

Honda drew on its history a few years back in somewhat similar fashion. This latest trek through time, however, arrives amid a global microchip shortage that leaves some showrooms short stocked. With demand already elevated, it probably makes sense to take the high-road, highlighting brand heritage in lieu of pitching specific models that consumers might struggle to find.

50 pros in the driver's seat

"The production took a little over four months from start to finish and required extensive, around-the-clock work from a team of over 50 VFX artists. To create the concept required extensive research of several hundred Honda vehicles spanning their 73-year history.

"With over 100 products spanning various categories, eras and locations, recreating them using CGI and visual effects was the most effective way to gather all these products together in one commercial. From just a logistical perspective, moving this number of vehicles to various locations would be next to impossible—especially considering some of these vehicles are one-of-a-kind and have been historically preserved in museums for years. So, the production approach had to be multifaceted—requiring a combination of meticulously crafted CGI, LiDAR scans, live-action footage, reference plate photography and historical reference imagery."

From the Mojave to Namibia

"Environmental plates and elements were shot in the dunes and coastline of Namibia, and our talent interactions were captured in El Mirage Lake in the Mojave Desert. A team of artists and technicians from around the globe worked remotely to make this dream real."

"We often joked about the never-ending spreadsheets because of how much research, vetting and attention to detail was needed on so many diverse vehicles. Not only did we have to ensure we were using historically accurate engine sounds and driving dynamics, we also had to ensure we were portraying the right kinds of drivers. We consulted with historians on several occasions. Even though the spot features over 100 of the most famous Honda vehicles, we know this is only the tip of the iceberg, as Honda is still bringing so many new innovations into the world."