A look at the 'graphic vernacular of American politics'

Want to explore the 2018 U.S. congressional races purely from a visual design perspective? Here's a site that could keep you busy for hours.

A new research group called the Center for American Politics and Design (CAPD) has been launched to investigate what it calls "the graphic vernacular of American politics." Its first project is a fully searchable and sortable archive of the campaign logos for every major candidate running for the U.S. Senate and House of Representatives in 2018.

As the default, the site presents the logos—there are more than 1,000 of them—in alphabetical order by the candidate's first name. But the collection is sortable by logo color, typography, iconography, party, candidate gender, state, office sought, and incumbency status.

CAPD is inviting analysts to examine the logos and draw their own conclusions about design trends, but has done some crunching of the data itself.

For example, despite the traditional color associations of blue for Democrats and red for Republicans, both parties overwhelmingly prefer blue as their main logo color. The percentage of red signs noticably spikes, though, for Republicans advertising in heavily Democratic districts.

Meanwhile, Democrats are twice as likely as Republicans to use purple as their primary logo color, and three times as likely to use green.

There are, of course, scads of logos that feature flags: 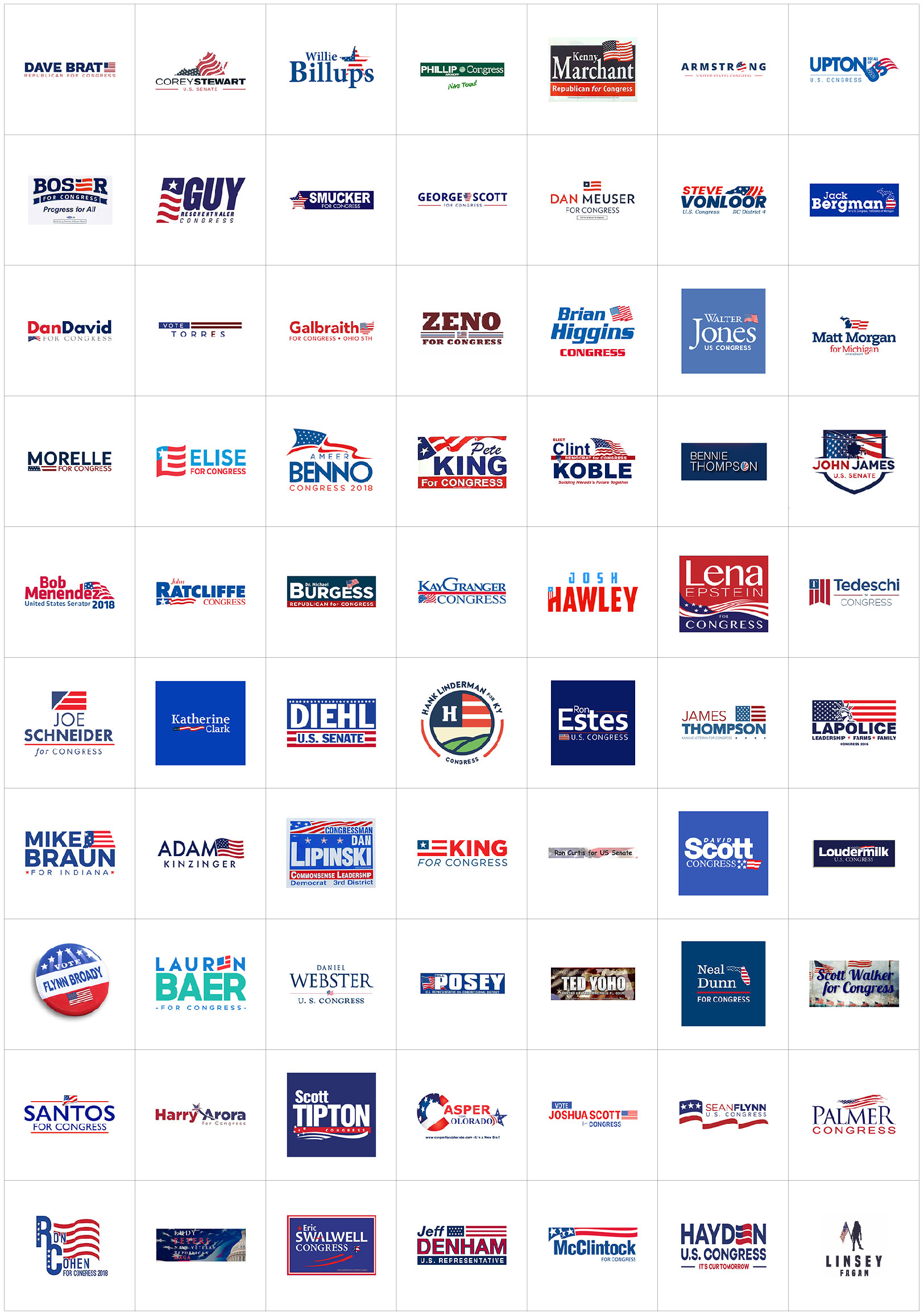 CAPD's founding members are Lukas Bentel, Seth Kranzler, Will Denton, Kevin Weisner and Susan Merriam. You may remember Bentel, who is a partner and creative director at Hello Velocity, from his work on Brand New Roman—the font made entirely from brand logos.

Also, there is one logo designed with the Comic Sans font. Can you find it?

We spoke to Bentel more about this project.

What made you want to do this?
The Center for American Politics and Design was initially the brainchild of Susan Merriam, and she has a good story about initially starting to build this database:

"Being in New York's 12th district, over the course of the Democratic primaries this year I witnessed a graphic design war in my mailbox between upstart Suraj Patel against incumbent Carolyn Maloney, where it seems Maloney's campaign was forced to send a second round of mailers with more hip graphics after the Patel campaign. Patel's clearly aimed at a younger audience with branding and marketing materials akin to upstart businesses like Casper with clean graphics, colored gradients, and millennial pink, which forced Maloney to change their design approach in what would otherwise would be a pretty safe race for a 25-year incumbent. This made me research further. I wanted a way to explore the different trends and see what else is out there in other parts of the country."

I was excited to see if there would be any discernible trends along party, location or demographic lines.

How did you go about collecting all the logos?
It was a lot of brute-force work. We divided a list of all the candidates and just went to town searching for each candidate's logo. There were a number of candidates who were hard to find because they didn't have websites or even public social profiles. A lot of thanks goes to sites like 538 which had compiled lists of all candidates running for office, which was our starting point.

Did you uncover any interesting broad trends?
There are definitely some interesting trends. This may seem obvious, but it is worth noting generally Democrats use more blue and Republicans use more red. But also, candidates from both parties use blue much more than red—likely for practical graphic design reasons.

Looking at other colors, Democrats use twice as much purple as Republicans. More interestingly, purple logos across the board are overwhelmingly from female candidates. This probably gets us more into the territory of color and gender politics than party affiliation.

Not really a quantifiable trend, but it is worth noting how awfully undesigned a number of these logos are. This probably does reflect to some degree that people in politics are simply clueless about design, but also we should consider that the overall look and feel of U.S. political design is rooted in low production quality because it's been shaped by politicians' desire to look personable—or our desire for them to. Quality graphic design is for corporations. There are, of course, plenty of exceptions to that rule, and it's worth noting that Senate candidates—and especially anyone who's ever been attached to a presidential campaign—go much higher production value.

I think it will be interesting to cross-reference the use of green with states who have legalized or are in the process of legalizing marijuana, although we haven't done that research yet.

And which one is the Comic Sans?
Ron Curtis from Hawaii.