Daniel Wolfe's 2-minute film has all the right moves

Sweaty moves. Trash talk. Strategy and sacrifice on dynamic display in a Brooklyn park, as locals stomp and shout with each lightning-fast reversal of fortune.

The street games in Droga5's stirring new film for Hennessy contain all that more. But this isn't basketball. It's chess, played with startling speed and intensity, in a two-minute film chronicling the rise of Maurice Ashley, crowned the game's first Black grandmaster 21 years ago.

Quick cuts, spot-on visuals that recreate steamy, gritty NYC circa 1993, and a dazzling mix of classical tracks and jazzy hip-hop drive the narrative:

That's a loving re-creation of the Black Bear Chess School, an obsessive crew renowned for producing champions. They played with a five-minute time limit—not for each move, for the entire match—and tried to distract opponents with word-a-second razzing, such as:

Trying executing a Ruy Lopez with that bouncing through your head!

Ashley, now 54, and portrayed as a young adult here by Khari Christopher Jones, learned to tune out such trash and hyper-focus on the game unfolding on the board. It took extreme discipline, emotional fortitude and guts. Along with the hero film, his quest for perfection also unfolds in a five-minute documentary, as Ashley explains his motivations and methods:

"The mid-'80s, in New York, in Brooklyn, it was crazy, for me to have chess as an outlet, something that I always wanted to do, that kept me away from the bullets that were flying outside," Ashley says at one point. "I was always inside studying chess. I just knew that this was what I wanted to do all the time."

He adds: "There are more possibilities in chess than atoms in the observable universe. That kind of complexity of the game is what keeps us coming back, again and again—it just simply took over my life."

Climbing through the ranks of international competition, Ashley worked tirelessly to perfect his technique, train his mind and strengthen his resolve, ultimately defeating Adrian Negulescu of Romania to secure the title of grandmaster.

"The first few moves of the game, I was still nervous," he recalls. "And then a quiet calm came over me, and I played in this incredible state of flow and relaxation. The final move of the game was so easy. It allowed me to win in a way I would've won when I was 15 or 16 years old."

In these :15s, Ahsley offers life lessons on patience and vision:

The work drops this week as part of Droga/Hennessy's long-running "What's your wild rabbit?" campaign, which over the past decade has focused on notable folks in full-throttle pursuit of their goals, illustrating the cognac's broader theme of "Never stop. Never settle." Past entries have profiled 1920s speed record chaser Malcolm Campbell and Black cyclist Major Taylor, who set numerous world records in the 1890s, among others. This mark's the brand's first "Rabbit" foray in two years.

"They've always focused on physical achievements—this time, we wanted to tackle the mind," Droga5 global head of art Alexander Nowak tells Muse. "Maurice's achievement is incredible. He's the chess equivalent of one of those footballers who starts off playing outside their house, then goes on to win the World Cup. And he did it all through the rigorous training of his brain, grappling for years until he became a world beater. He's also a Black man who has become renowned for his intellectual excellence. That's something we don't see recognized enough in our culture."

What's more, "unlike many of our previous subjects, he's alive, so we had the privilege of spending a lot of time with him and having him consult on set, training our actors until they looked like the real thing," Nowak says.

Below, in a discussion that's been condensed and edited, we speak further with Nowak and Droga5 creative director Thom Glover about the campaign:

Muse: How'd you propose the concept of Maurice?

Thom Glover: Getting Maurice to agree to come for a meeting was quite a protracted process. But when he heard the script and saw the level of research we had done for this particular chapter of his life, the whole mood changed. There was a sense of real excitement. He said, "Thank you. You've understood what I've spent my life trying to do," and he brought in his mentor, Willy "Pops" Johnson, to teach us the ways of the Black Bear School. Johnson also features in the documentary, and Maurice had a hand in developing every aspect of the campaign. He's a hard taskmaster, though. When that rigorous mind is trained on you, there's zero room for sloppiness. With Maurice, everything has to be perfect.

Can you give me an example?

Alexander Nowak: On the first day of rehearsals, Maurice was appalled by some of the actors' lack of style on the board, telling us, "These guys don't even know how to sit." However, under his tutelage, they each advanced to look like tournament-level street players when it mattered. A lot of it is about speed. In blitz chess—the high-speed variant played in the New York City parks—you can't give away a second or you'll lose. So you really do have to move "head to hand to piece to clock" like it says in the V.O. By the end of the shoot, none of us had quite managed to perfect Maurice's skill where you take an opponent's piece and remove both pieces from the board in a single snap of the fingers—you see the trash-talker pull that off at 0:42. But thankfully, we weren't the ones on camera. 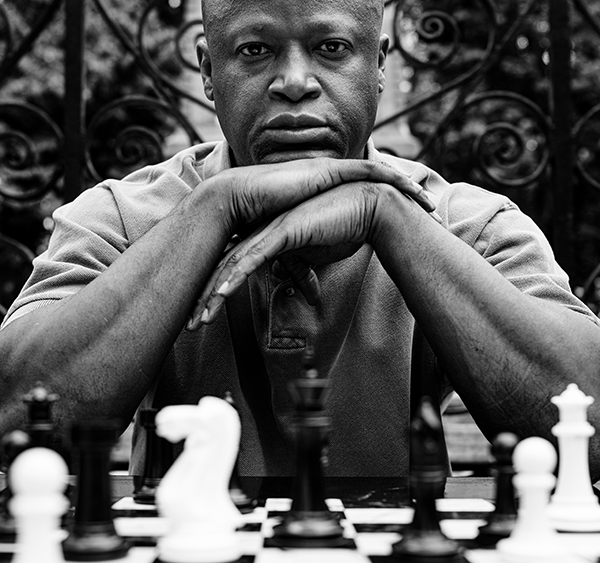 Glover: Alex [Nowak] had worked with him before on Hennessy's "The Piccards" [a previous "Wild Rabbit" installment about a French scientist and his son who probed the limits of sky and sea]. He created an amazing atmosphere evoking the silence of the stratosphere and the ocean trench. But I had really wanted to work with him for a long time because of a different aspect of what he does.

In some of his early music video work—for Chase & Status, the Shoes, Paolo Nutini—you see his magpie's ability to pull together flashes of all these diverse stimuli like sounds, camera speeds and film-looks and turn them into a coherent whole. The end result feels somewhere between documentary, fiction and memory. It's maximalism, I suppose, but no one else really does it like he does.

And for this story, that needed to be about the development of a genius's mind and all the different influences that went into that development—from hip-hop to martial arts, from video games to Basquiat to Mozart—Daniel just felt right.

Was it a challenge to so faithfully recreate the ambiance of early-'90s NYC?

Nowak: Somesuch's art department and our incredible art director Jason Gold scoured reams of imagery of the times for the looks of the Black Bear School—which is a particular kind of Brooklyn early-1990s wardrobe, different from the more widely celebrated New York hip-hop style of a few years prior. A lot of the clothes had to be specially made. Others were sourced from an incredible historical archive in Los Angeles specially for the shoot.

We also wanted to pepper the spot with things that made this unique to the group it depicts and their interests. If you look closely, you'll see that some members of the Black Bear School wear symbols that relate to senet, the ancient Egyptian precursor of chess, from which the modern game sprang.

The beats really heighten the experience.

Glover: The music and sound design took months of obsessive geekery. The idea was to replicate the feeling of the mixtapes that Maurice and his friends would pass around in the early '90s. But instead of loading the spot with the sounds of the time, we wanted it to encapsulate all of the musical influences that went into building Maurice's mind: the hard-bop jazz that the older guys in the Black Bear School used to play from beat boxes during matches; the beat styles of the big New York hip-hop producers that you'd hear blasting from car stereos; and themes from the Japanese monster and martial arts movies that Maurice would watch as a young man.

We loved the idea of soundtracking the film the way a producer like Madlib makes records, where five seconds of a track can mix traditional jazz, Brazilian prog and Saturday morning cartoons. Some of these elements proved non-licensable, however, and had to be approached laterally. But we hope that sense of wildly eclectic influences building up to a satisfying whole remains.

The spot's haunting musical crescendo, when Maurice wrests control of his own mind and becomes a champion, is a part of the "Confutatis" from Mozart's Requiem. It's a piece that means a lot to Maurice because of the way it's used in Amadeus, which is his favorite movie—a story about the development of another genius's mind.

Nowak: Over four days and nights in Mexico City in October of last year, on a series of sets built around a small park that had been brilliantly dressed to look like Prospect Park in Brooklyn. There was a perfectly recreated bodega made up to mimic the one in the background of the iconic 17-year-old Biggie Smalls freestyle video.

The walls had been graffitied by legendary Brooklyn street artist Chino, and every bill post and piece of signage had been painstakingly reworked using the styles of the time by designer Fraser Muggeridge.

The room that you see in the sequence with Maurice and the bucket drummer, where he retreats into his mind, was daubed with chess moves and senet symbols to make you feel like you're inside a Basquiat painting.

Chess can be a slow, quiet game—not so here, right?

Glover: You have five minutes total to make all your moves. Run out of time, you lose by default. So, if you're making 25 moves in a game, each one needs to be completed in less than 12 seconds. But you might find you need a whole minute to reconfigure your strategy at some point, so you don't take 12—you move as fast as you possibly can. You have to build an economical style.

Players attack each other with rapid-fire combinations of moves. They talk trash. They blow smoke all over the board to distract their opponent. For good matches, crowds gather round the board and shout and barrack. It's gladiatorial. We wanted to shoot it to feel like boxing, because that's the sense the players have when they're playing. It's mental combat.

Did I spy a Hennessy wild rabbit as a chess piece at one point?

Nowak: The rabbit is our ambition, the unique thing that each of us is trying to catch. For Maurice, his wild rabbit was becoming a grandmaster, but also gaining command of his own mind in the pursuit of his goal. Look closely at Maurice's mental journey to greatness and a few more wild rabbit moments might just appear. The mind is a complex organ. It doesn't hold things in isolation. It mixes them up. So, for Maurice, the sounds of the video games he played and the martial arts he practiced were the soundtrack to his defeats. And the bucket drummer from the park becomes the driving rhythm in his moment of turmoil in the mental "Basquiat Room." It's the most multidimensional story we've told for Hennessy. It's been a wild ride.