HandsAway's Vivid Posters Remind Us (Again) What Is Not Consent

Crazy how unclear this still is!

#MeToo has given us one cool thing, at least in Paris: Consent education literally lines the streets. And it's enlisted some serious designers!

Here's the latest. For HandsAway, an app that enables women to report sexual aggression or harassment in real-time, TBWA\Paris created "This Is Not Consent." The campaign, print and press-based, is based on IFOP 2018 data that found 86 percent of women have reported receiving street harassment.

The brightly colored ads were shot by American photographer Shelby Duncan, creator of the photo project "Wild Things." They depict women in "provocative" positions. Sometimes they're baring skin; other times they are alive and moving—but ooh, a pantyline! Each shot is labeled, "This is not consent." 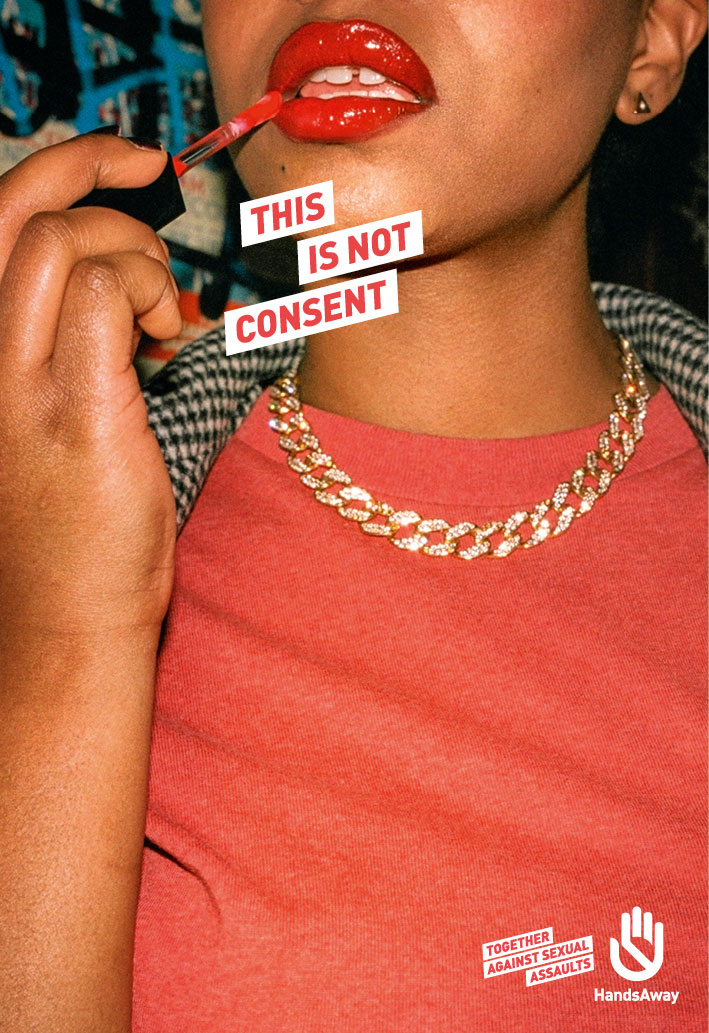 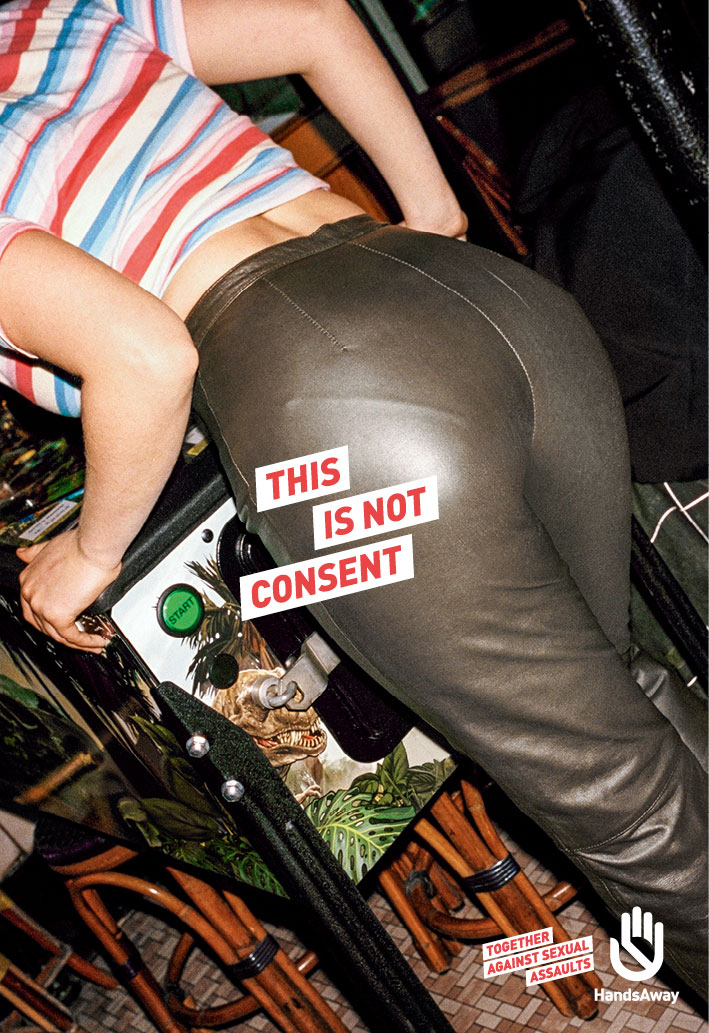 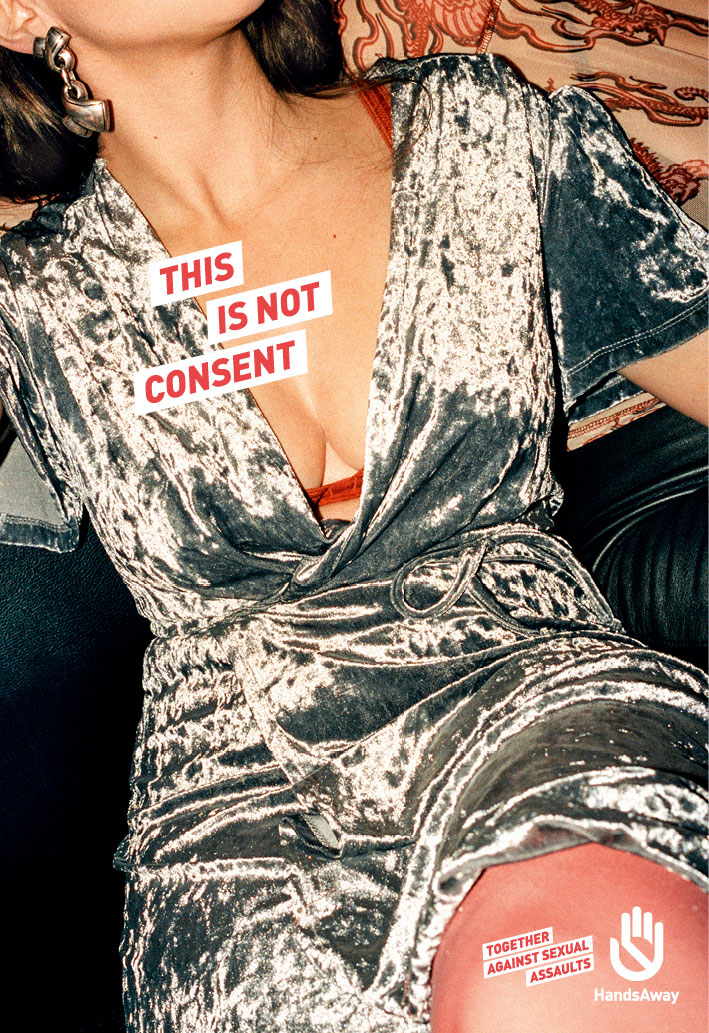 HandsAway's goal is to provide an expedient and less traumatic means to report stuff that just shouldn't happen, except it does, and usually assaulted women are blamed—which makes them even less likely to report experiences to law enforcement.

We're reminded of the hoops the legal system jumped through to minimize the aggression toward Chanel Miller, but the problem begins well before it even happens: It's cultural.

Last year, the Independent found that 55 percent of polled U.K. men feel the clothes a woman wears factor into decisions to harass or assault them. A Brussels-based exhibit, which took place around the same time, titled "What Were You Wearing," showcased the clothing people wore at the time of their assaults, and it defangs the belief that victims are somehow complicit in their own attacks quite brutally: Clothes range from police attire to a child's school uniform.

The Independent's study also reported that 41 percent of women do feel that revealing clothes invite unwanted sexual advances—which kind of sounds like acceptance of a de facto rule, except for two small niggles: Who defines "revealing," and why is it always easier to police women's clothes than punish actual bad guys?

Anyway, this is an annoying pestilence that HandsAway's "This Is Not Consent" hopes to rid us of. Regardless of what you wear, your clothes are never an invitation for someone to shame you at will, touch you without consent, or go on touching you if consent is withdrawn.

The concept owes a pretty massive debt to Belgian photographer Charlotte Abramow, who in 2018 created a similar piece, also titled "This Is Not Consent." It was used as promotional material for a Richard Taittinger gallery exhibit called "The Female Lens": 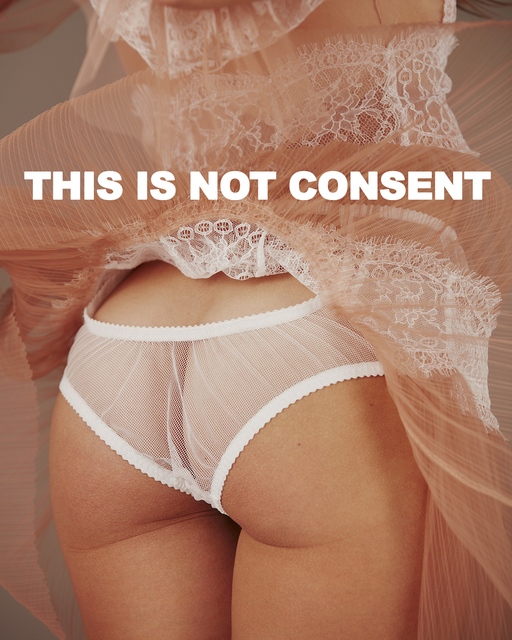 See the posters in this video, which is in French, but this site sums up much of what she says.

That campaign's just ended, so HandsAway's own "This Is Not Consent" follows strong and similarly themed work, which itself builds on a pretty prolific year for both Abramow and consent. This feels like less of an opportunity to shout "Copycat!" and more a chance to embrace the fact that the message is sticking around a while longer, beautifully shot, and in extremely public spaces.

See more posters below. Again, for clarity, these pieces were conceptualized by TBWA\Paris and shot by Shelby Duncan. It is quite close to, but not to be mistaken for, the work of Charlotte Abramow, whom we just fangirled all over. That we fangirled should not be read as a preference in any way. We're just huge opportunists. 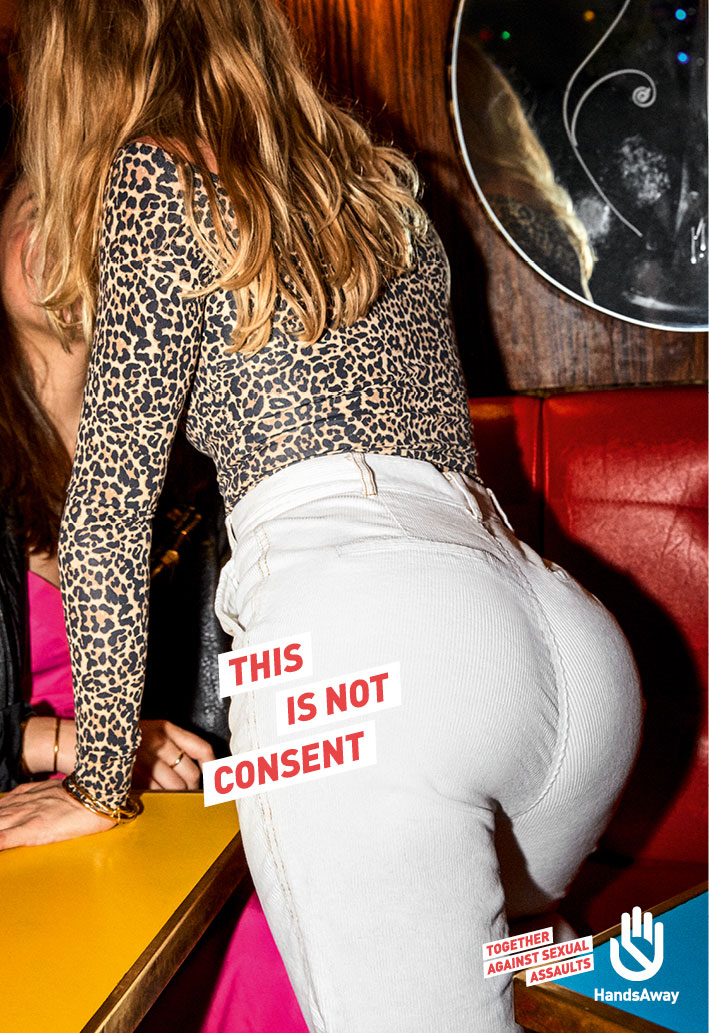 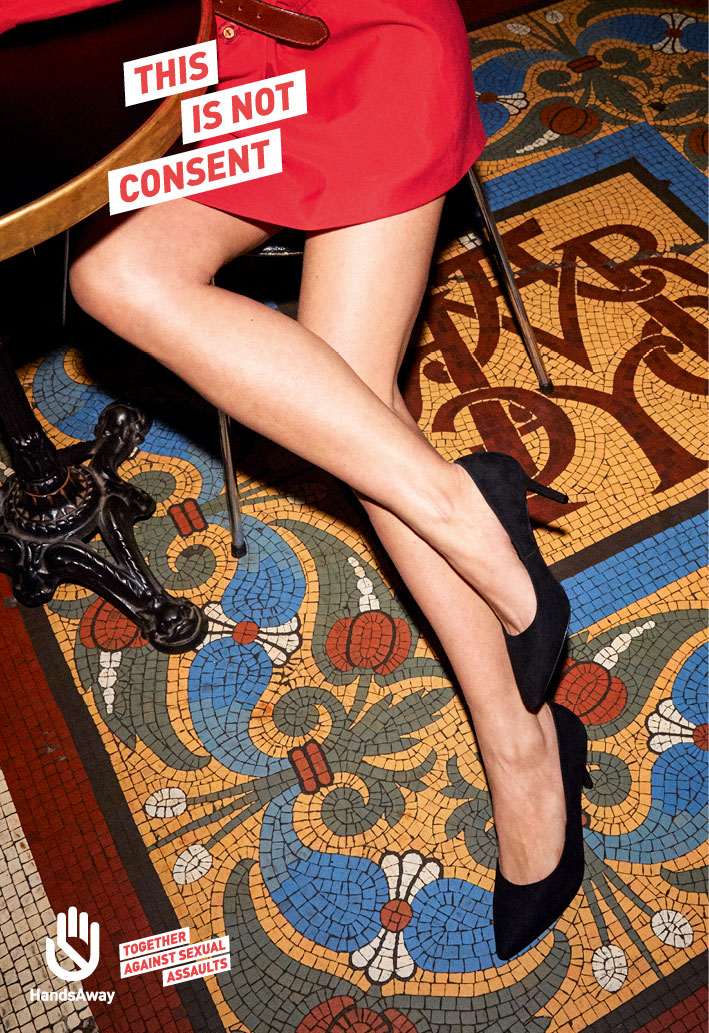 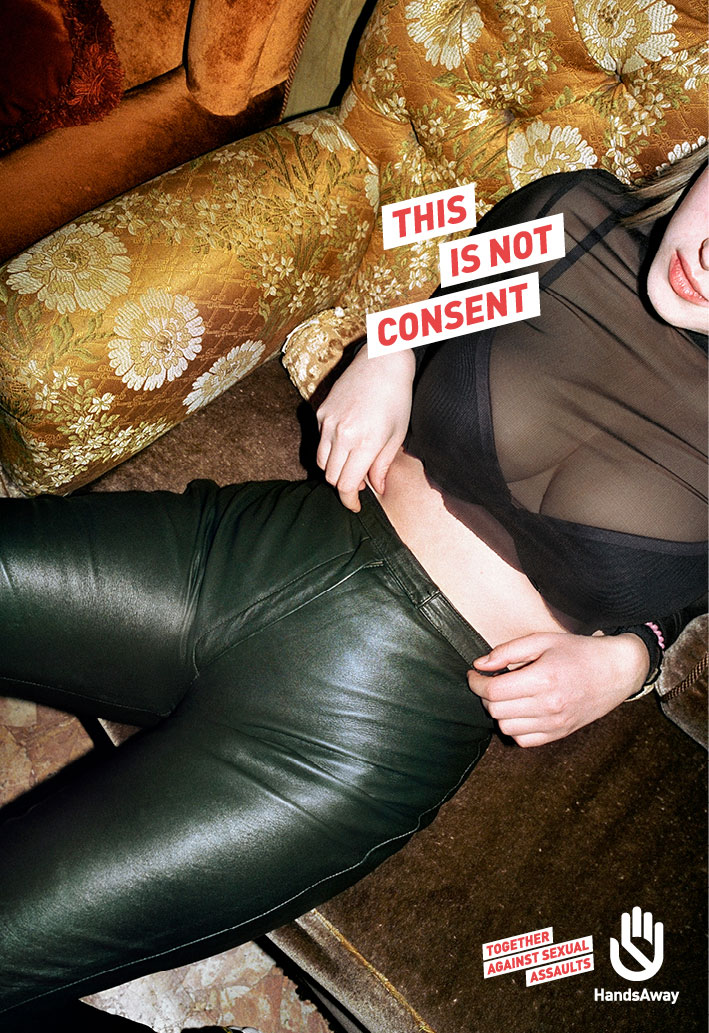 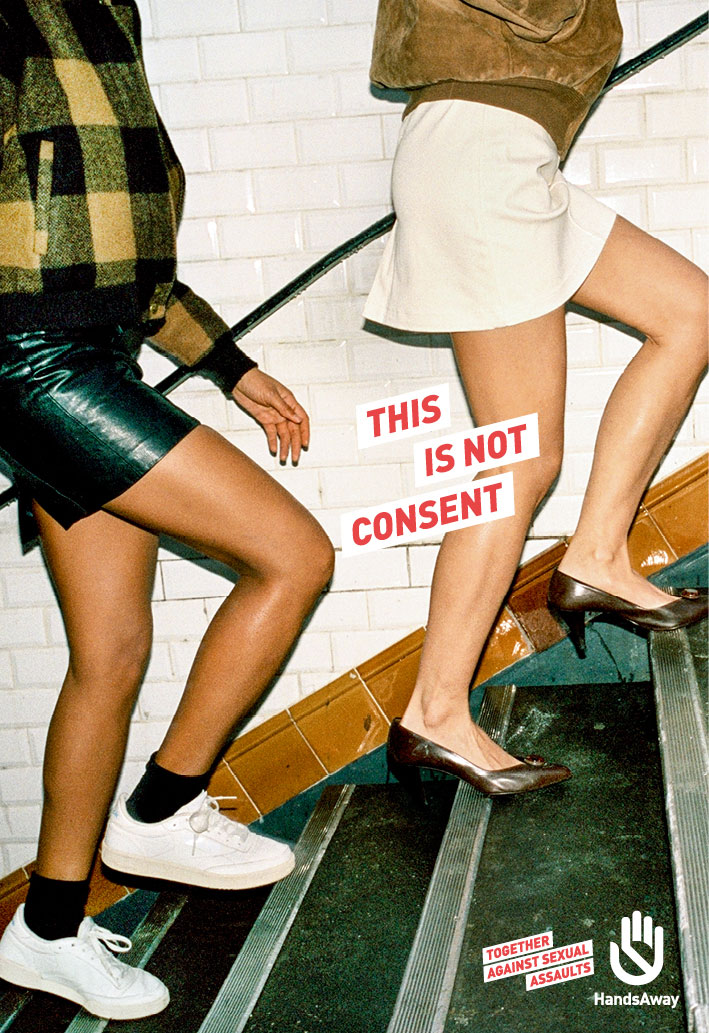