In Fun Transit Ads, Policygenius Revisits a Future That Never Was

Because you never know what tomorrow will bring

It's nearly 2020. Who plans to spend the new year teleporting far and wide, reviving frozen relatives for family reunions and hanging out in vacation domes on Mars?

The answer, of course, is no one. For now, such wonders exist exclusively in the realms of the imagination and science fiction. But 60 or 70 years ago, the notion of taking interplanetary jaunts and defrosting Aunt Tilly seemed like a distinct possibility by the 21st century. (Hey, we've got Roomba. That's pretty rad, right?) 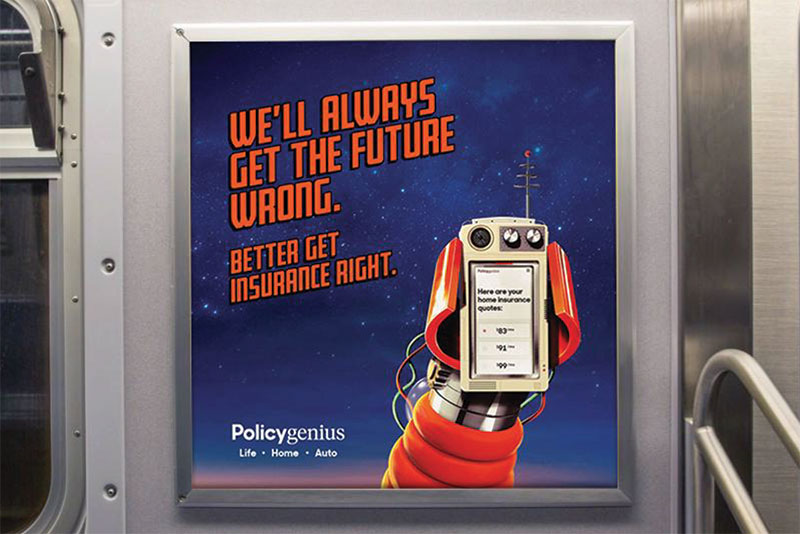 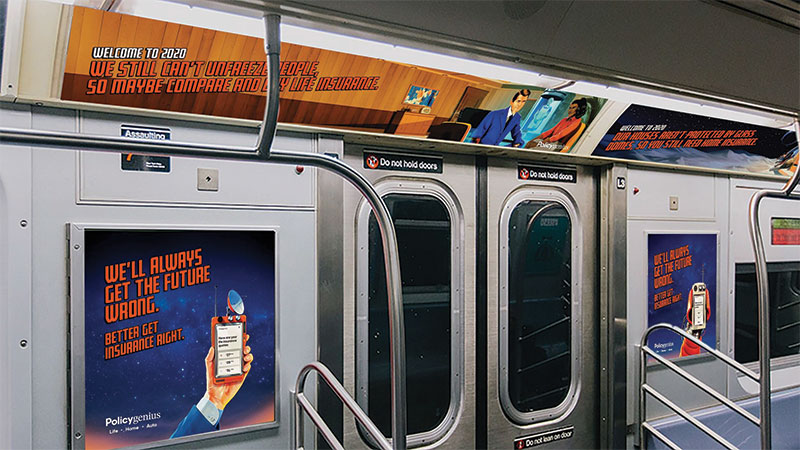 "Insurance exists because the future is unpredictable," Policygenius creative director John Downing tells Muse. "And if there's one year we've been mis-predicting for decades, it's 2020. We help insure your car that doesn't fly, your home that's not on Mars—and because humans aren't immortal yet, we'll find you the right life insurance, too."

The company attracted significant attention in 2017 for decorating subway cars with insurance-themed poetry. In this new push, the brand chose retro-futurism because "its distinct aesthetic lends itself to a variety of channels," Downing says. Podcast, radio and social media ads are also in the mix.

As for returning to underground transit, "the average subway ride is 20 minutes," Downing explains, "so you get more time and attention from your audience than, for example, a highway billboard. And if there's one thing New York City commuters don't want to look at, it's each other."

During the concept phase, the team discovered that "many of the pioneers of the retro-futurism style have retired or passed away," Downing says. "So, we found Cesar. He's capable of a wide range of styles and instantly understood what we were going for—to take the boundless optimism of the '50s and '60s and pour a little cold water on it."

"Our goal for this campaign is to remind people of who we are, what we do, and hopefully give them a bit of a chuckle in the process," he adds.