Upside Foods addresses the main beneficiaries of its lab-grown products 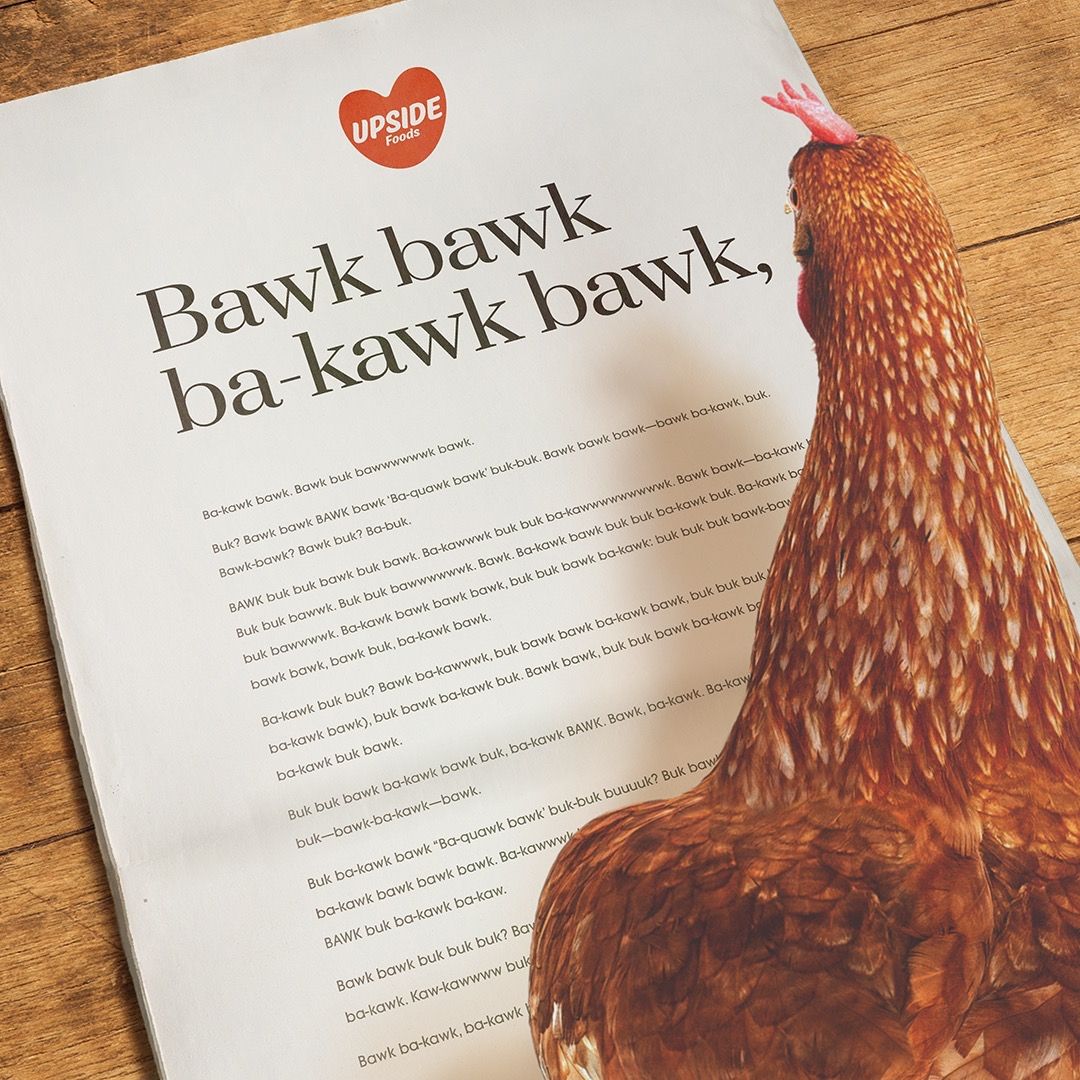 It's usually not great if your print ad is unintelligible. But in this case, it's perfect.

Upside Foods, makers of lab-grown chicken, placed a full-page ad in The New York Times on Friday that's totally written in the language of chicken—and indeed, is aimed at chicken readers. That's because Upside has great news it wants to deliver to chickens directly—that the FDA this week sent the company a "no further questions" letter, signaling it believes its products are safe to eat. This could mean, down the line, many more people consuming lab-grown chicken (harvested from chicken cells) and fewer eating actual slaughtered chickens.

English speakers not fluent in chicken can scan the QR code, or visit upsidechickenletter.com, to see the same ad written in English. "In the future, we might be eating just as much meat as we always have. But a lot fewer animals are going to have to suffer for it," Upside Foods founder and CEO Uma Valeti writes in the letter. "We wanted you, the chickens of the world, to be the first to know. And we hope it brings a smile to your beaks." 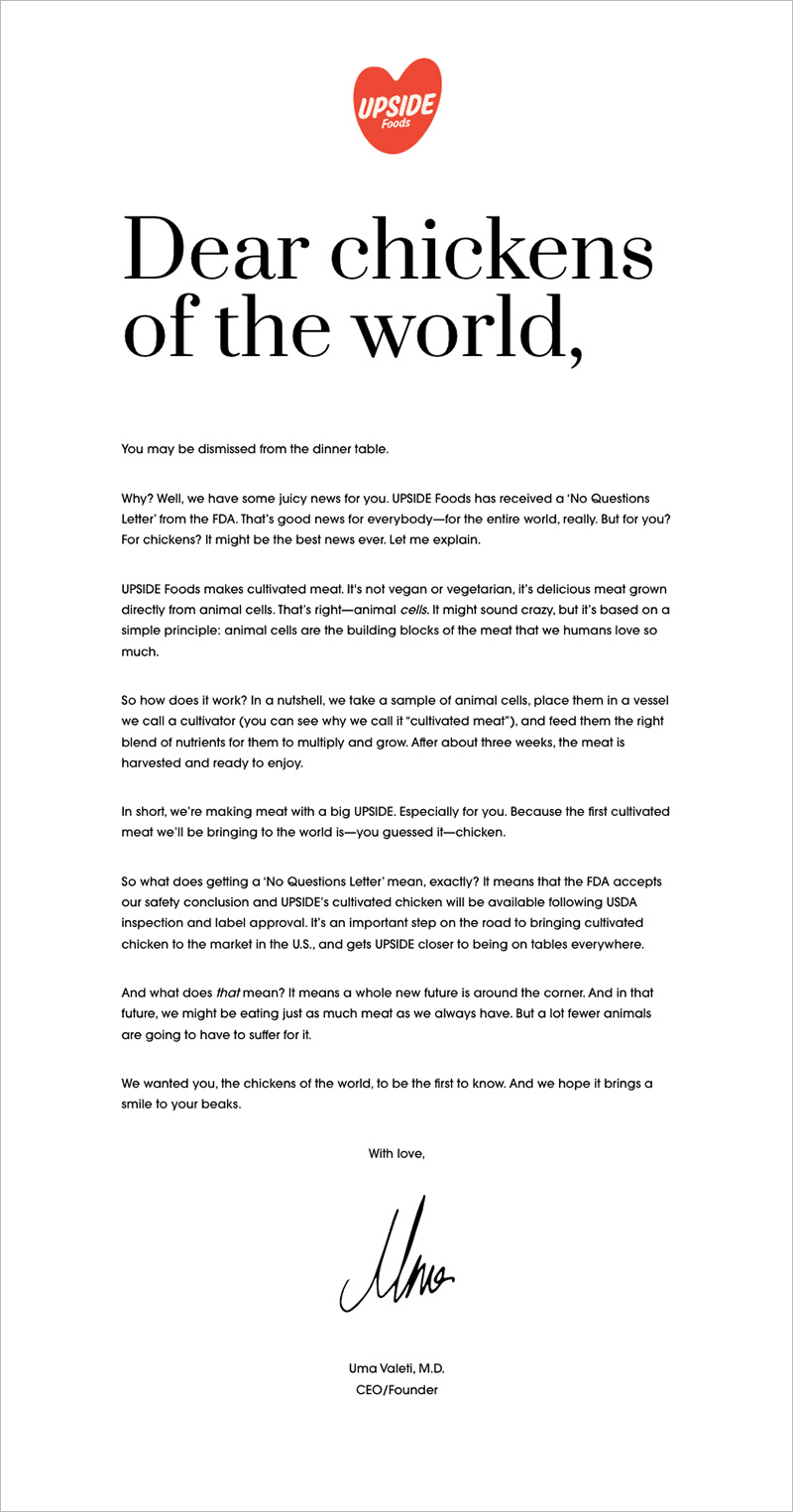 Even as gibberish, the copy is amusing—with words lengthened or emphasized, giving the sense of an impassioned narrator. The "Kaw-ka doodle-doo" signoff is a nice touch, as well. The Rethink team spent a good amount of time coming up with a language that wasn't just some tossed-off chicken scratch. "The fun—and the challenge—with this idea was, of course, we had to invent what 'chicken language' is and what it's going to look like written down," Rethink copywriter Justin Santelli tells Muse. "So we started by actually listening to a loop of chicken sounds on YouTube and transcribed what we thought the different noises sounded like. Then we created paragraphs out of those chicken noises, complete with punctuation and paragraph breaks to visually match the 'English translation' as closely as possible."

For a company like Upside Foods, this kind of approachable tone isn't just fun—it may be strategically helpful in easing anxieties around the product. Lab-grown foods have always seemed a little freaky, even in science-fictional portrayals, such as the "ChickieNobs" in Margaret Atwood's novel Oryx and Crake.

As the Times itself noted in a story this week, "There is uncertainty about whether people will be willing to eat meat that was made in a lab, particularly considering consumer reluctance around other technological leaps in the past, such as genetically modified foods." 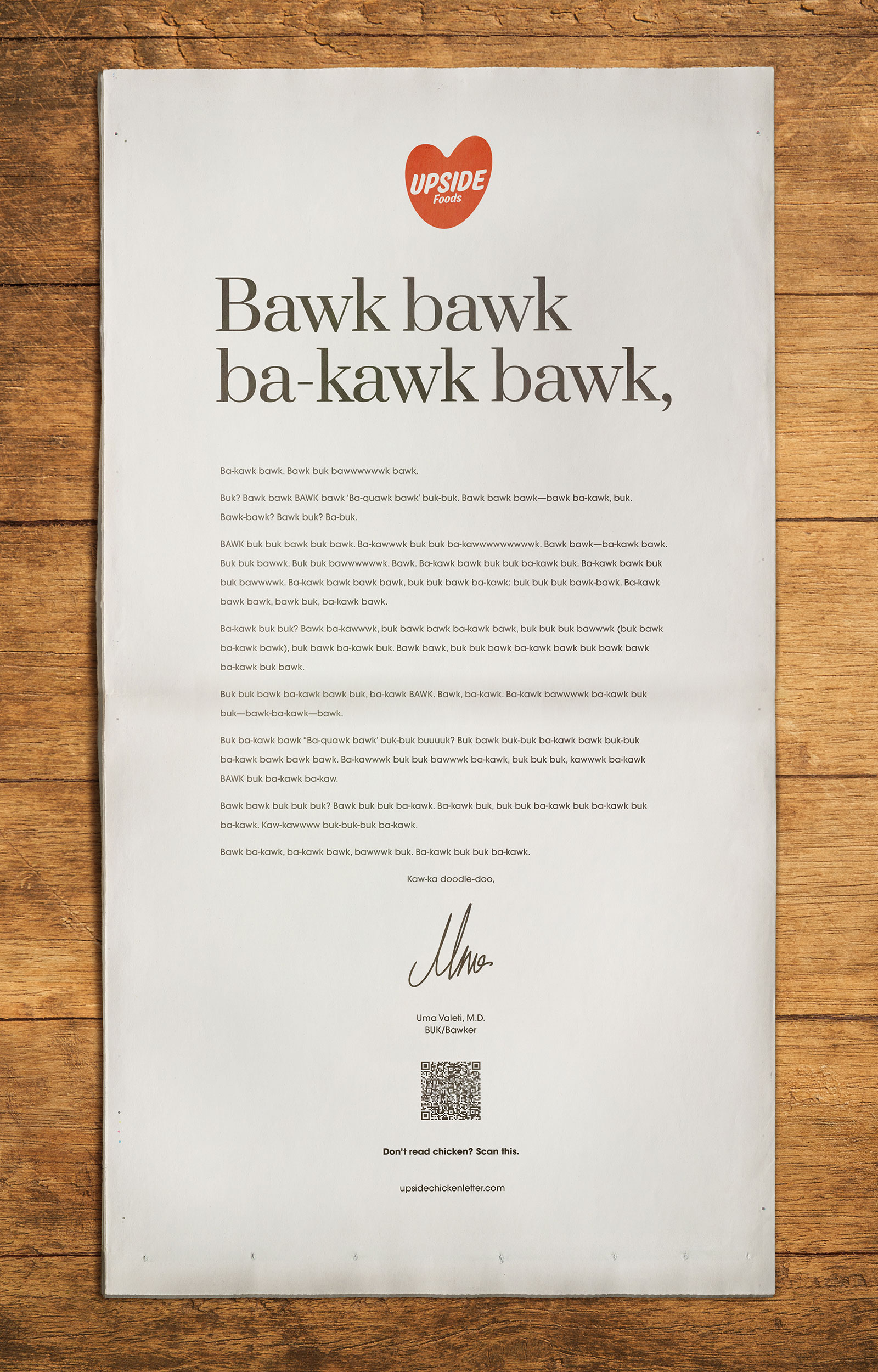