Fernando Machado on the Making of 'Moldy Whopper,' Burger King's Craziest Ads Yet

Burger King on Wednesday delivered its latest jolt of creativity to the ad world. And it couldn't have been more gnarly looking.

To communicate that BK is moving away from using preservatives from artificial sources, the brand released images showing what happens to real food without them—it quickly rots and grows mold. The gloriously gross shots of the "Moldy Whopper" will be appearing in ads globally, and made quite the stir in social today.

Even for a brand known for its risk-taking, "Moldy Whopper" is quite a remarkable creation. It's hard to image the product in a less flattering light. Yet BK CMO Fernando Machado says he couldn't be more excited about unleashing these images on the world. 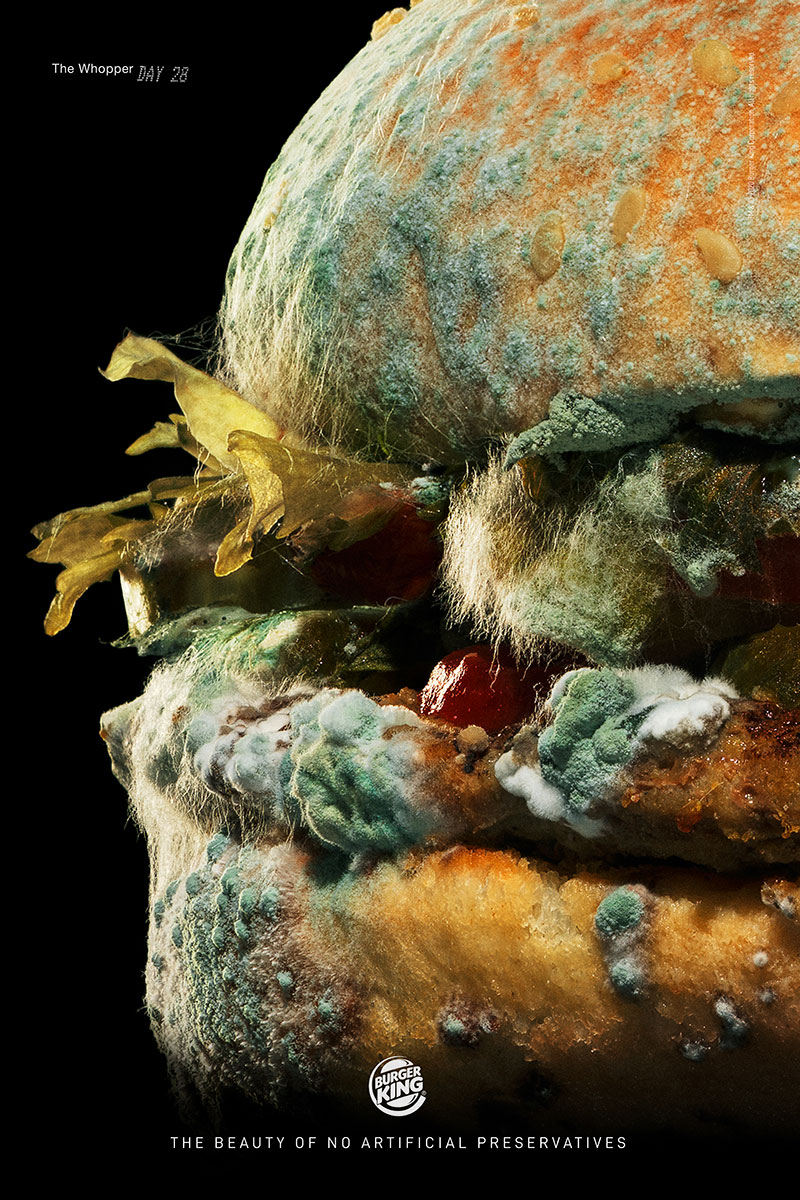 Muse chatted by phone with Machado early Wednesday afternoon to hear all about the campaign's conception and execution—from an idea that actually came from multiple agencies independently, to the execution, which had to be perfect for the concept to work. Our full conversation is below.

Muse: Busy day for you today!

Fernando Machado: It has been an intense day here today. But we are extremely excited about this one. Not just because of the campaign but because of the product work behind it.

Well, first off, you realize this is not how you're supposed to advertise food.

[laughs] But that's the thing. Usually, the way you're supposed to advertise something tends to not work well for us. I don't have the media money to throw something at people that's not going to stand out or get noticed. In this case specifically, we were expecting some controversy and debate. But the reality is, the press has been largely positive. And in social media, I think people got it. It has been extremely positive. But yeah, we knew we were breaking some rules when we came up with this one.

It certainly fits your playbook of taking risks. But it goes further than you normally go, in portraying the product at its least appetizing.

I agree, and that's why I'm so excited about it! One of the key creative challenges we have is: How can we keep raising the bar, setting new limits and keep stretching—not just the brand but the way we communicate a message? Had we gone out there and just said, "Hey, now the Whopper is free of colors, flavors and preservatives from artificial sources, look how beautiful it is," and someone takes a bite of the Whopper, and everyone smiles at the end, and I put the Burger King logo on there—no one would care. You wouldn't be calling me to talk about that. Or you would call me to complain that I did a lame ad and you were expecting more from Burger King.

But I think we've paved the way for this. We understand that the biggest risk is to do something people are not going to notice or care about. We took a leap of faith and pushed the boundaries further than we normally do for BK—but for a good cause. We've been working on removing preservatives from artificial sources from our products for many years now, and we've started to reach some of the key milestones where we're comfortable talking about the changes publicly. So, we needed something special. When we saw "Moldy Whopper," it was love at first sight. 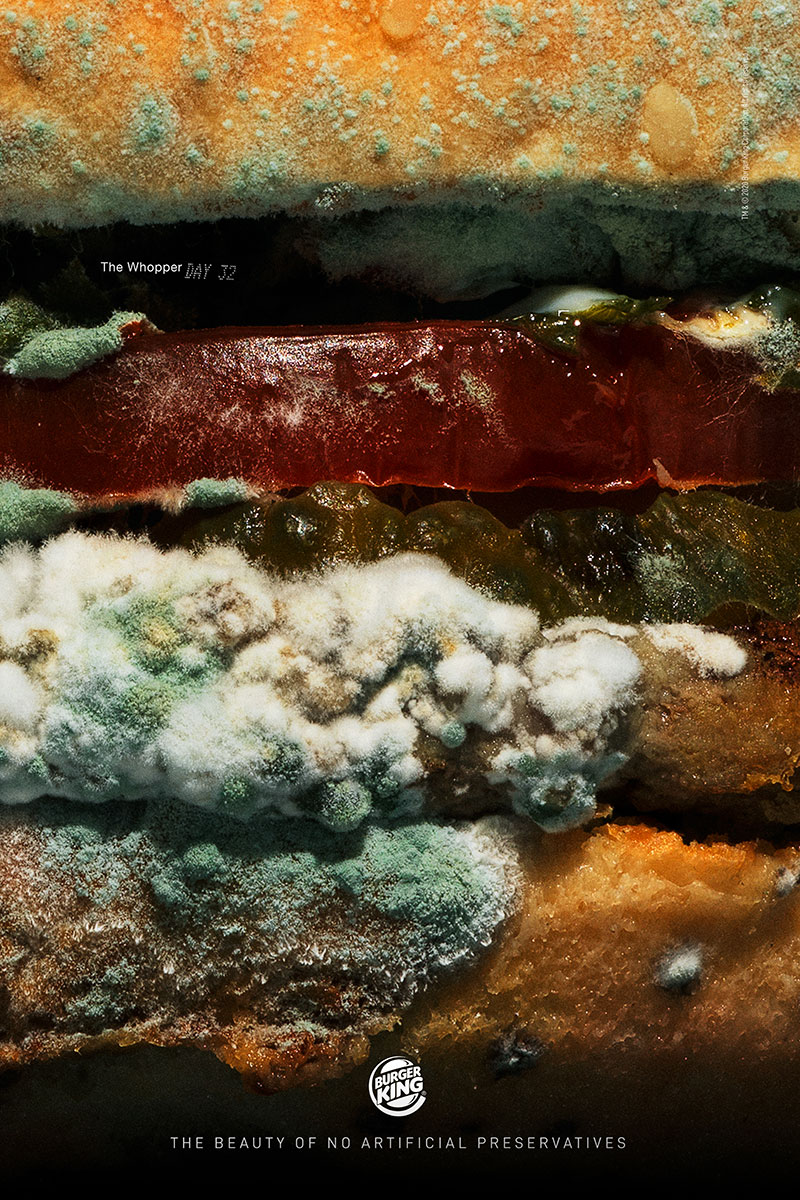 The idea came from Ingo in Sweden?

A different version of this idea was presented to us by David Miami two or three years ago. It was a different version, and we were not ready to do it. The products were not at the stage we needed. Then, around nine months ago, the crazy Swede Björn [Ståhl, executive creative director at Ingo] and the awesome BK Sweden team came to us with a bunch of different ideas. One of them was a version of "Moldy Whopper," a much closer version to what you are seeing today. We fell in love with that and said, let's go make it happen.

We had David and Ingo—they are sister agencies anyway—collaborating and helping each other, with Ingo taking the lead in producing everything. And then, at some point, Publicis—which also works with us in some countries in Europe—shared a version of this idea with us, by coincidence. Sometimes these things happen. And there were some aspects of how Publicis was going about it that we liked. So, we took one piece here, one piece there. And we listed all three agencies in the credits. But I would say Ingo is the lead agency on the idea, and they produced it from beginning to end, with some support in different aspects from David and Publicis.

The images are disgusting but also weirdly beautiful. How important was the execution in making this work?

I think it's all about the craft. The essence of the idea is to show something that you know, in theory, is bad—mold—but it's shown in such a beautiful, stunning way and you're talking about it as a positive. So, for the execution for work, the craft is key. Usually that's the case in general, but in this case specifically, the beauty of the craft is part of the essence of the idea. If it didn't look stunning, it wouldn't work. It almost messes with your mind. You know mold isn't good, but it looks so beautiful! So, it's really important. It took us a long time to get the timelapse right. Björn tells me that he became a specialist in mold. That's true. It was really not easy to do. To make it look so beautiful and so eye-catching, it took time and a strong eye for detail and lots of attention to the craft. 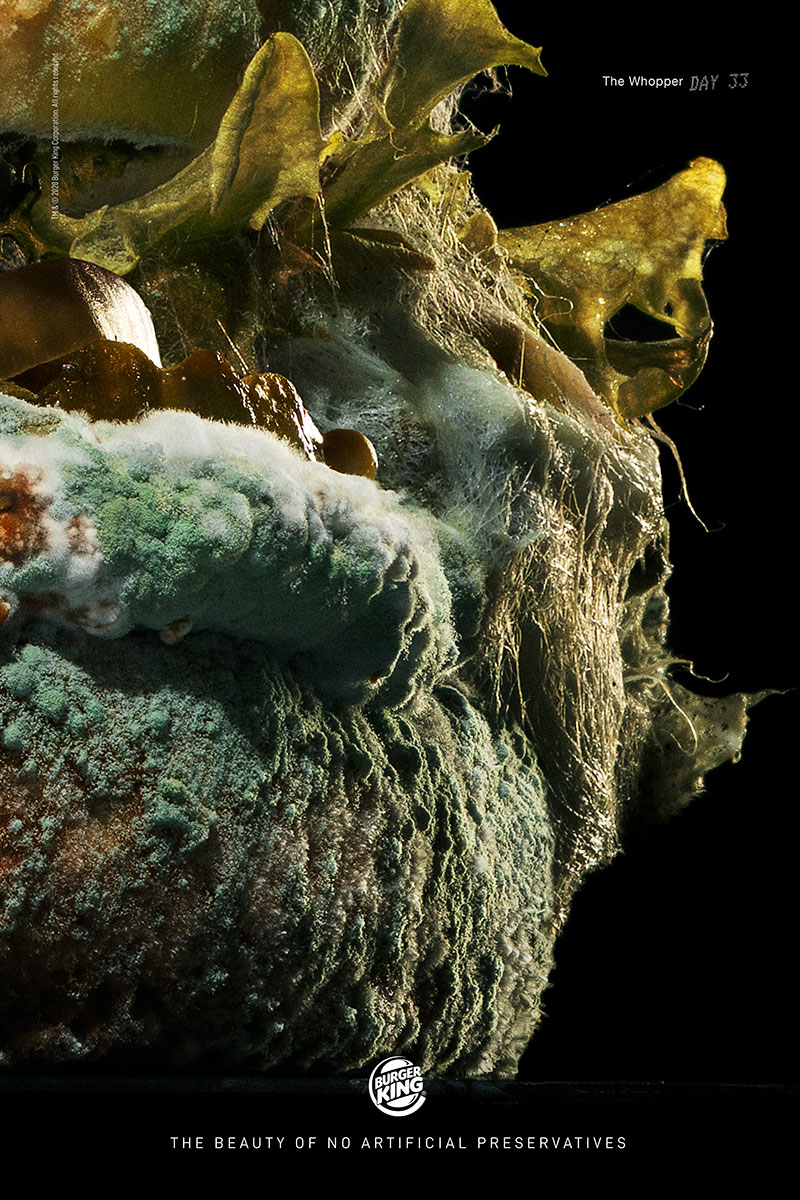 The execution might be shocking, but it fits the trend of brands trying to be more transparent and honest as a way of connecting with the modern consumer, right?

I agree, but I think it's different in how it's done. I've seen so many campaigns where people get very didactic and list, bullet point style, all the great attributes of the product. I think what we are doing here pushes the limits of that. It breaks all the rules about how food should be shot, to make a point about the improvements we are making to the ingredients we are using. That's a bit of a contradiction, right?

Judging from the reaction of people in the industry, and outside the industry, and the feedback we are getting, I feel like we did something special here. Something that pushes Burger King into talking about food quality in a very different way—in a way that most people wouldn't dare to do, but in a way that feels very Burger King. If you think about the brands that could have done this—Burger King is that brand.

At the same time, I think it pushes the limits of advertising, because it breaks so many rules of how things are done, and because it goes in the right direction in terms of transparency, honestly, reality and accountability. I think that's the sweet spot. It pushes our brand forward in a new direction, and in my humble opinion, it also pushes advertising forward. It unlocks something in people's minds, and you see new possibilities for the industry. 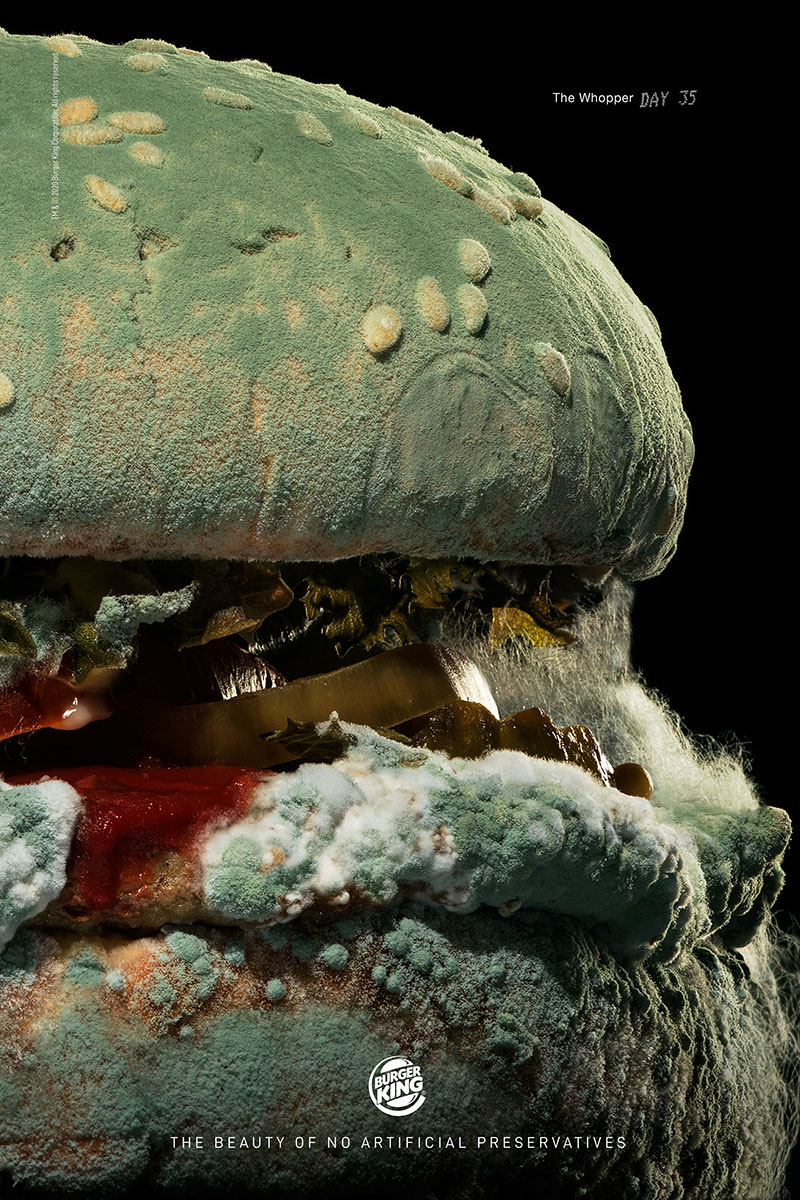 In some ways, in its willingness to show the brand in an unflattering light, it feels like a descendant of "Burning Stores." Would you agree?

I think there is an ingredient of self-deprecation which tends to be common in different executions that we have. I have a twisted sense of humor, but I find "Burning Stores" to be a bit funny. I don't find this one funny, necessarily. This one is more shocking—just as raw, but more shocking—than "Burning Stores." And it required us to make a considerable change in the product. "Burning Stores" was about flame grilling—flame grilling is the point of difference of the brand. It was just a different way to communicate that benefit. This is a new benefit that's communicated in a very compelling, very different, very shocking way. 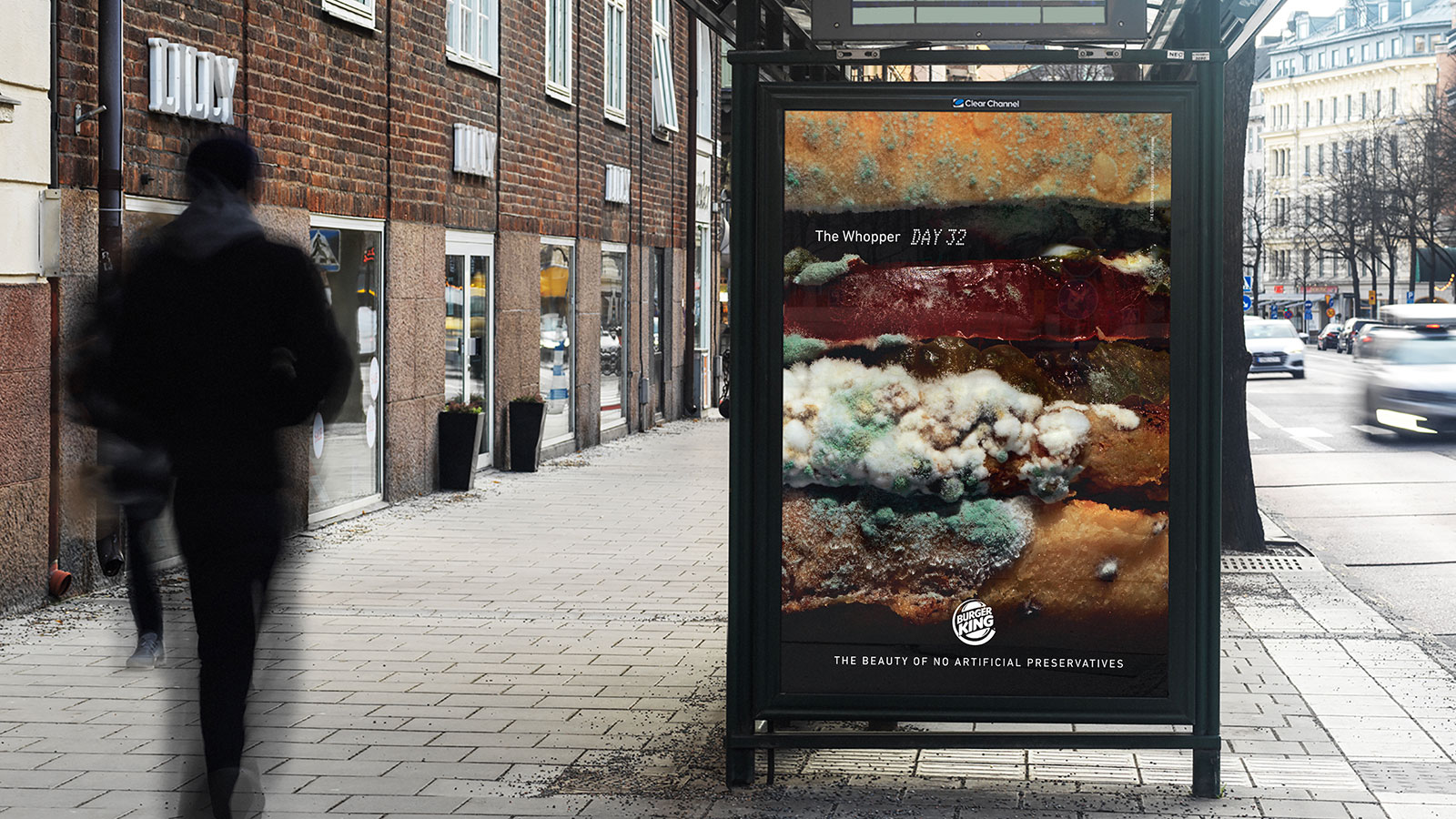 Now that you mention it, what do you say to people who say, "That's so gross, I'm not eating at BK anymore."

I don't think the majority of people will say that. And honestly, if someone says something like that, it's probably just a short-term, instinctive reaction. They will be left with the message that Burger King has real products that use real ingredients, and that we are making an effort to completely remove anything that comes from artificial sources. That, in the long run, will help us capture more business.

Will you be watching the late-night talk shows tonight to see which of those guys talks about this?

Oh my God. They always make fun of us. And we are fine with that, too! We are a brand that's a bit of a prankster. We like to make jokes. So, if you are like that, you need to be willing to be part of the joke, too. And we are totally cool with that. We prefer that to being irrelevant. And in the end, I think people are left with the right message—that we are removing preservatives from artificial sources from our products. Which is something that's incredibly good for everyone. 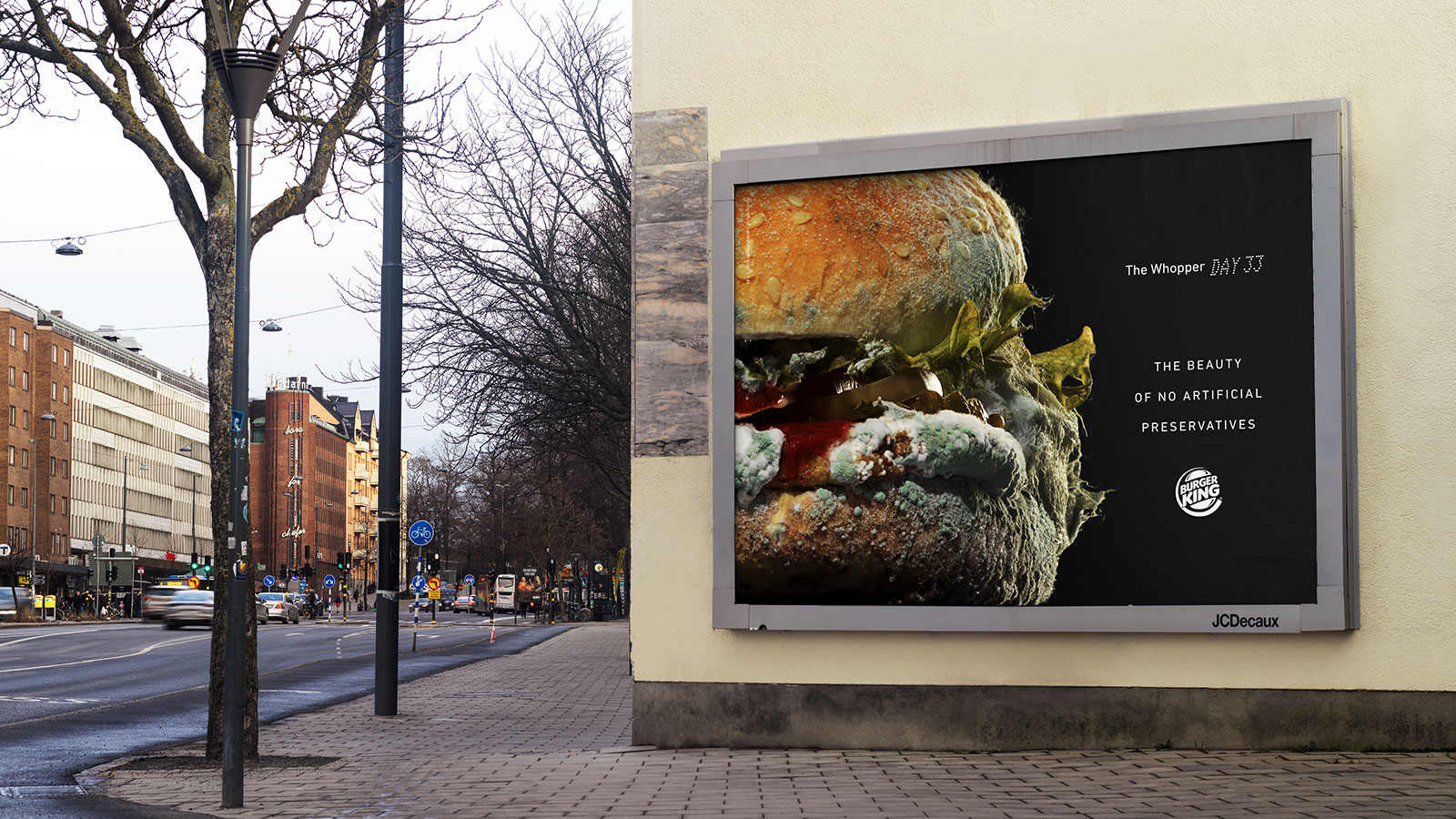